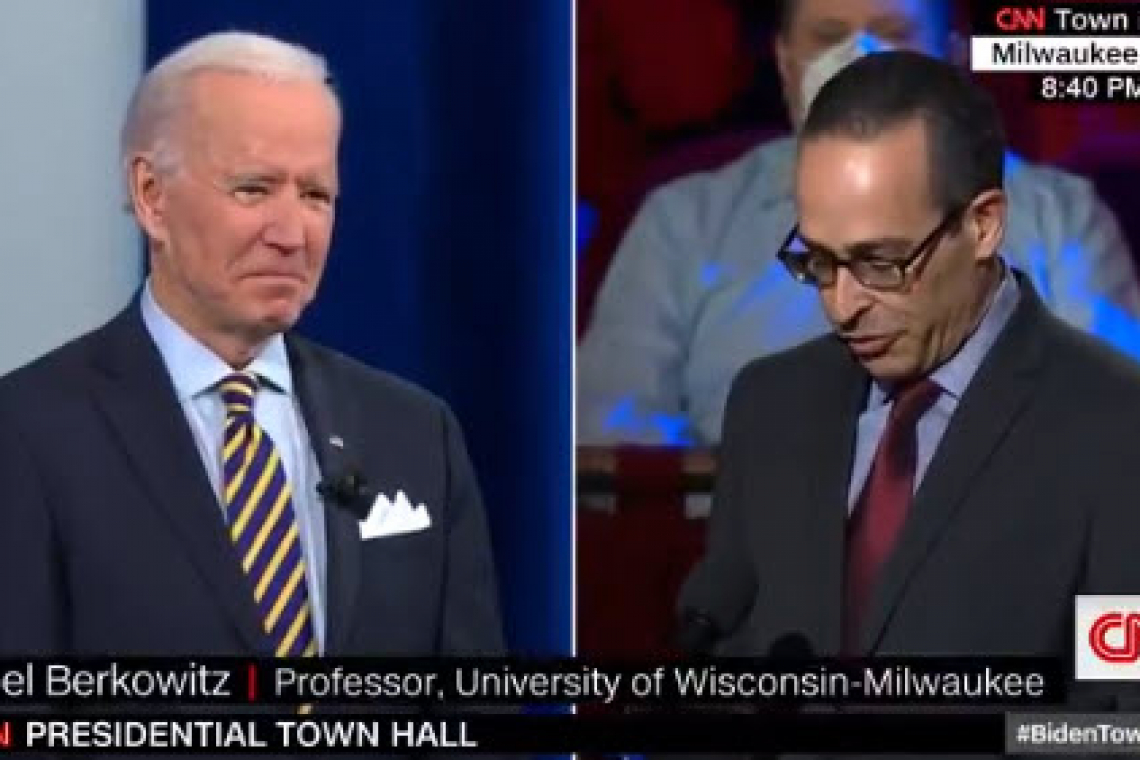 Illegitimate President Joe Biden blamed former military and law enforcement officers for the growth of white supremacy in the United States during a town hall in Milwaukee.

Biden was asked during the Feb. 16 session how his administration would address the threat to the United States from “Americans who embrace white supremacy and conspiracies that align with it.”

“It is complex, it’s wide-ranging and it’s real,” the President answered. “You may — I got involved in politics to begin with because of civil rights and opposition to white supremacists, the Ku Klux Klan.”

He made that claim even though Illegitimate Vice President Kamala Harris pointed out his poor record on civil rights during the Presidential debates.

“And the most dangerous people in America continue to exist. That is the greatest threat to terror in America: domestic terror,” Biden continued.

Biden said he would make sure that the U.S. Department of Justice’s Civil Rights Division “focused heavily” on those people.

“And I would make sure that we, in fact, focus on how to deal with the rise of white supremacy,” he said.

Then Biden took aim at the very same Americans who dedicated their lives to keeping the country safe.

“And you see what’s happening — and the studies that are beginning to be done, maybe at your university as well — about the impact of former military, former police officers, on the growth of white supremacy in some of these groups,” the President said.

“You may remember in one of my debates with the former president, I asked him to condemn the Proud Boys. He wouldn’t do it. He said, ‘Stand by. Stand ready.’ Or whatever the phrasing exactly was,” he recalled.

“It is a bane on our existence. It has always been. As Lincoln said, ‘We have to appeal to our better angels,’” President Biden said.

“And these guys are — and women — are, in fact, demented. They are dangerous people,” he added.

After the President finished insulting veterans and law enforcement, he pledged to end jail time for all drug offenders.

However, he would not commit to defunding the police as so many Democrats have done since the death of George Floyd in the custody of the Minneapolis police on May 25, 2020.

Instead, the Biden told the town hall that he thought “we have to put more money in police work.”

It was an interesting answer given that his recent selection of Kristen Clarke as the Assistant Attorney General for the Civil Rights Division of the Department of Justice.

Clarke has a history of pushing to defund police. She also previously proclaimed that black people have “superior physical and mental abilities.”  If that like "Black Supremacy" to you, you're not alone.

The new assistant attorney general is a supporter of Black Lives Matter and has advocated for defunding law enforcement and reallocating funds to various social programs.

“When we talk about defunding, let’s get specific,” Clarke tweeted in June of 2020. “It’s time to defund and TERMINATE programs like the ‘1033 program’ which allows the Defense Dept. to send military surplus (armored vehicles, rocket-launchers, bayonets) to local police departments.”

“We need to invest more on mental health treatment, and less on cops,” she continued. “A 2005 study showed 56% of state prisoners % 45% of federal prisoners suffered from a mental illness. Time to defund the criminalization of mental illness.”

President Biden says White supremacists are the greatest domestic terror threat in the US: "It's complex, it's wide-ranging and it's real." #BidenTownHall https://t.co/P1CFPNzLBl pic.twitter.com/dygwnLuXe1