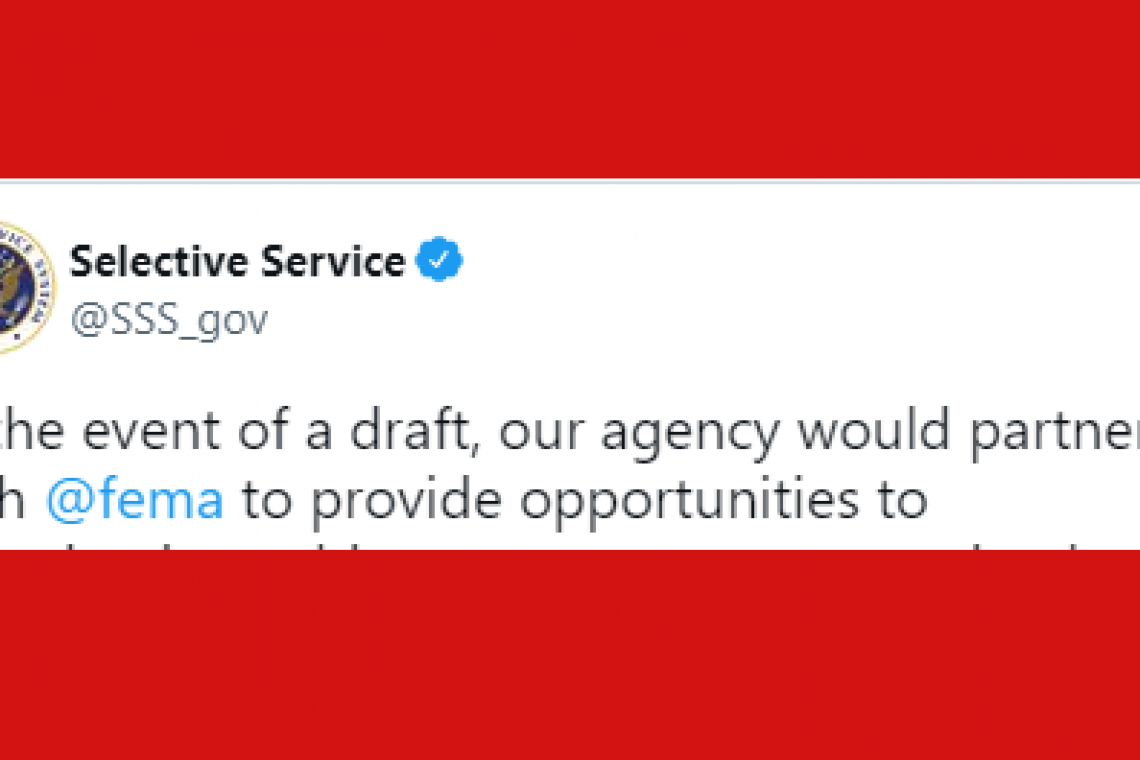 Young Americans just got a very rude wake-up call from the United States Selective Service System.  They Tweeted today from their official account saying "in the event of a Draft . . .

In the event of a draft, our agency would partner with @fema to provide opportunities to conscientious objectors to ensure our nation keeps moving forward. Learn more about Alternative Service at https://t.co/v2MBOkduVe pic.twitter.com/tjDJlCdoKn

Now, most folks instantly wondered WHY they chose to tweet this today?   Why indeed.

"Men between the ages of 18 and 25, inclusive, must register for the draft. However, the U.S. does have provisions that allow for those up to the age of 54 years of age to be drafted if they have certain needed skills or experience."


"How the Draft Works

The U.S military uses a lottery system to select workers, and those between the ages of 18 and 25 inclusive are drafted first. If a draft was authorized by the U.S. Congress and the president, a lottery based on birthdays would occur, and those who turn 20 during that year would be the first inducted. If more men were required, the lottery would start with those aged 21 and continue in order with those aged 22, 23, 24, 25, 19, and 18 years old."

You didn't think that all the mental weaklings out there, who put Pro-Ukraine slogans on their social media accounts, were actually not going to be called-up to fight, did you?

While all the mental weaklings of the Liberal/Progressive Left-wing, put up Ukraine flags, were re-posting Ukraine propaganda about how they are winning the war against Russia, thinking they were accomplishing something, now they'll get to see it all from the battlefield and do it personally, thanks to the DRAFT!

Hey, you soy boys voted for Biden.  THIS is what they're planning for you!

You got what you voted for; morons!