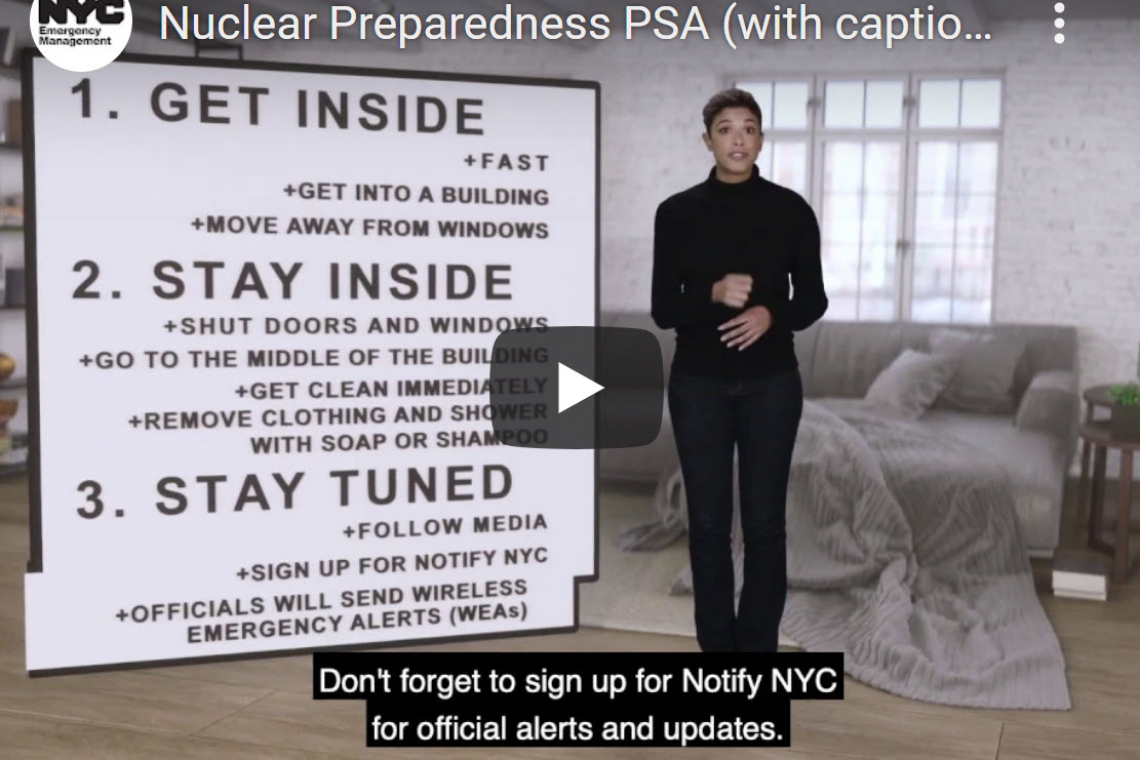 The New York City Office of Emergency Management has issued a video TRAINING NEW YORKERS FOR WHAT TO DO WHEN A NUCLEAR BOMB HITS.

The ninety second video was released this morning, July 11, 2022, appears below.  It is widely believed they have put out this video because THEY KNOW what's coming . . . . because it is the government that intends to cause it.

They are pushing Russia so far with economic sanctions over Ukraine, that the Russians will have no choice but to launch a full nuclear attack because what we are doing is now an existential threat to Russia.

Rather than stop what we're doing, they intend to keep pushing and THEY KNOW what the result will be.

In the video, they tell New Yorkers to get inside.   Good advice . . . if there's anything left standing to actually get inside of!

Then, in the height of utter stupidity, they tell New Yorkers "If you were outside when the blast hit, take off all clothes, shower and shampoo to wash the radiation off immediately."   THERE WON'T BE ANY RUNNING WATER.   The water mains will all be ruptured from the blast and the electric that powers the water pumps will all be off for miles.

But wait, there's more . . .  idiocy . . . . they tell New Yorkers "stay tuned to local media and don't go outside until authorities tell you it's safe."  THERE WON'T BE ANY LOCAL MEDIA.  It will all be blown up.  All the TV and radio transmitters will be wiped out!

As if to add insult to injury, they tell New Yorkers "Sign up to NYC-alerts"  (with your cell phone). . . THERE WON'T BE ANY CELL PHONE SERVICE. The towers will all be knocked down, the transmitters fried by electro-magnetic pulse, and the electric will all be out.  THERE WON'T BE ANY INTERNET SERVICE. All the Internet lines will be blown up and the wireless all offline from EMP or no electricity!!!

Government does not do things like this for no reason.   In this case, THEY KNOW what's coming because it is government that is causing it.

They've been planning a "take-down" of Russia, for decades.  They expanded NATO when they promised Russia they would not move "one inch eastward" upon the re-unification of East and West Germany.  They broke that promise in stages, moving little by little closer to Russia's borders.

So the US and Europe began pouring money into Ukraine to foment and facilitate violent protests; riots in every major city.  Within a year, in 2014, rioters burned government buildings. Snipers were shooting people on both sides to foment more violence.   It got so bad, that Yanukovich had to flee the country and the Ukraine government collapsed.

Who was right there to finance new political candidates?   Europe and America.  So they were able to install a puppet government favorable to the West.

When Russia saw this taking place, they were stunned.  This was happening right at their own border.  The west was overthrowing Ukraine's government because they need Ukraine in NATO.   You see, they want to put American missile defenses on Ukraine territory.   By positioning our missiles there, they would have a flight time of only about five minutes to Moscow.  They would also have a flight time of only 7-8 minutes to Russia's strategic nuclear missile silos.

Russia had to act in its own defense.  They did what our own President, John F. Kennedy did, when Kennedy found out the then-Soviet Union had placed medium range and intermediate range nuclear missiles in Cuba, with a flight time of only 5 minutes to Washington, DC:  Kennedy blockaded  Cuba and began massing troops for an invasion.

Thankfully, both sides negotiated a peaceful settlement to what became known as the "Cuban Missile Crisis."   That was in 1962-63.

Today, the situation is exactly reversed; it is the West trying to put missiles withing 5 minutes flight time of Moscow, and Russia said No.

When Ukraine decided they were actually going to join NATO, and allow those missiles . . . and even began preparing for a NATO naval base on the Black Sea, Russia had enough.

By November of last year, NATO had trained the Ukraine Army for eight years under the West-installed puppet government.  The Ukrainians had also massed about 80,000 troops on the borders of the eastern states of Luhansk and Donetsk (collectively called "The Donbas") - and both states directly border Russia.   So Russia knew Ukraine was prepping its military and its land for a confrontation.  Russia thus had to strike first.  Russia entered Ukraine on February 24, 2022.

Instead of backing off, the West upped-the-ante . . . they imposed crippling economic sanctions upon Russia specifically designed to crush Russia's economy.   The sanctions backfired and are harming the west more than harming Russia.

So what is the west doing now . . . . massing troops in NATO countries along Russia's border.

Russia has said that if NATO and Russia go to war, NATO has superior conventional forces.  Russia admits that.   But Russia also said "Russia is a nuclear power and Russian nuclear forces are superior to NATO."  President Vladimir Putin said publicly, "It will be a war that no one will win."

The only war that "no one will win" is a nuclear war.

NOW, the NYC Office of Emergency Management is publicly telling New Yorkers what to do when a nuclear bomb hits.

Because they know what's coming . . . . because our own government is the cause of it. That's why, in the first few seconds of the video above, they actually tell you 'don't ask why, or how . . . ."   BECAUSE IF YOU START ASKING WHY, YOU'LL FIGURE OUT THAT IT IS OUR GOVERNMENT THAT IS CAUSING THIS! ! ! ! !

It is now clear that the US intends to engage in a nuclear war with Russia.  THAT is why NYC OEM is putting out these warnings.

I cannot even begin to describe to you, the heat I have taken over the past few months, for warning my web site visitors and radio audience that nukes are going to fly.  I was called "crazy" by the public.   My stories were smeared as "click bait."   My sources were derided as "fear mongers."  My radio show was attacked as "scaring the public."

So now that  the New York City Office of Emergency Management is actually telling New Yorkers what to do when a nuclear bomb hits, I wonder if folks might figure out that I've been right all along?

THERE IS MUCH MORE INFORMATION TO PROVIDE TO YOU.  All of it will be broadcast on tonight's Hal Turner Radio Show.  Set an alarm in your cell phone to tune-in

Tune-in FREE via Internet or on radio as follows:

Or here on the Internet at the link below.  (NOTE: That link does not go live until about one hour before show time.  During that hour, it streams commercial-free music until the show begins)

http://stream.halturnerradioshow.com:8000/    (Then click LISTEN or hit the PLAY BUTTON on the small player on that page)