China Orders Millions Along Coastline Near Taiwan, To Make Certain They have "emergency Preps" (War?!) 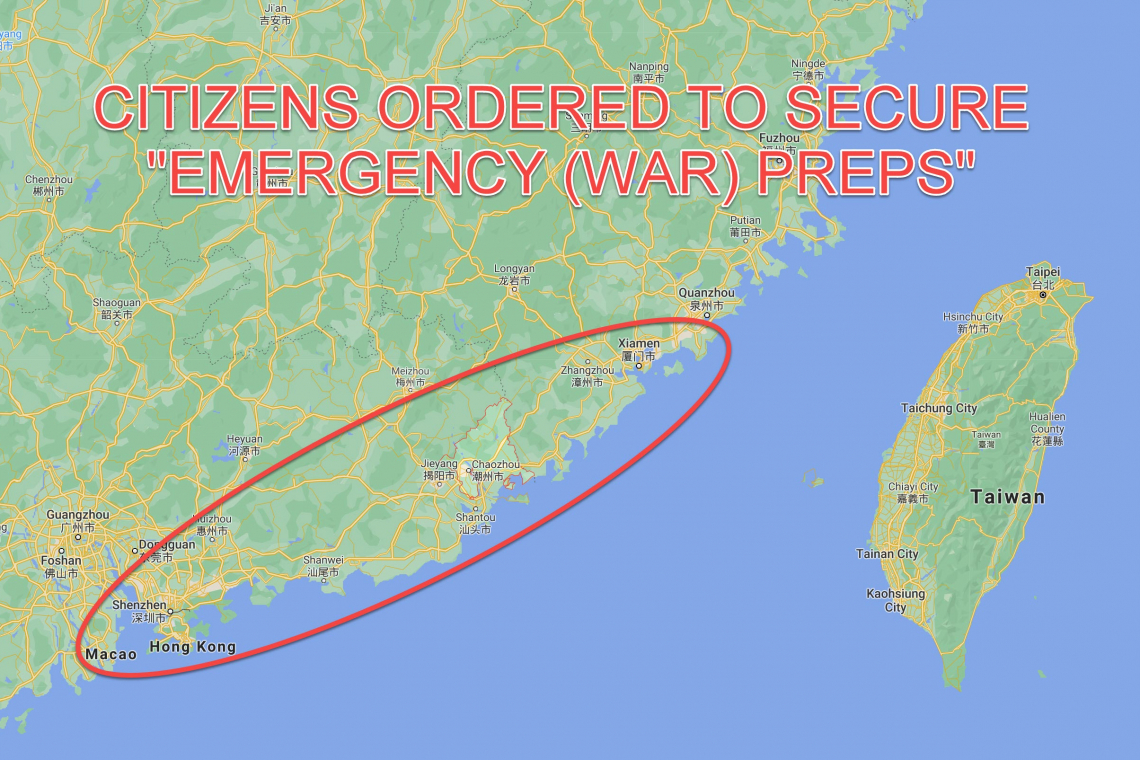 China has formally instructed its people in coastal cities near Taiwan, to make certain they have 72 categories of Emergency Preps.  Even Chinese are now asking if war with the United States over Taiwan is soon? Americans near Pacific Ocean PORT CITIES should prepare for Chinese bombing as well.

The General Secretary of the Communist Party of China Xi Jinping inspected Chaozhou, a city on the front line of Taiwan, and called out to the Marines stationed there. After he left, Shenzhen issued the "Shenzhen Family Emergency Material Reserve List" to guide the public in dealing with "disasters." These two incidents occurred almost at the same time, causing local people to think about whether it was related to the tension in the Taiwan Strait. There are questions on the Internet, is there something going on in Fujian and war in Xiamen?

On Monday during an inspection tour of the Chaoshan area in Guangdong, Xi Jinping, General Secretary of the Communist Party of China and Chairman of the Central Military Commission, went to the frontline city of Chaozhou in mainland China to express condolences to the Marine Corps soldiers. Early Wednesday, the Shenzhen Municipal Emergency Management Bureau issued a notice to guide citizens to respond to "disasters."

According to the "Shenzhen Family Emergency Material Reserve List" issued by the Shenzhen Municipal Emergency Management Bureau, it is divided into the "Basic Edition" which lists the required items from emergency items, emergency tools, and emergency medicines to common disasters and applicable disasters. For example, multifunctional emergency flashlights, lifeguard whistle, fire extinguishers, breathing masks, etc. The "extended version" includes food, daily necessities, emergency supplies, and emergency tools. Some people made Internet social media remarks asking is there going to be an accident in Fujian, and will there be war in Xiamen?

During his visit Xi Jinping said that the Marine Corps is an elite amphibious combat force and shoulders important responsibilities in safeguarding national sovereignty, security and territorial integrity, safeguarding national maritime rights and interests, and safeguarding national overseas interests. Xi Jinping also said, "Grasp the characteristics and laws of the Marine Corps construction management and combat application, accelerate the transformation and construction, accelerate the improvement of combat capabilities, and strive to forge a strong force of combined versatility, rapid response, and full-field use."

China has recently stepped up its military activities around the island of Taiwan. In the first nine months of this year, China dispatched 1,710 fighters to Taiwan’s air defense identification zone to carry out air intrusion and 1,029 maritime intrusions. Taiwan’s Ministry of National Defense stated that since the beginning of January this year, the Taiwan Air Force has been forced to take off 4,132 emergency sorties, a year-on-year increase of 129%. In the past month, nearly 40 Chinese fighter planes have crossed the center line of the Taiwan Strait and entered the Southwest Taiwan Air Defense Identification Zone.

China is preparing to take Taiwan by force and knows it will cause a shooting war between itself and the United States.  Thus, they are now prepping their citizens to have "emergency supplies" before American bombs start falling on their coastal cities.

Governments do not take these sorts of emergency preparedness steps, so publicly, unless they KNOW those preps will actually be needed.  Thus, a reasonable person should conclude that war is coming, and coming soon.

The following major port cities in the United States would be subject to attack by the Chinese Navy:

These are mostly deep water ports, all of which COULD be targets for Chinese naval attack, in the event the US goes to war with China over Taiwan.  The ones like Bremerton, Pearl Harbor and San Diego, which are ALSO military ports, would likely be the primary targets for such an attack.

ALL of these ports would be essential to any US war effort, and crippling (or destroying) those ports, and the cities near them, would be a primary goal of China to halt US supply routes to its armed forces fighting in defense of Taiwan.

China now has the world's largest navy.  They are fully capable of sailing over here, and firing upon our ports and nearby port cities.

If you reside in or near those port cities, it is probably a good idea to have Emergency Preps such as Emergency food, water, medicines, a generator, fuel for it and for your vehicles, a First Aid Kit, and radio gear like a CB, in case you come under attack and supply lines for basic services get blown up.

Yes, you read that correctly.  If there's a war between the US and China, we here in the US  *****WILL***** be subjected to military attack in our west coast cities, by the Chinese Navy.  They will fire ship-borne guns, rockets, and missiles, to blow us up.  If you live in or near these port cities, that means YOU.