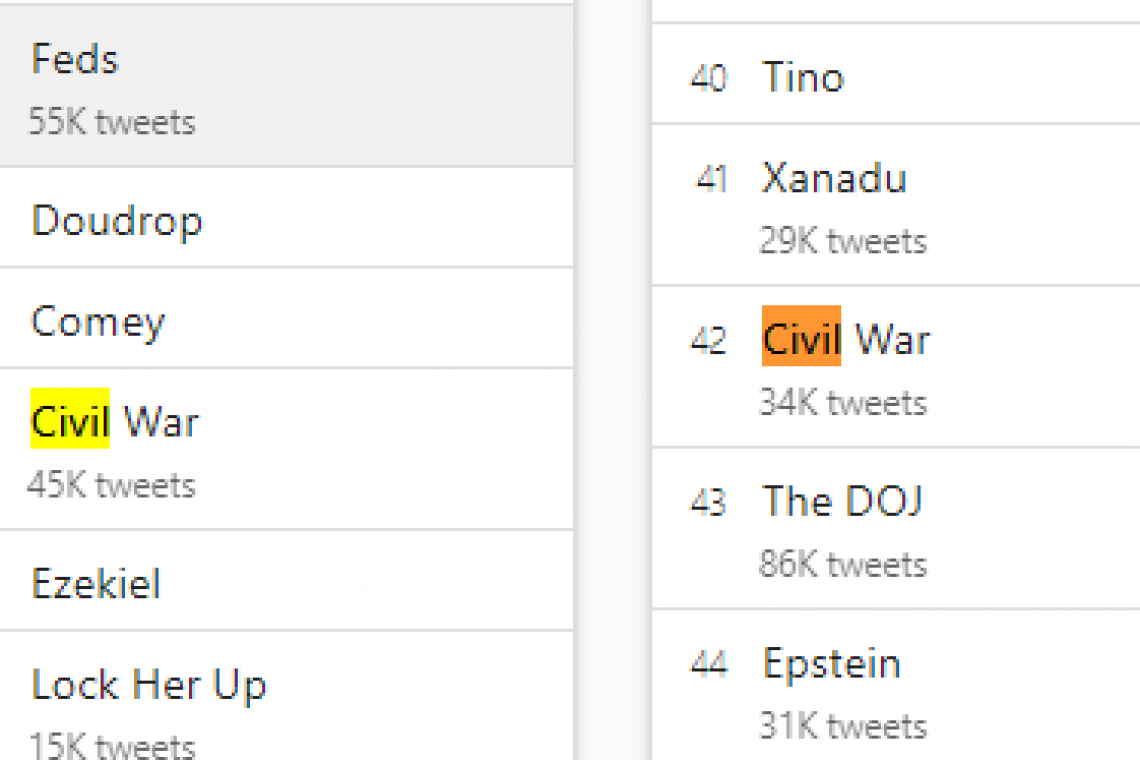 By about 9:30 p.m. EST – approximately three hours after Trump announced the FBI raid on his social media platform, Truth Social – “Civil War” had been tweeted more than 35,000 times and became trending in the Political figures and Politics categories.

Some posts, such as one from Rep. Marjorie Taylor Green, likened the FBI’s raid on Trump’s home as “the type of things that happen in countries during civil war.” She added, “The political persecution MUST STOP!!!”

The FBI is raiding President Trump’s home in Maralago!

This is the rogue behavior of communist countries, NOT the United States of America!!!

These are the type of things that happen in countries during civil war.

The political persecution MUST STOP!!! pic.twitter.com/i4DYygLsvj

Other users said the FBI’s actions were akin to waging civil war. Some who supported the raid accused Trump supporters of using the raid as an excuse to start civil war.

“National Divorce” was another trending keyword.

Trump said in his statement that his Mar-A-Lago club was “currently under siege, raided and occupied by a large group of FBI agents.” He added that FBI agents “even broke into my safe.”

Trump also linked the FBI raid to deliberate political persecution ahead of the 2022 midterm elections and his possible reelection bid in 2024.

“It is prosecutorial misconduct, the weaponization of the Justice System, and an attack by Radical Left Democrats who desperately don’t want me to run for President in 2024, especially based on recent polls, and who will likewise do anything to stop Republicans and Conservatives in the upcoming Midterm Elections,” Trump said.

CNN reported Trump was not in Florida at the time of the FBI raid. The FBI raid reportedly focused on Trump’s living quarters and office spaces.

The FBI told the Hal Turner Radio Show, “We don’t have any comment.”

“I’ve seen enough. The Department of Justice has reached an intolerable state of weaponized politicization. When Republicans take back the House, we will conduct immediate oversight of this department, follow the facts, and leave no stone unturned,” McCarthy said. “Attorney General Garland, preserve your documents and clear your calendar.”

“The raid of [Mar-A-Lago] is another escalation in the weaponization of federal agencies against the Regime’s political opponents, while people like Hunter Biden get treated with kid gloves. Now the Regime is getting another 87k IRS agents to wield against its adversaries? Banana Republic,” DeSantis said.

It only took the US Department of Justice from June, 2009, to August 2022 to go from a big violation of the Constitution, imprisoning me for writing and Editorial they didn't like, saying the First Amendment freedom of speech and freedom of the press "did not apply" to the Editorial I wrote, to raiding the private home of a former US President over allegedly Classified Documents that a President was allowed to see!

It seems to me the US Department of Justice has become destructive of the rights and liberties of Americans at all levels of our society.  With this raid against former President Trump, now, no one is safe.

Our Founding Fathers spoke about the issue of when a government "becomes destructive" in the Declaration of Independence.   They wrote:

We hold these truths to be self-evident, that all men are created equal, that they are endowed by their Creator with certain unalienable Rights, that among these are Life, Liberty and the pursuit of Happiness. — That to secure these rights, Governments are instituted among Men, deriving their just powers from the consent of the governed, — That whenever any Form of Government becomes destructive of these ends, it is the Right of the People to alter or to abolish it, and to institute new Government, laying its foundation on such principles and organizing its powers in such form, as to them shall seem most likely to effect their Safety and Happiness.

In that same document, our Founding Fathers went further.  They then said:

But when a long train of abuses and usurpations, pursuing invariably the same Object evinces a design to reduce them under absolute Despotism, it is their right, it is their duty, to throw off such Government, and to provide new Guards for their future security.

The weaponization of criminal law, applied to Constitutionally protected activities like my June, 2009 Editorial, and to President Trump's lawful possession of Presidential documents - if he even still had them -- and countless other examples too numerous to cite,  has reduced the United States of America to a Banana Republic.

No, the people presently exercising government power have finally gone too far.

This raid against President Trump comes years after Hillary Clinton intentionally obstructed justice, by Bleaching about 33,000 emails from a computer server AFTER those emails had been Subpoenaed!   The Justice Department did NOTHING about that obstruction of justice, or her possession of classified materials.

It also comes after Hunter Biden's laptop computer showed bribes, kickbacks, and/or payoffs to Joe Biden from foreign sources both while Biden was Vice President under Obama, and perhaps to this very day while Biden is (illegitimate) President!   The Justice department is nowhere to be found with that laptop evidence.

The fact that "Civil War" is now trending on social media, shows how "too far" they've actually gone with this Trump raid.

It's time for some type of citizen intervention in the ongoing activities of this former government, which has clearly morphed into Tyranny.

What's going on inside the US Department of Justice, it seems to me, is now clearly defined Tyranny.

When you factor-into the reality that it is the same US Justice Department that holds all the "dirt" on sitting federal Judges, to force them into doing what the Justice Department wants in tough or controversial cases, - you see the tyranny for what it actually is.

When you also factor-in the reality that after the stolen election in November 2020, the Justice Department not only failed to investigate or prosecute the rampant, brazen, election fraud, they also made sure any lawsuits brought before the federal courts were quickly dismissed without even evidentiary hearings!

I mean, think about what actually took place on Election night, 2020: People actually shut down six key swing state urban centers, each of which had Trump up by 60,000 or more votes...and then counted the mail in ballots in secret with no republicans watching.

The scene at Detroit’s absentee ballot counting center is growing more heated. The windows now being covered up. Allegations of violations. Sec. of State says she welcomes challenges. pic.twitter.com/oUL4A0h3Ku

They faked a water main break in Atlanta to kick out republicans.

In the morning they said Trump lost in all six key towns by a few thousand votes.

Since then its been proven mail in ballots were produced and handled in illegal fashions in at least 4 states.

If you do what they did, BRAZENLY AND OPENLY STEALING THE ELECTION....you didn't do it because you plan on giving it back. 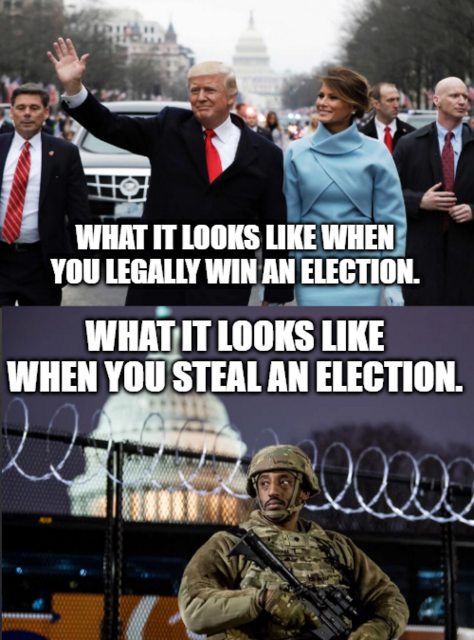 Since then, they have thrown innocent people who did nothing more than trespass, in jail indefinitely with no bail for two years to use them as political capitol to pretend their illegit regime was threatened by racist White People.

-They have spied on Americans who went to school board meetings to complain about homosexuals infiltrating the schools to promote homosexuality.

-We have a Joint Chiefs of Staff Chairman who told the Chinese, don't worry, I'm not obeying this President.

- The FBI has tried to entrap innocent people into plots the FBI was running to fake-kidnap a Governor in Michigan.

So anybody who tells you the raid on Mar Largo was somehow not 'going over the line'  is oblivious to what has already actually been going on. You are not living in a democracy, you are living in a rogue state run by an illegitimate coup installed behind a military barrier. AND THEY KNOW IT...quit pretending they don't.

They are not playing games. They are ruthless and evil. And in the next two years this raid on Mar Largo will look like nothing.

It must be nice to have all those "dirt" files to hold over Judges heads, to get them to rubber-stamp illegal government actions as if they are somehow good.

Thanks to the Justice department, we in the United States are forced to suffer an illegitimate President and Vice President, who got into office through shameless election fraud, we cannot successfully petition the courts to redress grievances about that fraud because the flamboyantly corrupt federal judges throw the cases out before any evidence review,  and now we see the legitimate President, Trump, targeted by Search Warrant.

The politicization of criminal law enforcement is precisely what third world despots do in Banana republics.   THAT is where the US Justice Department has brought us all.

It's long overdue that the American people step up and put a stop to this, by whatever means are necessary.

I should be careful citing the Founding Fathers; the storm troopers in the Justice Department may try to make this Editorial a crime, too, even though the First Amendment freedom of speech and freedom of the press covers all speech, uttered everywhere.  It does, after all, say "Congress shall make NO LAW . . . ."

None.  Not even laws they think are for valid reasons.

The power to outlaw speech is absolutely forbidden to the federal government.  Of course, as I found out personally in June, 2009, they clearly don't care about that, and go off and do what they do anyway.  And they get dufus federal judges to rubber-stamp it as somehow "ok."

It's time to reign-in -- or replace -- this federal government.

I think people who say they thought that this country still had hope of all these troubles being settled peacefully are now were forced to wake up to the fact this will either be oppression, or secession/rebellion, no other choices.

Something definitely snapped with the raid against President Trump. You can feel it in the air.

For those of us awake for awhile this wasn't unexpected, but for those who still believed at least some of this nation still existed, it was a wakeup call.