UPDATED 1:06 PM EDT -- CONFIRMED AS REAL; INVEIGATION ORDERED. In a stunning leak of a pending US Supreme Court majority decision, it looks as though at least five Justices of the Supreme Court - a majority - have voted to overturn the landmark decision "Roe v. Wade" and thereby return the issue of Abortion to state legislatures.

Leaks of this type do not generally take place in Supreme Court cases.   Said one court watcher "Someone is so irate at this decision, they chose to abandon court rules, decorum, and simple respect, and reveal a Draft of the coming decision.  That is one indication of how obsessed some people are with allowing the wholesale slaughter of unborn children to continue."

A leak of a Draft Decision from inside the US supreme  court is unprecedented in the Court’s modern history.

(HT REMARK: I still have a fever from last night, but I am working nonetheless.)

The Draft Decision appears below:

There are UNCONFIRMED RUMORS as to the possible source of this leaked Supreme Court Decision.

Jain was quoted in a 2017 Politico piece by Josh Gerstein. It is  Gerstein who initially published the draft SCOTUS opinion on Roe.

The left-wing seems to be having a meltdown over this leaked decision.  Apparently, they are totally obsessed with being able to kill babies?!?!?!?!

MASHUP! Pro-abortionists are losing their minds over the thought of not being able to kill babies. pic.twitter.com/0oqFZyMpu5

HT REMARK: What I don't get is how come these "smart" women can't figure out how to prevent pregnancy so they never have to get an abortion - seems fairly simple - if you don't play - you can't loose

Abortion is not a form of birth control.

Oh, and for what it's worth, these same leftist who are whining about body autonomy now . . . were the same ones that wanted to hold me down and jack me up with the vax against my will.

Maybe it's simpler than all that.  Maybe they are low IQ, low quality, humans that are incapable of controlling animalistic urges.

They might be literally and genuinely are operating at a sub-human level.)

If I were really cynical (oh, wait, I actually am) I would think this is a perfect "Get-Out-The-Vote" effort.

Democrats are getting their ass kicked knowing they are going to lose more than 60 seats in the house and 4 in the Senate.

They are trying to divert from the issue and try to give their base a reason to vote.

Oldest trick in the book and another example of what a group of unethical lying cheating scumbags the Democrat-Social-Fascist movement is led by.)

The Supreme Court has confirmed in a statement that the leaked draft document that would overturn Roe v Wade is real.

The ruling was not meant to be released until summer 2022, and the leak may speed up the timeline. 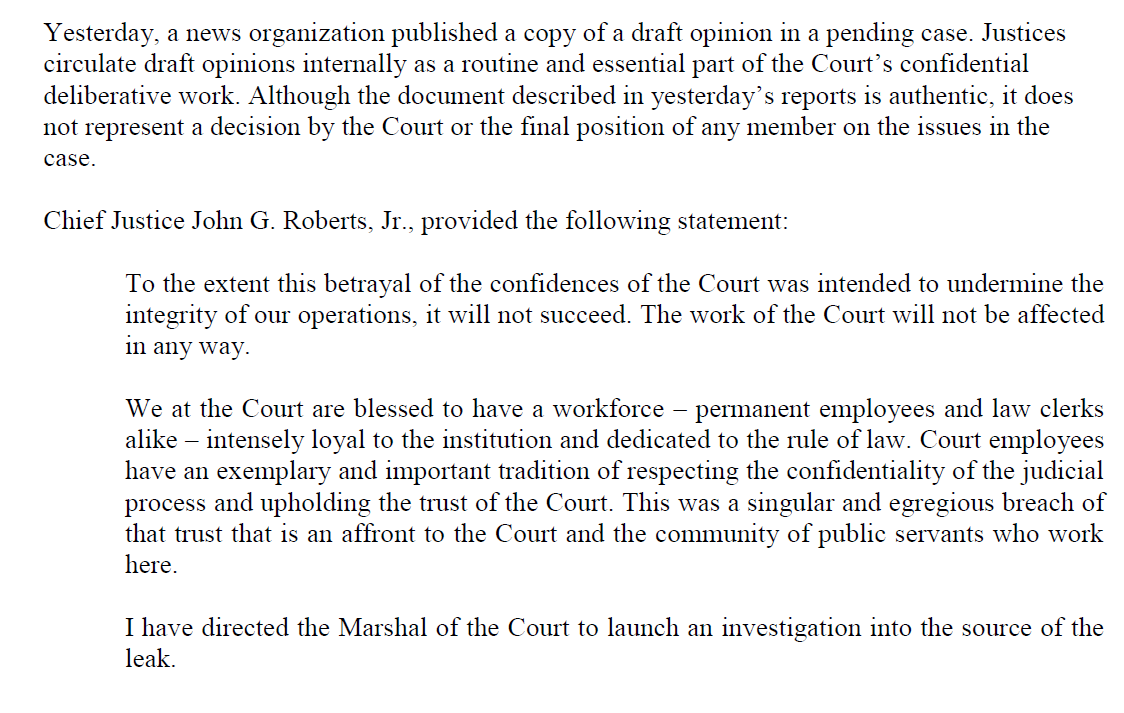