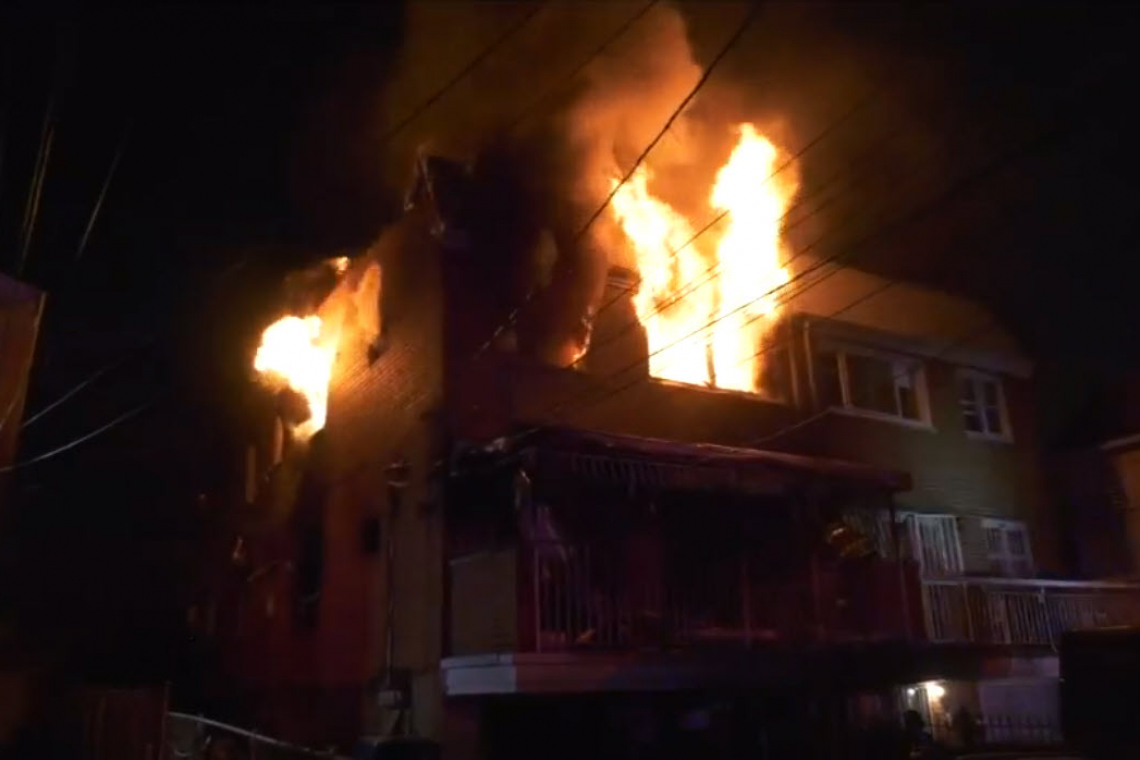 One person was killed and several others were injured in a house fire that broke out in Queens.

Officials say the heavy flames tore through the home on 89th Street in East Elmhurst at around 11 p.m. Friday.

As firefighters worked to put out the blaze, they found a man in his 60s unconscious on the second floor. He was taken to a local hospital where he was pronounced dead.

Some of the other residents were taken to the hospital to be treated for minor injuries.

Residents say an e-scooter could be to blame for the fire.

"I unplugged the scooter, I was on the first floor. As I'm putting cereal in a bowl, I heard an explosion, like gunfire. As I open the door to the second floor, those stairs were already on fire in seconds. It was a disaster," Jose Corona said.

Firefighters did pull a burnt scooter from the residence, but the official cause of the blaze is still under investigation.

At least one firefighter also suffered minor injuries during the incident.

# #EV fires — KathrynM 2023-01-24 20:05
Funny how a Japanese reporter interviewed the VIP driver of Klaus schwab without showing his face She noticed all the Ubers were EV but the big black cars were gasoline powered. She asked the driver why the VIP s didn't use the EV type since it's supposedly why the WEF is there and driver states, "EV is not safe. All VIP must be transported in petrol vehicles. It's always been so and will not change."

Anyone notice all the video of the food processing plants w/inextinguishable fires that burn way too hot and bizarrely fast? The best example was the largest open farmers market in the world in Paris.
The Security video showed the ignition then wild rapid spread of flames consuming the over 5k sq foot tent style farmers market in minutes. The fire had completely consumed the structure before any fire trucks could arrive and assist. The fire looked exactly like an EV explosion of any lithium battery whether on a bicycle or a bus or a car. They all burn the same. Just like the pics of that house in the article. I've been asking this question since I saw the video of the Paris fire. The EV Tesla owners are rabid defending their electric vehicles and I get a vomit of statics on safety and that gasoline powered cars are much more dangerous, blah blah.

“The head of the German bishops’ Conference (DBK) introduced
binding guidelines on sexual education for all parishes in his diocese
that force them to accept and "promote" homosexuality and transgenderism,”
LifeSite News reported this week.

“According to these 10 guidelines, ‘there is diversity in sexual identity and orientation.'”

(LifeSite News reported this week.)
https://www.lifesitenews.com/analysis/german-bishop-announces-new-guidelines-forcing-priests-to-accept-homosexuality-transgenderism/
(The Bishop even looks like a pedophile.)
+1 # █▓▒░ Speaking of FIRE... OUCH... ░▒▓█ — Palehorse 2023-01-21 21:52
|

(Is your name there?)

...The risks for ships from the transport of electric cars have been discussed since the Felicity Ace sank off the Azores last February. E-vehicles on board had caught fire and the blaze could not be extinguished.

Finally, the huge ship sank with thousands of electric cars and vehicles from Porsches and Bentleys....

This was the act of a mind controlled "useful idiot" as the "religions" exist mostly for the purpose of divide and conquer.

If this guy remains alive he would better spend his time concentrating on our real enemy.... the globalists.
# RE: This was the act of a mind controlled "useful idiot" — A706 2023-01-22 06:33
Well, I agree, his actions prove your point.
It does accomplish bringing awareness at how easily rattled these Pedo Worshipers are. It's a book of lies and they are crying and stomping their feet like children.
+8 # WWIII — Vercinge 2023-01-21 14:23
Donald Trump has not only disqualified himself to run for POTUS irreversibly…..…he has insanely set himself up to be prosecuted by
the Left for perpetrating an intentional genocide of the American people in collusion with his countless Operation Warp Speed co-conspirators.

He blasphemously thought he was God almighty when he banned bump stocks....

A book could be written about how he was at best a useful idiot that served the globalists.

He is Controlled Opposition for the Globalists.

After Lenin took over Russia with Communism, Lenin himself set up an Opposition Team, to be "counter revolutionaries", the Team was called THE TRUST.

The primary purpose was to get all anti-communists to STAND DOWN, and not fight Communists. The TRUST was going to take down Lenin. But that never happened.

Another useful purpose was to identify all the anti-communists, so they could be executed.

In Japan, where electric bikes have been around for almost a decade, I have not heard of fires. They may also not use lithium based batteries, which I suspect are the issue here.

Also, electric wheelchairs have been around for many years and do not appear to have these issues - they may use lead-acid or other more established battery technologies.
+3 # Wow — LauraL 2023-01-21 14:14
I really appreciate this article Hal. I'd been considering something like this since I'm quickly losing my ability to walk. I can't use a normal wheelchair due to the same weakness in my arms. Now I know that this is not a solution.

https://vaccineimpact.com/2023/americans-abandoning-corporate-christianity-and-the-synagogues-of-satan-called-churches/
.
Perhaps they have figured out that evil runs the modern Christian Church and has done so for at least 1,700 years.

Perhaps they have figured out that "the church" is nothing more than a  "stand down" control mechanism for their globalist masters.

FWIW lithium batteries are a lot more dangerous than we are led to believe.
+5 # RE: But if 3000 had died... — arcace 2023-01-21 13:18
Yes. Lithium batteries produce the very toxic hydrofluoric acid when they burn. Open the windows and get out of the house if you suspect a lithium battery burned.
+2 # RE: But if 3000 had died... — The Deplorable Renegade 2023-01-21 16:56
During Hurricane Ian in SW FL, there were stories about Teslas being left in the floodwaters, which were saltwater BTW, whose batteries caught on fire after the water receded. A firefighter I know down there told me it takes at least 8 hours or more to totally extinguish those kind of fires.
# We are in real trouble, my friends. — MildB 2023-01-21 12:19
Joe Biden Named In 2017 Email Discussing Massive Multi-Million Dollar Gas Deal with CHINA?

All off Hunter's laptop which the worm state, in an act of high treason, deep-sixed while blatantly lying to the American people – calling it “Russian disinformation.”

Jews have hated Christ and Christians for the past 2,000+ years, thus the plans for Genocide.
# Use Brave — LegionPrime67 2023-01-21 16:11
The Brave browser and Deagle under images. You need to grab two, the newer one you will they added more "deaths". Get both for historical record. I grabbed them last week.
+3 # Try Jeff Rense — HuskerMike 2023-01-21 13:59
Rense.com. Jeff made a copy of it before it was scrubbed. Only 99 million of US population still left by 2025. Jeff talks about this frequently on his nightly podcasts with some of his guests.

Rense.com. Jeff made a copy of it before it was scrubbed. Only 99 million of US population still left by 2025. Jeff talks about this frequently on his nightly podcasts with some of his guests.

Anyone know where I can get a copy of the deaglereport. Seems to have been scrubbed.

https://archive.org/details/restricted-documents
+5 # RE: RESTRICTED DOCUMENTS.zip 2.8 GB Download — JFY 2023-01-21 13:17
.
Hahaha, you've really been racking your brain these last couple of weeks to try to think of THE right subject matter that will get someone on this site to download your stuff, haven't you?

Condolences and RIP for the person that perished, though.
Refresh comments list
RSS feed for comments to this post
JComments
by sur.ly
100% Trusted Informational Platform Website 2021