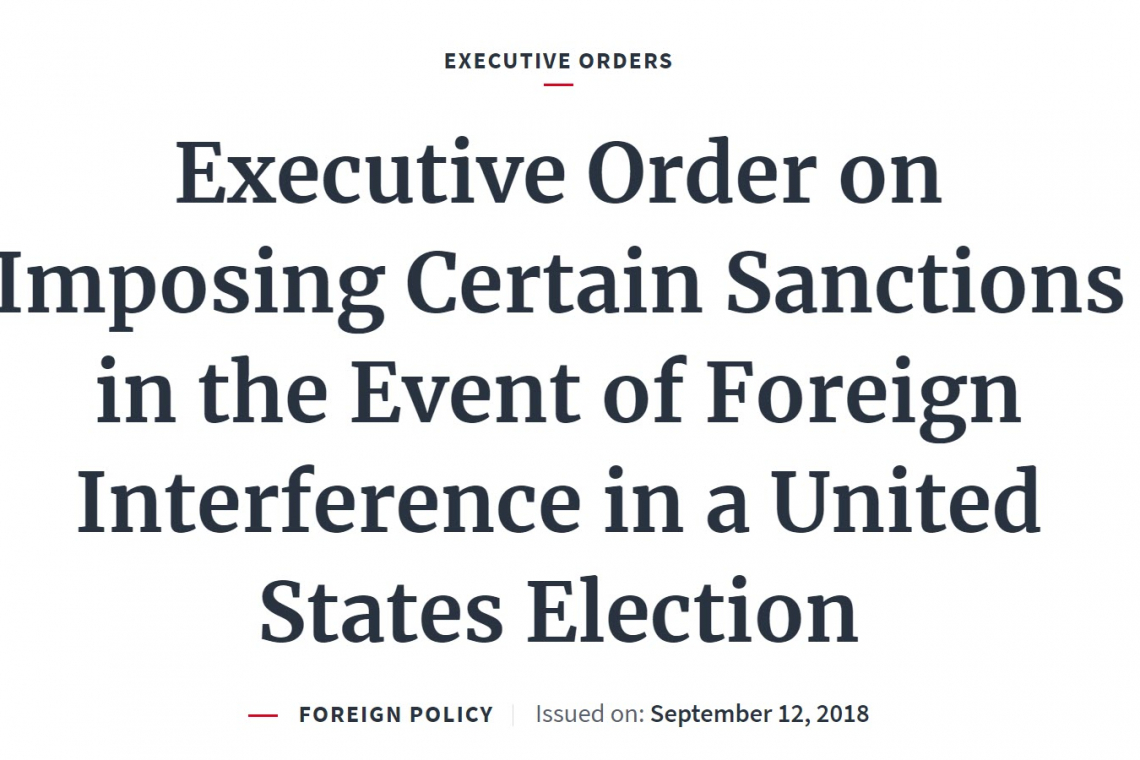 What's about to take place here in the United States is so staggering, so monumental, the only proper way to describe it is: It's gonna be Biblical.  A whole slew of Americans, Corporations and their Executives, are going to wake up a few mornings from now, and find out their entire lives have been "Blocked" (read "seized") by the federal government, over their participation in "Foreign Interference with a U.S. Election."

Remember all the nonsense about "Russia Collusion?"  It all turned out to be totally false, drummed-up by Hillary Clinton and the Democrats.   Well, while they were claiming "Russia Collusion," and using their false claims to rhetorically beat our President over his head with it, they got him to enact an Executive Order on what would happen to anyone who engaged in "foreign interference in a U.S. Election."

The Order is very broad insofar as it makes clear that anyone who alters, interferes with, distributes PROPAGANDA about, covers-up, or otherwise takes part in an election as part of "foreign interference" loses everything.  ALL their property, stocks, bank accounts . . . . E V E R Y T H I N G.  They can't even apply for Credit or Donations!

That Executive Order (HERE) was made September 12, 2018 and is in full force and effect.

Fast-forward to today; a little over two years after the Executive Order, and we are all going through a MESS of an election, wherein the actual winner of our Presidency is STILL not officially known.

According to the mass-media, and the big social media companies like TWITTER, FACEBOOK, REDDIT et. al.,  Joe Biden won.  According to the Hal Turner Radio Show and other media on the right, Donald Trump won but was DEFRAUDED by computer software which altered the vote counts and by phony ballots brought-in by the pallet load, to steal the election (Stories HERE, HERE, and HERE).

Then, yesterday, we found out that software used by the voting machine services company DOMINION, was being tabulated and otherwise manipulated on a server located in . . . SERBIA.  At first glance, an insignificant point.  Upon further reflection, a BOLT OF LIGHTNING FROM HEAVEN ABOVE!

That server being in SERBIA makes every component of the election, and the media reporting about it, "foreign interference" subject to the Presidential Executive Order.

Which media outlets used the data feed from that server to report (propaganda) to the American people?   ALL OF THEM, I think.   ABC, NBC, CBS, CNN, MSNBC, CNBC, FOX, the Associated Press (AP), United Press International (UPI). What about the Reporters working for those media outlets?  Guys like Jim Acosta, Don Lemon, Brian Steltzer and a slew of others over at CNN.  Didn't they too, redistribute the same propaganda?  Aren't they all, now, to this very moment, covering-up what actually took place?  The Executive Order deals with ""covering up" foreign interference."

Which Social Media companies used the SERBIA server data? Twitter. Facebook, and Reddit, I think.  The list goes on and on and on.   Even worse, which Social Media Companies  treated THEIR propaganda from the SERBIA SERVER as "fact" and intentionally blocked, deleted, suspended, applied warning labels, shadow-banned info about, or otherwise "covered-up" what was actually taking place?  Yes, Twitter, Facebook, and Reddit I think, . . . and so on.

Are you starting to get the picture now? Do you see where this is going? (Article continues beneath Ad)

Do you realize what they have done to themselves by using this SERBIA based server that was skewing the election results?   Yep.  To a lot of regular folks who are not lawyers and who cannot render a competent legal opinion, they have opened themselves up to having their ENTIRE CORPORATIONS and ALL PROPERTY, CASH, STOCKS, ASSETS, seized by the federal government.  Cash. Stocks, buildings, data centers, computer equipment . . .  EVERYTHING . . . it seems, can be seized!

If you are a stockholder in any of these corporations, a lot of people are starting to think you could very well wake up a few days from now -- broke.  Everything . . . gone.  Seized.

Now, there are a slew of other people in this thing too.  Big names.  Powerful people. Huge organizations.  Let's take a brief walk down Executive Order lane and see who stands to lose . . .  E V E R Y T H I N G.

As a sort of "Tease" as to what's below, there a 30 second scene from "Law Abiding Citizen" that is truly relevant to what is now taking place.  As you watch it, pay attention to the guy talking about "Total fucking war" and imagine it is Donald Trump speaking: