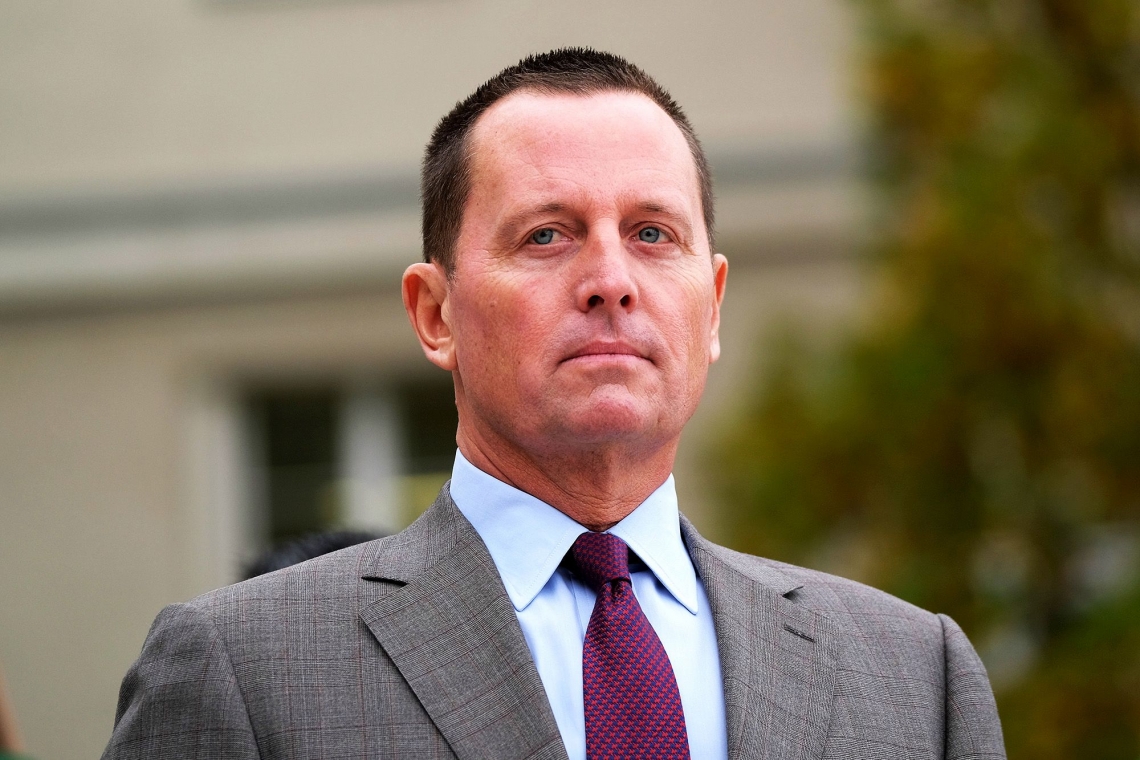 The FBI Will No Longer be Giving Intelligence-Based Threat Briefings to Candidates.  Acting Director of National Intelligence, Richard Grenell, made the announcement: 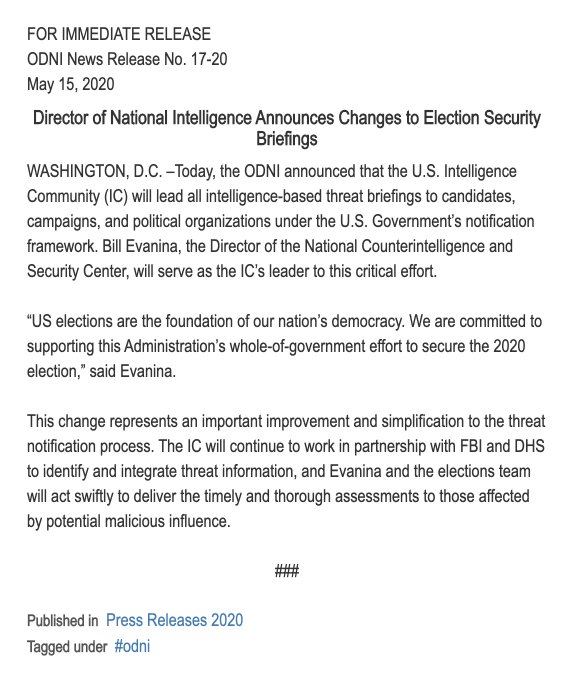 When a reader sifts through the government-speak niceties, the reality becomes perfectly clear: The FBI is being sidelined out of Intelligence Briefings that have, for years, been given to political candidates for high, federal, elected office.  Those briefings will now be done solely by the Office of Director of National Intelligence (ODNI).

Well, while the Press Release doesn't explicitly say it, the reason is clear to anyone who has followed the entire "Russia Collusion" hoax:  The FBI CANNOT BE TRUSTED.

This is huge.  Gigantic.  Enormous.  Staggering.  and long overdue.

The FBI has finally been so publicly rebuked for its gross conduct in the 2016 election, it is hard to see how the agency can EVER recover.

Looking back at what the FBI did is a necessary endeavor:

The FBI didn't like Candidate Donald Trump and didn't want him elected to the highest office in America.  Why?

Because Trump was clean.  There was no dirt on him they could use;  no skeletons in his closet they could hold over his head to get him to do whatever they wanted.  And to the FBI and Intel Community, THAT was dangerous.

It was dangerous for them because if there was actually a boss over them whom they could not control, then the dirty tricks, and vicious activities they had engaged-in for years (Overthrowing governments around the world, waging endless wars, churning billions of dollars through the military industrial complex to earn huge sums of money in private stock transactions, chiseling-away at Constitutional protections from unreasonable searches and seizures, etc.)  -- was all in jeopardy.

So the FBI - through its Then-Director and former admitted Communist James Comey, in conjunction with then CIA Director John Brennan (an alleged Muslim convert who is said to have turned his back on Christ for "Allah"), and then-Director of National Intelligence (DNI) James Clapper, all of whom wanted Hillary Clinton as President,  M A N U F A C T U R E D completely phony "dirt" to use against Trump: The "Pee Pee Dossier" and the totally fraudulent claim of "Russia Collusion," to destabilize his incoming Administration and make him ineffective - or get him Impeached and thrown out.  It should go without saying that Communists, and anyone who would willingly turn his back on Christ, are probably untrustworthy.  Comey and Brennan seem to confirm such an assessment!

But there were still honest people in the Intelligence Community (IC) who saw what was being done, knew it was wrong, and blew the whistle about it to Trump.

Shortly after Trump won the presidency, Admiral Mike Rogers  traveled to Trump Tower in New York, where he provided an unsolicited briefing to the then president-elect. Through that briefing, Rogers informed Trump he was being set up by phony claims of Russia Collusion, Trump campaign, home, and office phones, were being tapped, and a plan was in place to smash his Presidency.

Immediately after that in-person briefing, Trump immediately moved his entire operation from Trump Tower, to the Trump National Golf Course in Bedminster, New Jersey, and all future operations were done out of there.  The move crushed the "bugs" that had been placed in Trump tower, in Trump campaign offices and perhaps even in Trump family homes.  In addition, with knowledge that the phones were tapped, the incoming President could keep himself, his family, his campaign, and his businesses, safe from those intending to do him unjust harm.

After firing Comey, and replacing Brennan, Clapper and company, Trump was hoodwinked into appointing Christopher Wray ass new Director of FBI.   But in the years since his appointment, Wray has done nothing to cut the cancer out and rebuild the public’s trust in the FBI.

In fact, it appears to many that Christopher Wray is just a less polished, mealy-mouthed, apparatchik, for the very same cabal that perpetrated the entire Russia Collusion nonsense to begin with!  To many people, Christopher Wray is more of a "Fredo" type -- a weakling who cannot be trusted.  Christopher Wray: The "Fredo" of the FBI.

This being the case, someone, somewhere, HAD to take action to gut the sinister system in place, which has been causing so much harm to the American Republic.  Which brings us to Richard Grenell.

Grenell just pulled the guts out a a key area of FBI meddling: Their ability to influence incoming political candidates.  That's over.

FBI is cut out.

What's most amazing about this development is that Grenell is gay.  Openly gay.   But his openness is what actually protects him.   No one can blackmail Grenell about whose rod he's sucked.  Or whose butt he humped.  Or who he let hump his butt.   It's a non-starter because Grenell is open about who he is.  What he does. That openness protects him from blackmail harm.

Many people think Senator Lindsay Graham could learn a thing or two from Grenell . . . but that's another story.

For now, the FBI has been sidelined in a gigantic manner.  Turns out, that's a good thing.  Because the sad truth is, the FBI cannot be trusted.

Look at WHO is already screaming about this change . . .  Adam Schiff . . . . the pencilneck at the center of most of the nation's past troubles!

“Our Committee did not authorize these latest changes—announced, once again, late on a Friday—by a temporary and unqualified Acting Director of National Intelligence ..." Schiff said in a statement Friday.

Translation: Stop doing things which will allow you to look into OUR crimes.

While we're at it, let's not forget the squealing from former CIA DIrector John Brennan,  with his Friday veiled directive to Christopher Wray "Stay strong."

The swamp is getting testy.

If Adam Schiff and John Brennan don't like what's happening, its probably a really good thing!