FORENSIC EVIDENCE: How Voting Software STOLE the Presidency for Biden 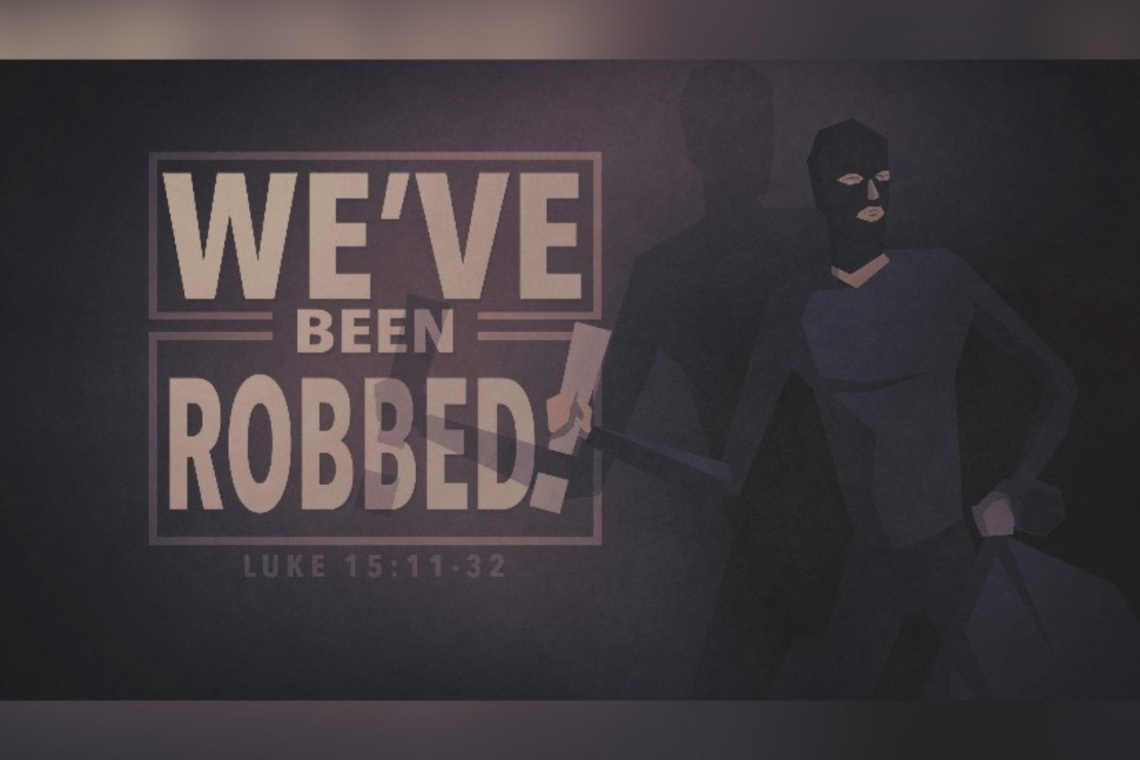 The Presidential Election held in the United States on November 3 was literally STOLEN by computer software deigned to do exactly that.  We have the forensic evidence and the manufacturer's actual software PROVING these facts.

Take a look at the snippet of computer programming code in the image below: 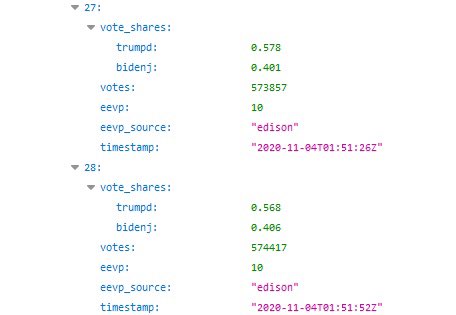 This computer software program is what was inside the DOMINION Voting machine system used in the November 3 election.

The software was grabbed by computer hackers, reverse-compiled, and then analyzed to see what it revealed.

Now, most of you are not computer techs.  Neither am I. I have very little idea about what I'm seeing.  So I inquired of MY computer technicians, the ones who make this web site work, and who keep my streaming audio servers and fiber optic connections to the radio stations working.  THEY know what this is, what it does, and what it means.  Here's the explanation:

You can see the adjustments in the early reporting data that the press used to fake call the election.

It works like this: Normally,  in real life and in mathematics, 1 Vote equals 1 vote.  Expressed numerically 1.0

Well, in the computer software snippet you see above, the software instructs that 1 Trump vote is only actually worth 0.578 of a vote while 1 Joe Biden vote was only worth 0.401

What these values are is: WEIGHTED BALLOT / VOTE VALUES assigned per candidate.

So seen above, the value below 1.0 reduces the values a 1.0 weighted vote has to a lesser value.

It's looks to be, at first-glance to be trying to get both candidates within 3% of each other so you can do whatever...  Like bring-in "the win" with phony mail-in ballots?

In the software, each scan is prior to the next, proven by time stamp.

At the end of the election, all the "Votes" are then totalized.

The value of Trump votes goes down as time moves forward in both scan sets.

This is Math.   It is also utterly amazing, in-your-face fraud.

But only if someone LOOKS . . .  and, sadly, our trusted employees in places like the FBI, don't seem to want to be bothered looking.

Well, law enforcement is not the only method available to look; the American people have power too, and some of them are using it.

SWITCHED -- and DELETED TOO!

Elsewhere in the computer software are ERROR LOGS in the voting system.   These logs capture incidents where something the software did was an ERROR.  While the Error Log does not correct the error, it notes the date and time of the error and what was done in a general sense, which caused the error.

Some of these ERROR LOGS record that, at various points, entire vote tally databases were "over-written."

That means all the original data was WIPED OUT and replaced by the new file.

A quick analysis of these "ERROR LOG" entries shows that at numerous locations, vote totals were completely wiped out, and a completely new database of vote totals over-wrote the real data!

Now, believe it or not, there are places on the Internet where the ACTUAL vote totals are stored, and those storage places are NOT SECURED.   The actual voting machine data is out there, in the open, for folks who know where to look!

Well, some of the people who know where to look, looked.

And what they found is utterly staggering.   Here are the INITIAL forensic audit results of the actual voting machine data from the November 3 election: 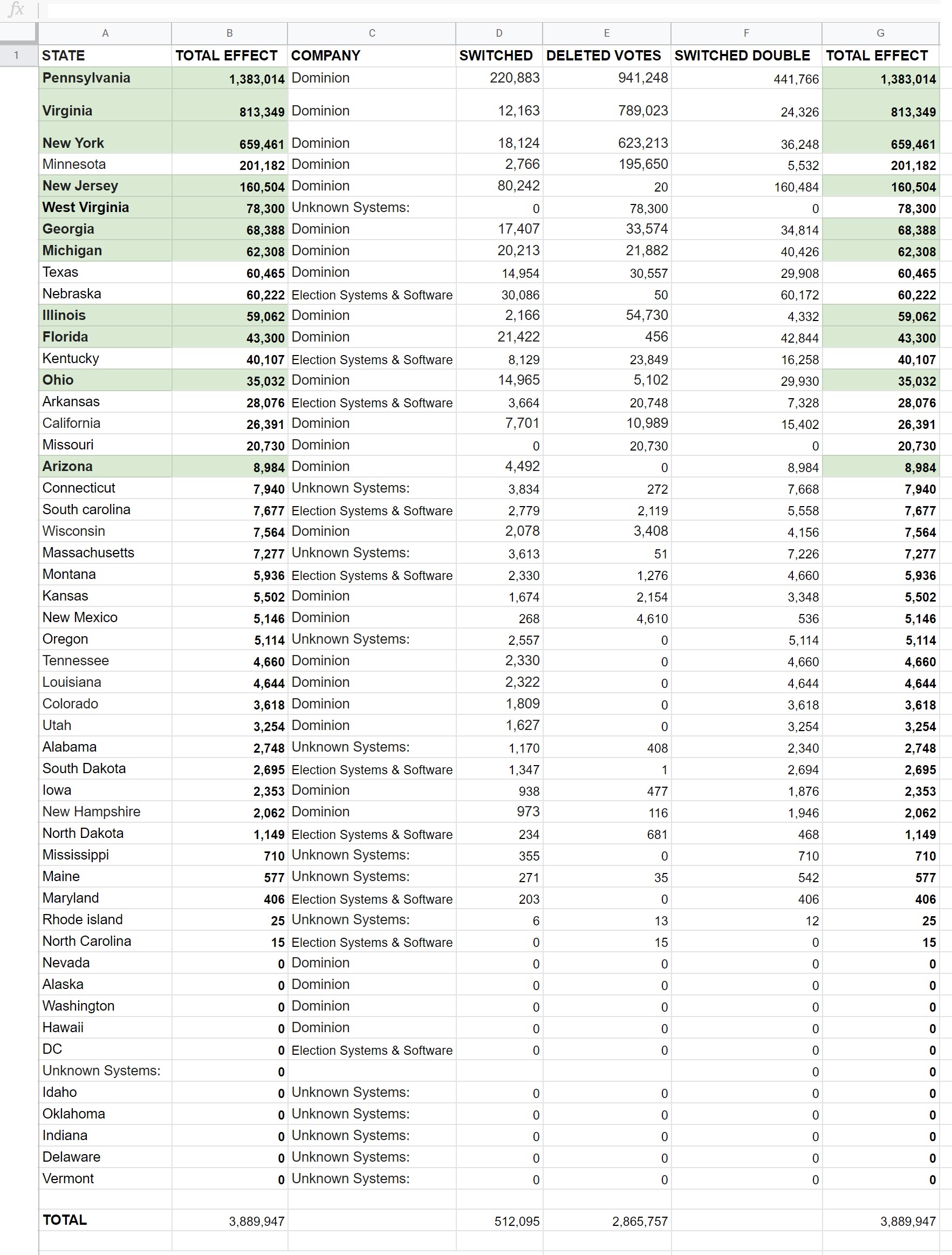 In EVERY case where votes were "SWITCHED" (its own column above), they went from Trump to Biden.

In EVERY case where votes were "DELETED" (its own column above), they were deleted from TRUMP.

The November 3 US Presidential Election was stolen.

The vote software programmers knew they could not simply rely on the software to steal the election.  They knew it was possible for a whole slew of voters to show up at polling places; more voters than the software might account for.  They also knew that there could end up being more Trump mail-in ballots than anticipated.   So they wrote "calls" into the software so they could "adjust" the vote totals if they needed to!  API calls.

This instructed the voting tabulation computers to go to an outside source, to either get different vote totals, or to accept MANUAL INPUT of new vote totals as election eve rolled on!

This aspect of the Forensic Audit is not yet done because it is vast and very complicated.   But to give you an idea of how corrupted our Election actually was, below is just one of many maps showing the API call-out of the election software.

DOMINION made use of . . . . FOREIGN BASED SERVERS for US Election data tabulation.   Servers in Europe and elsewhere.  Servers that Foreigners . . . and foreign governments . . . . all had access to.   Here.  Look: 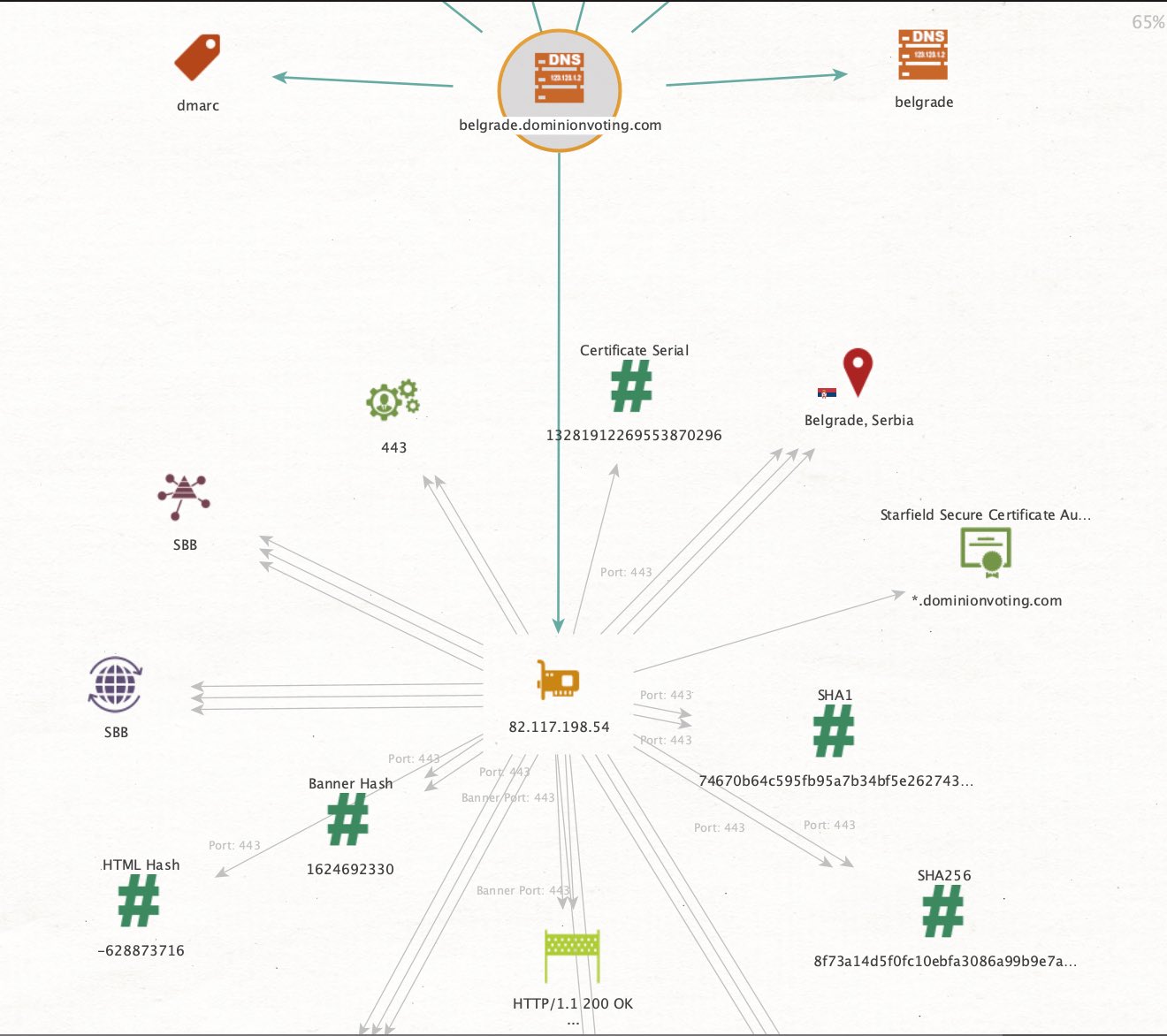 Other Americans have begun securing the entire voter databases for various states.   They are perusing that data for oddities.  Here's what they found on an initial review of the entire Voter Database from Wisconsin:

In just the first 5GB of Data from the complete Wisconsin Voting System, there are about 53,000 Dead people; ALL of whom got mail-in Ballots, and ALL of whom returned those Ballots to vote.

How was it determined that they are all dead?  Simple.  Their initial voter registration application date is prior to the year 1920.   All of them would have to be at least 118 years old and no one is that old.  Anywhere on this planet.

How do we know they all voted?   The Wisconsin government computer system says so. 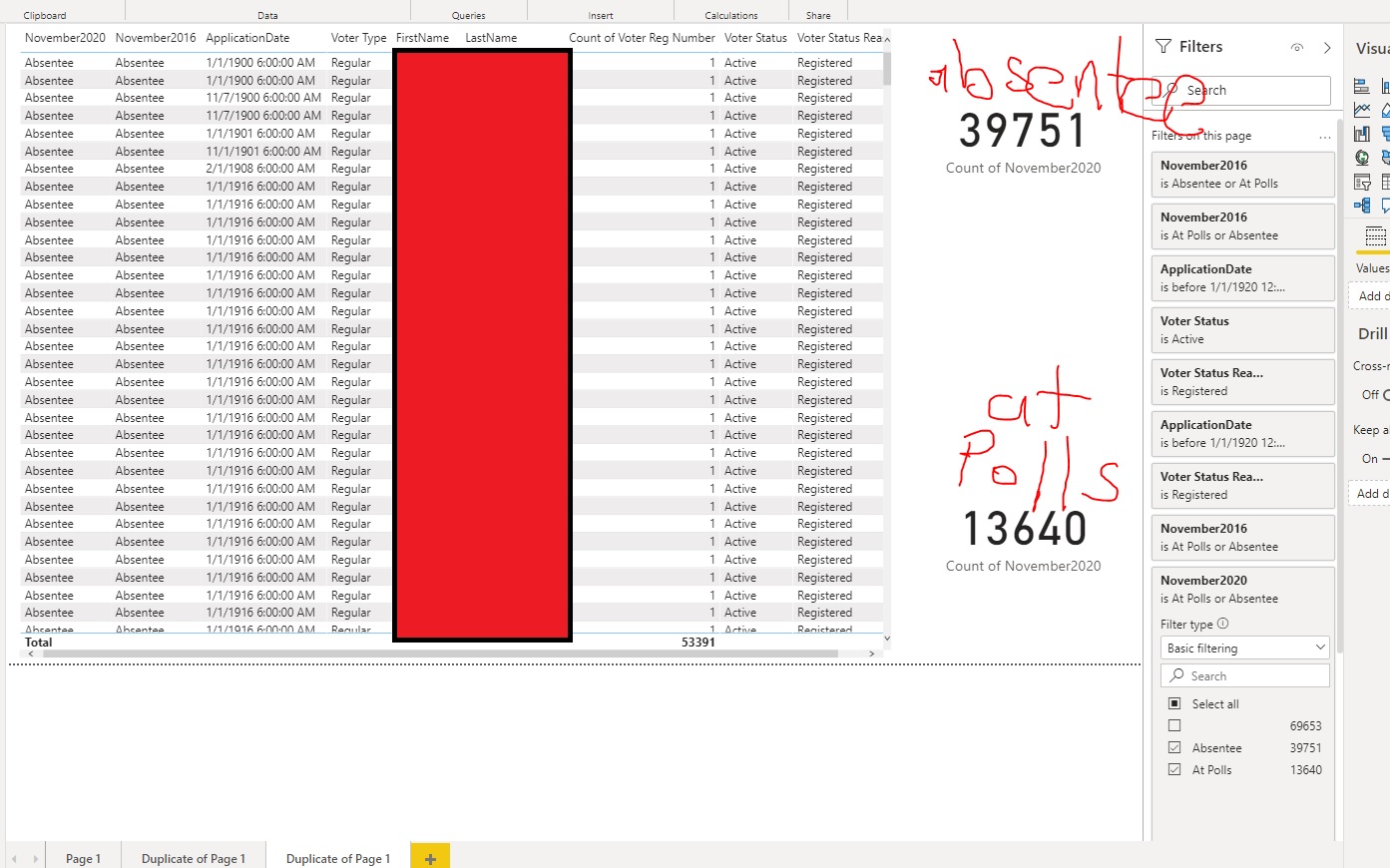 Don 't mind the hand writing on the image above.  Some of the folks that have to analyse this stuff are Savants.  As in idiot-savants.  They have enormous brain power, but can be severely lacking in more basic skills.

It's the price they pay for ultra-genius-level thinking skills.

In the far right column you see that 39,751 of these dead voters, voted by Absentee Ballot, while 13,640 of these DEAD VOTERS, came to a polling place and cast a ballot.

Not bad for dead people!

Another so called system ‘glitch’, in a county in Wisconsin is directly affecting who won. Evidence was provided to us that showed that the vote totals for Rock County appeared to be switched between President Trump and Joe Biden. 9,516 votes were eliminated from President Trump and moved to Joe Biden. This 19,032 vote difference when corrected would eliminate Biden’s lead in Wisconsin.

Senator Ted Cruz confirms that a "software clitch" seitched votes from Trump to Biden;  6,000 votes in one county!   That same software is in 47 other Michigan counties.  If they all made the exact same error, that's 282,000 votes taken away from President Trump!

Former Michigan Assistant Attorney General Zachary Larsen testified that at the convention center in downtown Detroit, election officials appeared to be processing a “majority” of mail-in ballots from ineligible voters that were not listed in the poll book of eligible voters, nor Larsen’s scanned list.  Worse, Election Worker Assigned New Names To Voters When It Appeared Absentee Ballot Was From Person Who Already Voted!!!

Of course, no Democrat-run area would be complete without PHONY BALLOTS brought-in during the night:

Detroit Poll watcher: At 4:30 a.m. on Nov. 4 "tens of thousands of ballots" delivered from out-of-state

"Unlike the other ballots, these boxes were brought in from the rear of the room"

"I specifically noticed every ballot I observed was cast for Joe Biden" pic.twitter.com/wFHhGsxEWS

Former Mayor of New York City, and US Attorney Rudy Giuliani, confirms that employees from within DOMINION - the software at-issue in this story - have come forward and are willing to testify under oath that their software was specifically designed to be able to steal elections.

What you are seeing in all of this, is deliberate criminal theft of a US Presidential election.

There is more.   Much more.  It will be published.

The mass-media outlets ALL have access to this same info, but NOT ONE is yet reporting it.  ABC, NBC, CBS, they all have this.  CNN, MSNBC, CNBC, FOX NEWS, they ALL have it.  Not one report.

The mass media is concealing this election fraud.

The Hal Turner Radio Show and thousands of intrepid Americans, are exposing it.

On 11 November, as this story was being written late at night, a woman on Twitter asked publicly "What do we know about Dominion?"  President Trump responded personally!  He replied "They tried to alter our election and got caught?"  Here.  Look:

It attempted to alter our election and got caught? https://t.co/J8mcH4SpxG

This isn't Hal Turner saying it; it is the President of the United States saying it.

We are in DANGER over this information.

You need to start telling your family, friends, neighbors, co-workers, and others that what's going on here is FRAUD.   Complete, deliberate FRAUD.  Joe Biden did not win election.

Because unless the general public starts getting a sense that they've been snookered, the country that is the United States of America, will die.  By fraud.  Perpetrated by people so craven for power, they were willing to steal the votes of millions of people to get it.

This is the type of situation where in these power-crazed maniacs might do something to divert attention from the fact they've been caught. Maybe they try to shut down the Internet to stop the spread of truth.  Maybe they start a big war somewhere, like . . . . Iran . . . . to divert public attention.

The people striving to take over power will not stop.  They will do what they must to conceal, obfuscate, silence, or kill, to prevent the American people from catching on.

Eventually, they end up doing what all power hungry maniacs do: They kill to get or keep what they want.

The American people have to stop these power crazed maniacs now before we become the ones they start killing to keep their ill-gotten power.