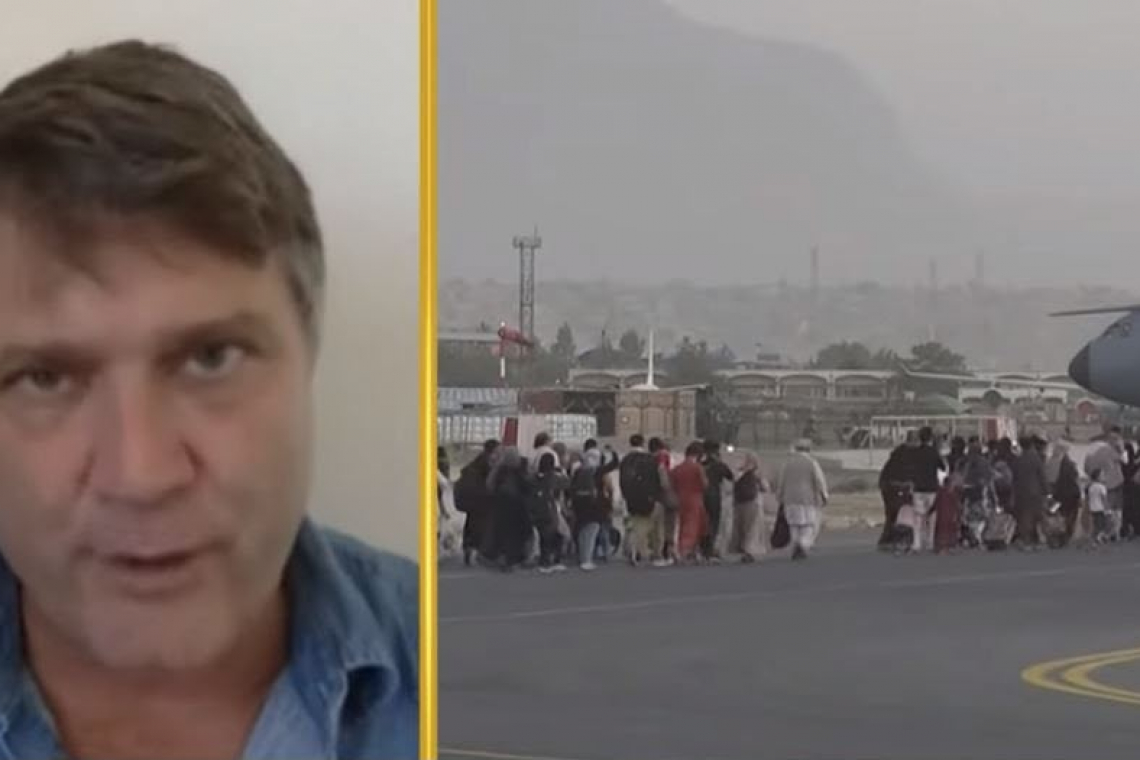 The United States knew who the Kabul Bomber was and had a Predator Drone LOCKED-ON to his vehicle before the blast, but DENIED PERMISSION TO FIRE, allowing the bomber to kill 14 US military troops and 140 civilians.

# SABOTAGED? — Rick Geise 2021-09-01 23:42
Consider the possibility that the U.S. military was sent to Afghanistan to suffer the same end result as every previous military power... however, the best laid plans of the Deep State were monkey-wrenched by the American Warrior (e.g. Chris Miller/12 Strong).

Were the recent events in Kabul ALL to undermine our victory and position of power over there?
# Hmm lets see — Woulf 2021-09-02 00:55
Green new deal, electric cars and lithium mines equal . Belt and Road, funny that huh?
Some that were left behind need to be brought out. As for the PMC psycho mercenaries left behind, Shia law.
+5 # WHY IS EVIL SO BOLDEN? — Nevada Swede 2021-09-01 20:31
I believe all of this it keeps getting worse because we did not focus on the VOTING FRAUD!

Had we really fraught at the grass roots level and really pushed harder and pushed much faster, we just would have kept the opposition off balance before they could maneuver & defend themselves.

ARE WE SO STUPID AND SO WEEK-KNEED COWARDS TO LET THESE COMPROMISED VOTED REPRESENTATIVES LIKE MITT-R...etal PUSH US AROUND & STEAL OUR BIRTHRIGHTS & OUR WEALTH?

DEFEND OUR VOTING RIGHTS!
# History — Woulf 2021-09-02 01:21
Why do people never remember there history? What happened to JFK? What did he stand for?
How about Ronald Regan? Never could figure out if he was good as a acting President or good at acting as a President. Either way Nancy was always nice. Who was his VP at the time?
What did they all have in common? Every one who did these things were "crazy"? Even Ruby (ex FBI).
They say "present proves past", screw that past proves present!
+7 # RE: Former Asst. Sec. of Defense: Military had Predator Drone LOCKED-ON to Kabul Bomber Vehicle; DENIED PERMISSION TO FIRE — JFY 2021-09-01 18:40
.
Even Ray Charles could see that this is but the latest outrageous action in the vilest case of treason of epic proportions in the entire history of the United States.

The few remaining loyal CO's in the armed forces should finally reach the inescapable conclusion that this entire bogus, usurping "administration" is a government of occupation filled to a man/woman/whatever with enemy combatants, and should be treated as such.

This isn't incompetence, this is full, premeditated treason.

For this little gem of abject treachery I think summary executions are in order.
# This stand-down order makes perfect sense in context of the doctrine of Endless wars! reigning in Washington for decades! — Harnaś 2021-09-01 17:35
Since we will be going to war with Iran as Israel's ally in about 3-6 month, or whatever it takes to turn Israel's Air Force 25 F-15D fighter-bombers into shiny brand new F-15EX at the American taxpayers' expense, who cares what happens in Afghanistan, right? It can always be sorted out later after all. In fact as we discussed earlier Mossad/CIA has a deal going with Taliban to keep an eye on Iran form the western portion of Afghanistan.

America is just a captured operation and does not matter from Israel's standpoint, because we are not a part of the Bunting Cloverleaf map of the world that the Neocons/Khazars across the pond follow to build the Greater Israel from Nile to Euphrates river!
https://i.pinimg.com/originals/7d/40/7c/7d407c7a9a082f5fd205f915146b5d35.jpg

I have come to believe the social media aspect of the Internet is largely to blame for this apathy. This would include message services like IG and Twitter, interactive social media like FB, blogs, and even alternative news sites' comment sections. On all these, I see all kinds of people objecting loudly to injustices, criminality, economic robbery, government excesses, the ongoing communist revolution perpetrated by Democrats, killing of babies, vaccine dangers censorship, and so on. But once you read of these abuses, all you can do is forward or comment further, such as I am doing now.

None of this activity can galvanize people into action, because in effect all these Internet communication services do is shuffle comments and some news along with them. The news is valuable, but the comments just dissipate. With social media comments and postings, there is no inherent force bringing about a group resolve to act. Worse, communicating by Internet services on weighty matters such as above only makes one feel more isolated, not less, because you comment or forward or share some damning information, and then there you are, sitting all by yourself once more. This has never been more evident than watching a social media "strike" be called, and thousands of people chime in with "likes", and then very, very few actually do it. That's because, in my opinion, they don't have that necessary intimate feeling they are Many. One has to wonder, "will I be one of only a few truckers who really shut down ?", and that will actually be the case as everyone feels that way ! Even when we see stuff going "viral", meaning a huge cascading series of posts, we observe nothing happens, other than a lot of people find something out. The classic of late was the election fraud, complete with postings of videos and rational and analytical proofs of election fraud. No matter how much of a "blockbuster" someone like Mike Lindell presents, again, nothing really takes hold for action in the general public, or even a small percentage thereof.

We feel no presence of kindred spirits through a wire or satellite. And we're not talking violence, what I mean is collective, palpable outrage that causes the guilty great fear of public response. Right now, they have none, and I blame the palliative effect of just "post and then go on" Internet. The hypnotic and dulling effect of this has allowed leftist and liberal activists to gain the upper hand, and the result is the country is in runaway decline and corruption.

Indeed, we must analyze why the Left has been so successful in opposing Good and Right forces that used to at least have some dominance in America. And what evoked actual social rectification in the past, the distant past, i.e., pre-Internet ? I think the common denominator for the Civil Rights movement, the Vietnam War protests, , and even going back to Coxey's Army and the like is: real physical meetings between real people. These need to take hold, and vastly downplay Internet dependence as they operate. I have been watching the Volusia County, FL preparedness group, who meet regularly and discuss issues, and they are actually affecting local lives and politics. If enough of these can form elsewhere in the States, then they can correspond with one another after they have educated themselves, free of censorship, monitoring, trolling, nut cases, agitators, and generally evil people. They can look around and see who they are talking to, and sense whether they are in a group of like-minded people; enough people to make an ever-increasing difference. It is this eventual correspondence that can lead to real events. It is commitment; a commitment the bad guys have been practicing, while we have been wallowing, to a much too large extent, in Social Media torpor.

The Left understands this small/medium group meeting phenomenon, and is exploiting it tremendously right now by having actual physical meetings and planning. They have now achieved, with this, critical mass in that they have seen their influence creep into schools, government, young society, and corporations over a long period of time. Yes, human nature tends to evil anyway, but especially so when the general public of the Right never have enough gumption to form meeting schedules and make plans. The Left does so. We are to oppose evil, to try our hardest for it to not triumph. Talking to one another on the Internet venues is just that - talking. There are no other personal dynamics forces to spur further action; by its very nature, there can't be.

An internet group will never send out a lawyer to file suit, or send a delegation to demand a local radio station take on a conservative talk show ( like Hal's ), or etc. We can't keep relying on the one or two parents chewing out a school board or City Council, or calling in with some truth to a radio talk show. It is nowhere near enough of a presence, no matter how good the presentation ( cf. Dr. Stock's amazing school board address ). We have to all invest in time together to set goals of how we are going to filter our community influence up the chain of command. I am planning to start this by beginning meetings in our local community hall for local residents only ( 6 months or more ). These will be first informative with hopefully the entire group contributing, then onto forming common goals and desired achievements in our local civil society.

Posting things in comment sections and social media is wasting our time, and is exactly what the Left and Progressives hope we do. Don't ask me to report later on how I'm doing - that would just be perpetuating what I have decried above - think it through and act as you are led, for yourselves.

The end time beast system will be the revived
Ottoman empire. Serious scripture study
proves that it is not Rome as the evangelical
Zionist rapture cult claim.
+2 # RE: Re: "The evil! The sheer EVIL! Beyond comprehension!" — JFY 2021-09-01 18:23
.
The turks have always been bad news of the worst kind wherever they have gone ever since they slithered out of central Asia over a thousand years ago.

They are no one's friend. (except for the devil).

In the last 20 years or so they have sent containerload after containerload of combat shotguns and other infantry weapons, and tons of ammunition to practically every filthy mosque in Europe for the day when they give the order for all the muslim invaders to go out and start killing Europeans to take over the continent in one fell swoop while depopulating it at the same time so that the turks can extend their filthy sultanate clear to the Atlantic Ocean, and from the Med on up to the Arctic Circle.


The Bible clearly states that the seventh, of
the worlds historical beast systems, will be
revived, and become the eighth and the end
time beast system.

While John was on the island of Patmos
writing the Revelations, Rome was the sixth
and current beast system in power,
persecuting Christians and feeding them to
lions.

After that, the Ottoman Empire spring up and became the seventh beast system, which received it's deadly wound in 1922.

The Ottoman Empire is now being revived
right before our eye's and will become the
worlds eighth and final beast system of the
end of days. The anti-Christ very well may be
Recep Tayyip Erdoğan who dreams of
reestablishing the Ottoman Empire and has
stated so.


__/ __/ __/ __/
Ottoman Empire, empire created by Turkish
tribes in Anatolia (Asia Minor) that grew to be
one of the most powerful states in the world
during the 15th and 16th centuries.

The Ottoman period spanned more than 600
years and came to an end only in 1922, when
it was replaced by the Turkish Republic

Turkeys “...massive killings of Pontic Greeks
and the Armenian genocide are but some of
their atrocities.

Ottoman Empire marked the peak of its power
and prosperity as well as the highest
development of its government, social, and
economic systems at the beginning of the
17th century, and the empire contained 32
provinces and numerous vassal states.
+2 # RE: Re: "The evil! The sheer EVIL! Beyond comprehension!" — Sheepinator 2021-09-01 15:43
Agreed
Refresh comments list
RSS feed for comments to this post
JComments
by sur.ly
100% Trusted Informational Platform Website 2021