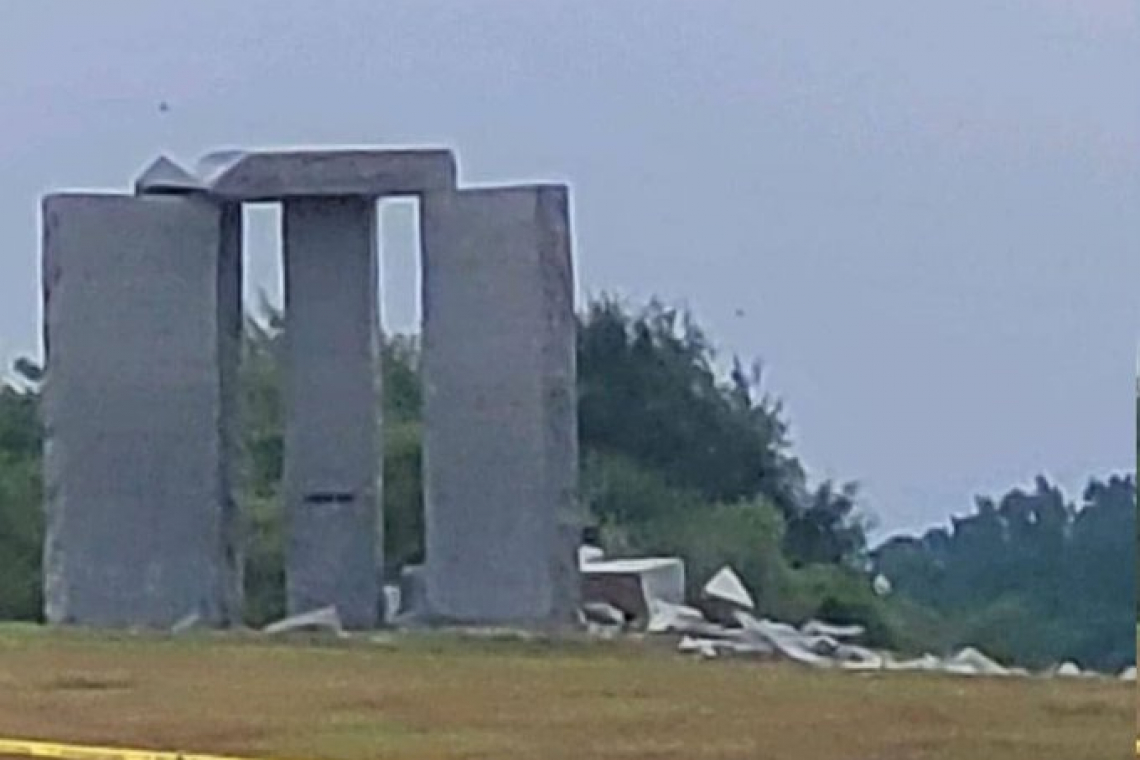 The famous "Georgia Guidestones" which promoted a human population under 500 million worldwide so as to sustain the earth, were blown up around 4:00 this morning.

Nearby residents say they heard a loud explosion but didn't know what it was.  At sunrise, the guide stones were found reduced to a pile of rubble.

"Known as America's Stonehenge, this 19-foot-high monument displays a 10-part message espousing the conservation of mankind and future generations in 12 languages," according to a description on the state of Georgia’s tourism website.

One slab stands in the center, with four arranged around it. A capstone lies on top of the five slabs, which are astronomically aligned. An additional stone tablet, which is set in the ground a short distance to the west of the structure, provides some notes on the history and purpose of the guidestones. The structure is sometimes referred to as an "American Stonehenge".

The monument is 19 feet 3 inches (5.87 m) tall, made from six granite slabs weighing 237,746 pounds (107,840 kg) in all.The anonymity of the guidestones' authors and their apparent advocacy of population control, eugenics, and internationalism have made them an object of controversy and . . . conspiracy theories.

Well, it appears that someone decided to make a statement about the current ongoing nonsense plaguing our country and our world.  When it comes to population control, global Communism (You will own nothing and be happy) and Internationalism, perhaps the message sent today was a bold "No thanks."

The so-called "elite" seem to think THEY know what's best for the rest of us, and they attacked the general public with the bio-weapon "COVID-19" to start killing us off in pursuit of their grand plans.

Then they came at us with their phony mRNA "vaccines" which are killing-off millions more of us around the world.  They thought they got away with it.

Then they came at us with "supply-chain disruption" which they initially blamed on COVID.  Now that COVID is over, and the supply chain issues are getting worse, it is becoming clear to even the village idiots that this is all being done deliberately.  Surreptitiously.

Trouble is, no one asked The People whether any of __us__ wanted these grand plans. No one asked us if we wanted to "own nothing and be happy." The "Elite" just went and started DOING what THEY wanted with the rest of us.  THEY started adversely affecting OUR lives. They didn't ask. They didn't care what we thought or what we want; they just implemented THEIR plans and the rest of us be damned.

Last night, someone apparently decided to send them a message that their plans are over.   Someone blew up the Georgia Guidestones.

Do you think the "Elite" will take the hint, or will their arrogance over-ride reason, and cause them to push even harder?

My bet: Their ego and arrogance will come unglued and they'll go balls-to-the-wall now.

You see, with the destruction of the Georgia Guidestones, THEY know, that WE know.  All the nonsense going on with COVID, the vax, the supply chain troubles . . . are all deliberate.  They are all part of the plan to destroy our way of life so THEY can . . . what phrase are they all using . . . . Oh, yes . . . . "Build Back Better."

In my opinion, if they're smart, they will now realize that people are WILLING to blow-up their symbols, their plans, and maybe even them!  I certainly don't advocate that and I absolutely have no plans whatsoever to engage in any such behavior personally.  Neither should anyone else.

But since the Elite have already taken to actually killing us with COVID and their phony "vax" they drew first blood.

If the explosions continue, or get personal for the "Elite," it seems to me they will have brought it upon themselves.