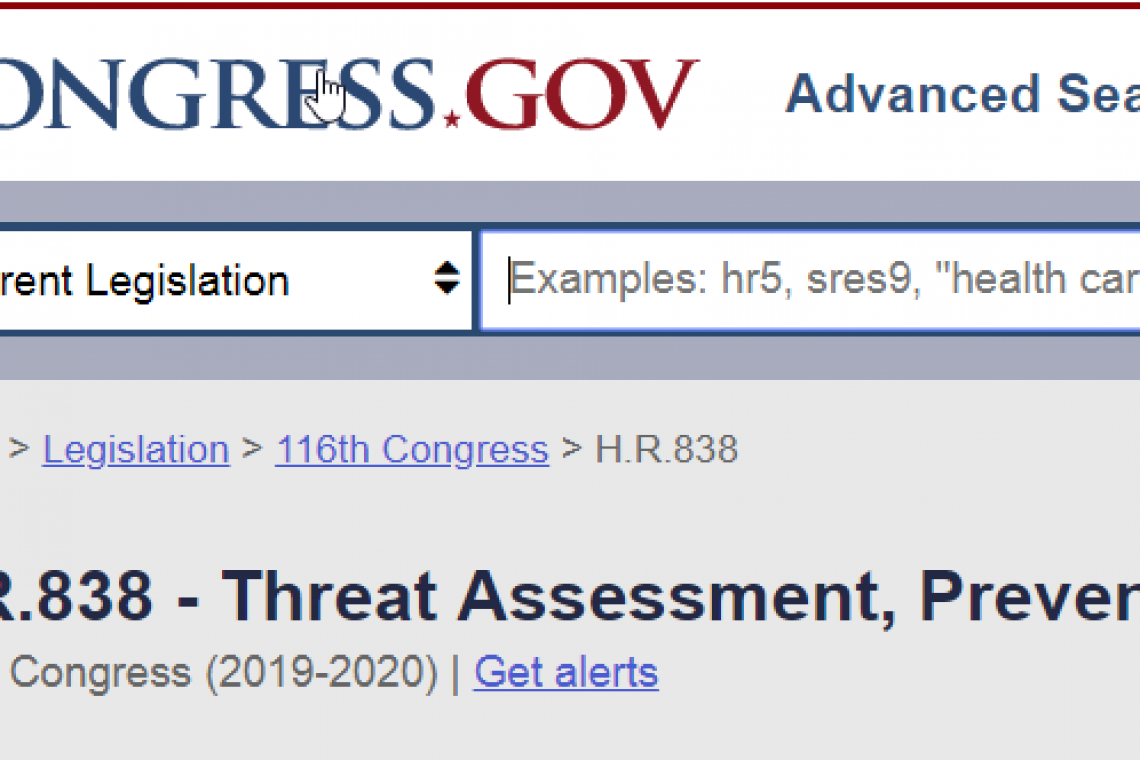 The text of the TAPS Act, “Threat Assessment, Prevention, and Safety Act of 2019,” gives unlimited and arbitrary authority to 24 bureaucrats. It is written in double-speak with loopholes for the pencil pushers. Bottom line — it’s a behavioral police force that self-empowers to deprive us of our constitutional rights if they don’t like our behavior. It’s bipartisan too!

The bill doesn’t mention guns. It is meant to control people, period. It’s very Orwellian. This gives you an idea of where our politicians want to take us, some with the best of intentions.

It is reminiscent of the Alien and Sedition Acts of 1798. That act was ostensibly meant to control threats in a so-called war with France, but it was actually a means to control political speech. The President could deport anyone he deemed dangerous without affording the person any rights and it made it illegal to “defame the government.” It was a joke and it was abused immediately.

The TAPS act violates our constitutional rights. It gives the Department of Homeland Security the right to appoint 23 unelected pencil pushers to “identify individuals who are exhibiting patterns of concerning behavior” and to manage those Americans somehow, some way. They would become a policing body ruling the behavior of Americans as judge, jury, and executioner.

The “Joint Behavioral Threat Assessment and Management Task Force” would consist of one government employee at a GS-15 level or higher and 23 selectees chosen by the politically-appointed Secretary. The people would not even get to elect any of these people.

Their job would be to select those individuals who show “concerning behaviors” and create an authoritative power on the federal and local level to watch over them and control them.

Who gets to define “concerning behavior?”

And, they don’t need a criminal act to do this. Thought crimes will do. If the person is interested in committing a crime, that’s enough.

The DHS will then be “empowered” to implement these arbitrary rules with no acknowledgment of any of the rights of the people.

It’s a great way to usurp our rights, our entire Bill of Rights.

The bill, in fact, makes no mention of our rights. They will have the power to invade our privacy and get whatever they want to support their concerns without due process or privacy rights.

It completely circumvents the 4th Amendment.

The act does not define the meaning of the word “manage,” but the task force has the power, once authorized, to “take any action which the Task Force is authorized to take by this section.”

The measure, introduced in January, and sent to committee in March, allows the task force to develop its own “guidelines and best practices” to devise a “national standard” of action.

Congress will have no authority over this band of authoritarians and relinquishes its responsibilities. The band of bureaucrats will have to submit an annual report. There is no accountability per se, they just tell Congress how they are doing. It’s a rogue government within a government that polices behavior.

In case you’re wondering who will get on this list — to start — check out the new definition of a domestic terrorist on this link. If you act as a canary in the coal mine, you could be labeled a conspiracy theorist and that gets you on the list. The agencies have been politicized by the left but no one is safe if we lose our constitutional rights. First, they will come for the right, then they will come for everyone.

The Red Flag laws won’t be much different. They take away due process. It’s dangerous. Dana Loesch provided an example on Twitter:

Red flag laws at work, just last week:
“… man had his firearms confiscated simply because he had the same name as a criminal"
Had to bear the full legal cost a month later to defend himself in court: https://t.co/psqZASxPKQ
Original: https://t.co/u4uQgDnSFJ#2A