HURRICANE HAS **NOT** TURNED; STILL HEADING TO FLORIDA 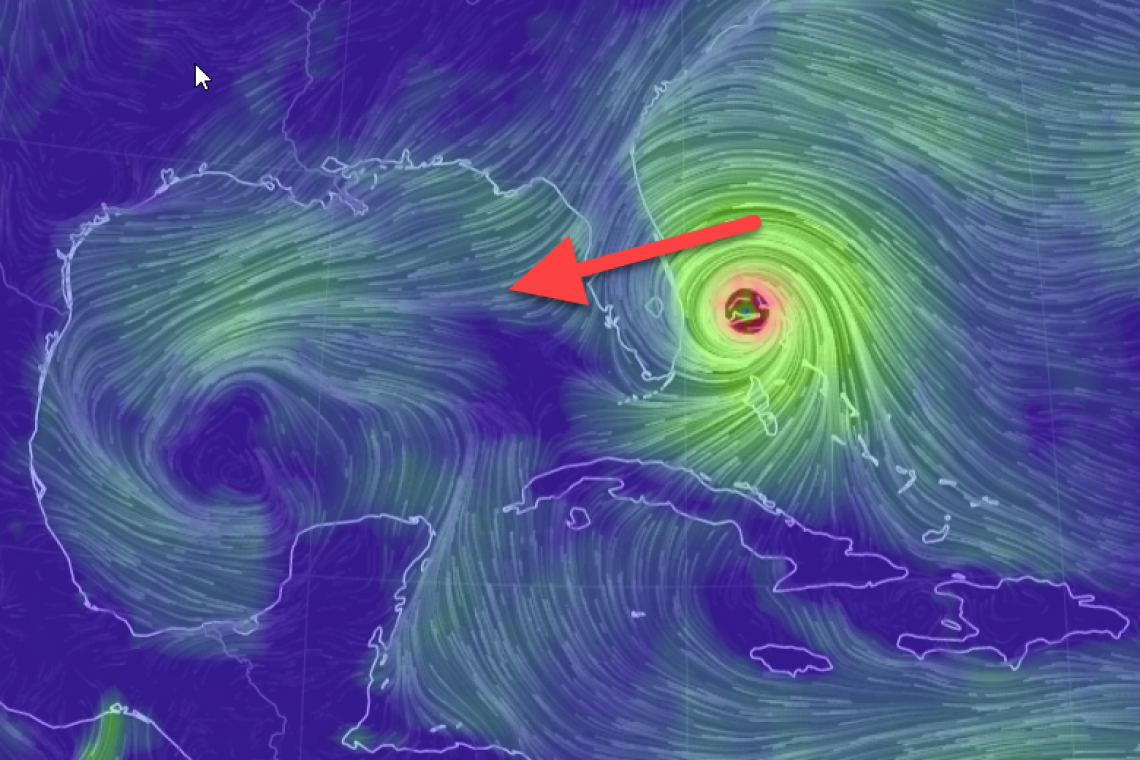 For DAYS, so-called weather "experts" and their nifty computer "models" have told us that Hurricane Dorian would turn to the north and go out to sea, missing Florida.  It hasn't done that.  Because of horrible forecasting, many Floridians went to bed last night thinking very little about this storm and are now waking up to a full blown Cat5 Hurricane on their doorstep.

Hurricane Warnings have now gone up for many Florida Counties and EVACUATIONS are being ordered.

As of 8:00 AM EDT Monday, September 2, Hurricane Dorian is still moving WEST toward Florida, now at 1 MPH.

Dorian is now tied for second-strongest Atlantic hurricane ever.

For those that can't comprehend,  here it is:  the blue arrow is what it should be doing according to the EURO, GFS, NAM, and the other 5 models NOAA is using. The pink arrow is what Hurricane Dorian is actually doing:

Behind closed doors the forecasters are confounded. They appear to some people to have made some mistakes interpreting the early data and that resulted in bad models. But instead of admitting their oversights and correcting the models with better data, they are crossing their fingers hoping their bad predictions come true anyway. The truth is they don't know because Dorian has broken so many known patterns of behavior.

The "down and dirty" of this situation is that to even untrained casual observers, it appears Dorian is not going to turn until after it makes landfall in Florida. The models are wrong... NOAA is using the same models that failed to predict Maria and Irma correctly.

Dorian isn't gonna turn.  Here are the upper level "steering winds" and you can plainly see the white line immediately atop Dorian is moving . . . . WEST!

It was supposed to be heading north of Grand Bahama by now but instead he's moving straight down the island with a slight -south- of west component instead.

If we were in Palm Beach or anything 50 miles north or south of there then we'd be getting worried right about now.

Boca Raton, Delray Beach, Boynton Beach, Lake Worth, West Palm Beach - It's got you in its sights!

Here's how close the storm is to Florida as of Midnight eastern US time: 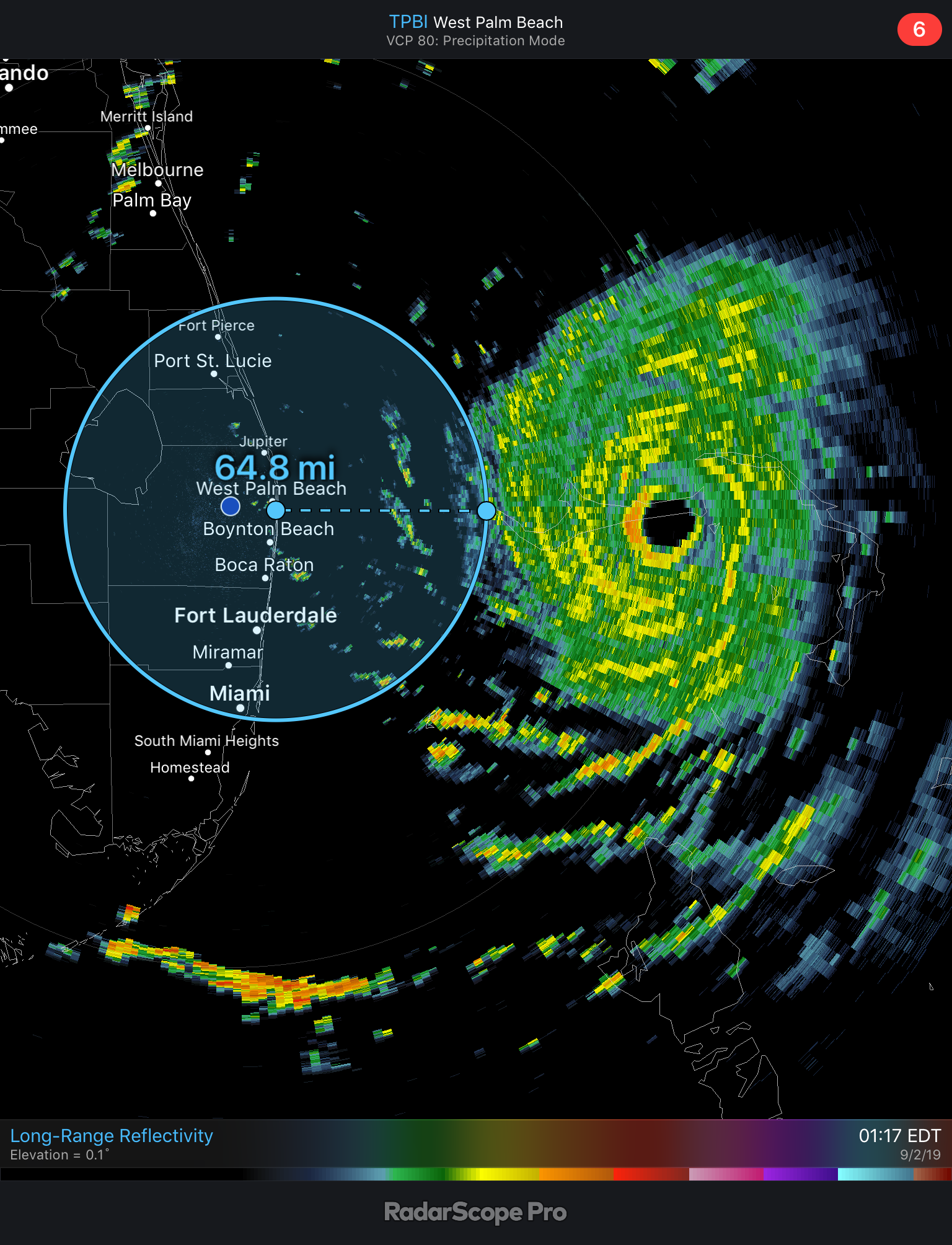 To give you an idea of how "off" most of the computer models have been, the image below takes the GEFS models the weather experts have been using, and overlays the ARCHER actual satellite positioning.  Most of the "models" have been very inaccurate: 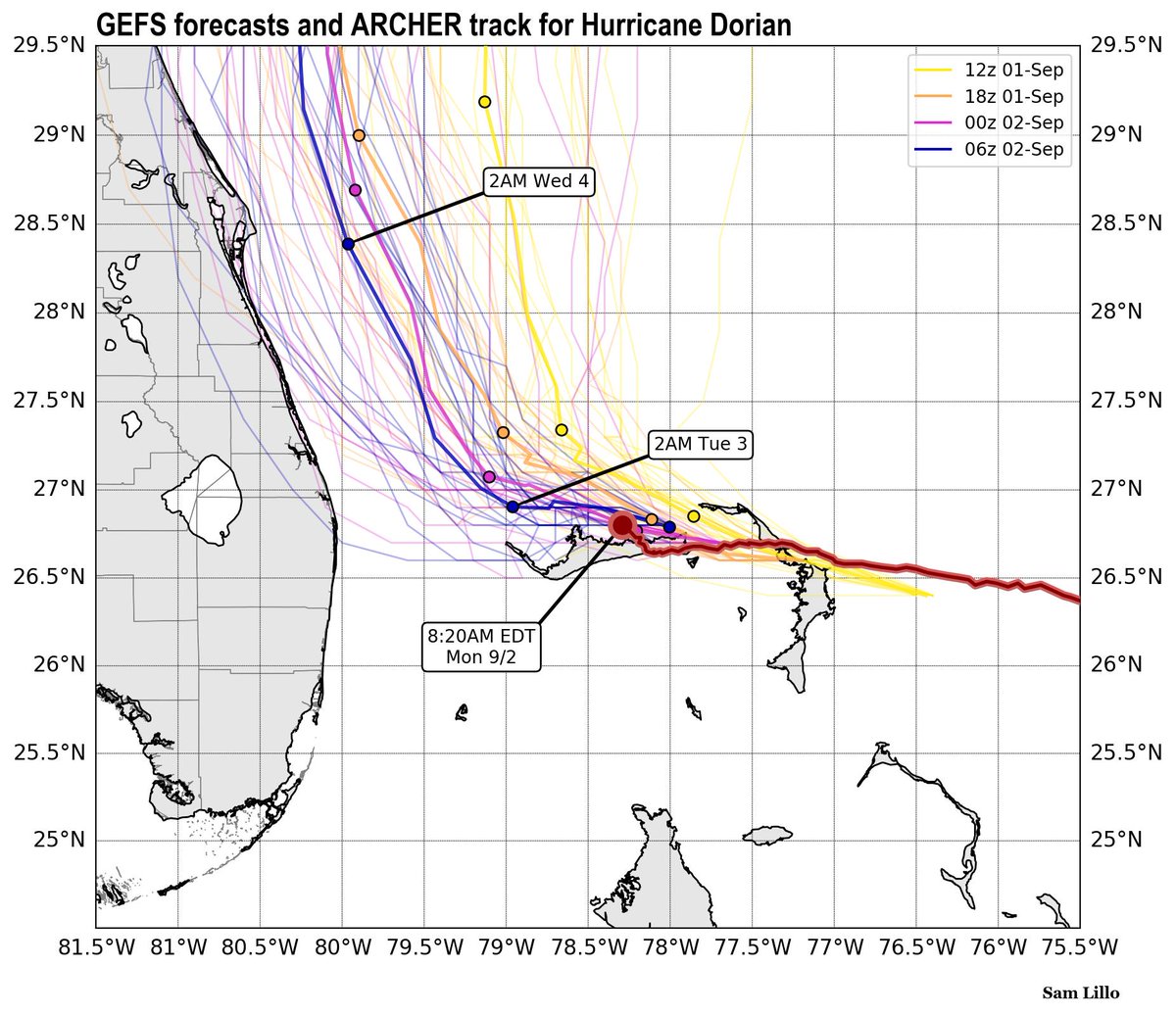 This is a life-threatening situation. Residents on Grand Bahama
Island should not leave their shelter when the eye passes over, as
winds will rapidly increase on the other side of the eye. Residents
in the Abacos should continue to stay in their shelter until
conditions subside later today.

These hazards will continue over Grand Bahama Island during most of
the day, causing extreme destruction on the island.

Evacuation info and additional reporting pending shortly, check back for updates below . . . .

The image below was taken at 9:31 AM and shows the hurricane still spinning over the Bahamas AND GROWING IN SIZE!   Watch and you can see the wind field expanding dramatically:

You can also see the storm is **NOT** moving north.

As of 10:00 AM, folks in Florida still have time to evacuate if they leave very soon.  The wind speeds of this storm are still between 165 and 185 Miles per hour.  Confirmed gusts to 200 MPH.  If this storm starts moving west again, YOU could face those winds and wind gusts; YOU would lose.

If you wait to evacuate, and the storm begins to move, then YOU and EVERYONE ELSE will be trying to flee at the same time.  If you leave early, you have much better chances.

A sustained wind of 40 mph with a gust up to 48 mph was observed at Juno Beach Pier at 12:59. This is the first sustained tropical storm force wind observed in South Florida from Dorian.

Here is a snapshot of the weather radar from Miami: 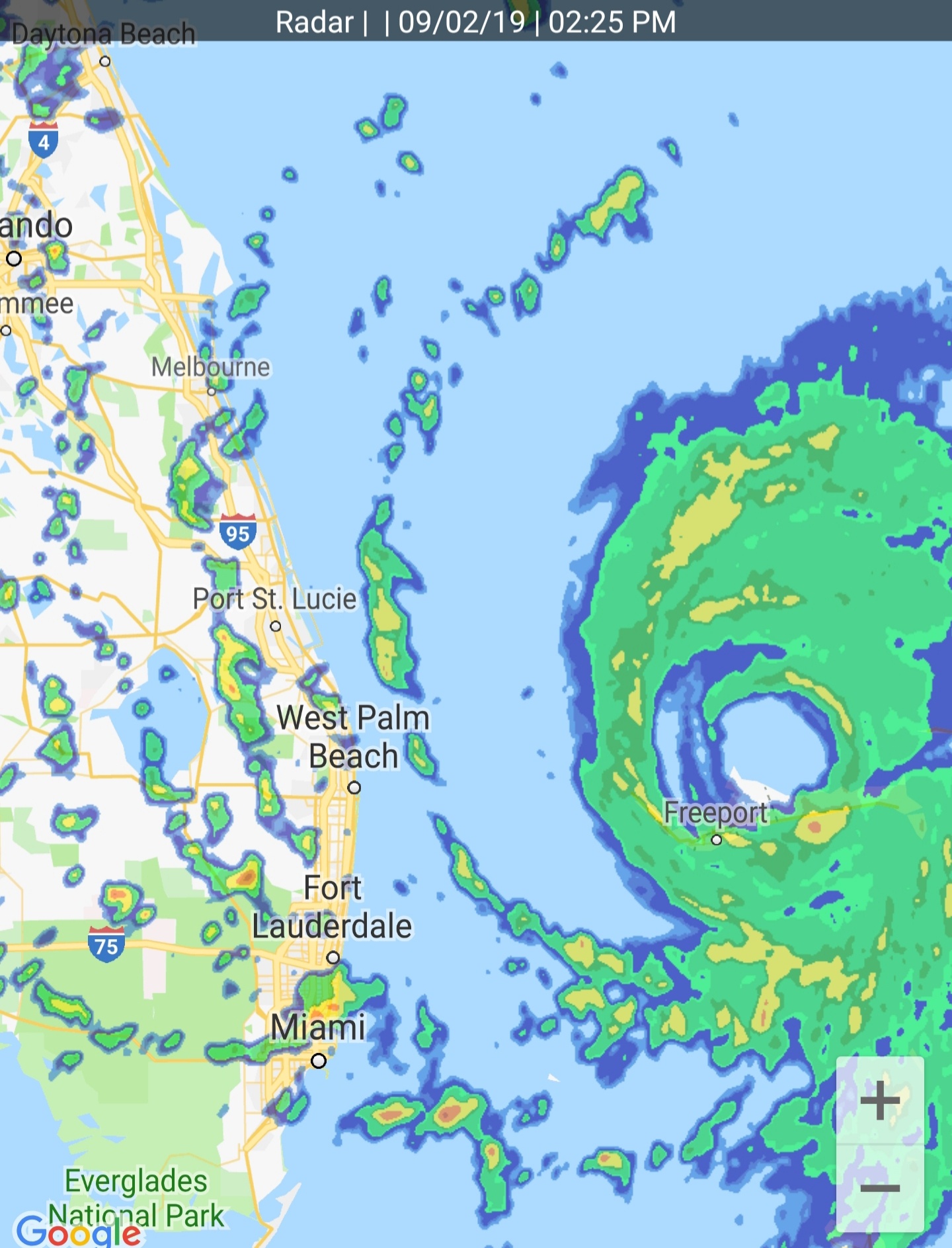 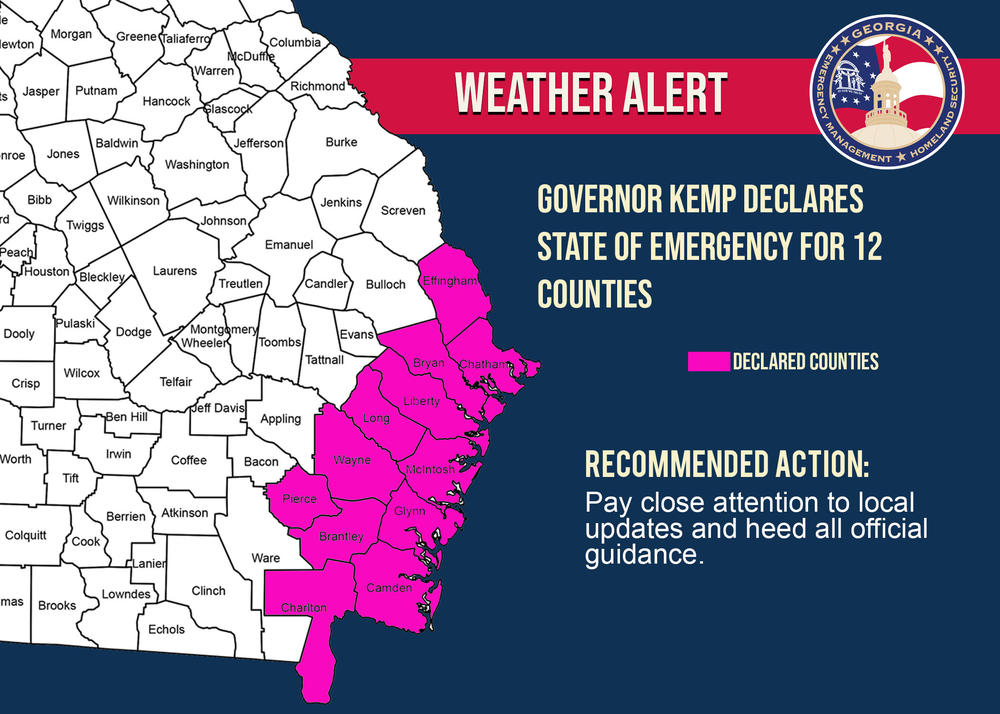 In the state of Georgia, based on information from GEMA, Gov. Kemp will issue issue an executive order for mandatory evacuations of the six Georgia counties East of I-95 starting at Noon today. Will also order “contraflow” on I-16 starting at 8 AM Tuesday.

The Storm Surge Watch has been extended northward along the Georgia coast to the Savannah River.

The Hurricane Watch has been extended northward to Altamaha Sound in Georgia.

NEW 3:45 PM EDT -- The Richmond County Schools System will be closed Tuesday, Sept 3 through Thursday, Sept. 5 in an effort to support evacuees from Savannah-Chatham County affected by Hurricane Dorian.

Storm Surge Warning has been extended northward to Altamaha Sound in Georgia.

Virginia Governor Ralph Northam has declared a state of emergency as forecasters. Although forecasters predict that Florida, Georgia, and North and South Carolinas will be hit hardest as the storm makes its way north, parts of Virginia may be affected as well.