A new powerful earthquake shook Southern California late Friday, one day after a 6.4 magnitude earthquake rocked the region on the Fourth of July.

A 7.1 magnitude quake struck Searles Valley Friday at about 8:19 p.m. local time along the same fault line as the July Fourth quake, authorities said. Seismologist Dr. Lucy Jones, from CalTech, called the quake on Thursday a foreshock, ahead of Friday night's even bigger quake.

Ridgecrest, California, fire officials were responding to multiple fires and gas leaks. Mayor Peggy Breeden said the city was dealing with some injuries. The Los Angeles Fire Department went into earthquake mode, standard procedure to get trucks out of buildings and begin searching for damage, but later said they had completed their survey and found no issues.

A small number of power outages in Los Angeles were reported, while about 1,800 customers lost power in Ridgecrest, officials said.

Two 5.5 aftershocks hit the same region in the hours after the 7.1 quake. 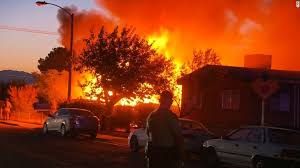 The quake shook Dodger Stadium in the middle of Friday's baseball game. The NBA's Summer League, playing more than 230 miles away in Las Vegas, felt the shaking and called off games for the rest of the night.

The was no ground stop issued and no reported delays at Los Angeles International Airport.

"On behalf of all Californians, I offer my heartfelt support to those affected by tonight’s earthquake near Ridgecrest," California Gov. Gavin Newsom said in a statement. "The State of California will continue to offer support to aid residents in the region.

Earlier Friday, ABC News correspondent Eva Pilgrim was filming when a 5.4 magnitude foreshock hit -- at the time believing it was an aftershock of the 6.4 quake.

Kern County saw more than 100 aftershocks to the 6.4 quake on Thursday, county fire officials said, and experts warned the threat is not over.

"There is about a 1 in 20 chance that this location will be having an even bigger earthquake within the next few days," Jones said earlier Friday.