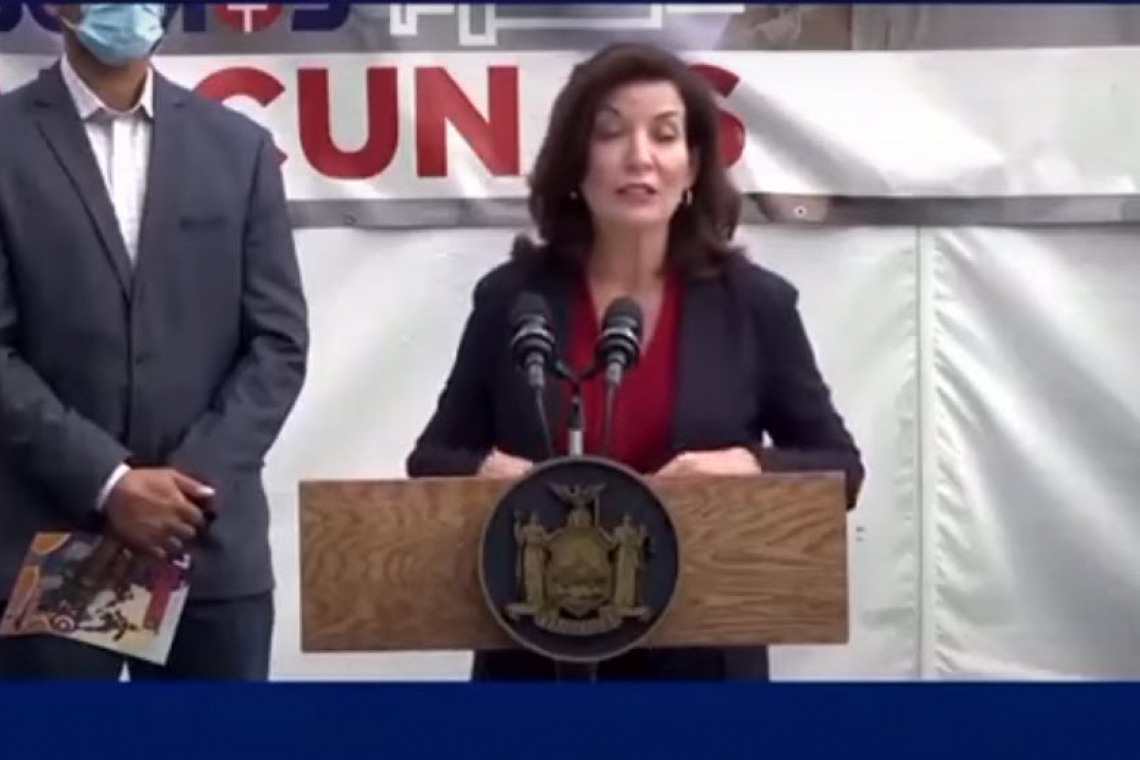 The media in the media capital of the United States, New York City, is eerily quiet tonight as tens-of-thousands of New Yorkers take to the streets to protest the Vaccine Mandate going into effect at Midnight tonight, Monday.

All healthcare workers in the state must get the death-dart/clot-shot (masquerading as a vaccine) or they will lose their jobs in the morning.

# John 8 — Aravinda 2021-09-29 18:58
people do not understand we are dealing with a vast percentage of the population who are the sons and daughters of the father of lies.

as it says, they love the lie, and they hate the truth. This is why madcow is one of their priests for the false god government.

The sooner people realize this, like in the movie they live, the sooner they realize these creatures are not the same.
# Regarding the Walmart body bags — Pierre Derelicto 2021-09-29 10:26
There has been much published about the underground tunnel network, connecting Walmarts all over the country; as well as alleged interior designs of many of these stores, suited for quick and simple conversion to mass incarceration facilities.

Forklift loads of body bags would fit right into that scenario.
+1 # **NEWS FLASH** for "The Governess" — Pierre Derelicto 2021-09-29 10:20
If God were in any way involved in a vaccine, I seriously doubt one of its principle ingredients would "Luciferase."

... just what New York needs: another self-righteous, moronic wannabe tyrant.
# If It's true.. — Doug Brown 2021-09-28 23:48
If it's true...
If what they say is really true...
Meaning what Dr. Sherri Tenpenny, Dr. Lee Merritt and a host of other world-renown Doctors and Scientists are saying.
then YES
YES Yes yes the body bags are for vaccine poisoned individuals.
One professional antivax psychiatrist was talking the other day about this very thing,
meaning, "how people are going to cope seeing thousands of dead bodies. People are not used to seeing that many dead bodies laying around."
People in great numbers will start dying, that's what professionals are saying.
+1 # Weekend warriors — Marlynn77942 2021-09-28 17:15
So .... If medically verified, accredited week-end warriors are being called up to work in hospitals, who is covering them in their day-to-day medical job?
# SHE WON'T CARE — SBGlett77 2021-09-28 19:30
Wow, excellent observation Marlynn !

That is the story in full right there in the last 2 sentences. Hal is exactly right with those 2 lines.The disease was fake for the first while until the injections started working. Now ALL the sickness is coming from those stupid brain dead morons that believed that narrative. Best hope is that ALL those ones just die quickly and get it over with. Otherwise this is NEVER going to end. Problem is we might have to wait 3 years for the effects to work on those ones. Gonna be a long wait. Just keep resisting and protesting. DO NOT take the needle or you WILL be going to hell without any salvation possible after 2000 years of being warned about it. NOBODY will be able to say they did not know.
+2 # Yeah, right — SBGlett77 2021-09-28 11:54
...
Hochul isn't listening to God - she's doing what is "right in her own eyes", a classic prescription for being turned into Hell.

People who do this kind of rationalizing know almost no scripture, or they would be convicted to obey the real God of Heaven who gave it. And they don't WANT to know any. Is she listening to God when she advocates killing babies in the womb; babies who would otherwise progress into adults like her ? No, instead she provokes God to apply scripture, the scripture she is wilfully ignorant of, to her case:
"...And also for the innocent blood that he shed: for he filled Jerusalem with innocent blood, which the LORD would not pardon". II Kings 24:4

As I've noted before, an individual who has an abortion can be forgiven it if they repent truly before God, but a public official who advocates for shedding of innocent blood, or taking a murderous sorcery product ( pharmakia ), is daring God to give them over to a reprobate mind, from which they cannot repent. Again, laid out in detail in scripture !
-1 # Cadaver Bag is a Purchaseable Item — mfanning58 2021-09-28 11:45
It turns out that you can purchase a cadaver bag as a stockable item from Walmart. Go to the online website and search for "cadaver bag". The search returns at least 9 different choices, starting at $19.86 each and going to $33.18. I suppose this could be considered part of a prepper's emergency kit or a civil defense item for first responders. So, a cadaver bag is a legitimate SKU -- nothing sinister. You can find the same thing on Amazon if you seach there also.
+1 # This Communist whore is not what you might think. — Harnaś 2021-09-28 11:23
She is Irish-Catholic (if you can believe it) with roots in Kerry, Ireland. Her Name is actually not Hasidic but Polish. Her husband if from Buffalo. According to the Am-Pol Eagle, Willian Hochul is the first Polish-American to serve as a federal prosecutor for Western New York State. Did just somebody say that both of them did not have to take an oath of allegiance to the State of Israel before getting their plum jobs? I am going to post a list of 420 Congressmen who did take such an oath, but since it will be easier to list 9 of those did not, I will publish it on the internet blackout thread!

She is a lost soul and she best repent fast or she will have reserved herself a place in Hell (or maybe she okay with that, some believe/deceived that hell is heaven to them).

She is definitely a lost soul, but you also have to understand that she is a Novus Ordo Catholic, who obviously takes herself seriously. We have several of those NO Catholic creatures on the forum, after they proudly self-identified themselves. They are indistinguishable from Protestants in their beliefs, including the Calvinist eternal salvation for ALL, which means no Hell. This is exactly what the Catholic Church has been preaching between the lines since Vatican II. This is also what the Jesuit Bergoglio, who pretends to be a pope ( not elected according to legal precepts), preaches officially behind the scenes!
# Who in particular? — Paul Lambert 2021-09-28 19:00
Who on this forum is a Novus Ordo Catholic that believes there is no Hell?
# Yes, Paul Lamebert, you immediately come to my mind! — Harnaś 2021-10-01 13:06
You are right for once, or am I wrong? Does the majority of NO Catholics, just like the heretics do not believe in Hell? I know for fact that one of my sisters does not believe in it, but then she goes to Baptists services on Sunday when a convenient NO Catholic Mass in not available in her big city! She also tell me that she does not need to go to confession anymore, because she does not sin!
+1 # To Harnas — acturner067 2021-09-28 14:48
Yep, many do not want to believe there is a real place called Hell set aside for the sinful yet my KJV states otherwise. Being a SDA which have since removed myself from also do not believe in Hell you just disappear.
+7 # God? — amsb44 2021-09-28 08:26
Those who have eyes to see know exactly who her god is.
+2 # god of this world — BakerCityTom@yahoo.com 2021-09-28 09:19
2 Corinthians 4:4
whose minds the god of this age has blinded, who do not believe, lest the light of the gospel of the glory of Christ, who is the image of God, should shine on them.
+1 # Strange Things... — ldx 2021-09-28 08:00
It's not like they're trying to hide it, I guess. Any ideas about what that room could be if it's not a gas chamber? Maybe it's a freezer hooked up to a generator. Geez
+1 # Awesome news regards demonstrations.. — Lexie 2021-09-28 06:35
So good to see the people come together as one to march in solidarity against the mandates. All we have seen so far ,coming out of the US, are the riots designed to give the impression there is deep rooted racism embedded within..not saying that racism doesn't exist but I saw none of that in the videos above. Tells me the divides they planned on creating did not happen . God wins in all his subtle ways.
+8 # Demon! — (Mizpah) Jan Pruitt & James Pruitt 2021-09-28 05:28
The Lord rebuke her!
+5 # "Love thy neighbor"**snort** — shamrockmom3 2021-09-28 02:41
Tell that to the baby who was aborted so the clot shot could be developed! That innocent life is my neighbor too, Gov!
+4 # Re: Gov. Hochul and God — Bundy 2021-09-28 01:57
She (essentially) says, [not accepting the vaccine is not accepting God].
This is coming from a woman who is pro-choice.
What happened to my body, my choice?
It's ok for a woman to kill her unborn child but not ok to refuse a vaccine?
99 times out of 100 it was the aborters' choice to get "the jab", too!
+6 # Further... — Bundy 2021-09-28 01:58
"Essential workers" who choose to not be vaccinated have now morphed into... "you can be replaced".
+2 # Yeah… — Theophorus 2021-09-28 10:13
From HERO to ZERO in a very short span of time.
# Yeah… — Theophorus 2021-09-28 10:13
From HERO to ZERO in a very short span of time.
+6 # Pharma = Sorcery — Gregg W 2021-09-28 00:55
You’ve probably heard it by now. The Bible calls this pharmacology ‘sorceries’.

When Babylon is destroyed:

Had she been speaking to a group of fishermen, should would have claimed that vaccinated fishermen have better catches.