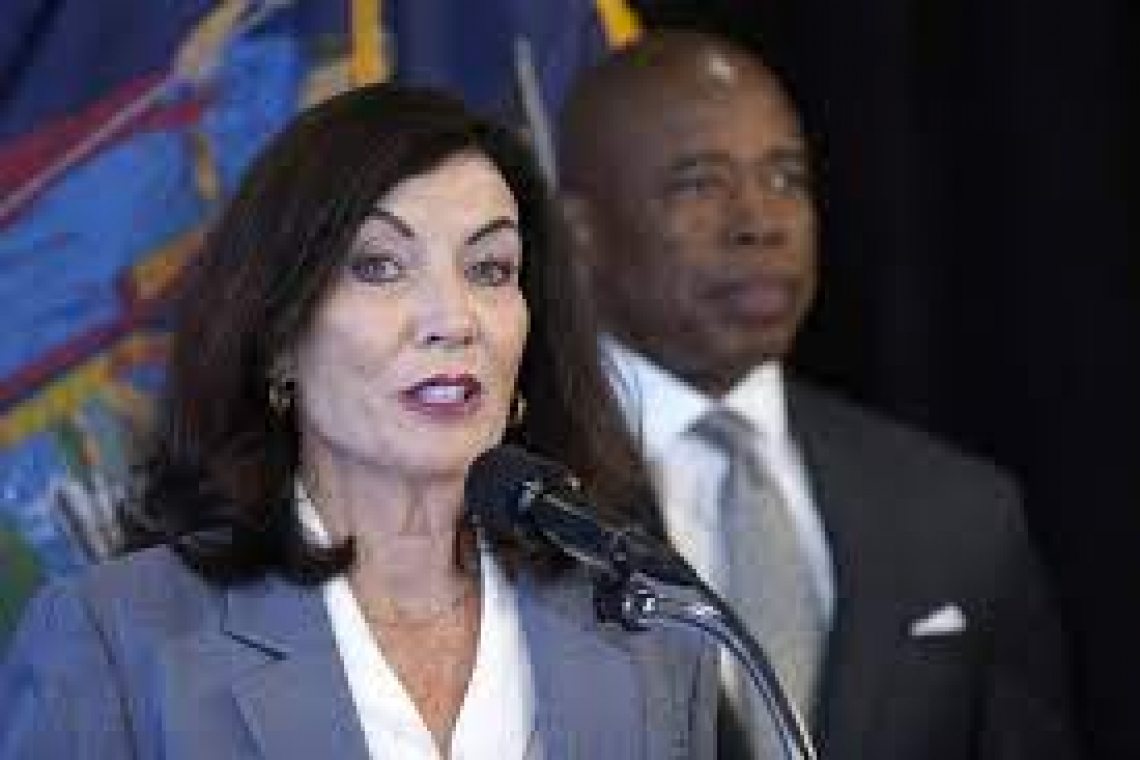 Gov. Kathy Hochul sparked controversy Monday night by saying “Trump and Zeldin and Molinaro — just jump on a bus and head down to Florida where you belong. OK? Get out of town. Because you don’t represent our values"

Wow @KathyHochul. You’re losing your marbles lady. Won’t take you up on your psycho demand to leave New York, but what I will do is get in my car right now, drive to NY-19, & do everything in my power to make sure @marcmolinaro wins tomorrow’s Special Election. https://t.co/eNesKlpvyQ

Kathleen Hochul is an American lawyer and politician serving as the 57th governor of New York since August 24, 2021. A member of the Democratic Party, she is New York's first female governor, as well as the first governor from upstate New York since the 1930s.

When democrats get what they want, crime explodes, taxes go through the roof and the economy dies a painful death.

Don't even get me started on their drag queen story times.
+14 # Female politicians — joe@tittiger.com 2022-08-26 15:00
.
Female governors and country presidents have been a well planned globalist psyop to get people to take down their defenses and skepticism of government.

She looks like Nancy Pelosi's sister.
+7 # Giuliani's Safe & Clean NYC no more — Faith11 2022-08-26 14:27
NYC is far from the days of Rudy Giuliani's safe and clean city. Now it is a crime infested, filthy hellhole,
with 60% of vacant building and with many businesses getting ready for big layoffs. NYC will need someone with
criminal justice background and economic background to revive it. Any
person that utterly lacking in this area and is dumb enough to creates a divide is clearly not the right person
+9 # RE: New York Governor Tells Trump Supporters "Leave the State" — RAFO 2022-08-26 14:22
Dear Governor, how about YOU leave and conservatives will stay… you don’t represent our values. (Side note… do Demoncrats have values… oxymoron??)
+4 # Look At Their Faces . — Doug Brown 2022-08-26 14:15
Both Hochul and Lukashenko.
Both extremely agitated.
Look at Lukashenko's clenched fists.
Look at Hochul's clenched face.
Both mad.
Neithor happy campers.
Their anger seems the feeling of the hour.
And by the way, Lukashenko is not Putin's
pal. No more than Dugin is Putin's mental
apparatus.
+6 # Stop calling them democrats, they're communists. — JFY 2022-08-26 14:08
.
People should once and for all get past their delusion that the demonrats are just "the other political party". They are communists, and the only way they accept their opposition is dead.

Re the picture that accompanies this article; just look at that face. This woman would put any Disney witch to shame. It's the face of someone who is looking for even half a chance to get rid of any opposition for good.

The sooner that people wrap their head around the fact that the communists (erstwhile "democrats") are playing for keeps and want anyone who isn't them dead, the sooner that they will start to take action at a local level to protect their communities from them. Only action at a local level will become meaningful and feasible. Maybe also at a state level, but beyond that, it's fruitless.

As an aside, if people have the time, they should give this website linked above a look. It's got a ton of good information.
+5 # RE: Stop calling them democrats, they're communists. — J Grayman 2022-08-26 14:52
[quote name="JFY"].
People should once and for all get past their delusion that the demonrats are just "the other political party". They are communists

Demonic, just like the Michigan governor, and the California governor, and the....
+4 # She Needs Her Teeth knocked down her throat. — Garyhines 2022-08-26 13:57
Hi Hal people like this why our society is moving in a communist dictatorial government Hal she needs her teeth knocked down her throat. And have her hacking up some blood .hal.where in the hell do these people come from.Hal.absolute idiots beyond words.maybe she needs to get on a bus and leave town.Hal.
+19 # RE: New York Governor Tells Trump Supporters "Leave the State" — BeenThere 2022-08-26 13:28
It appears that her values align with those of Satan....
# Her bad steering alignment is pulling to the left? — acturner067 2022-08-26 19:30
Those in high places, alignment does tends to pull to the far left, demonic left?
+9 # RE: New York Governor Tells Trump Supporters "Leave the State" — JbRiddle 2022-08-26 13:24
See NYC and Albany are democrat strongholds but the rest on NY is red as can be. If shit hits the fan you simple have to stop shipments of food, water and power into NYC and watch the city tear itself apart.
+1 # Will get really stinky there quickly. — Steve in Buffalo 2022-08-26 14:56
View from my garden I can see the CSX mainline in the distance. I see about 3 garbage trains a day headed west, all from the NYC area. Some really stink at speed, google NYC sludge trains, cause problems anywhere that stop. The construction debris is one thing. Seen a big uptick in the new black gondolas cars with the one piece gray lids. They have shinny environmental labels with bold white printing. Corrosive, Radiation, are the two placards I see often. I wonder where the Radiation cars are going. TPTB supposedly have stopped excepting rad waste in Niagara Falls. Somebody finally realized having a "LOW LEVEL" nuke landfill on the land between Lake Erie and Lake Ontario was a bad idea. WTH, it is right down the road from Love Canal. There is a reason that Western New York has so many leading cancer hospitals.
+3 # Absolutely correct! — lmschofield44@hotmail.com 2022-08-26 14:19
Those of us who are upstate cannot stand this evil entity! And with God’s help she will be gone soon.
+12 # Does she ride to work on a broomstick? — almachius 2022-08-26 13:22
Her "values"! Baby-killing, degeneracy-loving, lawlessness on the streets values.
+5 # Don't forget... — J Grayman 2022-08-26 14:59
...she's also the Vaxx Queen, who's said from "pulpits" that the "vaxx is a gift from god"!