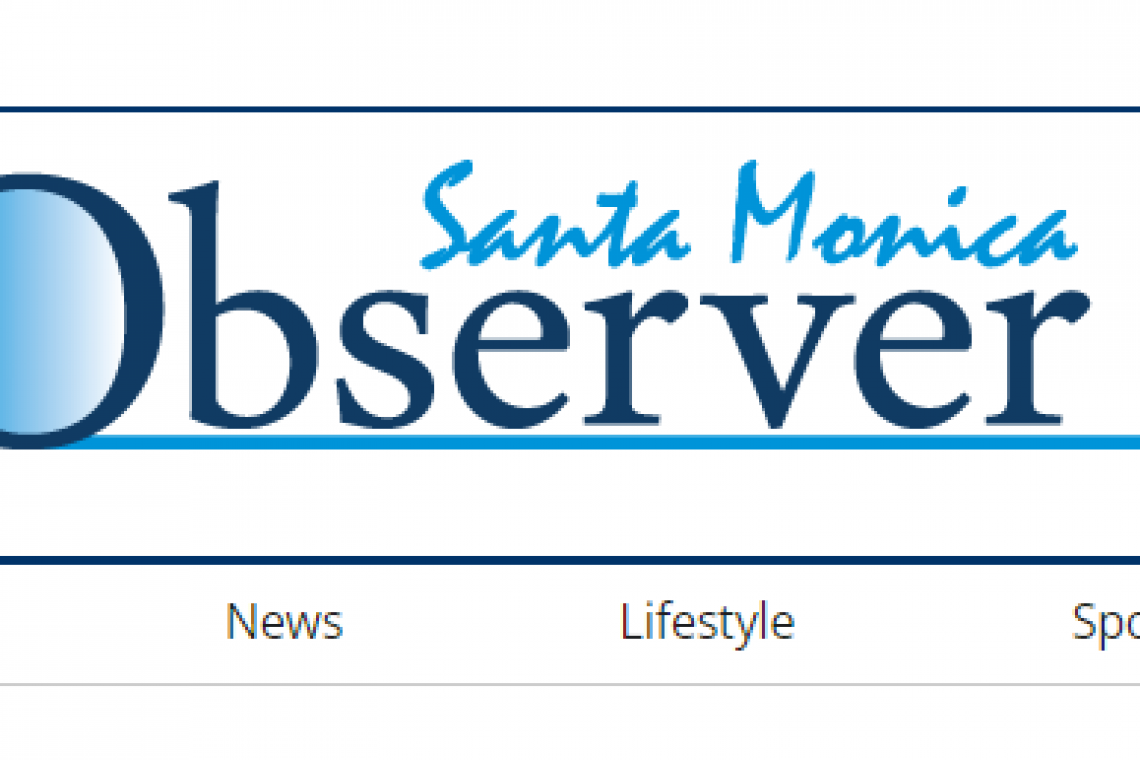 Reporter Stan Greene, a Staff Writer for the Santa Monica Observer, reports that the recent assault of Nancy Pelosi's Husband, at their San Francisco home, was likely an argument between Mr. Pelosi and a Gay Prostitute.

"The Awful Truth: Paul Pelosi Was Drunk Again, And In a Dispute With a Male Prostitute Early Friday Morning."

As SF's gay bars closed at 2 am, two gay men met in a bar and went home together. Happens every night in the City by the Bay. Except one of these two men, was married to House Speaker Nancy Pelosi.

I might disappear for telling you the truth. If I do, you'll all know why. But here's what really happened early Friday morning in San Francisco. IMHO

According to SFPD "RP [Reporting Person] stated that there’s a male in the home and that he’s going to wait for his wife. RP stated that he doesn’t know who the male is but he advised that his name is David, and that he is a friend,” the dispatch official said. “RP sounded somewhat confused.”

It's been a rumor for years in SF that Paul Pelosi is gay. David Depape the alleged assailant, is said to be a Castro (neighborhood in SF) Nudist. "The lunatic who allegedly assaulted Paul Pelosi is a Berkeley resident and a 'Former Castro Nudist Protester' and hemp 'jewelry maker' ...sounds totally MAGA Republican to me. 🤣🤣" this from Twitter.

Ok, so here's the theory, as related to me by a source: "Castro Nudists are a group of really radical gay male prostitutes that parade around naked with c--k rings.

"When he didn't answer the phone, the cops broke the sliding glass door to get in. Pelosi was struggling with the suspect, who was in his underwear.

Pelosi owned the hammer. Not Depape. Or, the male prostitute was doing something Pelosi didn't like."

The web site seems to be experiencing trouble right now, but here's a partial screen shot of the original story (Archive link HERE): 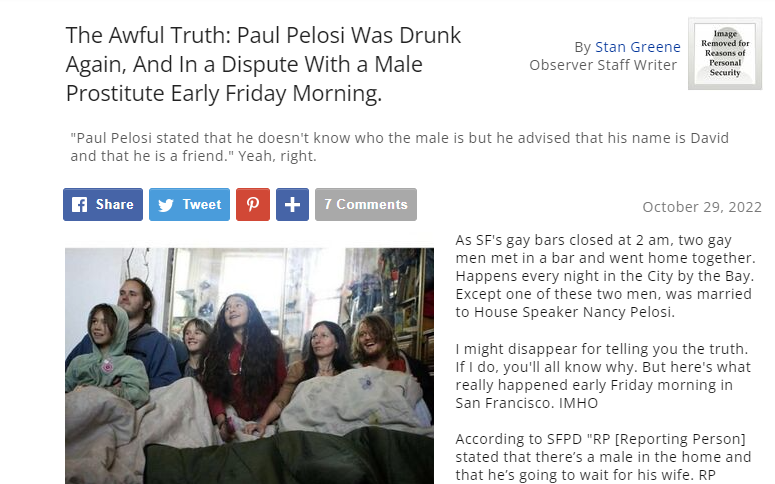 Greene goes on to write:

"And then there was the press conference when they didn't know the mic was on. During that, a reporter confirmed that the suspect was a gay Castro Nudist, but (authorities) told him he couldn't use it."

"Now tell me something. These people are worth hundreds of millions of dollars. Nancy is third in line to the Presidency. You don't think they have the most amazing security? And by the way, when Pelosi was in that drunk driving accident, he had a young man with him, and that too was covered up by the police and the press."

"How would (suspect Depape) have been able to break a window that without triggering an alarm? He didn't. The police broke the window to gain entry. There was only one hammer, and it belonged to Pelosi. And only ONE cop quoted the perpetrator saying, "Where's Nancy?" None of the other sources said that happened.

Greene then points out:

"And one of them could easily have broken that window. Remember, there was no alarm triggered. How would (suspect Depape) have gotten into that house without doing that? The cops smashed the glass to gain entry."

Who called 911 to initiate a wellness check? Either Nancy or her staff, who hadn't hear from Paul all evening and suddenly it's 2 am. Or a neighbor, hearing a fight at the Pelosi residence.

Admittedly, David Depape is a known nutcase. He's an election denier, says mainstream media, who has posted conspiracy theories online. That may be true, but he also lives in Berkeley, where he is a 42 year old career student.

Greene wraps-up his story with this little gem:

"My law firm served a lawsuit against Paul Pelosi one time in SF after attempting to serve at other residences-Napa, Georgetown. They weren't home, but staff were, and multiple law enforcement officers were on the perimeter. Break-in is odd given this level of security." said Harmeet Dillon, Republican National Committee Chairman"

Nancy Pelosi does NOT live in a Gated Community in San Francisco.

It is just a single family home at 2640 Broadway, near Scott St, in San Francisco.

The house is blurred out, but you can swirl around and see the neighborhood is NOT a gated community:

I have no doubts that this home would have a home security system installed, like Brinks. That would make sense. Of course, the system may have been turned off, when Paul got home from the Gay Bar.

So either he didn't have the system activated that night (forgot to turn it on), or it was on, and he turned it off when he got home from the bar.

Here are the pictures:

That 'glass' has security film on it. Most of it is hanging in it's frame.....pushed IN.

There is one large chunk missing......and it's NOT outside.

Because where he is heading is not good.

He needs to get his life in order and seek help in a major way. Because where he is heading is not good.Seek God in his life. You live by the sword you die by the sword..

Remember Seinfeld….”So he’s gay, not that there’s anything wrong with that “….ya da ya da

No, the pictures DO NOT show that.

Here are the pictures:

That 'glass' has security film on it. Most of it is hanging in it's frame.....pushed IN.

There is one large chunk missing......and it's NOT outside.

You do see some glass "dust" outside.....pulverized from repeatedly beating on it to knock in the security film.
+1 # Apparently there was a third person there — Nostros 2022-10-30 13:13
who opened the door for the police.

who opened the door for the police.

No there was NOT a third person there. The only Pelosi and the perp were there. One of them hit the latch to open the door.....the police don't know which one.

https://www.washingtonexaminer.com/news/police-clarify-unknown-person-mystery-pelosi-home-attack
"After San Francisco Police Chief Bill Scott offered details on the incident on Friday, Politico reported that when officers arrived at the house, they "knocked on the front door and were let inside by an unknown person." This excerpt, which was shared on social media, led to speculation that there may have been a third party.

MORE: The SFPD also says that there were only TWO people inside the Pelosi home (Paul Pelosi and DePape) when they responded, clarifying statements made at Friday’s press conference which seemed to indicate there was a third person inside the home who opened the door. (2/2)

— Tom Winter (@Tom_Winter) October 30, 2022"
+2 # hammer jammers — bogwon 2022-10-30 13:03
its turning into the old hammer jammin gone south story?? heck this is even beyond hollywood script writers imagination
+6 # Gay Pride — papa 2022-10-30 12:51
Are these people only full of "Pride" during marches, or Drag Queen Story Hour? Step up and shout from the rooftops that you are a homosexual and more and you want the world to know. Just think, our country will preserve this human specimen under Cheyenne Mountain while we deal with blast, heat, and radiation "topside".
+4 # Going after strange flesh? — acturner067 2022-10-30 12:34
Sodom and Gomorrah comes to mind along with those that worships in temples of prostitution/gay bars. The field/world in the beginning was sowed with goodly fruit but an evil one came in the night while we slept sowed toxic tares and they were allowed to grow up amongst the wheat. It is known the toxic tares will grow up faster to steal the light from the fruitful wheat. When the time comes for the harvest the wheat and tares will be separated. First the tares are gathered and destine for the fire then the wheat will be put into Gods barn.
+7 # Moloch is their god, bloody Moloch, The god smeared with the blood of children, Burnt offerings to him: Moloch! — White Lightning aka Raptor 2022-10-30 12:31
For all your sanctimony
Your only god is money
And on profit’s altar
You offer sons and daughters

From Hymns for Worship, research for Seventh Day Adventists