One Year Ago Today: Americans Tuck-Tail and Flee Afghanistan 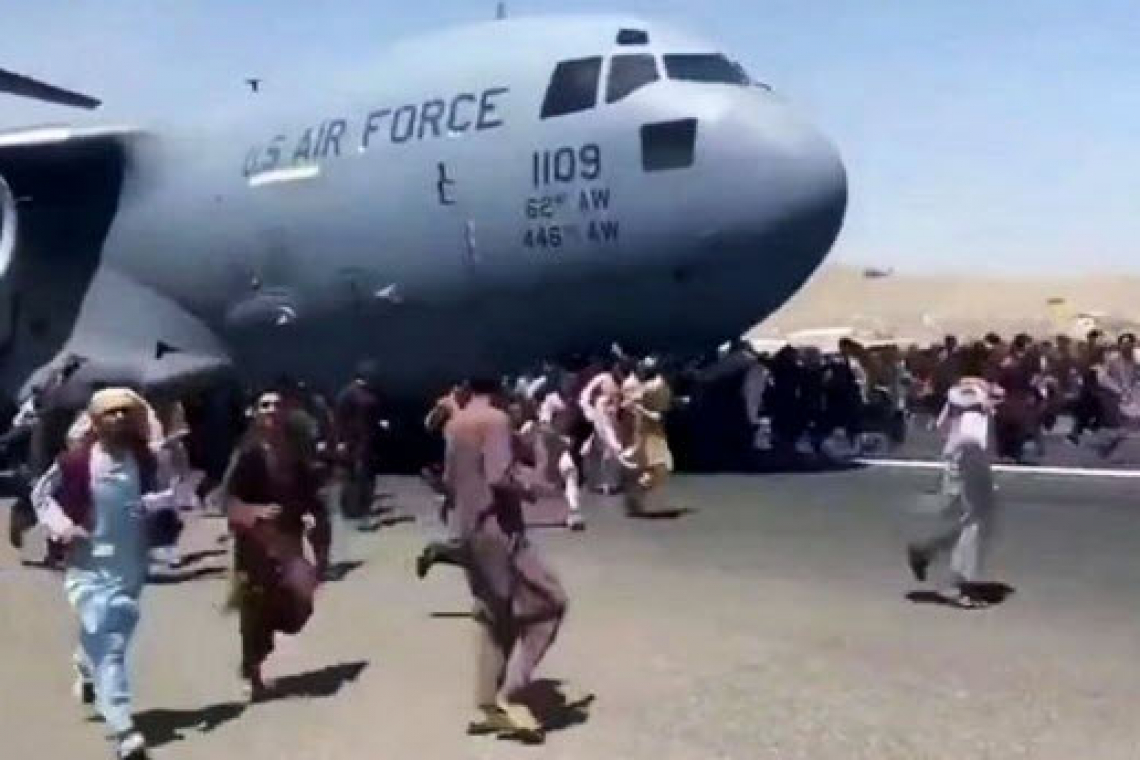 One year ago today, August 18, 2022, The United States suffered its worst military and national humiliation in history.  After spending upwards of 20 years doing battle in Afghanistan to rid that country of the Taliban, we fled the country and left it to . . . the Taliban.

CBS reporter Sara Cook posted this note that was sent out to American citizens trapped in Kabul.

The note was sent to Americans trying to escape Afghanistan after the Taliban took control of the city over the weekend. The Biden administration told Americans to make their way to the Kabul airport But they could not guarantee their security as they made their way there.

A congressional aide told CBS there were no partners left in Afghanistan to safely get the 10,000 to 15,000 Americans trapped around the country to the capital of Kabul.

You’re on your own.

From the Biden Administration: PLEASE BE ADVISED THAT THE UNITED STATES GOVERNMENT CANNOT GUARANTEE YOUR SECURITY AS YOU MAKE THIS TRIP They were on their own.

A congressional aide tells @CBSNews we have no partners left in Afghanistan to safely get Americans in-country to Kabul. “There are 10-15k AmCits who still need to get out, and that obviously doesn’t include the tens of thousands of SIVs or P2 applicants trying to get out of Afg” https://t.co/SKw1FvXBCV

The US Embassy in Kabul sent another security alert to Americans trapped in Afghanistan on Wednesday.

“THE UNITED STATES GOVERNMENT CANNOT ENSURE SAFE PASSAGE TO THE HAMID KARZAI INTERNATIONAL AIRPORT,” the US Embassy in Kabul told American citizens in a security alert on Wednesday.

“US government-provided flights are departing. US citizens, LPRs, and their spouses and unmarried children (under age 21) should consider travelling to Hamid Karzai International Airport. You should plan to enter the airport at Camp Sullivan. From the HKIA Airport South Traffic Circle, head east for 1km and turn right on to Camp Sullivan. Please note that gates may change frequently and that we will provide updates as necessary,” the security alert read.

The evacuation flights will be available on a “first come, first serve basis.”

Thousands of Americans were left stranded in Afghanistan. The Biden regime abandoned them and left the country.

This was the greatest American embarrassment in history.

President Gerald Ford acted decisively to rescue the crew. The Mayaguez was anchored at Koh Tang Island near the Cambodian coast, and military planners believed the crew was on the island. Air Force gunships sank three Cambodian patrol boats to prevent them taking the Mayaguez's crew from Koh Tang to the mainland. Soon after, Marines boarded the Mayaguez and found it abandoned.

Marines landed on Koh Tang in Air Force helicopters to rescue the crew, but incomplete intelligence made the operation a near disaster. Expecting only light opposition, the USAF helicopters instead faced heavy fire from a large force. The Cambodians shot down four helicopters, damaged five more and killed 14 Americans. More U.S. troops and aircraft urgently moved to reinforce the 131 Marines and five USAF aircrew trapped on Koh Tang.

As the assault unfolded, the Mayaguez crew appeared in a small boat, and were rescued unharmed. President Ford halted offensive action, and the operation shifted from assault to rescuing the trapped Marines.

Another 100 Marines moved into Koh Tang to reinforce and extract the trapped Marines. Coordinated USAF support by attack aircraft, forward air controllers, rescue helicopters and gunships pounded Cambodian targets while the Americans on the ground fought hard to maintain their positions.

Only three USAF helicopters were left to extract more than 200 troops. They tried time and again, braving fierce, accurate fire, but were repeatedly driven off. Finally, they reached the beach and recovered 129 Marines in multiple trips, landing them quickly on Navy ships and returning to the island for more. On the last trip to the beach, USAF pararescueman Tech. Sgt. Wayne Fisk left his helicopter to find two missing Marines still laying down covering fire. He led them to the helicopter, and the 14-hour rescue ended as the aircraft left under fire.

Three Marines, inadvertently left on the island in the darkness and confusion, were killed and buried there within a few days by the Khmer Rouge. Total U.S. casualties included 18 dead and 50 wounded. Twenty-three more USAF personnel died in a support force helicopter crash in Thailand due to mechanical failure.

Quick, effective action at Koh Tang by USAF, Marine and Navy forces prevented a bad situation from becoming much worse. In particular, the persistence, determination and heroism of USAF helicopter crews saved many lives. The action at Koh Tang between May 12-15, 1975, was the last combat in Southeast Asia for U.S. forces.

Look at what God did to king David, when David was just planning an unjust war!! He did not even begin the war and God smote (killed) 70.000 of his men.

I don't like this anymore than you do, but in many ways these men are getting their just rewards for going along with the evil. Actions have consequences and we saw the consequences of having a standing army in Afghanistan a year ago.

Bot or idiot...
you decide.

NOTE ...and the worst has not yet arrived.

Russia is ready to blow up the world rather than giving up its sovereignity in favour of globalist satanist stars and stripes zionism. Unfortunately for this last, Russia has the means to do it.

For Russians is much more better to die than loosing the christian roots and spiritual traditions. For the godless/satanist westerners this behaviour is totally inconceivable and incomprehensible. For this reason thery are going towards their suicide.
+1 # A fitting end — almachius 2022-08-18 11:08
For a sneaky government that used Afghanistan to fight the USSR, just lie they're using the Ukranians to fight Russia today.

Just like they used al Qaida and the Muslim Brotherhood to fight the Libyan army and destroy Libya. And just as they built up numerous Islamist gangs of headchoppers to tyrannized and destroy Syria

ALL of them are COMPLICIT.

Do you know what God did to king David when he just PLANNED an unjust war? If not you need to read the word and learn.
+2 # Oh well — thulsadoom17 2022-08-18 10:09
We never should've been there in the first place. Yes, we should've recovered all of our equipment before leaving, but oh well. Again, we never should've gone in there in the first place.
# RE: Oh well — BeenThere 2022-08-18 11:25
Do some research on the "council of foreign relations" prior to 9/11. You will get your answer as to why everything occurred.....
# It's been a year....very few IF ANY updates.... — LilBirdie 2022-08-18 09:57
On this day is anyone speculating about the fate of those left behind?
What number of untold situations did we create?
Have any of those left behind survived the year?
+5 # RE: It's been a year....very few IF ANY updates.... — Gunner 2022-08-18 10:17
I imagine many have been SLAUGHTERED like flipping' dogs.
+1 # Elections Have Consequences — SparkyTaz 2022-08-18 09:56
Elections have consequences. stolen elections have catastrophic consequences. The occupation of Afghanistan and Iraq are the direct result of the global elites using our young men and women as fodder for their warmongering machine. Bush 1, Clinton, Bush 2, Obama, O'Biden....they are all the same. The result? Over a million innocent lives sacrificed at altar of the global elite's god - shameful. 911 was an inside job.
# RE: Elections Have Consequences — Gunner 2022-08-18 10:20
Anyone that is honest knows that god damned election was blatantly STOLEN and typical American form we the people did absolutely NOTHING about it. Seriously WTF is wrong with us guys? Do we want to be JUDEN Part II? Because that is what is going to happen to our sad, impotent asses!!!! We are worse, they had no weapons. . .
+3 # RE: Elections Have Consequences — BeenThere 2022-08-18 11:27
I understand why so many don't get it. Stop looking for answers in the carnal. If you look to answers in the spiritual, you will begin to see and understand. It's all unfolding EXACTLY as it was written....
+11 # Fake story — Dave 2022-08-18 09:49
Again you run this faked false story. I wrote you an email then describing how this entire story and video was fabricated when it happened and got not response. As a pilot in the Army who served three tours I can assure this is fake. There is no tractor or ground vehicle pushing or pulling that airplane. So it must be moving under its own power. If it was moving by it’s own power the people gathered behind the jets would be blown away 20 to 30 feet. It’s jet wash and can’t be faked. Additionally just look at the lack of reflection on the windows they are painted on. Did you even notice that the tail numbers under windows are 9/11 but reversed? This is a self powered balloon just like the balloon tanks from WW2. Do some homework stop recycling old stories and get back to the news.
+1 # RE: Fake story — standingwave 2022-08-18 21:20
Good catch
+4 # RE: Fake story — John Galt 2022-08-18 10:33
Quoting Dave:

Again you run this faked false story. I wrote you an email then describing how this entire story and video was fabricated when it happened and got not response. As a pilot in the Army who served three tours I can assure this is fake. There is no tractor or ground vehicle pushing or pulling that airplane. So it must be moving under its own power. If it was moving by it’s own power the people gathered behind the jets would be blown away 20 to 30 feet. It’s jet wash and can’t be faked. Additionally just look at the lack of reflection on the windows they are painted on. Did you even notice that the tail numbers under windows are 9/11 but reversed? This is a self powered balloon just like the balloon tanks from WW2. Do some homework stop recycling old stories and get back to the news.

Yup; you look at a picture of the real thing and it’s obvious this is a fake.
+1 # RE: Fake story — standingwave 2022-08-19 11:23
The aircraft does appear to be a balloon decoy, but the circumstances still appears to be of an airport taken over by a mob. It just happens the balloon decoy was probably part of the military assets left behind; therefore, the Afgans did not capture an actual aircraft. The mob seems to be taking it for a joy ride. (There does appear to be a tractor towing the thing. It is in the shadows loaded with people.)
+2 # In other words, — standingwave 2022-08-19 11:31
The aircraft is fake, not the photograph (or the story).
+5 # fake picture but the point is the event — Booskybobcat 2022-08-18 10:22
which wasn't fake and was a complete and total F job.
Refresh comments list
RSS feed for comments to this post
JComments
by sur.ly
100% Trusted Informational Platform Website 2021