Over 5 ***feet*** of snow now confirmed in western New York 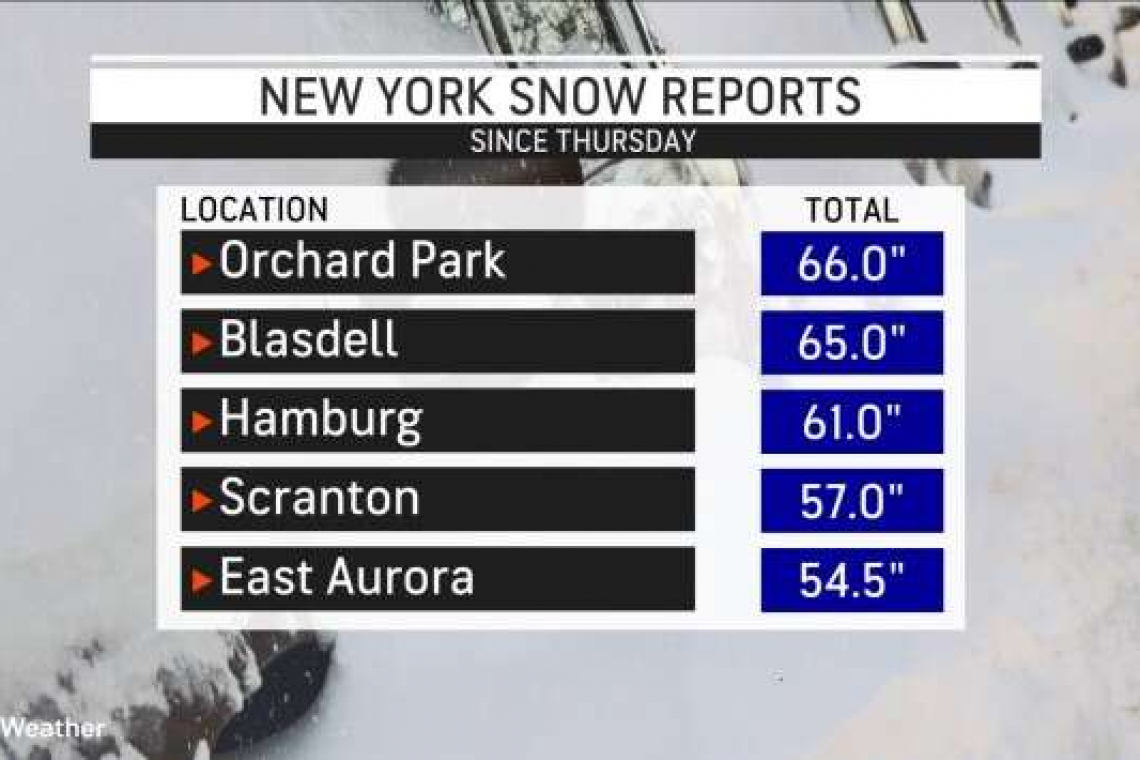 Over 5 feet of snow now confirmed to have fallen in western New York state, near Buffalo, in the past 24 hours!

Snowfall reports over 5 feet have trickled in from the hardest-hit areas of New York state as of early Saturday morning. The highest total so far is a whopping 66 inches of snow from Orchard Park, which is southeast of Buffalo, as of early Friday evening.

Just to the northwest, Blasdell has reported 65 inches of snow so far. To the south of Blasdell, a building collapse and numerous car rescues have occurred in Hamburg, where 61 inches of snow have fallen with the ongoing storm.

Additional significant snowfall is still possible through Sunday, with Winter Storm Watches set to expire as late as Sunday night.

Here at 9100' in Colorado we woke up to -7F this morningwith negative double-digit forecasted for tone... and it isn't even Thanksgiving yet?!
# Correct you are — Jessiebeaner 2022-11-19 16:12
This is the start of a grand solar minimum, and it should be a doozie.
This was predicted, based upon known repetitive cycles of climate variation.
So, 5 years ago when I had entire new roofs put on a garage and a shop I had the new trusses placed 16 inches off center vs the overly lax 20”. The builders argued and argued with me that this was over build and way beyond code requirements. They were determined to control my projects.
I kindly reminded them that I WAS PAYING FOR THE DAMN ROOFS AND THAT IF I WANTED TO OVERBUILD I WOULD CERTAINLY DO SO. I ALSO REMINDED THEM THAT I CAME FROM A FAMILY OF BUILDERS, MASONS AND CARPENTERS, AND THAT I DAMN WELL KNEW WHAT WAS NEEDED IN THE NORTH FOR PERIODS OF GRAND SOLAR MINIMUM.
I got that deer in the headlights look, so I explained climate cycles and the upcoming Grand Solar minimum.
When I asked if they were offering to replace a snow caved roof, on their nickel, when their 20” off center code roof collapsed…….CRICKETS.
I asked if they has seen collapsed roofs built according to code…..yes, indeed.
When I asked if they had ever seen a roof built like I wanted collapsed……crickets.
When they then argued “unnecessary extra cost” I calculated the cost of the extra trusses, and asked them to name me an insurance company that would insure my roof, for the price of the extra trusses, for the life of the building……crickets again.
I imagine many roofs will collapse during this grand solar minimum……but not mine. Not my house either…..family home built by my builder family, and built correctly.
Steep 9/12 pitches on the roofs also and every connecting point hurricane strapped with many dozens of cross member 2 x4 and 1x6 supports connecting the entire truss structure.
# RE: Over 5 ***feet*** of snow now confirmed in western New York — clove 2022-11-19 11:06
Lots of snow in Lancaster too. My nephew is a hospital employee. He got to work before dawn yesterday. And has been there ever since. Had to sleep at his desk. He over sees the feeding of patients. So he will be desk sleeping for at least the weekend. While the wife finds someone to get the snow off their roof.
+3 # Yahoo — Bill51 2022-11-19 10:48
It's beginning to look a lot like Christmas!!
+5 # Going to be a Brutal winter…. — Jonesy042 2022-11-19 10:12
I’ve lived in upstate/central NY all my life. I’ve heard it said we live in the snowiest part of the United States this side of the Mississippi. Back in 2007 we received so much snow it was worldwide news. 10 feet in 10 days is what I remember. I cleared my roof off, twice in one week, only the roof of house was visible!

They get buried at least once every few years.

Glad all of the diesel shortage stuff was bullshit or they would be in for trouble.

It's a little premature to declare that 'over', much less 'bullshit'...


https://www.msn.com/en-us/finance/markets/the-diesel-fuel-crunch-may-be-the-next-focal-point-of-europes-energy-crisis-as-competition-stiffens-iea-says/ar-AA148OS5
The diesel-fuel crunch may be the next focal point of Europe's energy crisis as competition stiffens, IEA says
Business Insider on MSN.com|4 days ago
Rising prices for diesel fuel will add to inflation and worsen Europe's energy crisis, the IEA says. Competition will also heat up once the EU bans Russian refined fuel product like diesel in February. Diesel prices are 70% higher compared to a year ago, the IEA added."

The real danger here is that the govt will continue to intervene in the diesel/heating oil market. They already raided the heating oil reserve for trucking.

The next step would be ...... price controls. Without price controls, demand will naturally fall as prices increase.....people will use less and/or be priced out of being able to buy diesel.

With price controls? Nobody will be getting anything. The price of paper diesel will be set at some 'palletable' number.....maybe $4/gal. But NOBODY is going to be making, transporting, and selling diesel at a loss.