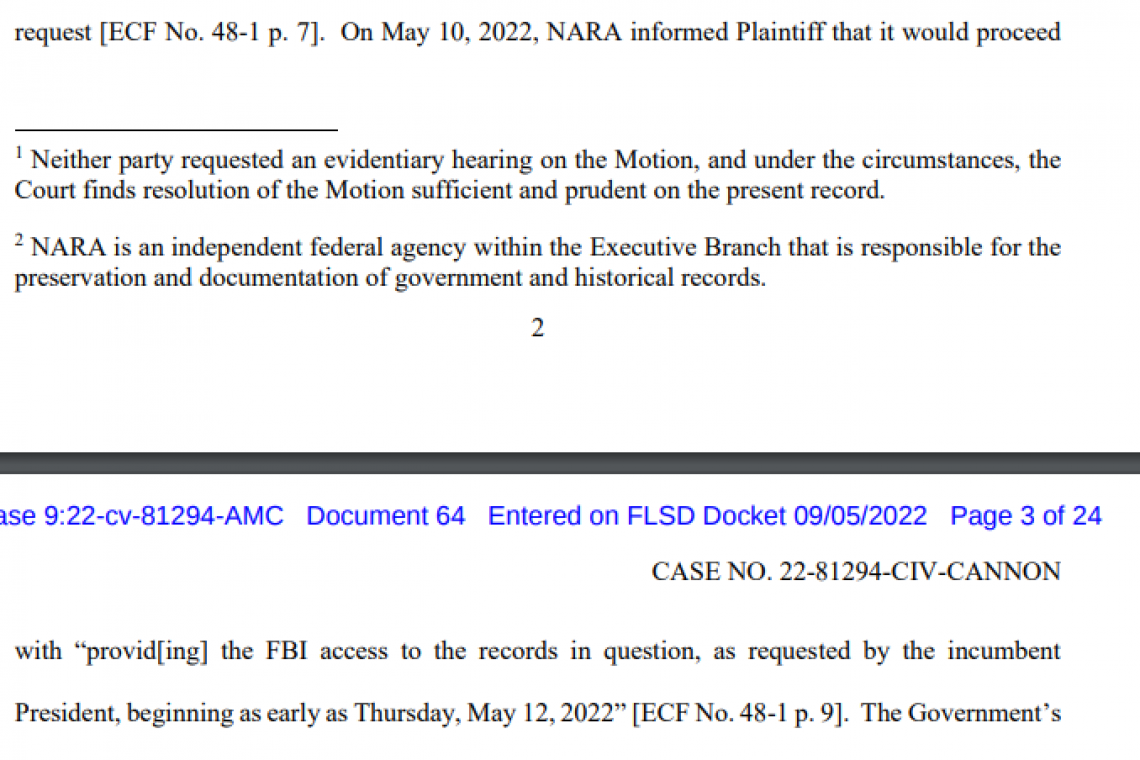 On August 8, the FBI executed a Search Warrant against the estate of former President Donald Trump, raiding his mansion called Mar-a-Lago, in Palm Beach, Florida.  The next day, illegitimate President  Joe Biden DENIED having anything to do with it, or having any knowledge of it.   Proof is now out, in a government court filing, that PROVES Biden arranged the whole debacle!

A filing in the United States District Court, for the Southern District of Florida (SDFL) the government, in its own paperwork, admits:

On May 10, 2022, NARA informed Plaintiff that it would proceed providing the FBI access to the records in question, as requested by the incumbent President . . . "

Here are the images from that government filing: 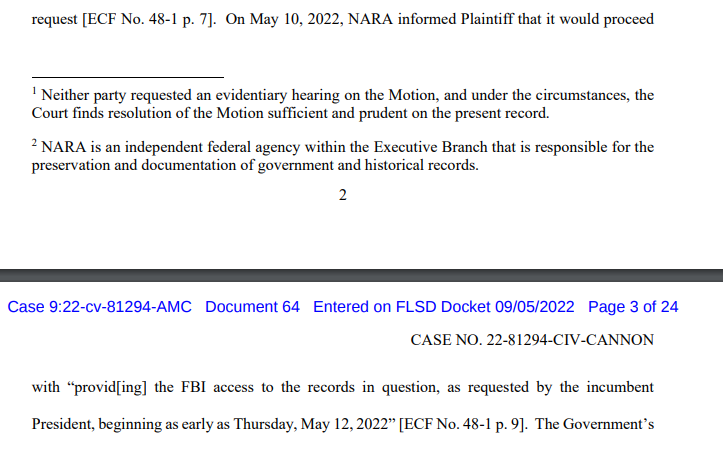 This seems to show that not only did Biden know there was going to be a raid, HE REQUESTED THE DOCUMENTS!

In short, it seems that Biden not only lied about whether or not he had any knowledge, all of his spokespeople and defenders lied too.

It seems, on its face, that not only did Biden gain the Office of President illegitimately, through rampant and brazen election fraud, he and his minions are now routinely LYING to the American people -- even about a historic FBI raid against a former President.

It seems to many people that the Biden regime is completely illegitimate, with nothing they say being believable.

# RE: PROOF: BIDEN REQUESTED TRUMP FBI ACTION — Faith11 2022-09-06 17:28
This party is truly irrelevant
# RE: PROOF: BIDEN REQUESTED TRUMP FBI ACTION — clove 2022-09-06 17:05
As others have said here. The Biden is not the original. Joe Biden had a pink hue to his skin, not yellow. His nose was bigger and the bottom. Most just talk about his ears not being the same. But it as plain as the nose on this imposters face. We have been seeing the imposter at events more and more. People got used to his face. Now we don't see Joe, ever. Is he on ice? Waiting for a better time to say he is no longer? Look at the portrait taken of him in 2020. The original is still out there at this point.
+1 # ShadesofGreen — jake 2022-09-06 11:53
Biden is a MADMAN and wants to start a war with the patriot conservatives.

He requested the Trump documents to make sure his son Brandon is covered if they find incriminating evidence against him.

And everyone thought Biden was a conservative Democrat when he came in power.

Now he is 100 times worst than the radical leftist whom want total government control over all private institutions in the US.

Biden is a very dangerous individual whom seeks to destroy anyone who gets in his way or agenda as proof from his radical fascist speech which he states all conservatives are enemies of the state!

No surprise at all. This entire govt is corrupt, disgusting and ultra CRIMINAL.

Yes it is! It's one giant Fuster Cluck! 50 years ago as a young Marine, a Navy chaplain pointed out a Bible verse that comes to mind today:

Psa. 144:1  "Blessed be the LORD my strength, which teacheth my hands to war, and my fingers to fight"

Looks like we're being forced into a fight in this once free country. Either that or we become slaves, or worse.
+4 # agaist the law — rugerwild 2022-09-06 04:39
they are trying to make it a crime by saying the election was stolen holy cow
+2 # # — rogue_ 2022-09-06 08:25
They keep saying maga republicains embrace violence. They are setting the narrative for false flag attacks and blame maga supporters.
+5 # Biolabs — Jules 2022-09-06 00:35
Did Hal discuss the findings in the biolabs and I just missed it? I am very interested in that because to me, it explains more why they keep throwing money at a dying horse. And why the media is working overtime **cover up**
Reminder - when ANTIFA was roaming free they had medics that were actual witches that were in Wiccan covens. They cast spells and carried their own books of spells and shadows. Uber creepy - so that whole side likely has a legion of demons just switching off who gets to play on the pitcher's mound.
+1 # Good questions Jules — Doug Brown 2022-09-06 01:23
Good line of questions.
Cover-up being the operative word.
+8 # #Biden — armouredone 2022-09-05 23:54
The truth is he didn't order it. It's double speak. They were simply actions taken by his handlers without his knowing. Are we here to believe that he actually has the cognizance to put something in motion? Trump has said in many interviews that he thinks they were coming for Hilary's emails. It seems as I smell a witch behind this ordeal.
+11 # Biden — Doug Brown 2022-09-05 23:13
Biden is reflecting a certain type of evil,
something sinister and inhuman, something
not easily described.
Something is clearly going on.
Many knowledgeable people say there
cannot be elections, that the Dems have
too much is at stake.
Fact. The evil Biden is exhibiting cannot be
easily removed. These types cannot be
peacefully removed.
I agree with what many ate saying...look for
an event that prevents an election.
A monster like Biden and his rotten ilk will not
walk softly away.
+12 # RE: PROOF: BIDEN REQUESTED TRUMP FBI ACTION — RockyMountainBeerMan 2022-09-05 23:10
.
What, Brandon lied???

Oh, that's right, his lips were moving.
.
+9 # Situational Pathology — OccamsRazor 2022-09-05 22:57
So the Petrodollar is fading fast. The Government needs some way to keep itself afloat. Just like Turdeau who seized any 'sympathizer' bank accounts to the Freedom Convoy, I wonder if the banks here in the states will allow the same thing to happen. If the Democrats can demonize half of America, and seize their assets ... then that might be a storm that's coming. Those who own farmland and businesses are largely Republican (producer) families. The Democrats are drooling on how to get that out of Private hands and sell it off to Foreign investors willing to pay top dollar for those farms, ranches, businesses. Then they could keep things afloat for a little longer.
+5 # RE: PROOF: BIDEN REQUESTED TRUMP FBI ACTION — Beetlepumpr 2022-09-05 22:48
whatever is said just flip it. same M-O since Trump was in. Everyone one of them are demonically ran.
+3 # Honestly — RealAmericanPride 2022-09-05 23:18
I think china has dirt on all high(er) level politicians and all those politicians don’t want that dirt spilled to the American public, I think china has hacked all of their computers and both sides have hunteresque type of dirt
+2 # Honestly — gerg111@live.com 2022-09-05 23:54
I know they have dirt on all politicians. that is how the game is played!!!!!
+2 # So they play — RealAmericanPride 2022-09-05 23:23
Into china’s hand to keep their secrets under wraps, which means selling America out at the cost of our republic.
+9 # RE: PROOF: BIDEN REQUESTED TRUMP FBI ACTION — Dagwood 2022-09-05 22:41
So all the proof is in plain site to see. What in the world is preventing an overthrow of this person who sites in the WH? When I see stuff like this, I move further into buckling down. Political action is bunk at this point.
+11 # RE: PROOF: BIDEN REQUESTED TRUMP FBI ACTION — RealAmericanPride 2022-09-05 22:35
Dems lying? What’s new? The consequences will be nothing as they seem to be well, well above the law. The only way they get away with this is because of spineless republicans.
+14 # Evil came...and stayed. — Doug Brown 2022-09-05 23:17
Evil came to visit...
And because nobody objected,
Evil decided to stay.
-1 # RE: Evil came...and stayed. — Gunner 2022-09-06 07:18
Is it me or what but all of this horrible, criminal bullshit is going on and all of us are virtually doing NOTHING?? Am I missing something?? Folks doing Nothing is going to get us on the Cattle Cars just like the JUDEN.
# Fat fingered ! — Gregg W 2022-09-06 16:38
Damn it. Hit down instead of UP.
You are right. We just don’t have any leaders showing up yet.
+1 # RE: Evil came...and stayed. — John Galt 2022-09-06 15:18
Quoting Gunner:

Is it me or what but all of this horrible, criminal bullshit is going on and all of us are virtually doing NOTHING?? Am I missing something?? Folks doing Nothing is going to get us on the Cattle Cars just like the JUDEN.

God’s hand is on this country restraining anyone from taking that kind of action.
And that’s because we are, as a nation undergoing His divine judgement.
When the Restrainer(Holy Spirit) is removed, then this country will explode.
Unfortunately, it won’t be flesh and blood running rampant. It will completely demonic.
Read Revelation.
Refresh comments list
RSS feed for comments to this post
JComments
by sur.ly
100% Trusted Informational Platform Website 2021