San Francisco Declares state of emergency over "mo Pox" - or is it "Pride Pox?" 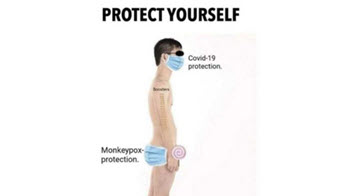 The mayor of San Francisco announced a legal state of emergency Thursday over the growing number of monkeypox cases, allowing officials to mobilize personnel and resources and cut through red tape to get ahead of a public health crisis reminiscent of the AIDS epidemic that devastated the city.

The declaration, which takes effect Monday, was welcomed by gay advocates who have grown increasingly frustrated by what they called San Francisco’s lackluster response to a virus that so far has affected primarily men who have sex with men, although anyone can get infected.

The city has 261 cases, out of about 800 in California and 4,600 nationwide, according to the San Francisco Department of Public Health. A national shortage of vaccine has resulted in people waiting in line for hours for scarce doses, often to be turned away when the shots run out.

“San Francisco is an epicenter for the country. Thirty percent of all cases in California are in San Francisco,” said San Francisco Public Health Officer Dr. Susan Philip.

San Francisco shut down its primary monkeypox vaccination clinic earlier this week after it ran out of doses, saying it had only received 7,800 doses of a requested 35,000.

“San Francisco was at the forefront of the public health responses to HIV and COVID-19, and we will be at the forefront when it comes to monkeypox,” said state Sen. Scott Wiener, a Democrat who represents San Francisco. “We can’t and won’t leave the LGTBQ community out to dry.”

(Hal Turner Remark: "Sodom-By-the-Sea,"  errrrr, San Francisco,  has public officials named Weiner and Breed.  This is surreal to me.

I'm so over the medical community in general but medical/pharmaceutical run medical conglomerates in particular I could just puke.

After watching my mom suffer for 20 years at the hands of the medical establishment because she had great insurance. I can pin point the exact moment all of her troubles started. It was back in the 90s when she was working in LA and got flu shots.

The she came down with epstein barr which morphed into psoriasis/ lupus - she died of all the medical interventions she endured over the proceeding years.

Secretary Xavier Becerra is expected to hold
press conferences this week to warn the public
about the threat of monkeypox.

(Look at the photo of Biden in this link)

CDC are reporting monkey pox has spread to children with 2 now infected . Rumours this could be due to two possibilities one being pedophilia the other being married men leading double lives, both are plausible. The WHO (Tedros) has ,apparently, ordered a media crackdown to prevent misleading information , seems like something to hide hmm. It appears that gay men cannot get enough with multiple news stories referencing their tendency to share their love anywhere and everywhere every other day. I think ,in keeping with lockdown tradition they need to be separated from themselves and the rest of us.

this is what we are talking about...lol