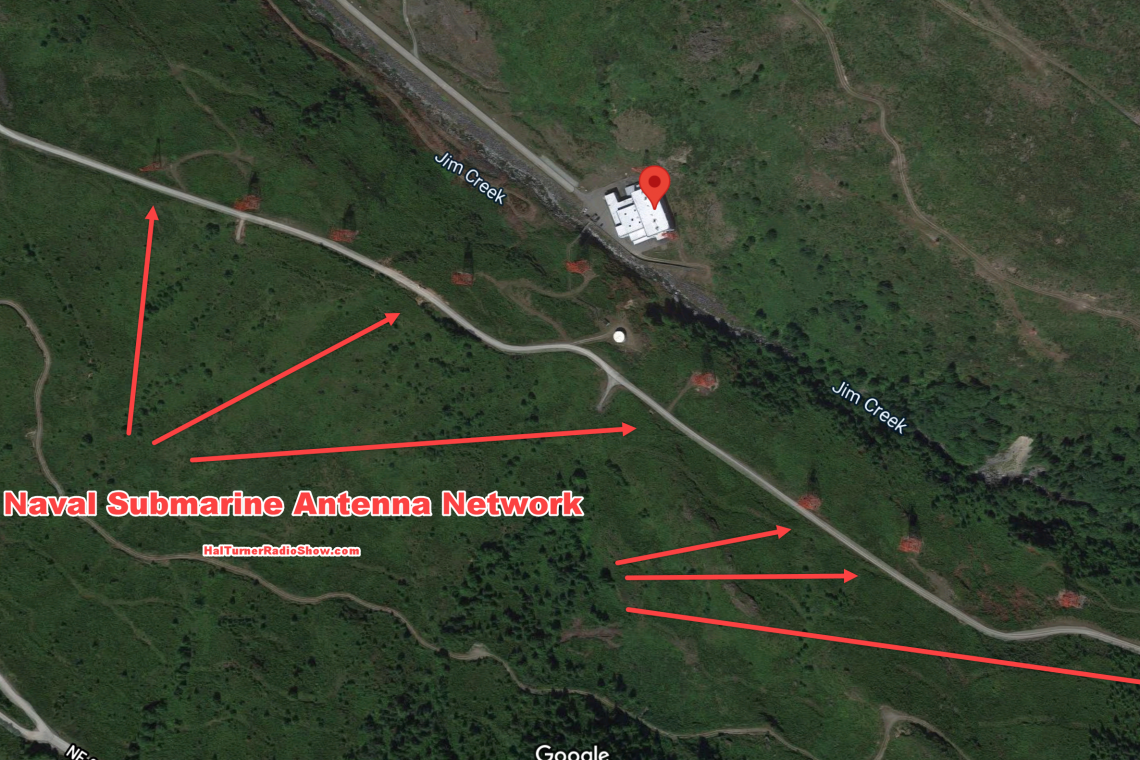 Very unusual military activity is taking place around the Jim Creek Naval Radio Station in Washington state; it's as if the US military is looking for a potential attacker off the coast.  This Radio facility is the way the US Military communicates with ALL our submarines, even submerged, worldwide.

They've also been running routes up and down the Chehalis River to the Northport bay between Westport and Ocean Shores.

They are DEFINITELY looking for and suspect something.

When Naval Radio Station Jim Creek was dedicated in 1953, it was recognized as the most powerful radio station in the world. Its advanced technology and broadcast strength were displayed in magazine publications such as Popular Science and Popular Mechanics. Today it is still among only a handful of radio stations capable of providing more than one million watts of power, allowing the U.S. Navy to communicate with ships, submarines and aircraft anywhere around the world.

Jim Creek valley was chosen as a strategic location by the Chief of Naval Operations, a site from which to transmit messages instantaneously to all naval operating units located throughout the world. The Jim Creek Navy installation, secluded in the Cascade Mountains of Washington, is located 55 miles northeast of Seattle. Nearly 5,000 acres encompass the radio station, along with 275 acres of old growth forest and recreational camp grounds open to Department of Defense military and civilian personnel, eligible dependents, and sponsored guests.

Access to the radio station is mostly restricted to 21 specially trained federal civilian personnel who keep it operating 24 hours a day, every day of the year.

"Training is the backbone of maintaining this critical communication site. It ranges from tower rescue, electrical safety, and wildlife and natural resource preservation just to mention a few," he said.

Technicians who have prerequisite radio backgrounds receive additional training on the Jim Creek radio and antenna array. Antenna maintenance personnel often work at very high elevations on the towers and cables, depending on weather conditions.

"Our radio maintenance people have to know the older technology down to the component level," said Gordon. "That's why we offer in-house, on-the-job training on site."

Besides radio and tower maintenance, onsite training qualifications include safe climbing techniques and tree line maintenance near the transmitter site which must be kept clear of any potential interference with radio transmissions.

The radio's extensive antenna network spans 980 acres of the Jim Creek valley between Wheeler Mountain and Blue Mountain of the Cascade Mountain Range. The network is supported by 200-foot towers positioned approximately 3,000 feet high on opposite mountain crests. Six towers on each crest are connected by 10 antenna cables that zigzag across the valley. More than 360 miles of copper cable conductors make up the antenna system ground grid, covering 545 cleared acres. 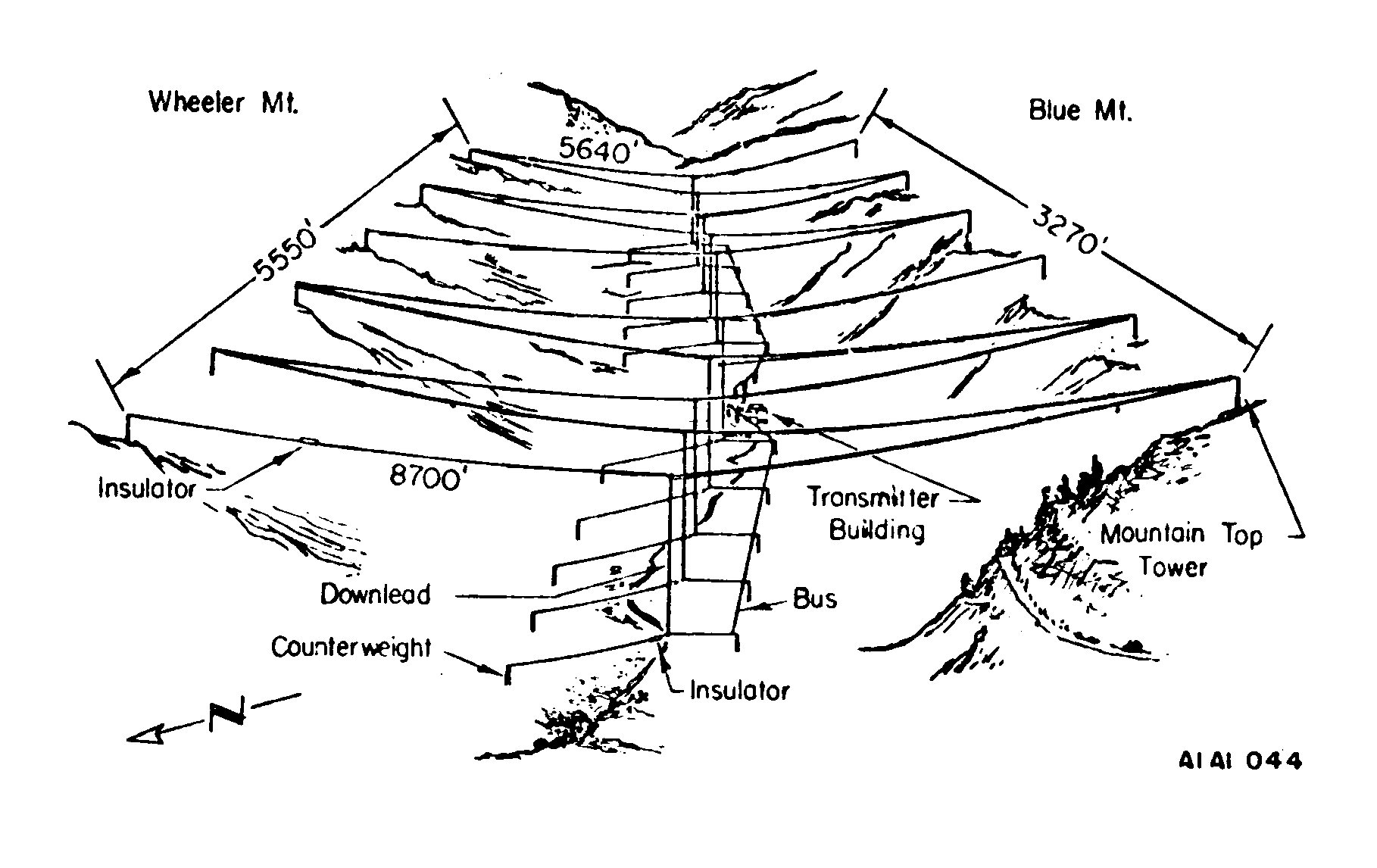 The radio transmitter and equipment are contained within a solid, windowless concrete building with a foundation that extends 35 feet below ground. The building is stabilized against earthquakes and copper sheath-lined throughout to shield it against electro-magnetic field disturbances.

One of the advantages to the location at Jim Creek is its proximity to a main power supply of great capacity, provided through a transmission line from Bonneville Dam.

Initial output of the radio transmitter was 1.2 million watts, which is far greater than most commercial radio stations that typically generate 100,000 watts of power. However, in order to conserve energy, the Navy does not use its maximum wattage unless absolutely necessary.

Within the radio station, a small visitor room marks its historic construction. Throughout the project engineers cleared 2,000 acres of land and built 12 miles of roads. The transmission equipment was manufactured at the RCA Victor plant in Camden, N. J., transported to Seattle aboard 27 freight cars, and then hauled by truck into the valley.

The completed project cost $14 million and went into operation on November 18, 1953.

The first radio message was tapped out in wireless code by Brig. General David Sarnoff, Chairman of the Board of RCA, as dictated by Admiral Robert B. Carney, Chief of Naval Operations.

The first reply came from the battleship USS Wisconsin, operating near Japan. Then responses came across the Western Pacific from aircraft carrier USS Yorktown, destroyer USS Floyd B. Parks, and submarine USS Bluegill. Following messages were sent from USS Sablefish in the North Atlantic and cruiser USS Pittsburgh in the South Atlantic. Aircraft carrier USS Tarawa responded from the Mediterranean and destroyer USS Charles S. Sperry from Caribbean waters.

Throughout its history, the 1950s-era radio station has remained a critical part of the Navy's modern mission. U.S. Navy ships across international waters continue to keep sea-lanes and trade routes flowing, provide assistance to allies, and protect national defense. Naval Radio Station Jim Creek remains in service to keep Navy sailors and units deployed around the world and around the clock, ready at all times.

An attack against this facility would cripple US military communications with our Submarine fleet.