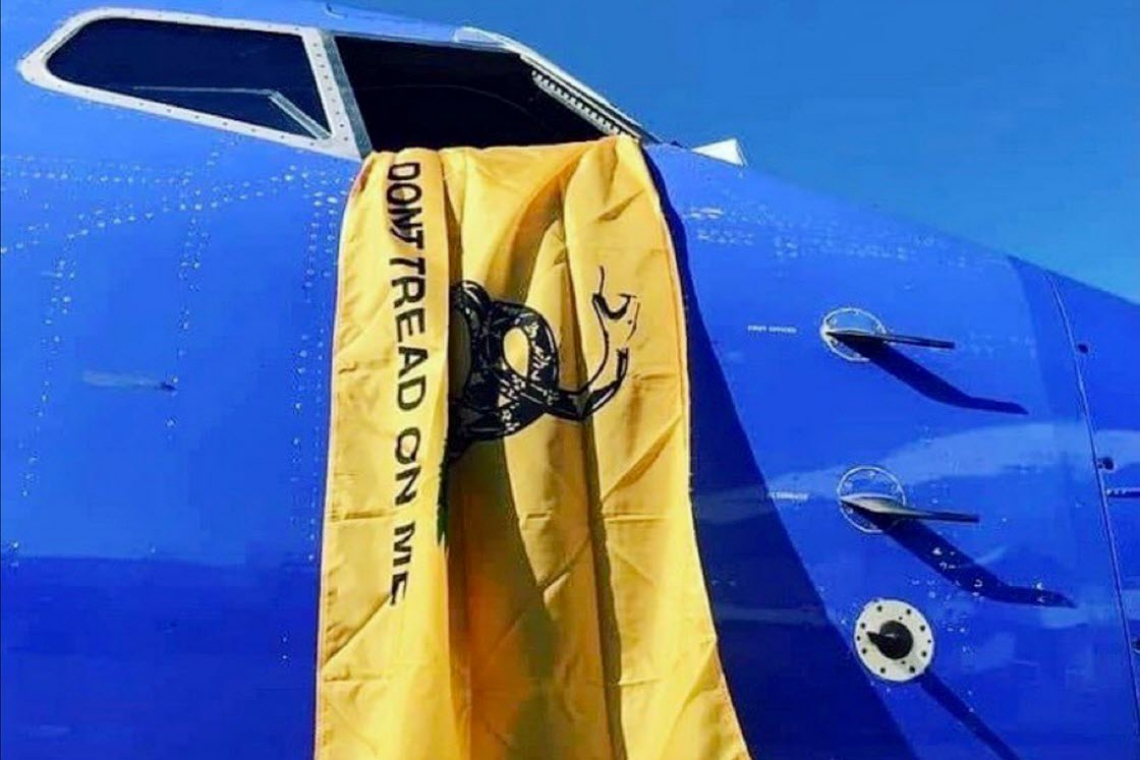 Pilots and other staff of Southwest Airlines have almost crippled the entire airline with their refusal to be forced into taking the experimental gene-therapy masquerading as the COVID-19 Vaccine.  Thousands of flights have been canceled because Pilots asserted their rights and walked out.

Above, a Gadsden Flag "Don't Tread on Me" is seen hanging from the opened window of a Southwest Airlines jet.   The meaning is clear: We are free people who make our own choices; you won't FORCE a death-dart / Clot-Shot on us!

Over the weekend, reports came in that Air Traffic Controllers in Jacksonville, FL and Milwaukee, WI had walked off their jobs to protest the mandated clot shot.

The flight cancellations had to be explained and Southwest decided to blame . . . the weather.

People almost immediately observed that the weather had been mostly fine, and that OTHER airlines had been flying.  Many of them joked "Strange weather that only affects Southwest airlines!"

Then it was rumored that there were Air Traffic Control situations, which the Federal Aviation Administration quickly, and publicly, denied.

For passengers, the results were real: no flights.  Big hassles.

For the mass-media: ZERO coverage.   Almost not a peep . . . . because the legacy mass-media knows this is directly about the vaccine mandates and they do not want to report anything to the general public which goes against THEIR narrative of "safe and effective" for the vaccines.

It also has to do with liability.  Many people who travel, pay for their tickets with credit cards.  Many of those cards offer "Trip Interruption" protection so that if an airline messes-up, the credit card company charges-back the air fare.  If this situation with Southwest IS the airline's fault, the credit card chargebacks will be enormous and Southwest doesn't want to lose the money.  So they won't admit what's going on.

Yesterday, Governor Gregg Abbott of Texas issued an Executive Order forbidding "any entity" in Texas, from adopting vaccine mandates.   Southwest Airlines is based in Texas.  So now, the Governor's Order puts a whole new dynamic into play.

The nation is closely watching this situation because employees of various companies all over the country are also being forced into taking these deadly clot-shots masquerading as vaccines, or face losing THEIR jobs.  If Southwest pilots and others hold firm, the airline will have to relent because they have no one to fly their planes.

Similarly, in many cities around the nation, school bus drivers walked out of their jobs rather than be forced into taking the death dart.  In New York, the Governor had to call out the National Guard to drive some city school buses.   You may be able to do that for a bus, but you can't do it for an airplane.

This is the level of two-faced sleaziness that exists in Corporate America today.

Many hope the Southwest Pilots hold firm.  Rumors say other airline pilots will be joining the fray this week.  The nation could see a complete collapse of the air travel industry . . .  and the industry will have brought it upon themselves by trying to force clot shots on free people.  Their response right now seems to be: "Don't Tread on Me."