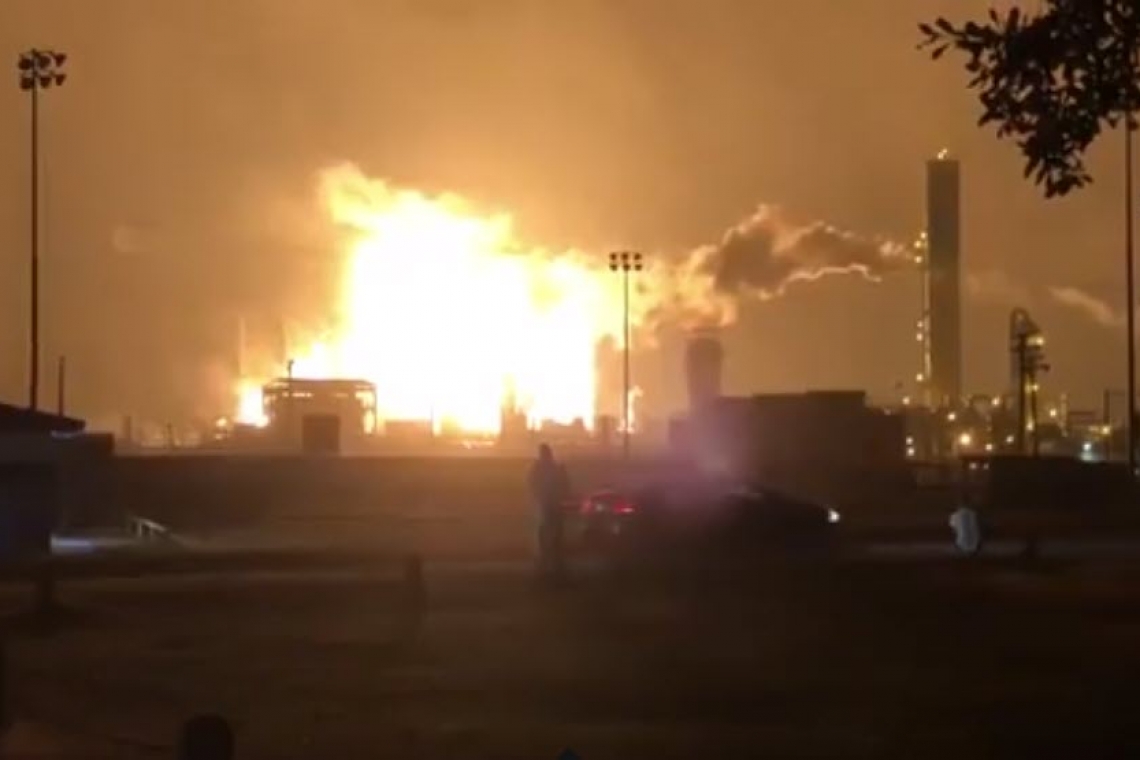 A massive explosion at a petrochemical plant sent a giant fireball into the air, blew out windows and knocked locked doors off hinges as it shook homes more than 40 miles away.

Witnesses in Port Neches, Texas, said the powerful blast at the TPC Group refinery, which contains extremely hazardous chemicals, "felt like a bomb" as it roused residents from their sleep with a deafening and alarming boom.

Residents living within a half mile of the inferno were told to flee their homes in city, which is east of Houston and just inland from the Gulf of Mexico, amid fears that toxic smoke or dangerous gases were wafting from the plant.

Three workers were injured in the blast, which was captured by doorbell cameras. The fire and subsequent explosions were so intense that they were detected by a local TV station's weather satellite.

Residents in the neighboring state of Louisiana also felt the explosion which sent flames shooting hundreds of feet into the air.

A search and rescue operation was launched at the plant after it was rocked by the explosion at about 1am local time on Wednesday, the day before the Thanksgiving holiday.

There were additional explosions as firefighters battled the inferno and people were urged to stay away from the plant, which produces butadiene.

The Environmental Protection Agency lists butadiene as carcinogenic to humans. It has been shown to cause cancer in lab animals and is primarily used to make rubber.

The cause of the blast was not yet known. TPC Group said it involved a processing unit.

Omar Hamza, whose home is less than a mile from the plant and was severely damaged, said "All of our garage doors collapsed, all the doors leading outside were completely broken, all the windows blew out, and the entire neighborhood was in panic."

The 22-year-old added: "I was packing for a trip tomorrow when I heard the bang. When I looked up I saw a bright flash and then watched all the doors and glass explode.

"I immediately grabbed my younger brother and genuinely thought someone had bombed the area or something."

Julizza Sanders, who fled her home close to the plant, said she was in bed when she heard what sounded like a truck hurtling towards her apartment.

She said "The sound got closer and as it got closer the ground started to shake. Then the entire building shook followed by a loud explosion sounding like thunder but much louder, mixed with a sound of an automobile crash.

"We jumped out of bed after the shaking stopped and realized that the sound we heard and thought was a crash was actually the sound of our front window shattering.

"We looked below our balcony and realized no one had crashed into our building. Then someone shouted 'It’s the plant'. We all looked up towards the back of our complex and in the sky was a large fire plume lighting the night sky in a bright orange hue. It raged growing larger as the seconds passed."

Ms Sanders, 31, added: "With the flames were clouds of smoke. I told my husband we had to get out of there right away, remembering what my father has always told me - to always leave the area of a refinery explosion due to the possibility of chemicals releasing into the air.

"We rushed to do the best we could to block our window, grabbed our phones, and wallet and purse.

"We got in the car and I realized I was shaking due to the adrenaline and anxiety caused by the shock. It was quite the scare.

"As we left the city we could see several vehicles stopped on a small bridge that leads into the city.

The drivers were standing out of their vehicles recording the flame balls and plumes as they grew behind us. It seemed almost as though it was dusk, a golden orange hue covered the sky as we left."

Local resident JT Teddlie, 32, said: "After the first explosion, there was a second, smaller, explosion.

"The first explosion, I've been told could be felt into Port Arthur. It was the TPC plant off Highway 366."

Another resident wrote in an email: "Blew out all the windows in the front of my home. We live not even a few miles from the plant."

Jeff Branick, a local judge at the Jefferson County Court, urged people living within a mile of the plant to flee their homes.

The judge told KFDM TV that the back door of his home was blown off.

The Nederland Volunteer Fire Department wrote on Facebook: "Please be aware that there is a mandatory evacuation for everyone within a 1/2 mile of the TPC plant in Port Neches.

"This could change and expand to a greater area, so please pay attention to your local news station as this situation develops since we may not be able to keep this page updated this morning."

Police Captain Crystal Holmes told Reuters that rescuers were "able to pull two injured employees out" and take them to local hospitals.

She added: "There is search and rescue inside the plant but there is also damage to nearby homes so we'll be going door-to-door checking on these people and their homes."

In a statement, TPC Group said three workers were injured in an explosion involving a processing unit.

The company said it evacuated the site and activated its emergency response plan, adding: "Right now our focus is on protecting the safety of responders and the public, and minimizing any impact to the environment."

Twitter users posted dramatic video and photos of the fire and damages to homes, including one where a ceiling collapsed onto a bed, and businesses.

One user said: "The plant by our house in Port Neches is on fire and an explosion went off like a BOMB and literally made our walls flex.

"Literally thought we were about to die."

Another wrote: "There was an explosion in Port Neches at 12:57. We felt it here in Vidor and people are even reporting feeling it in Sulfur, Lousiana.

"Everyone please be safe out there."

THIS WEB SITE IS IN SERIOUS NEED OF READER SUPPORT TO CONTINUE IN OPERATION THROUGH DECEMBER.  PLEASE MAKE A DONATION RIGHT NOW USING THE YELLOW "DONATE" BUTTON IN THE TOP RIGHT COLUMN OF THIS PAGE.