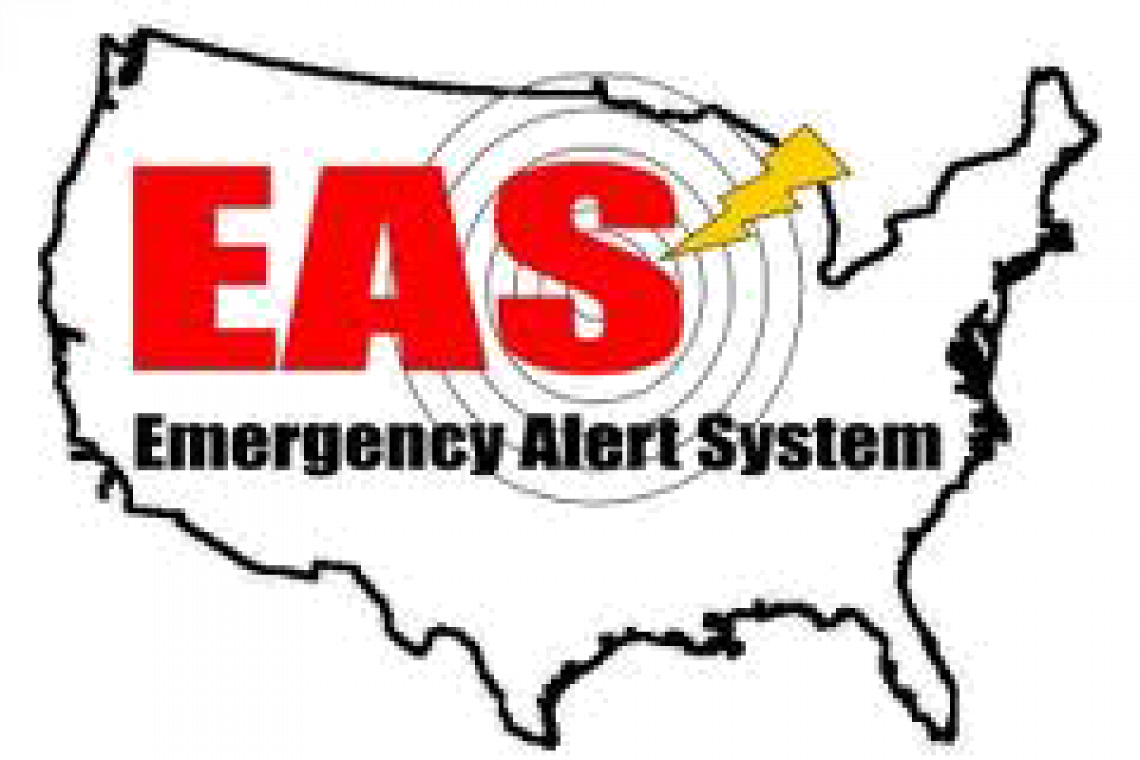 Today, Wednesday, August 11 , 2021, the United States government will conduct its first nationwide test of the Emergency Alert System (EAS) formerly known as the Emergency Broadcast System, but there is a VERY STRANGE WARNING as part of this test; The test will allegedly last 5-10 minutes and your TV and phones MAY HAVE TO BE REBOOTED after the test!

1> ABOUT THE 2 TESTS WHICH WERE RUN AT THE SAME TIME:

All I saw was my neighbor running down the
street wearing foil around his head screaming
"I can't take it anymore!"
# Oh,I Forgot.... — LassieLou 2021-08-11 17:39
Had two helicopters (one at a time,spaced maybe 20 minutes apart) heading for the Canadian border 1,before the alert,1 after,second bird moving pretty fast.Also 2 planes.....all MAY have be "apart" from alert &due to fire activities (of which I don't know of yet)
+2 # My report — Bundy 2021-08-11 16:57
It finally hit my radio station at 2:20 pm EST.
About 15 seconds into the static-laden audio and even MORE static-laden audio began, overtop the first... which seemed to sound like an echo or a loop of the original message. It continued to drown out into pure static for approximately 50 seconds and it was all over. The music resumed.
The test was MAYBE 1 minute 30 seconds in total... and an epic failure of the system, at that. Lol.
Just like the rest of our corrupted system.

I shut down 2 old phones I have kicking around and pulled the batteries. I also shut down my TV and computer at about 1:50 pm and turned the power off to the whole setup.

HOWEVER, when I shut down the computer, it took a bit of time to shut down. Like it was installing something. When I got it all back up and running at about 2:50 pm, there was an icon prompting me to "Re-start" my computer to complete the installation of an update. It's simply (innocently) listed as a "Cumulative Update" that happens once or twice a month, it appears.

* I'm ALL FOR the literal "kill switch" scenario in the movie clip.
+1 # RE: My report — carlireland34@gmail.com 2021-08-11 17:44
I have a mini desktop computer - it has Intel chipset that is programmed for remote network control (all Intel motherboards are).
Being an ex IT professional, I looked at fixing the BIOS to stop it - and found I could, but it was risky (you needed the exact fix for the exact BIOS version)
So, when I switch off, I kill the wall switch.
# poison dart for the unborn — selah 2021-08-11 16:18
https://nypost.com/2021/08/11/cdc-urges-covid-19-vaccine-for-pregnant-women/
# RE: poison dart for the unborn — carlireland34@gmail.com 2021-08-11 17:49
DANGER
The CDC is talking of approving the experimental vaccine in a few week.
Which means that legally, they can then mandate everyone is forcibly vaxxed.
# cdc can not approve — Aravinda 2021-08-12 23:28
Legal is not lawful.
No one can force you to participate or take a medical device or procedure WITHOUT informed consent.

A mandate is not a law.


The cdc or hhs has no legal or lawful constitution authority to make law or force anyone to do anything.

I had my satellite receiver and internet modem unplugged, but had a local FM radio station playing. There were no interruptions of any kind.

According to FEMA and the FCC, it was supposed to happen at 2:20 PM Eastern:

Just like I thought… it was a nothing-burger. Just something to stir the pot to see how much we’ll squirm.
+2 # What I'm Doing... — PopeyeTheSailor 2021-08-11 12:53
Ok, so IF they are going to download some nefarious software updates or apps that are keyloggers or whatever, then I'm going to shut my devices off at 1:30 and turn them back on at 4pm EST. The phones will go into the oven. I'm going to do this as a precaution. So what if my phone/tv/cable box is off for a few hours. I look at it like the death shot, better to be safe and inconvenienced for a few hours rather than begin part of the HERD!
+3 # IGNORE — Paul Kurzlee 2021-08-11 12:18
So After donny REFUSED outright to activate this system for the country we now get the honor of seeing it done by the pedofile stinky fingur for some F'd up reason. Best people can do is shut it off when it comes through (and surely it will this time) Better yet would be to throw these phones on the pavement and stomp them into small pieces of broken plastic. I do not have a TV or one of these phones and NEVER will have one. I have a landline phone. Just like in the old days. Refuse to participate in these things. Simply ignore what ever propoganda gets broadcast on that thing and just go on like it never occurred. Smash those phones and stop paying for them every month.
+6 # RE: TODAY at 2:00 Eastern Time: First Nationwide Test of Emergency Broadcast System - But strange Warning! — NDAlphaMale 2021-08-11 12:07
#1. Rush to get 5G network up and running
#2. Rush to get everyone vaxxed
#3. Turn on the network. Unfortunately, this will cause some “rebooting of systems”
+1 # CELL or Surrogates... — Mein.Dingus 2021-08-11 13:18
the movie w / John Cusack 'CELL' , could be very close to capable , but the movie Surrogates (Bruce Willis) is probably more accurate. With enough 'folded' graphine oxide from both shots 1 & 2 , along with boosters , the 5G millimeter wave could configure the graphine Oxide substance to become like RAZOR BLADES and migrate to the heart of brain - you basically bleed out internally (which is what we see in Surrogates. The remote control kill shot that would wipe out populations (like Dr. Who's sinister Darlek Master - DAVROS - remember this scene ? https://www.youtube.com/watch?v=dkelV2WUNdw)
+2 # RE: TODAY at 2:00 Eastern Time: First Nationwide Test of Emergency Broadcast System - But strange Warning! — CWD 2021-08-11 11:50
Funny not funny (video)

Wouldn’t that be some S**T

The "training" was updated to include HYPERSONIC MISSILE ATTACKS.
+2 # Distraction — gotalife 2021-08-11 10:45
Could this be happening to shut down Mike Lindells symposium on exposing the election fraud with hard facts and evidence?
It’s happening today.
Frankspeech.com
+8 # RE: TODAY at 2:00 Eastern Time: First Nationwide Test of Emergency Broadcast System - But strange Warning! — Gunner 2021-08-11 10:17
I don't know, I just get the feeling there is something "funny" with all of this emergency message stuff. I will unplug my equipment and power off my phone, etc, etc. What if, it is all related to the "Death Dart" and or 5G and special signals or frequencies being transmitted out via tv, cell phone, radios and it causes some odd reaction or even possibly worse to those who were dumb enough to get the JAB. . . Nothing would really surprise me anymore.
# Or,,, — debbifaye 2021-08-11 21:01
Data collection. And those who unplugged from the system would be mappable. At 1:59 you're connected and then you unplug the wireless connection, you cell signature disappears because its in the microwave, all of this would show up at a data collection point. Just a thought.
+1 # "Better safe than sorry" — Pierre Derelicto 2021-08-11 10:43
Smart move, I believe.
-1 # ... just read this: — Pierre Derelicto 2021-08-11 10:17
The latest entry into the "OfficialMcAfee" Telegram blog is interesting, indeed.

https://t.me/s/McafeeAfterlife
+4 # Armory — GodzHammer 2021-08-11 10:15
I drive past my local armory frequently. Nothing out of the ordinary this morning.
+4 # This really IS interesting ... — Pierre Derelicto 2021-08-11 10:11
I've heard NOTHING about it via any mainstream sources. At the very least, you'd think EVERY network would at least mention it -- since it will shut down their broadcasting capabilities.

I ran a search for it, and there's not one MSM news article that appears:

https://www.bitchute.com/video/uwzmXciLF6q0/
# Globalists will need this to tell all the goobers very soon to ignore various things that will start appearing in the sky as a "Hollywood's new holographic projector tests". — Harnaś 2021-08-11 09:56
Move on, there is nothing to see here. "Keep on working and making money. The red cross you are seeing in the sky is not a cross, but a holographic projection of Luke Skywalker's laser sabre (and a Kabbala message," may the force be with you)!

Am reading reports this will be in 10 countries today

We have never seen a nationwide blank screen scenario like this before.

For the X, Y, and any other young generation, this will be a severe test of internal fortitude.