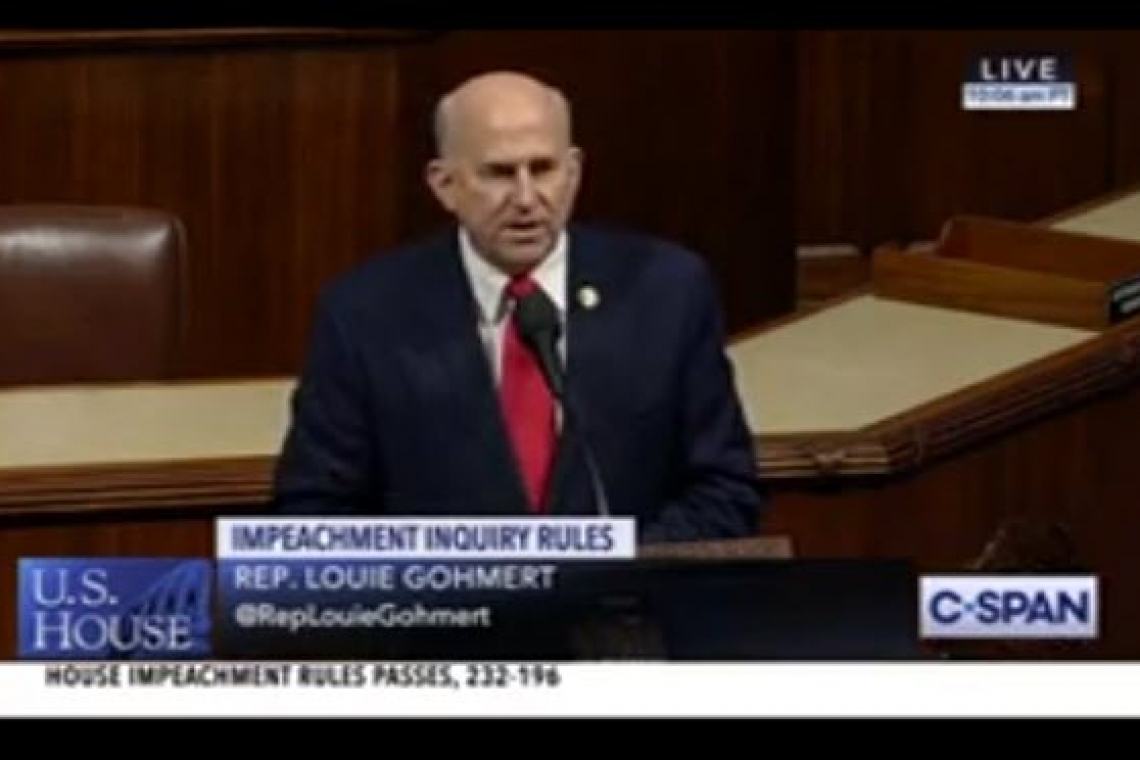 On the House floor Thursday, Rep. Louie Gohmert (R-TX) said the way House Democrats were running the impeachment inquiry into President Donald Trump was “about to push this country to a civil war.”

Gohmert said, “Never in the history of this country have we had such gross unfairness that one party would put armed guards with guns to prevent the duly authorized people from being able to hear the witnesses and see them for themselves.

And then, oh, we hear from this resolution today, we’re going to send you the depositions after we get through doctoring and looking at and editing the transcripts, we’ll send you those, so you have the evidence you need.

That’s not the kind of evidence that a coup should be based on. If we’re going to have what they’re trying to legalize as a coup, we ought to have a right to see each of those witnesses.”

He added, “You see, they want it to be a one-sided, non-due process, sham court. It’s about to push this country to a civil war if they were to get their wishes.

There is no such thing as a "civil" war, and I am finding it harder to be "civil" with those who want to make MY vote not count, while pushing for Invaders and Felons to have THEIRS count.

Pelosi & Schiff "Rules" are a perversion of American Jurisprudence and Rule of Law. No right for the Defense? No turning over Exculpatory Info discovered? What kind of an "Investigation is that? A Frame-Up!

We have a 2nd amendment for the scenario we are seeing currently.

Citizens have the Power to Remove those Traitorous Elected Officials from Office the easy way or the hard way.

As an adult I cant remember ever hearing so many sane people vocally expressing a belief that a civil war is coming. Not all for the same reasons, but almost all focused on the actions of the opposition party.

Today's Democrat leadership and most Dems are proving to be domestic enemies to the Constitution.

In the next few weeks: Order of Business

It now appears to many there's an actual fight coming.

Clean your guns. Have ammunition. Practice, practice, and practice some more.

Expect a False Flag Attack in the Coming Weeks Perpetrated by Democrats that will be blamed on Pro-Americans.

All 25 million US Military Veterans will be called upon to honor their Freely taken Oath.

I will have a LOT to say about this on my radio show tonight starting at 9:00 PM eastern US time.  Tune in either here on the net using the LISTEN ONLINE link above, or on WBCQ or KYAH.