U.S. East Coast Could be SUBMERGED by Tsunami at Canary Islands Volcano Eruption with Landslide! 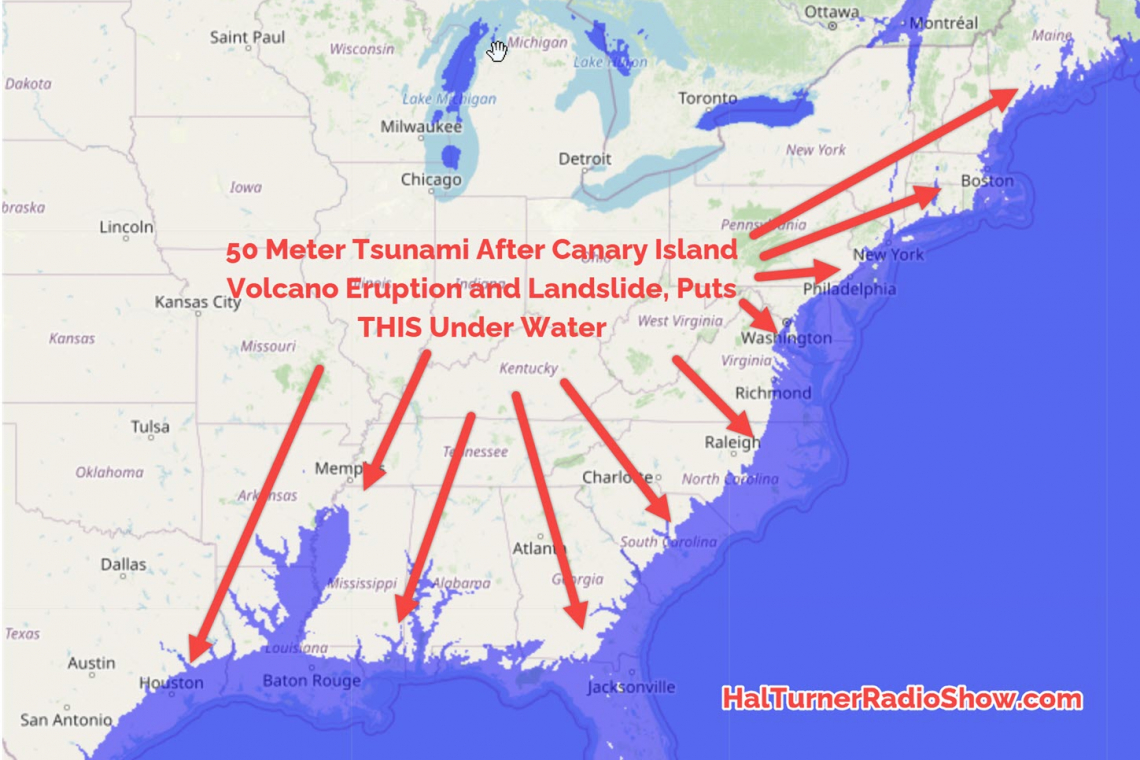 The entire east coast of the United States (and Canada) could find itself literally under water if the ongoing earthquake swarm in the Canary Islands results in a volcanic eruption and predicted massive landslide.   A Tsunami of 30 to 50 meters would obliterate much of the east coast, killing millions.

Since September 11, an earthquake swarm exceeding 4,222 earthquakes on the island of La Palma, part of the Canary Islands off the northwest coast of Africa, has been rumbling a large, unstable, section of land, the size of Manhattan, New York City.  This slab of land rises 6,000 feet above sea level and is angled sharply downward toward the ocean.

A past volcanic eruption there in 1971 made scientists aware that this slab of land had become terribly unstable, because volcanic vents and tunnels had made their way underneath the land.  Scientists predict that a future eruption could dislodge the slab, sending it crashing into the Atlantic Ocean below, and generating a mega-tsunami.

Seven hours after the landslide, the US/Canada east coast would be hit with a large tsunami wave, estimated to be at least 30 meters (about 100 feet) tall.

This wall of water would come barreling in to the east coast, obliterating everything in its path: Boston, New York, Philadelphia, Baltimore, Washington, Norfolk, Charleston, Savannah, Jacksonville, West Palm Beach, Ft. Lauderdale, Miami, all the Florida Keys, and everything in between those cities along the coast.

The flood map above paints the picture.  It's ugly.

Here is a larger version: 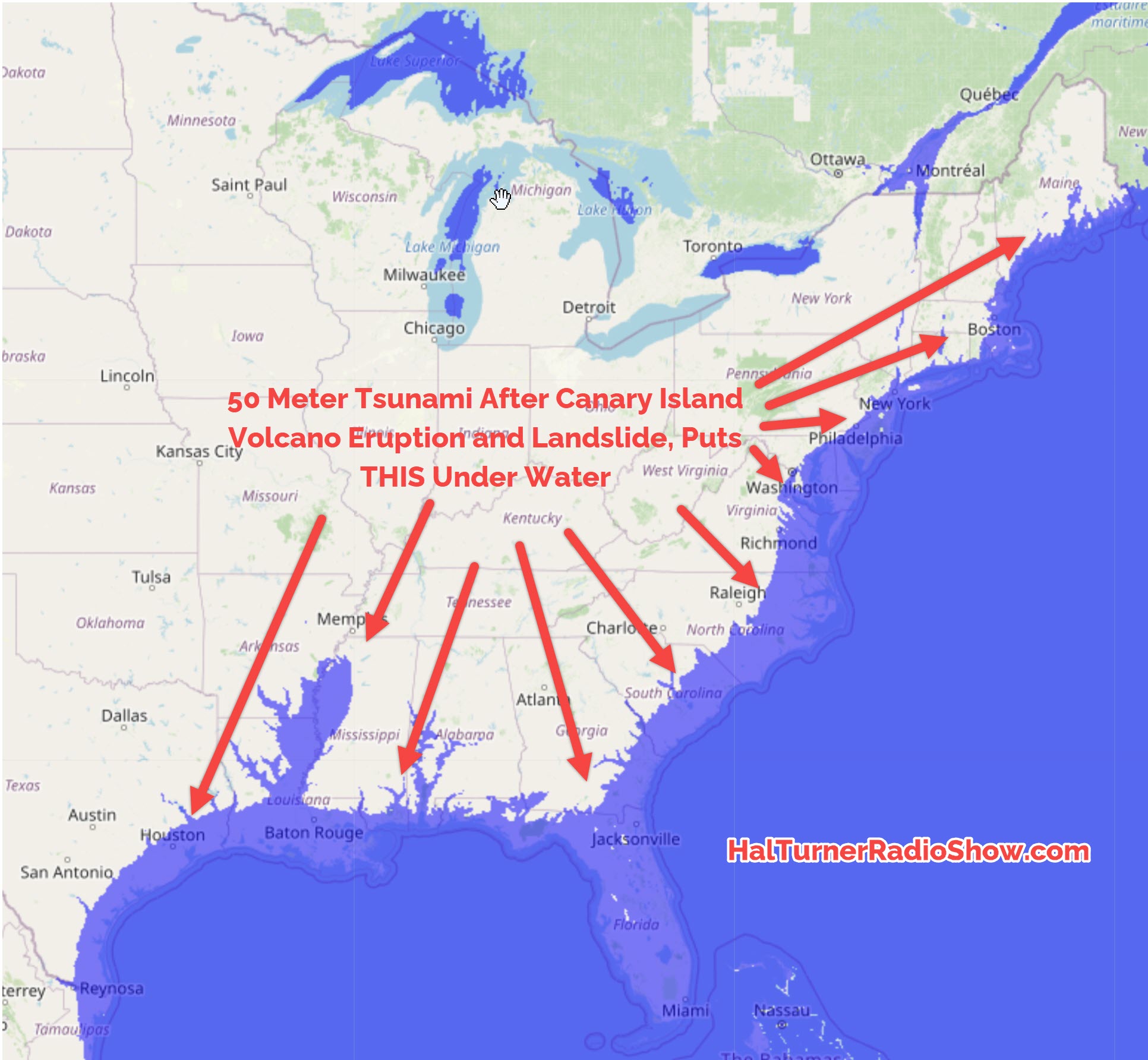 Worse, after completely flooding-over most of Florida, the Tsunami would continue on its path of destruction into the Gulf of Mexico.   Tallahassee, FL, Mobile, AL, Biloxi, MS, New Orleans, LA would be submerged.  The water would likely go all the way to Baton Rouge.  In Texas, they might lose Houston and everything along the Gulf coast.

If this earthquake swarm continues - and it is showing no sign of stopping, we could live through the worst natural disaster in recorded history.

People who live in the shaded Tsunami-flood-projected areas above MUST make preparations right now to evacuate on a moments notice.   Once the landslide takes place, the Tsunami would arrive along the east coast in about seven hours.  But once authorities issue the warnings, highways will be completely jammed, people will be panicking to flee for their lives.  Road rage will go Mad Max!

You cannot wait until authorities tell the masses.   YOU have to be ready to get out as soon as YOU hear the landslide happened.  That means having your car(s) gassed-up and ready to roll, with a "go-bag" of clothes, some food, cash money, and self-protection.  You have to have cash money because New York City is the financial capital of the USA and if it gets wiped out, all the banks go with it.  There won't be any credit/debit card processing -- anywhere in the country.  No cash?  No nothing!

YOU also need to know WHERE you will be evacuating to.   Make arrangements with friends or family well inland.  If you don't have any, find a hotel online NOW, so you know where you're heading once you get going.

That simple planning should give YOU a head start to get out to safety before the masses panic and get themselves killed in traffic jams, or in gasoline lines, or at ATM lines as the water arrives and drowns them all.

Tsunamis are serious business.   In 2004, one hit Banda Aceh in Indonesia.   Here are before/After pictures . . . it got obliterated.  In fact, Indonesia got hit by a 24 meter Tsunami, which is smaller than the one projected from a La Palma, Canary Islands, Volcano with flank collapse!  It KILLED 250,000 people. Look at what a 24 meter Tsunami did in 2004:

In 2011, a massive earthquake in the Pacific Ocean generated a Tsunami that hit Japan.  It lasted about twenty minutes, with a non-stop surge of water coming on shore from the ocean, wiping out everything and everyone in its path.  It ran more than TEN MILES inland in some places and killed more than 15,000 people.

Here, look - in 6 minutes, an entire city went from normal to utterly destroyed . . . the water just keeps on coming in:

Now imagine this same thing happening in Boston, New York, Philadelphia and all the other cities along the east coast.  It CAN happen as a result of a landslide off the Cumbre Viejo volcano on the island of La Palma in the Canary Islands, which seems to be building toward an eruption and potential southwest flank collapse, of an area the size of Manhattan, NYC.  The quakes have not stopped, the land mass that is unstable and is already showing signs of deformation, can simply fall off the island and cause THIS . . . 7  hours later, in the USA.

A full report of what is taking place on La Palma, and step-by-step reports of how it developed, and what it can do to us, is available HERE.

Prepare.  Now.   Once the authorities sound the alert, the masses will panic and a whole slew of people will get killed.  Don't be one of them.