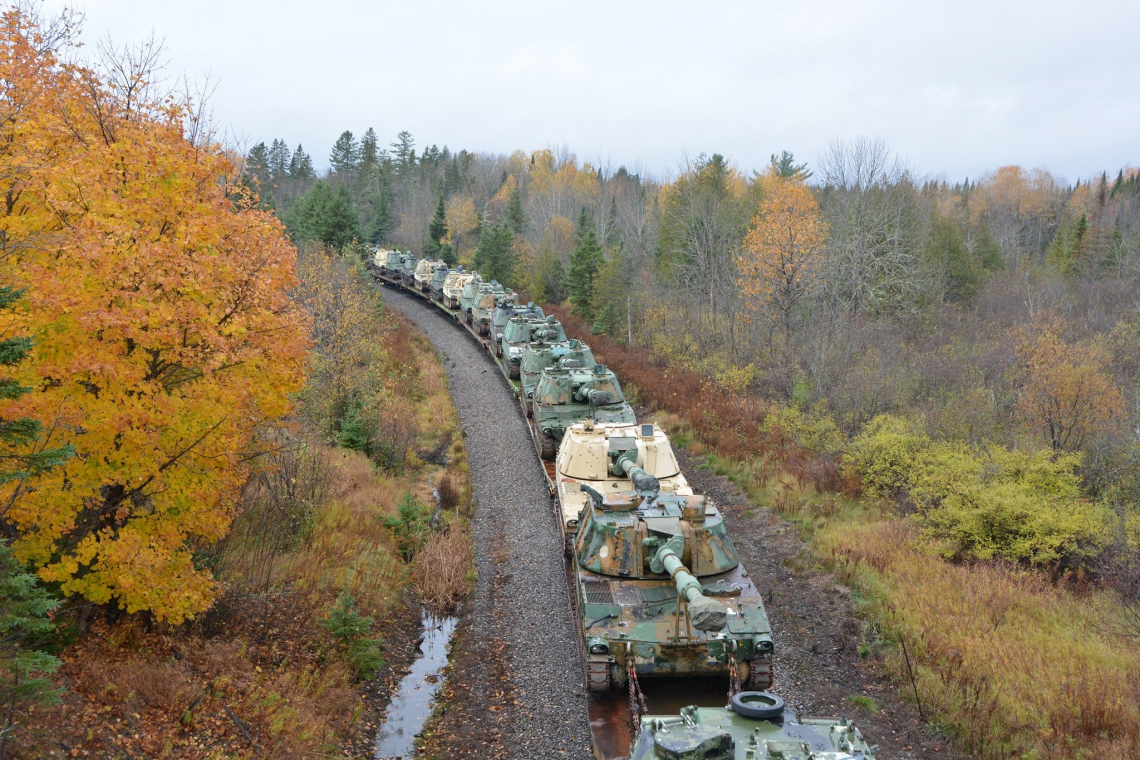 For weeks, stories have been coming out about large numbers of Chinese troops in Canada, near Vancouver, BC.  Now, more information indicates additional uniformed Chinese troops are mustering elsewhere near the US border in Canada; this time, along the Quebec and New Brunswick Province borders with Maine, USA.  The United States is now moving trainloads of heavy armor to that exact area.  Looks like a fight is coming, right here in the USA.

On Wednesday, a train carrying dozens of self-propelled Howitzers (artillery) was seen moving north from Hermon, Maine.   Local CBS-TV affiliate WABI Channel 5 reported "The artillery was being moved to Presque Isle, where it will be moved out of Maine to an unknown location."  Trouble is, once in Presque Isle, there are no more FUNCTIONING railroad tracks to go anywhere else.   Presque Isle is not a port; no ships to take the armor anywhere- so there's no where for this armor to go. 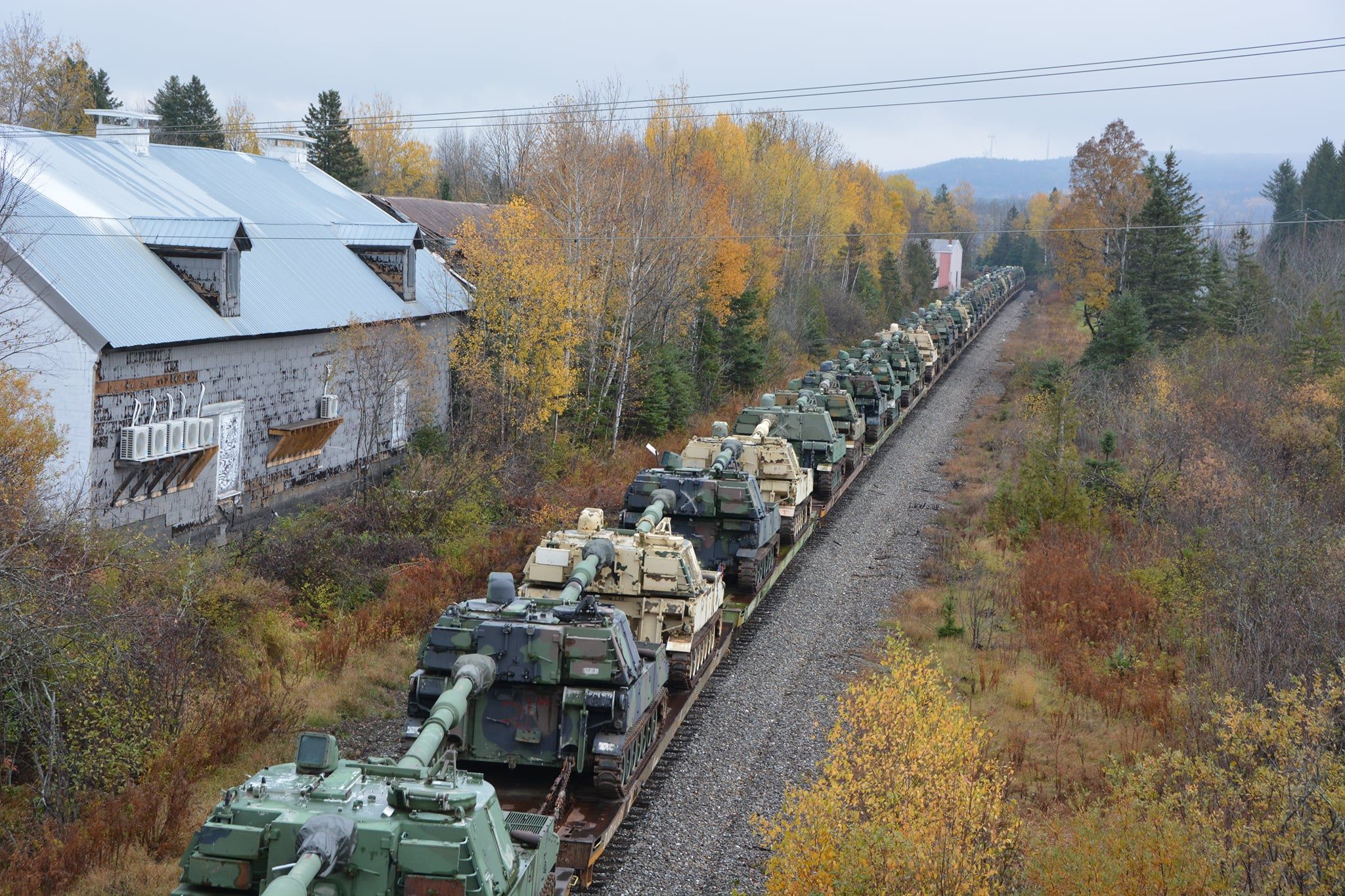 Turns out, these Howitzers are going elsewhere all right: closer to the Canadian Border near Quebec because, according to intelligence sources, "significantly large numbers of uniformed Chinese military troops are now confirmed to be in Quebec, near the US border." 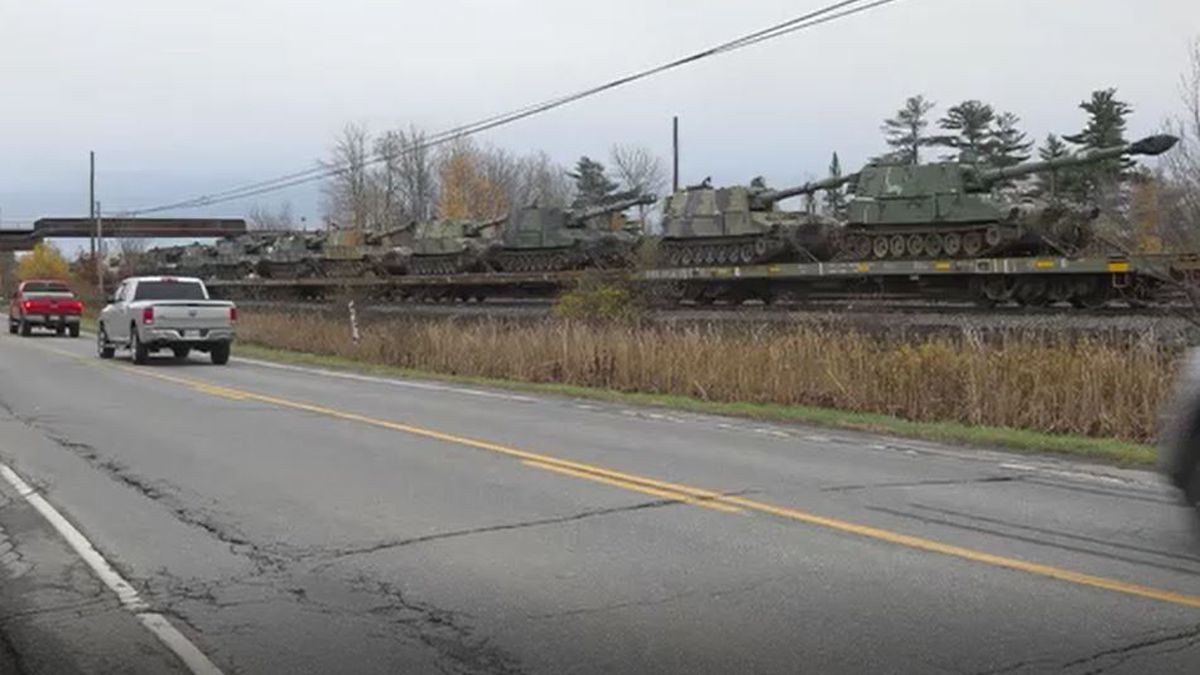 The scalable map below shows the area where the photos above were taken (Route 2), and the route to Presque Isle.  The railroad tracks run nearby the roads:

Moreover, information found on a Laptop computer owned by former Vice-President Joe Biden's son, Hunter Biden, allegedly contains proof that the Chinese Communist Party worked on a "biological outbreak" to shut down the US economy so China would not be the only nation suffering economically from President Trumps trade sanctions against China.

Information is starting to indicate the US Democrat Party may have actually been "in" on a deliberate Chinese Communist Party effort to use a bio-outbreak (COVID-19) to wreck the US economy, because Democrats knew it was the only way they could win the upcoming Presidential election.

Given the discovery of this information off a Hunter Biden laptop computer, it is now a possibility that China may have to actually invade the US to cover up the bio-attack, and take north America for the Chinese people who have outgrown their own land, and whose land can no longer provide enough food production to feed them all.

If Chinese troops commence an invasion, Americans are reminded they must shoot, shoot first, and shoot to kill.  No uniformed Chinese troops who are invading this land are to be shown any mercy or given any quarter.

In the sad event that some local or state official argues that maybe he can negotiate with the invading troops to protect local Americans as we are being taken over . . .  that official should also be shot dead - on the spot - for being a yellow-bellied coward and traitor to our nation.

Just a reminder of reality.

This may be the situation we face very soon.  Reports began coming our last week, that departments of the US federal government had begun warning large corporations to "prepare immediately" for a possible "Grid Down" situation, with emphasis on the Communications grid.  (Story Here)  If an invasion begins, cutting-off electric and communications would be a primary goal of the invader, to prevent Americans from spreading news of the invasion, and thus delaying a defensive response by America's heavily armed citizenry.

In the meantime, readers are advised to "prep" for whatever "Emergency" may crop-up.  Have Emergency Food, store-up emergency water, 1 gallon, per person in your home, per day - one week minimum supply.  Have emergency medicine, a first aid kit, fire extinguisher(s).  Gas-up your vehicles and keep them topped-off in case you have to "bug-out."   Have a "go-bag" for each family member with a change of clothing, underwear, flashlight, walkie-talkie in case you have to get up and run to survive.  Have emergency communications gear like a CB radio in your house and one in each vehicle, so you can keep in touch with nearby neighbors.  Keep cash money on-hand in case COMMS go down which would take credit cards and ATM's offline.   In such a situation, cash is king and without it, you won't be able to get . . .  anything.  People won't take checks in a situation like this.