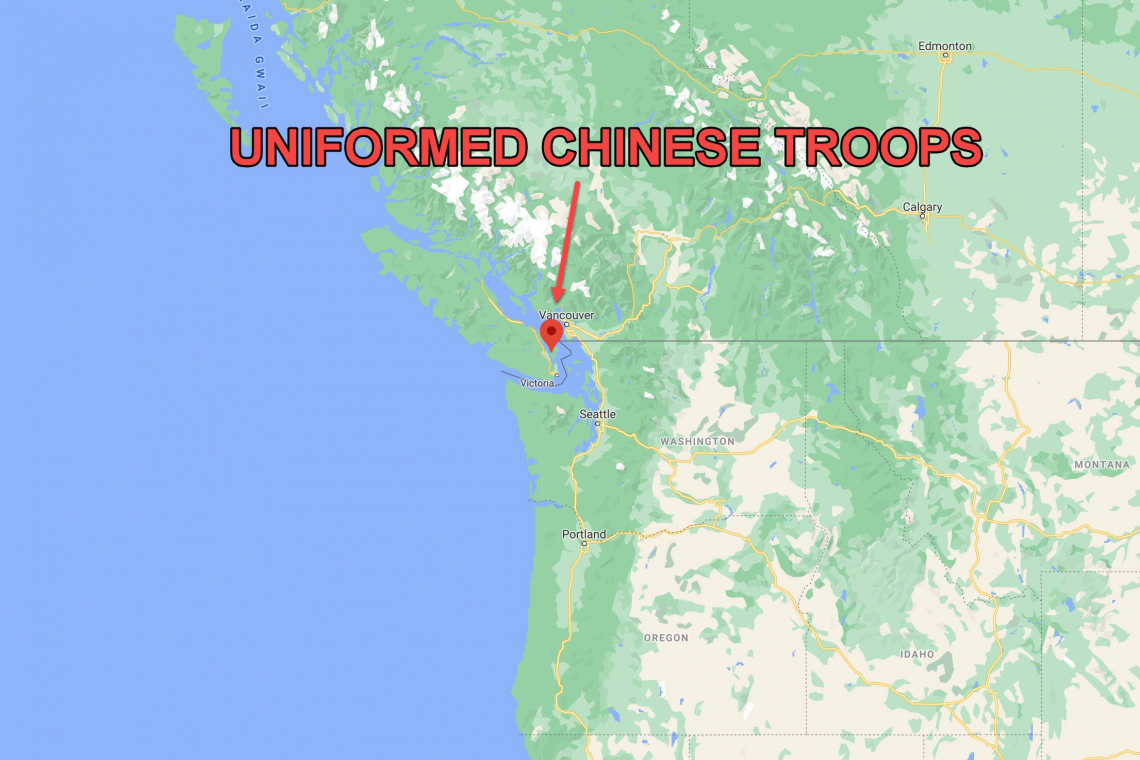 For many years, rumors have circulated about the alleged "massing" of Chinese troops, armor, and artillery in places like Mexico and Canada, being staged for a physical invasion of the United States.  Most folks - even me - laughed these rumors off.  I'm not laughing now . . .

Below is video from Salt Spring Island, near Vancouver, British Columbia, CANADA.   It shows uniformed Chinese military on a back road.

Here is a scalable map of Salt Spring Island you can zoom out to view its proximity to the USA:

I have no idea why these troops are there.

I have no information as to why the government of Prime Minister Justin Trudeau would allow such a thing.

Now that we have proof, it's time for questions to be asked of the Canadian government.  Explanation is required.

If this is a betrayal of the United States by the government of Canada, there will be consequences.

It turns out this actually IS a betrayal of the United States by the government of Canada and Prime Minister Justin Trudeau!

Under the terms of the Foreign Investment Protection Act (FIPA), a bi-lateral treaty ratified with China by the Trudeau government in 2019, Chinese security forces can be stationed on Canadian soil to protect vital Chinese investments, without the knowledge or consent of local authorities.                    – Canadian Independent Press Review, January 15, 2020

Now, not only is China stationing "security forces" on Canadian soil, locals are confirming that "tens-of-thousands" of troops from the People's Liberation Army have been flowing into British Columbia all year!   In fact, PLA troops are troops being stationed in Stanley Park in Vancouver as temporary housing until they are assigned something permanent.  Get this . . .Canadians CANNOT GO INTO THAT PARK because it is taken over by China's People's Liberation Army!   Anyone trying to enter the park is stopped by Vancouver police and refused entry unless they are PLA troops!

One Canadian tells me “You got ‘em (PLA Troops) all over the coast, man, based outta Prince Rupert. A bunch of their military intel people work outta their consulate in town and they can airlift the assault troops here in an hour, is what I been told.”

That same source went on to say "That’s how that fucking traitor Trudeau’s arranged it with Bejing, man. The west coast is theirs. They’re gonna be the ones managing the curfews and all the other shit that’s gonna follow.

So, ladies and gentlemen, our neighbor and ally, Canada, under the completely fraudulent guise of protecting Chinese investments, has betrayed the United States and is permitting China to mass invasion troops on Canada's west coast, for use in attacking and conquering the United States.

Americans are URGED to arm themselves and prepare.  Invading foreign army persons are to be shown NO QUARTER and NO MERCY.