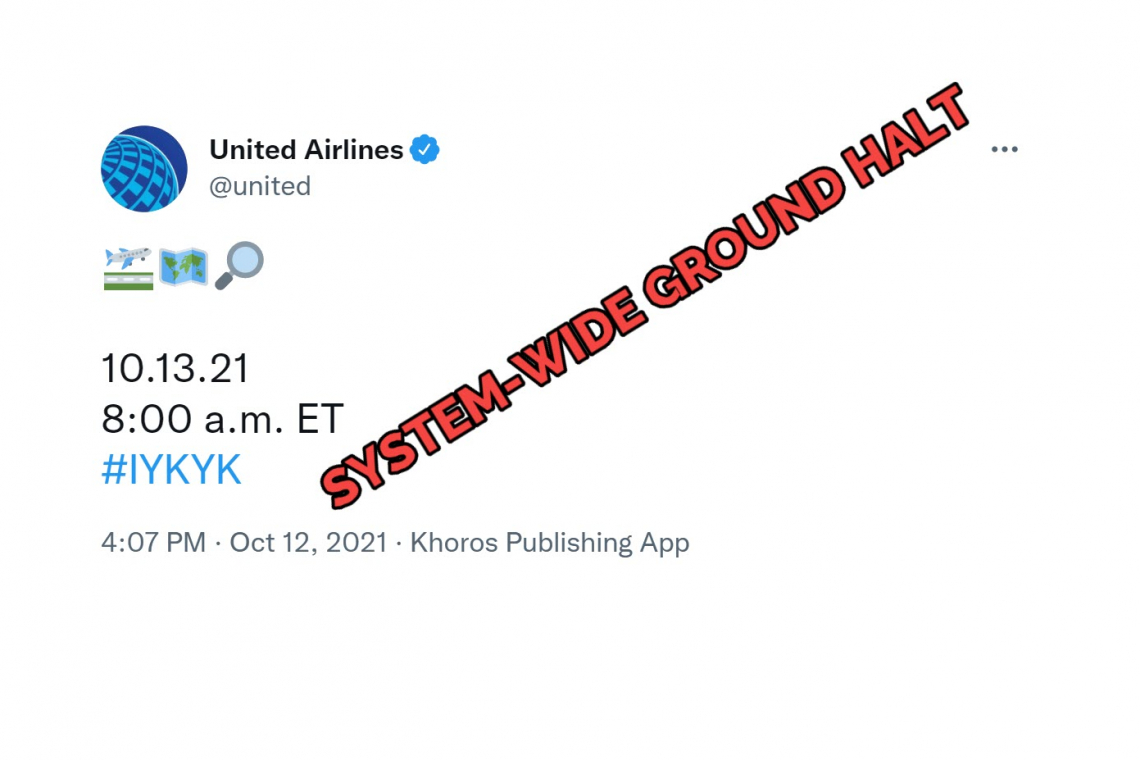 All United Airlines Flights in at least the entire United States, are presently under system-wide Ground Halt.  None can take-off from anywhere because . . .  get this . . . the Weight and Balance Main Frame Computer in Chicago . . . crashed.  Gee, looks like the vax mandates crashed their most important computer . . . what a coincidence!

Sitting on taxiway in DC. United Airlines’s. Pilot just announced a company wide “system reboot ,waiting for numbers to take off?” That’s a new one. Perhaps Southwest flu is spreading?

@united failing miserably along with the @FAA. There is absolutely no excuse to be make @SouthwestAir look good by stoping flights at IAD. If computer down fly the old fashioned way, let’s roll!

TIL that pilots working for @united are unable to use a pen & paper to calculate their own weight & balance. When the "weight & balance mainframe computer" in Chicago is down, all flights are grounded. And so we sit on the plane at the gate at CMH until the mainframe is up...😐

Management thought they were all big and bad "MANDATING" their employees accept a toxic, experimental, gene-altering, "vaccine" that doesn't seem to protect anyone from catching COVID or from transmitting it to others.  Even though a whole slew of people HAVE DIED from the vaccine, management ignores that reality and demands employees take the death-dart/clot-shot anyway.  Suddenly, the company's main computers are having troubles.  Gee, what a coincidence!

@United, not exactly. We are sitting on the ground waiting for weight and balance data from “the company”. pic.twitter.com/6L1bjQBUdx

Hey @united - more “technical issues”? We’ve been sitting in Denver on the tar for an a hour now “waiting on operations” …

@united what happened to the system? And why does it stop an individual aircraft from taking off after we have left the gate?

@united fuck you. why are we still not in the air, it’s been 60+ minutes with no notice, how have you still not solved your technical issues? you’re delaying all your flights now, this is ridiculous

Gee, United Executives, sounds like you've suddenly got a shit-ton of very unhappy customers.   HMMMMMMM.  Maybe you should re-think your "mandate?"  While you still have a company left to save . . .

@united captain says United computers are down. Can’t leave the gate. Thanks for nothing.

In Boston on a @united flight that is grounded while they report all of @united’s weight and balance software is down? Hello SAAS industry- sounds like opportunity to me. #unitedairlines #united

After all, how long can coincidences like this go on before the traveling public decides United is too unreliable to bother Booking with?

@united why is 212 still at gate at IAD, no weather, door still@open, should be taxing we got no info

#Breaking: @United has grounded planes due to system failure. Should have flown someone else…

Look, this is simple.  President Biden does not have Executive Order authority over the American people OR over American Corportions.   Nowhere in the Constitution for the United States is any President empowered to issue "Executive Orders" to anyone but the Executive Branch employees.

YOU, however, pursuant to the ninth and tenth Amendment to that same Constitution, have "powers not delegated to the United States by this Constitution, nor prohibited by it to the states, (which) fall to the states or to the people."

Biden does not have the power, so your states and WE THE PEOPLE, automatically have them.

IGNORE the federal presidential "mandate."  While you still have a company left to save.