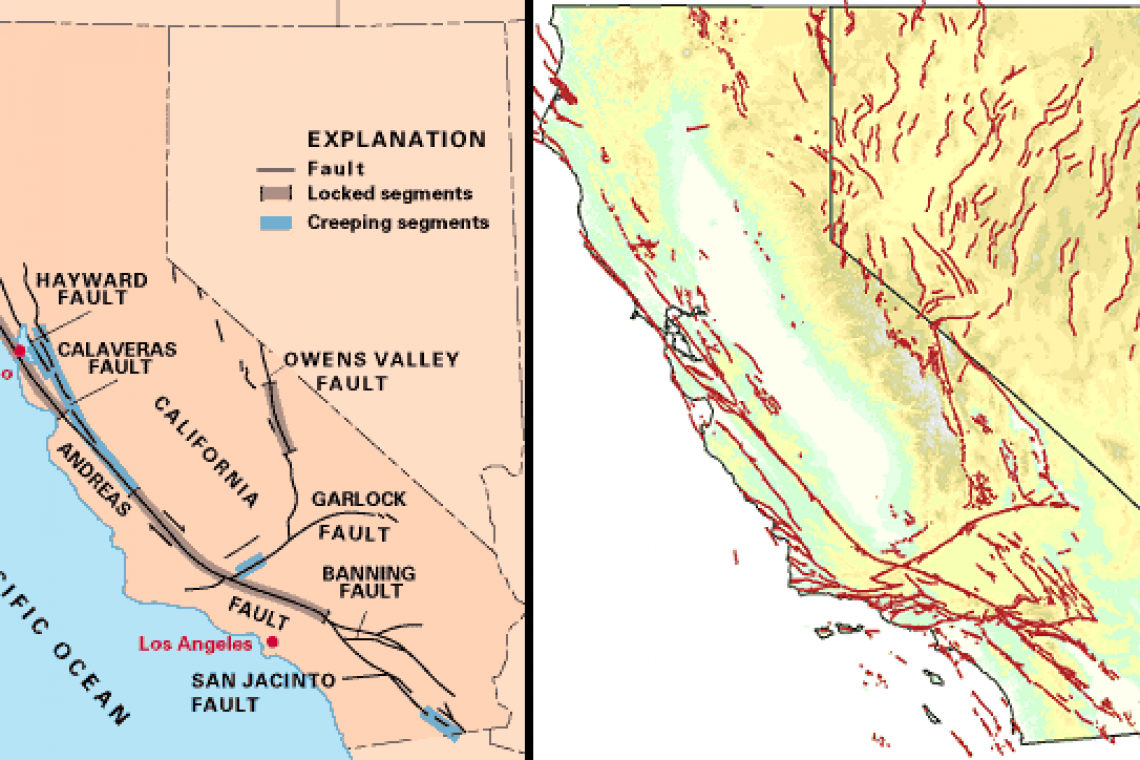 A major California fault capable of producing a magnitude 8 earthquake has begun moving for the first time on record, a result of this year’s Ridgecrest earthquake sequence destabilizing nearby faults, Caltech scientists say in a new study released in the journal Science on Thursday.

In the modern historical record, the 160-mile-long Garlock fault on the northern edge of the Mojave Desert has never been observed to produce either a strong earthquake or even to creep — the slow movement between earthquakes that causes a visible scar on the ground surface. But new satellite radar images now show that the fault has started to move, causing a bulging of land that can be viewed from space.

“This is surprising, because we’ve never seen the Garlock fault do anything. Here, all of a sudden, it changed its behavior,” said the lead author of the study, Zachary Ross, assistant professor of geophysics at Caltech. “We don’t know what it means.”

The observations reported are another piece of evidence that illustrates a widely persistent myth that circulates in California and beyond — that quakes like the Ridgecrest temblors are somehow a good thing that makes future quakes less likely. In fact, generally speaking, earthquakes make future earthquakes more likely. Most of the time, the follow-up quakes are smaller. But occasionally, they’re bigger.

The creeping illustrates how the Ridgecrest quakes that began on the Fourth of July have destabilized this remote desert region of California between the state’s greatest mountain range, the Sierra Nevada, and its lowest point, Death Valley. Not only has the Garlock fault begun to creep in one section, but there’s also been a substantial swarm of small earthquakes in another section of the fault, and two additional clusters of earthquakes elsewhere — one south of Owens Lake and the other in the Panamint Valley just west of Death Valley.

Whether the destabilization will result in a major quake soon cannot be predicted. In September, the U.S. Geological Survey said the most likely scenario is that the Ridgecrest quakes probably won’t trigger a larger earthquake. Nevertheless, the USGS said that the July quakes have raised the chances of an earthquake of magnitude 7.5 or more on the nearby Garlock, Owens Valley, Blackwater and Panamint Valley faults over the next year.

Also, a creeping fault triggered by a nearby quake doesn’t necessarily mean a big quake is coming. The southernmost tip of the San Andreas fault has traditionally crept in response to distant quakes, including the magnitude 8.2 quake off the coast of southern Mexico in 2017, nearly 2,000 miles away. “But that doesn’t mean the San Andreas went off,” said USGS research geologist Kate Scharer, who was not part of the study.

What’s unusual now, Ross said, is that the Garlock fault has been seismically quiet in the historical record until now. And while it’s unclear what the creeping and aftershocks might mean for the near future, the newly recorded movement highlights how much of a potential risk the Garlock fault is to California, should it rupture in a big way.

A large quake on the Garlock fault has the potential to send strong shaking to the San Fernando Valley, Santa Clarita, Lancaster, Palmdale, Ventura, Oxnard, Bakersfield and Kern County, one of the nation’s most productive regions for agriculture and oil. Important military installations could also get strong shaking, such as Edwards Air Force Base, Naval Air Weapons Station China Lake and Fort Irwin National Training Center. The fault is crossed by two of Southern California’s most important supplies of imported water — the California and Los Angeles aqueducts — and critical roads like Interstate 5, state routes 14 and 58 and U.S. 395.

A major quake on the Garlock fault could then, in turn, destabilize the San Andreas. A powerful earthquake on a stretch of the roughly 300-mile-long southern San Andreas fault could cause the worst shaking the Southern California region has felt since 1857, and send destructive tremors through Los Angeles and beyond.

The research was authored by some of the nation’s leading experts in earthquake science at Caltech in Pasadena and NASA’s Jet Propulsion Laboratory in La Cañada Flintridge — which is operated by Caltech.

The findings confirm what some scientists expected from the Ridgecrest quakes. The largest quake of the sequence, the magnitude 7.1 event on July 5, ruptured along 35 miles over a series of previously unidentified faults over 22 seconds. Its southeastern ends terminated just a few miles away from the Garlock fault.

The Garlock fault accumulates seismic strain at among one of the faster rates in California. According to USGS research geophysicist Morgan Page, who was not involved with the study, the average time between earthquakes of at least magnitude 7 on the central part of the fault is about every 1,200 years. But there’s huge variation; sometimes, only 200 years might pass between major quakes on the fault; then, however, it could be 2,000 years before an encore. The last time a big quake is believed to have hit the Garlock fault is about 465 years ago, give or take a century.

To some scientists, the physics of the magnitude 7.1 quake on July 5 immediately suggested that the Garlock fault would be more likely to rupture as a result. Here’s one possible explanation: The southwestern side of the fault that ruptured on July 5 lurched northwest. This had the effect of moving a block of land away from the Garlock fault, unclamping it and making it easier for blocks of land accumulating seismic strain on both sides of the Garlock fault to move — as if a bicyclist had decided to loosen brakes that had been gripping the tire tightly.

Satellite radar imagery shows that the part of the Garlock fault that has begun to creep is about 20 miles long, with the land on the northern side of the fault moving west, while the other side moves east. The radar images show one side of the fault has moved at its largest extent about four-fifths of an inch relative to the other.

Helping scientists has been state-of-the-art observations with incredible high-resolution details that haven’t been possible in any previous major California earthquake.

The Ridgecrest earthquakes struck in an area that has a particularly extensive network of earthquake sensors near the seismically active Coso Volcanic Field of Inyo County, which uses heat from magma to fuel a power plant. More seismic stations have been installed since the last big Southern California quake in 1999, and there is now frequent satellite radar imagery taken of the Earth’s surface.

Besides the Garlock fault, there is also reason to focus on risks from other nearby faults.

There is a line of potentially ripening fault zones along the so-called Eastern California Shear Zone, one of the state’s most significant seismic zones, which carries a good chunk of the earthquake burden needed to accommodate tectonic plate movement as the Pacific plate slides northwest past the North American plate.

They include, generally speaking, an unruptured segment about 30 miles long between faults that ruptured in the 1872 Owens Valley quake and the Ridgecrest quakes, and another 75-mile gap along the Blackwater fault system between the faults the caused the Ridgecrest quakes and the magnitude 7.3 Landers quake of 1992. Some day, those fault segments will eventually need to rupture to catch up with the movement of the tectonic plates, but it’s not known if that’ll happen in our lifetime.

Earthquake scientists not affiliated with the study called the discovery of the triggered creep on the Garlock fault scientifically interesting that should be understood better, but emphasize that its implications are not clear. Although the Garlock hasn’t been observed to creep before in response to big quakes, other faults that have crept haven’t been seen to rupture in major quakes.

“It’s actually probably pretty common, and if that’s the case … that doesn’t necessarily mean it’s portending something terrible,” said Page of the USGS.

Also, the creep observed was only probably in a relatively shallow area. “What we’re really interested in is what happens at the depths of where earthquakes occur,” said USGS seismologist Elizabeth Cochran, who was not involved with the study. Earthquakes typically occur between 1 mile and 10 miles deep; the creep calculated probably occurred in the shallowest hundreds of feet below the surface.

More research needs to be done on whether the releasing of seismic energy in the form of a creeping fault near the surface advances or slows a subsequent earthquake, said Scharer of the USGS. In this particular case, the amount of creep and its shallowness would do little to affect the timing of when the next earthquake strikes the Garlock fault, Scharer said.

Despite the uncertainty, what’s happening in this region bears close scrutiny, given how the Garlock fault is an important major fault for Southern California. There are few big earthquakes that have been observed in California in modern times, and just because something hasn’t been observed in the past doesn’t mean it can’t happen.