The far-left Washington Post blackmailed the country Thursday with a threat framed as analysis that says only a landslide victory for Joe Biden can save us from violence.

Because the Post piece is both fake news and irresponsible, I’m not going to compound those sins by linking it here. The Post’s tweet advertising the piece (which I also won’t link) sums up the threat perfectly: “The election will likely spark violence — and a constitutional crisis,” the tweet reads. “In every scenario except a Biden landslide, our simulation ended catastrophically.”

Only a Biden landslide can save America from a national catastrophe.

That’s a nice country you got there. Be a shame if anything happened to it.

The Post’s bald-faced threat is couched in a piece of analysis that does not even attempt to be serious, especially in a country where, as I write this, countless Democrat-run cities are on fire thanks to Black Lives Matter and Antifa, two left-wing terrorists groups who operate as Brownshirts for the Democrat Party and media outlets like the Washington Post — who regularly encourage and protect these domestic terrorists.

Even more ludicrous, the Post’s threat is only made possibly by way of its cherry-picking of “experts.”

They make it all so official-sounding. I’ve emphasized the howlers:

President Trump has broken countless norms and ignored countless laws during his time in office, and while my colleagues and I at the Transition Integrity Project didn’t want to lie awake at night contemplating the ways the American experiment could fail, we realized that identifying the most serious risks to our democracy might be the best way to avert a November disaster. So we built a series of war games, sought out some of the most accomplished Republicans, Democrats, civil servants, media experts, pollsters and strategists around, and asked them to imagine what they’d do in a range of election and transition scenarios.

A landslide for Joe Biden resulted in a relatively orderly transfer of power. Every other scenario we looked at involved street-level violence and political crisis.

I swear I’m not making that up. I know it sounds like something I’d make up, especially something as hilarious as a “Transition Integrity Project” operating from the same Washington Post hellhole that led the fake news propaganda jihad for the Russia Collusion Hoax coup plotters. But it’s all real. I swear. Look it up if you don’t believe me.

Anyway, the Transition Integrity Project’s war games (can you believe they used the term “war games?”) are staffed only with ringers. The “accomplished Republicans” are all — and I do mean all — bitter, half-witted, Trump haters:  Michael Steele. Bill Kristol. Trey Grayson.

On the other side are only Biden loyalists: John Podesta. Donna Brazile. Jennifer Granholm.

Not even one disgruntled Bernie Bro.

So the Transition Integrity Project asked six people who fucking hate Donald Trump something about Donald Trump and the answer is not looking so good for Donald Trump.

So even though Joe Biden’s supporters are right now — I mean right now as I write this — burning down a whole bunch of Democrat-run cities and Joe Biden has said almost nothing to stop them and PLENTY to encourage them, the Transition Rigged Project talked to six people who fucking hate Donald Trump and came to this bottom line [emphasis added]:

In every exercise, both teams sought to mobilize their supporters to take to the streets. Team Biden repeatedly called for peaceful protests, while Team Trump encouraged provocateurs to incite violence, then used the resulting chaos to justify sending federalized Guard units or active-duty military personnel into American cities to “restore order,” leading to still more violence. (The exercises underscored the tremendous power enjoyed by an incumbent president: Biden can call a news conference, but Trump can call in the 82nd Airborne.)

Here’s something else the Transition Rigged Project war gamed:

In the “narrow Biden win” scenario, Trump refused to leave office and was ultimately escorted out by the Secret Service — but only after pardoning himself and his family and burning incriminating documents.

If Trump wins, the organized left, and you can bet that includes media outlets like the Washington Post, intend to declare war on us. On you and I.

That’s what the Democrat Party’s and the media’s Brownshirts in Black Lives Matter and Antifa are doing right now in Kenosha and Rochester and Minneapolis and Portland and will do in any other place where an excuse can be found or manufactured.

The war is a hot war. If Trump wins re-election it’s going to get hotter.

The Washington Post is warning us — not just that there will be a war if Trump loses, but that we will be blamed for the war.

Hey, we warned you if you didn’t pay for protection your store would burn down.

Hey, we warned you if you didn’t vote for Joe Biden your store and your home and your car and your life would burn down.

This is not a drill.

This is a threat.

SUGGESTED PREPS: (No, not food & Gear)

1) Find out the name and address of your local elected "County Committee" members.

For election purposes, each of the fifty states inside the USA are divided into Wards and Districts (or Precincts) within each and every town.  Solely as an example, and not seeking to impute, imply, or suggest anything at all, I show you a Ward-District Map from a town near my home in New Jersey solely to give you a sense of what I'm talking about: 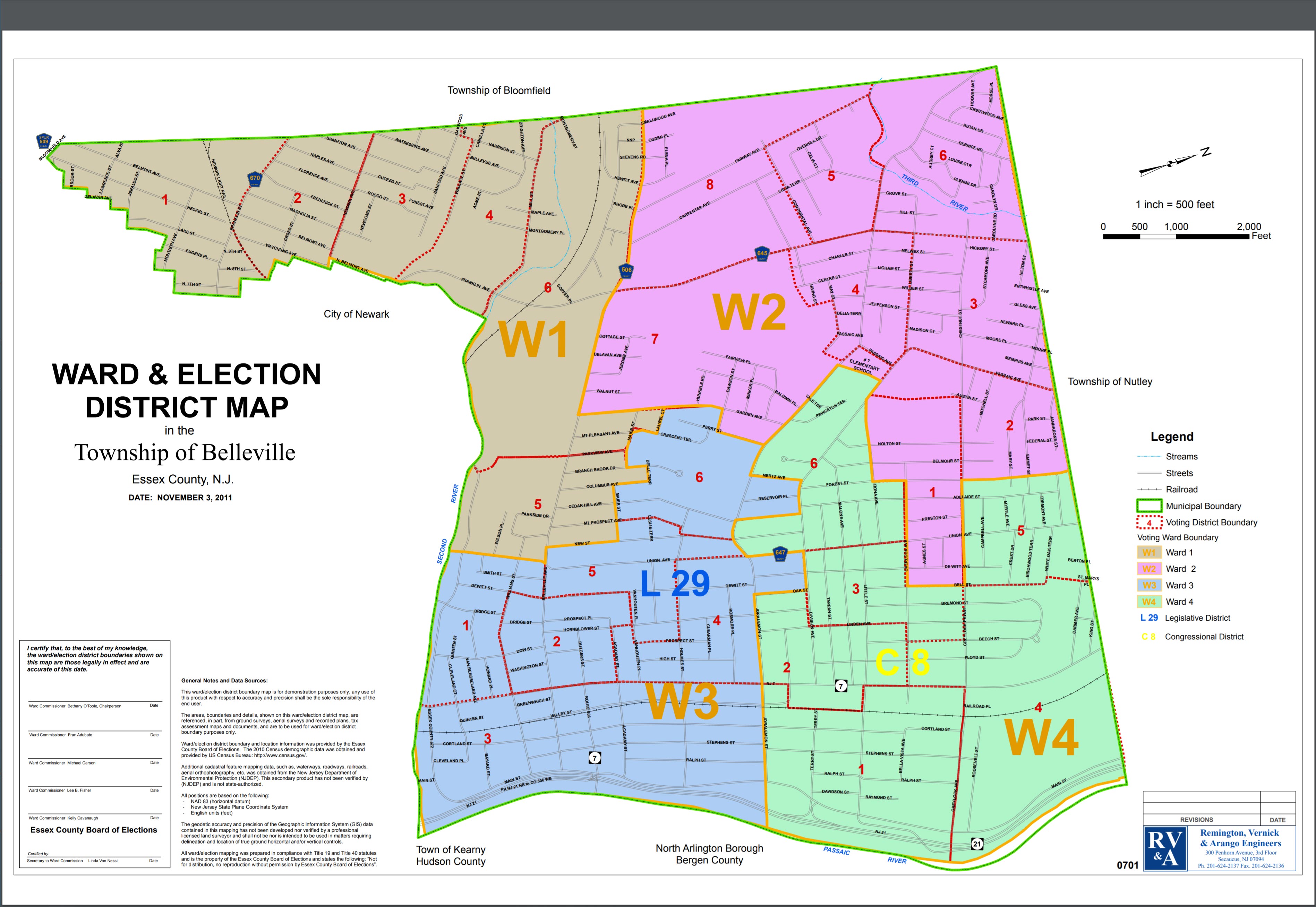 On the map above you see the Township of Belleville, NJ with each Ward identified by "W-#" and within each Ward are Red numbers indicating the District number.  Districts are VERY SMALL areas, usually only a few square blocks.   Why this is important is because each of those red numbered Districts has ELECTED County Committee people; usually one male and one female for the Republican Party and another Male and Female for the Democrat Party.   They are all very close to where you live and if you don't know who they are, or where they live, FIND OUT.

The reason you want to know who these people are is because THEY are "the machine."  The political machine.   They are involved in almost EVERY aspect of politics, from your local Mayor and Town Council, to the School Board, to the County Commissioners, to State Representatives & Senators in the larger Legislative Districts, to the large Congressional Districts.  These are the people who get things done politically.  If there is going to be Voter Fraud and Election Cheating for the upcoming November election, it is AMONG THESE PEOPLE (but not all of them) who will be in on it. If they don't do it themselves, they absolutely, positively, WILL know who it is that did it.

2. Find out the name and address of your  Republican and Democrat Municipal Chairmen for your local town.

The Municipal Chairman is elected by the County Committee people within each town, but merely handles matters political within the town.

3. Find out the name and address of your Republican and Democrat COUNTY Chairmen

Now, we're getting into real power.  The County Chairmen are the ones who give a "yea" or "Nay" to almost every candidate seeking election at almost every level.

4. Find out the names and addresses of your County Election Officials.

Solely for informational purpose, so readers get a sense of what I'm talking about, below I show the listing of official COUNTY LEVEL ELECTION officials.  Notice how they do NOT list the names?   This is where research must be done by YOU for YOUR County, so you get the names! 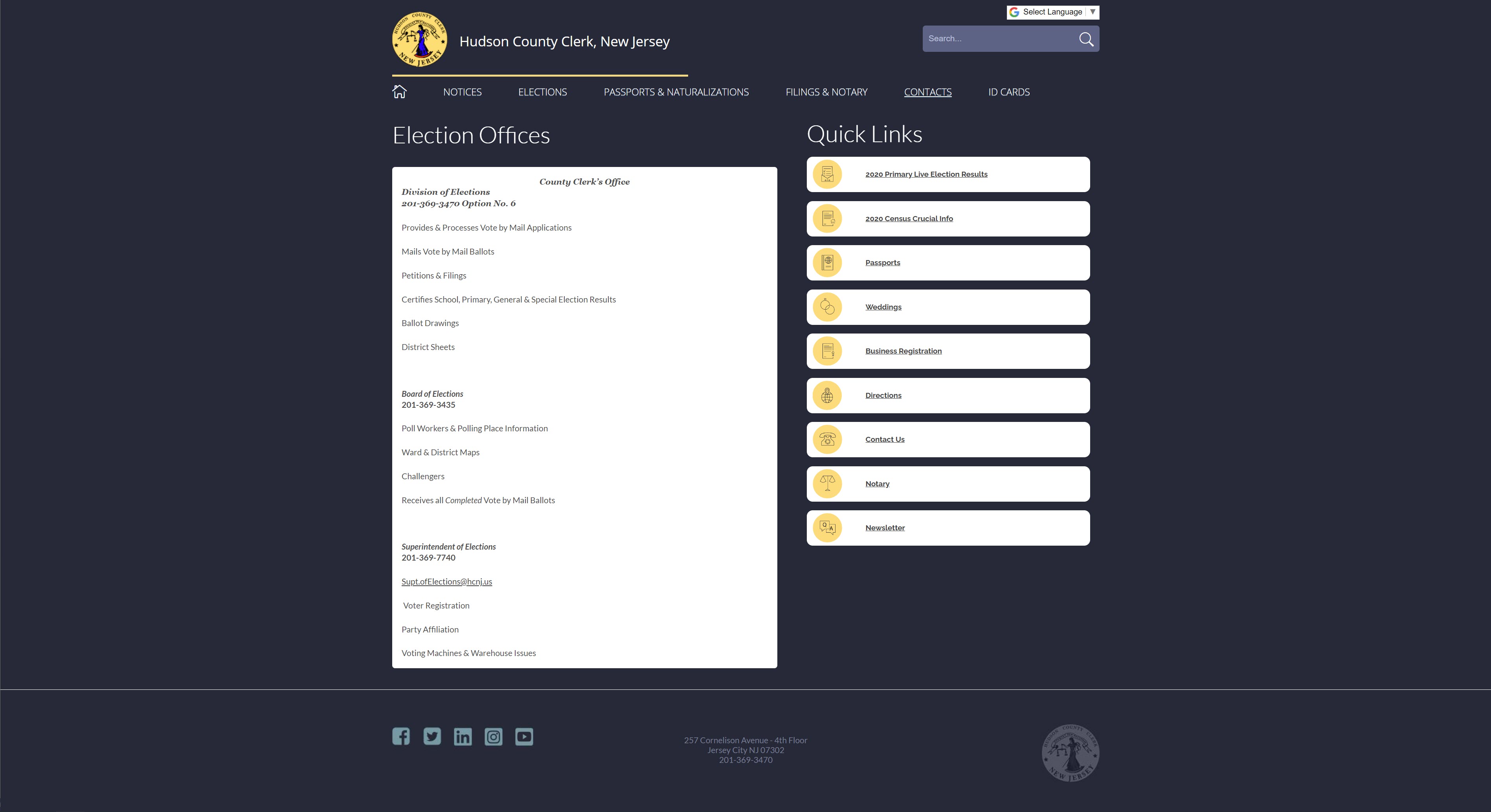 5. Find out the name and address of your Republican and Democrat STATE COMMITTEE

These are the people who handle matters political at the State Level.  They get input from all the County and Municipal Chairmen about every candidate seeking election and they decide at the state level who gets money and machine support.  But while they are at the state level, they are also DEEPLY involved in selecting candidates for FEDERAL offices like Representatives in Congress and US Senators.

Once you've completed this research, which should take only a couple hours, you now have a list of people - and where they live -- who can be held accountable BY YOU PERSONALLY if Fraud or Cheating deprives you of your effective vote.

6. Make a list of MEDIA PEOPLE who have been making trouble for the past four years.

Local Newspapers, Local TV, Local Radio.  Only those of us on both coasts will generally have access to the NATIONAL media people, the big network news types, the late night hosts, big name Hollywood types and the like, so you restrict your list to the LOCAL/STATE you're in.

Remember, the ONLY people you put on your list are folks who have been causing trouble: Intentionally reporting fake news (Russia collusion, COVID nonsense, Backing illegal aliens remaining here, etc.), lies and distortions, spinning and manipulating stories for a clear POLITICAL purpose.  These should be people whose efforts have been subverting our Constitutional Republic, subverting the nuclear family, pushing cultural deviancy, pushing the destruction of our way of life via illegal immigration and the like.

Now, you have a blue print for actual action, BY YOU PERSONALLY, in the event things go wild-weasel in our country after the November election.

You'll know "who is who" where they are, and at that point, you will have to decide what -- if anything -- to do about it.

The best part is you won't be one of the tens of millions sitting in fear in your house watching things fall apart and having no idea at all what to do about it.  YOU will have options.  YOU can do something about it because you found out in advance Who's Who and where they are.

If some of these people think they can push the phony Russia Collusion hoax, push the phony Impeachment Hoax, push the COVID hoax, subvert our way of life with their phony virtue signalling and rabble-rousing, then sit back AND GET AWAY WITH IT when all their efforts result in destruction of our country, YOU will know that they are sadly mistaken.

Do NOT talk about what you're doing with anyone.  NO ONE.  Not even your family.  Just go about your effort quietly and efficiently, and keep the information to yourself.

7. This is like preaching to the Choir, so I won't take a lot of space talking about it:  Have Emergency food, water, medicines you need to live. Have emergency communication gear (CB and/or HAM radios, walkie talkies and the like.)  Have a means of self protection for you, your family, and your property.  Have a way to generate your own electric power (Generator or solar) and, of course, with Winter coming, have a source of emergency heat.  Have a way to cook during power/gas/water outages.

The left-wing is already telling us they expect violence if their guy loses.  It seems to me that the reason they expect it is because THEY'RE PLANNING IT!!!!

They can go right ahead and do whatever it is they think they're gonna do.