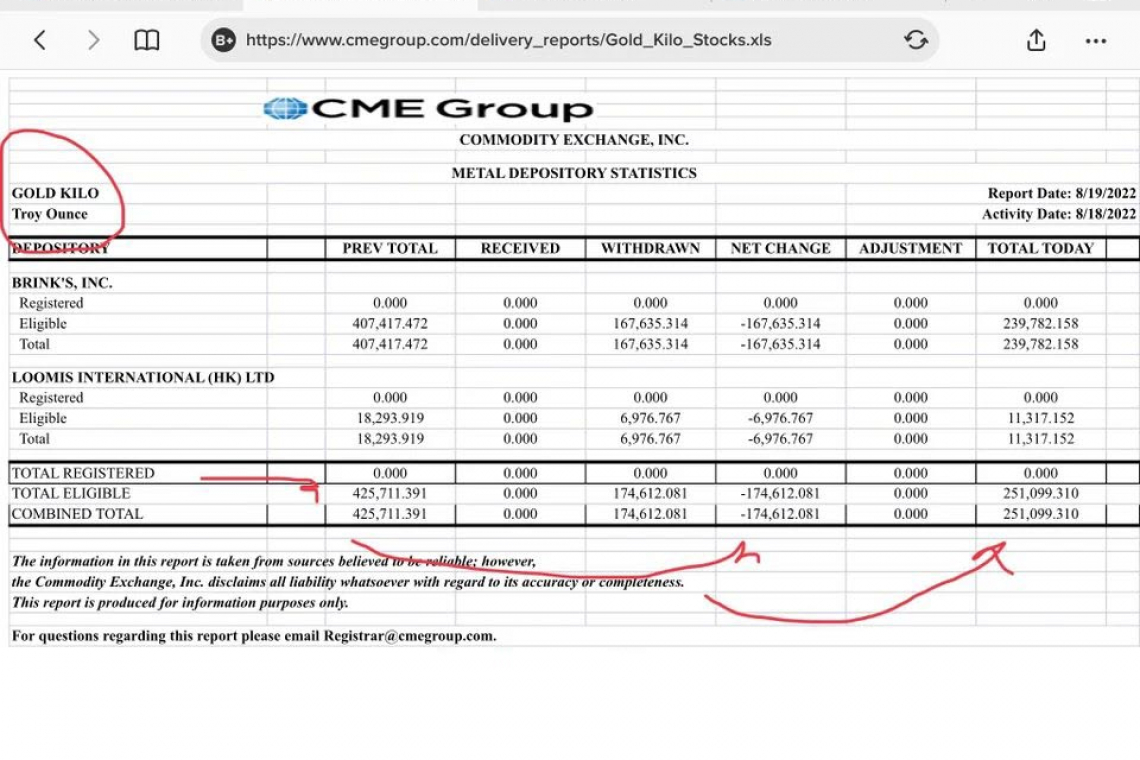 The uber-wealthy have withdrawn forty-one percent (41%) of the physical Gold Bullion from the Kilo vaults of the Chicago Mercantile Exchange (CME), in ONE DAY!

The chart above shows the staggering withdrawals from the CME Kilo Vault totaling 174,612.081 Troy Ounces

What's most interesting about this is the withdrawal was NOT the typical 400 ounce Gold Bars; it was Kilos.  Billions of dollars worth.

Sovereigns do not generally buy or hold Kilos of Gold.  So this is likely the smaller - but still very wealthy - pulling the gold out.

What is now taking place that the uber-wealthy, and "connected" individuals, have so suddenly decided to take physical possession of Gold?

What is coming that the wealthy want to physically have their gold rather than trust someone else to hold it?

Withdrawals of this magnitude do not happen very often . . . at all.

Clearly, the very wealthy think (or know) some calamity is coming, and they want their gold in their own hands before whatever is coming, hits.

I believe the withdrawals of bullion from Comex inventory is functioning the same as a bank run.

Individuals that hold their bullion at these warehouses have decided that it is no longer safe from fraud or confiscation and they are acting independently to find other venues for their bullion.

At some point, like we see in previous bank runs, there will be some sort of restrictions imposed to prevent bullion leaving the vaults. That is when this fraud breaks wide open.

It should not be a mystery . . . when Germany requested to repatriate some of the bullion in the custody of the Federal Reserve and were told to go pound sand. That gold is no longer there and the parasites had to find other gold from elsewhere to eventually deliver to them.

I would put the odds at zero that the Money Changers are playing by the rules with custodial bullion at Comex. Zero!

For sure some or all of that metal has been stolen and resold to multiple owners and as the inventory declines the scam will be revealed.

Same with Silver.   Long before the last ounce of silver is cleared out, the scheme will collapse. The only reason it has not done so already is because hundreds of millions of 'ounces' of silver have been delivered through EFPs and quietly settled in cash. Even that is getting long in the tooth and at some point people will just demand their silver - which is not there to deliver.

The smart guys are getting their bullion out of the warehouse now while they still can.

-1 # Strange book buying event! — Bobbyjames1 2022-08-22 23:02
I have been looking for s very special set of jewish books for a year.! This is the kind of books that are almost never sold and when it is its very expensive!
Last week shockingly several sets became available from different sellers. I purchased a pristine first edition set for a fraction of its value!
Form its owner in the bronx NY. This is very frightening to see the group that wears all black selling these holy books?
-1 # RE: WHOA! Forty-One Percent of Physical Gold PULLED from Chicago Mercantile Exchange Kilo Vaults in ONE day! — RAFO 2022-08-22 15:52
“If you can’t hold it, you don’t own it” — Steve Quayle. Truer words were never spoken.

These folks have realized when the cities are nuked, which they’re pushing for, the vaults and all the gold will vaporize. Moving it into underground bunkers in the boondocks.
-1 # Where are the vaults (not Chicago) — Elpidios555 2022-08-22 12:30
Where are the vaults? Does not look like Chicago...
NY: 7
Mass: 1
Delaware: 2
Hong Kong: 2
https://www.cmegroup.com/trading/metals/files/precious-metals-delivery-process.pdf

https://www.bullionstar.com/blogs/ronan-manly/comex-and-ice-gold-vault-reports-both-overstate-eligible-gold-inventory/
-1 # Interesting read — ell 2022-08-22 12:18
https://m.investing.com/news/commodities-news/energy--precious-metals--weekly-review-and-outlook-2876934
# Question: where was it stored? — Elpidios555 2022-08-22 11:43
Question: where were these kilos physically stored? Chicago? what building?

Remember what happened right before 9/11 in NYC? The script like the Diehard movie?
Interesting trend.... If a similar move, then pray for Chicago.
+2 # This Nations Economy — Forrest Mosby 2022-08-22 10:47
Was doomed when the [dim controlled]Congress started using the Social Security Trust Fund to pay for LBJ’s Great Society vote buying bullshit…Oh, I know, they covered the shortfalls by issuing 50 yr treasury bonds…essentially spend the money now and when we are all dead, that future government can pay for it…except those T Bonds are worthless and there Can Be no money to make good and those bastards in congress that spent that money ARE good and dead and out of our reach…
Get ready for it folks…Our doom is here; both our Nations and ours…
-1 # Wow Hal... — Adiff5466 2022-08-22 10:38
https://www.reddit.com/r/Wallstreetsilver/comments/wt6llu/you_have_been_reading_about_gold_leaving_the/

There was 40% of Gold pulled out on the 18th from the bullion warehouse, same day Amazon cancels 40% of orders and Walmart also. Next day 19th, Zaporozhye Nuclear Power Plant Reports 6-8 Explosions.

Then on the 21st we have "THE END GAME IS OUT IN THE OPEN: RADIATION LEAK FROM UKRAINE NUCLEAR PLANT "WILL TRIGGER NATO ARTICLE 5"

Now on the 24th, exactly 6 months since the start of Russia's "Special Military Operation"we have:-
2) On August 24, Ukraine will suffer a massive air and missile barrage destroying all the bridges across the Dnieper River, "Key Decision-Making centers", several electric generating stations, and the loss of Nikolaev and Odessa.

I believe in watching Gold as an indicator of coming world events, these withdrawals are significant signs that something BIG is coming.

Big money is getting out of fiat currencies like the U.S. dollar.
Bill Holter brokered what looks like the biggest U.S. silver coin
deal in history.

It was also reported this last July 26 that precious metals
dealer Bill Holter had a single customer who purchased
$50 Million in coins and the Silver Eagle, 1 oz, portion of
the deal was 650,000 coins. (That's more than 21 tons)
Only $27 million of that could be bought in U.S. incremented
silver coins.  (The rest was used to buy gold U.S. coins.)

Holter says, “We have had free and carefree times for the
last 40 years.  Now, you are going to see the reverse.  Debt
is a two-edge sword, and after 40 years, we are going to see
the dangerous side of the sword. . . .

VIDEO
usawatchdog.com/whole-world-is-a-banana-republic-bill-holter/
+2 # The game is "Ultimate Jeopardy" and we seem to be headed into it whether we like it or not — Man of the Atom 2022-08-22 03:23
"Comet or asteroid strike" for $200?
"Massive coastal earthquake with subsequent tsunami" for $500?
"Civilization ending Nuclear war" for $1000?

With a Glock of Sig 45....
+4 # Crypto-guy — Skywalker51 2022-08-21 21:49
Just liquidated ALL my crypto holdings to USD and deposited to credit union savings...took that physically bought gold, bullion, coins (large and small) plus other potential individual usage gold. This is the cheapest one will see for a long-long time. Plus it might get one out of tight and sticky spots later!

I'll be very interested to hear the financial commentaries on Monday morning.
+4 # RE: WHOA! Forty-One Percent of Physical Gold PULLED from Chicago Mercantile Exchange in ONE day! — Suzuko804 2022-08-21 20:52
Could be that any remaining gold there in Chicago will be vaporized by a bomb.
+9 # Gold and silver... — Gulfcaptain 2022-08-21 20:52
Gold and silver IS money. All else is paper. The uber rich along with nations such as India, Russia and China know that precious metals are wealth. They use paper to scam the masses, charge interest on that paper, inflate it or deflate it as they see fit and gain value from real goods (the equity) you have when you default.

However, they hold metals, gems, land and art. The rest is paper for the uninformed. Knowing that anything held in a bank can be ripped off (confiscated) it's best to keep it yourself. The Russians found this out the hard way.
+9 # RE: WHOA! Forty-One Percent of Physical Gold PULLED from Chicago Mercantile Exchange in ONE day! — Lambs Servant 2022-08-21 20:47
It’s also worth pointing out that the 10 year yield is rising which signifies instability in the debt market. When the debt bubble pops then we will witness something that mankind has never seen before. Precious metals is a safe haven. You want the physical asset. Not the paper assets.
+2 # Count on the Bolsheviks — HuskerMike 2022-08-21 23:57
to separate you from your money and hard assets, guaranteed! These new 87000 special agents won’t be doing tax audits, they will be doing asset forfeiture and confiscation, because why? Because they can……
+1 # Confiscation — oldschool 2022-08-22 07:35
when it begins, how long do you think it will take before the people wake up and begin to fight back .
+8 # RE: WHOA! Forty-One Percent of Physical Gold PULLED from Chicago Mercantile Exchange in ONE day! — Gunner 2022-08-21 21:04
These "paper games" have been played for way, way too long!!
+6 # I agree, — oldschool 2022-08-21 20:57
Just one thing, how are you going to protect it.
+2 # They may another metal — Man of the Atom 2022-08-22 03:12
Lead and lead alloys - lots of it.
Refresh comments list
RSS feed for comments to this post
JComments
by sur.ly
100% Trusted Informational Platform Website 2021