18 Planes With Paratroopers Headed for Kiev?

UPDATED 8:08 PM EST THURSDAY (SEE BOTTOM) -- As of 12:07 PM eastern U.S. Time, sources tell me that 18 IL-76 aircraft, loaded with Russian paratroopers, are in the air, heading for Kiev.  It is believed they will be air-dropped to take the city by force tonight.

It is also conveyed to me that Russia does NOT want, or intend - to "occupy" Ukraine, but rather to decapitate the Ukrainian government, arrest government officials including the entire Parliament, then possibly re-install former President Viktor Yanukovich, who was ousted in a US and EU-backed coup in 2014, until Ukraine can have normal elections to choose a new government.

Defense Department sources tell me this morning "We haven't seen a conventional move like this, nation-state to nation-state, since since World War II; certainly nothing of this size, scope, and scale."

Ukraine President Zelensky is doing everything he can to guilt-trip, scare, or outright intimidate, other European leaders/countries to come to Ukraine's defense.  Zelensky is telling anyone who will listen that he "does not know how much longer Ukraine will exist."

Meanwhile, US illegitimate President Biden is outlining the harshest economic sanctions against Russia for what Biden calls an "unprovoked and unjustified attack upon Ukraine."  Biden totally omits the fact that the attack was provoked, by the USA and by the EU, which began this sordid tale back in 2013 into 2014, when it fomented riots, incited and financed the forcible overthrow of Ukraine's then-President, Viktor Yanukovich, and installed a west-friendly puppet government in Ukraine.

Of course, all this trouble in Ukraine, which began under the Obama-Biden regime, came to an abrupt halt when Donald Trump won the Presidency in 2016.   Throughout Trump's presidency, all remained mostly quiet in Ukraine.   But the peace was short-lived.

After the Democrat Party and RINO Republicans in the USA, conspired to steal the November 2020 election, and then did, in fact, steal it, Dementia-addled Joe Biden illegitimately entered the US Presidency, and like magic, all the troubles in Ukraine started all over again.

The British government bears much of the blame for the events of the past day.  It was the British Ambassador to Ukraine, Melinda Simmons, who first re-lit the troubles, by publicly tweeting:

7 years ago, Russia held a sham “referendum” in an attempt to legitimise its illegal control of the peninsula. The UK will never recognise this blatant disregard for #Ukraine and international norms. Our message remains clear: Russia must return Crimea to Ukraine #CrimeaIsUkraine

This marked the re-lighting of the fire which is now enveloping Ukraine.  It was a public shot-across-the-bow of Russia, letting everyone know the games in Ukraine were afoot once again.

The secession of Crimea from Ukraine back to Russia was voted upon by the population of Crimea.  It was an open, public, referendum which passed with over 85% support.  Crimea left because the people there saw that the EU and the USA had overthrown the Kiev government and the people of Crimea wanted no part of that phony government.

When the people in eastern states of Luhansk and Donetsk saw Crimea leave, they voted to leave Ukraine, too.   It was at that time, the government in Kiev sent the Ukraine army to attack both states, and force them to remain in Ukraine.  The fighting commenced from then.  So this whole situation has been brewing and festering since the 2014 coup which ousted Yanukovich.  In that time, over 14,000 people in Luhansk and Donetsk have been KILLED in the fighting.

The fighting stopped during the Trump Presidency, but resumed almost immediately upon Biden taking office.  In fact, it wasn't even 60 DAYS into Biden's illegitimate Presidency, that Ambassador Melinda Simmons sent the tweet above - starting the troubles all over again.

Not smart enough to leave well-enough alone, British Prime Minister Boris Johnson, is now pushing hard to throw Russia out of the global financial system SWIFT.   Johnson already knows that if this takes place, Russia has said they will view it as an Act of War and will immediately go too war.  Yet Johnson is out there TODAY, pushing for this very action.

German chancellor Olaf Scholz warned Boris Johnson that Germany would not support kicking Russia out of SWIFT, and neither would the EU.

In any event, the British House of Commons is working on the following "Sanctions:"

This is a developing story, check back for updates.

UPDATE 12:34 PM EST -- US officials ARE NOW SAYING they expect that "a new Ukrainian leadership will be appointed within a week." The US believes that Kiev will fall in the next 96 hours.

12:38 PM EST -- State Dept. tells Americans in Ukraine that they are on their own. Biden leaves everyone behind.

12:39 PM EST -- Ukraine’s navy: The Zmeiniy Island base is destroyed by Russian warships

The price of gas in Europe increased by 57% in a day, reaching $1,690 per a thousand cubic meters:

12:53 PM EST -- Russian Defense Ministry says, as a result of Russian strikes, 83 ground objects of the military infrastructure of Ukraine were disabled, two Ukrainian Su-27s, two Su-24s, one helicopter and four Bayraktar TB-2 drones were shot down. "We have achieved all the military goals planned for today."

Biden has been presented with options for massive, unprecedented cyberattacks against Russia . . .

Among the options: Disrupting internet connectivity across Russia, shutting off electric power, and tampering with railroad switches to hamper Russia’s ability to re-supply its forces . . .

(HT REMARK: If anyone did this to the US, we would rightly call it "an Act of War."  IN FACT . . . this coming from the Government that LONG ago declared that cyber attacks would be among the infrastructure attacks considered to be acts of war? And even a year ago that same US government was still talking about using limited nuclear options in retaliation for a cyber attack on the US?

So what they're saying is that Russia performing this limited strike in a non-NATO territory on their border makes it ok for the US to declare war on Russia, clearly and unambiguously.  Are these people nuts?) 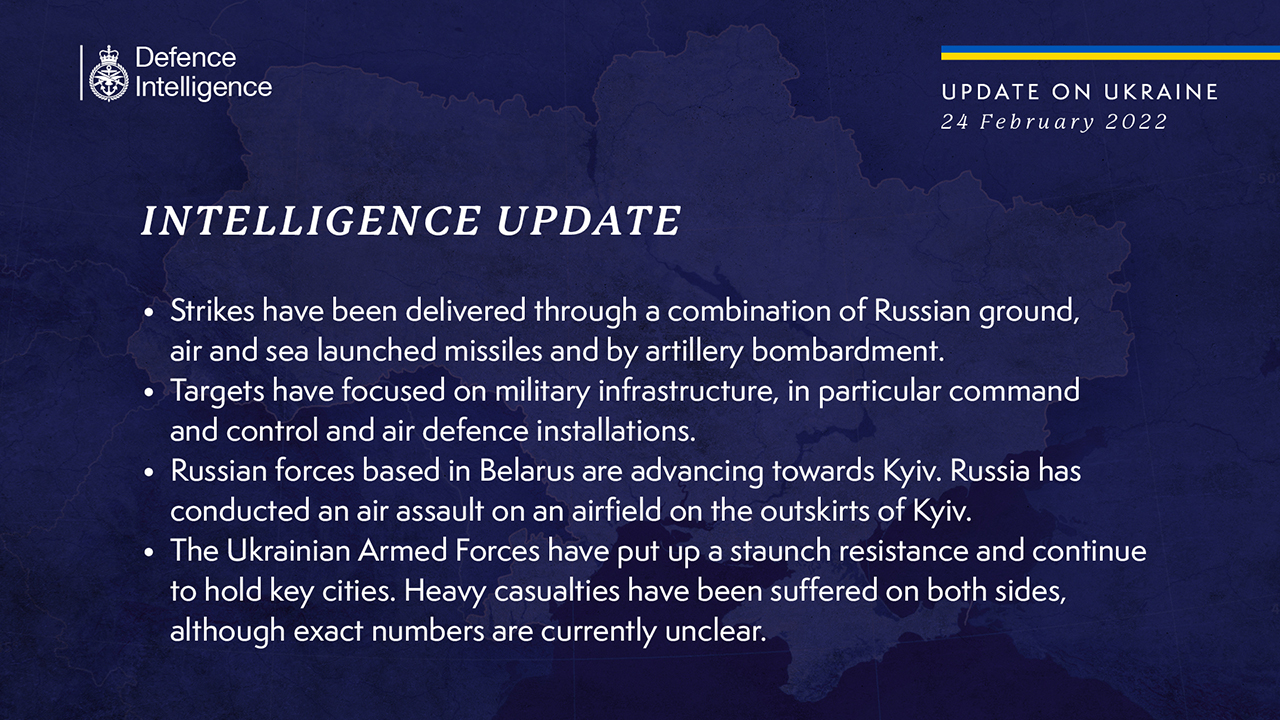 1:40 PM EST -- Moscow is willing to negotiate terms of surrender with kyiv, Kremlin Press Secretary Dmitry Peskov. In exchange Ukraine would: a guarantee of neutral status and the promise of no weapons on its territory.

"THERE IS COMPLETE RUPTURE IN U.S.- RUSSIA RELATIONS"

NATO will defend all its members (i.e. Baltic states)

List of Reporters to allow scripted questions to prop him up.

(HT REMARK: Ever see the episode of Star Trek (Patterns of Force) where the leader of the Nazis is a drugged figurehead? Seems relevant...)

2:15 PM EST - PENTAGON ORDERS ADDITIONAL DEPLOYMENT OF ABOUT 7,000 TO EUROPE

Kyiv Independent now saying the Hostomel airport near the capital, lost to the Russians earlier today, has now been reclaimed by Ukrainian troops

The Ukrainian city of Mariupol is under heavy fire with reports of hundreds of explosions. The city is one of the biggest Ukrainian ports on the Azov Sea.

US sanctions 24 Belarusians and organizations over support of invasion

Communications in Ukraine still appear operational - "not clear exactly why" #Russia has not deployed full scope of its electronic warfare capabilities, per a senior US defense official

Germany, Italy, Hungary and Cyprus are blocking a decision to disconnect Russia from the SWIFT network.

Zelenky's Own Mouth Caused it all!

Russia says the final straw was President Zelensky’s declaration of intent to restore Ukraine as a nuclear power. This, they say, sealed the invasion.

SIDE NOTE: Unusual Russian Navy Concentration Seen In Eastern Mediterranean.   Literally the whole Russian Navy in Med (that we know of) sailed to Syria this morning, while invasion of Ukraine was unfolding. Two SLAVA class cruisers, DDGs, FFGs, 2 Submarines

Reports from Ukrainian defense officials that a Russian bombing raid will hit Kyiv at 3AM.

Ukrainian President Zelensky: 137 Ukrainians killed and 306 wounded as a result of Russian invasion so far.

Zelensky: "We were left alone. No one wants to fight for us. They don't want to take us into NATO, they are afraid to give security guarantees"

Ukrainian Parliament asks civilians to turn off the lights in their homes, curtain windows, and extinguish street lighting of their homes. "So that residential buildings will become invisible to the enemy in the dark"

US Dept of Homeland Security issues statement saying Biden has named the agency "as the lead Federal agency to coordinate domestic preparedness and response efforts related to the current Russia-Ukraine crisis." 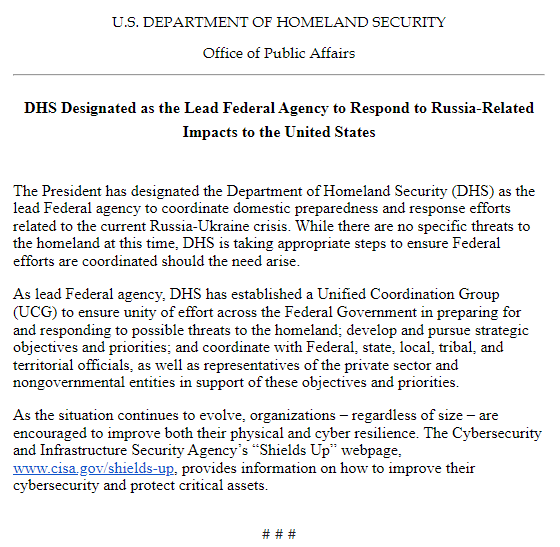 Those of you who cannot or will not use online financial transactions, can mail cash, check or money order to:
Harold Turner
Post Office Box 421
North Bergen, NJ 07047
USA