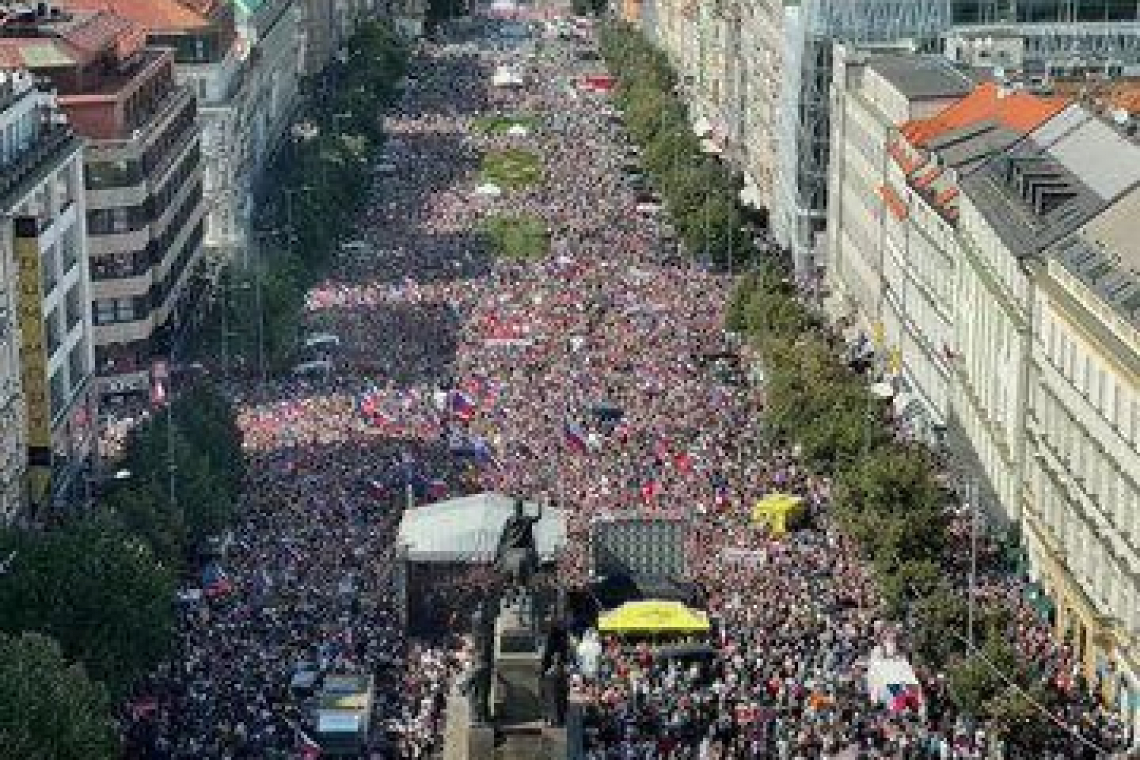 More than seventy-thousand citizens in the Czech Republic marched on their Capital in Prague Saturday, demanding an end to Russian Sanctions (so their gas prices fall to normal), and official declaration of Neutrality over the Ukraine situation, or the government's resignation!

The crowds were *VERY* large, and quite peaceful . . . this time.

They waved Czech Republic flags, but interestingly, NOT ONE flag of the European Union (EU) could be seen anywhere in the massive crowd.

The people understand that the so-called "economic sanctions" imposed by the European Union against Russia (over the Ukraine Special Military Operation) have back-fired massively. Those Sanctions are only harming the people in countries that imposed them.

Russia is not being harmed.  In fact, Russia is selling more natural gas and oil -- and earning even larger profits -- since the Sanctions were imposed.

More than half the world will not honor the Sanctions imposed by the EU . . . or the USA.

They need Russian natural gas, and oil, and THEY are getting it.  Cheap.

So while more than half the planet is enjoying cheap and plentiful energy from Russia, it is only Europe and America that are drowning under the weight of high gasoline and electricity costs.   It is a self-imposed financial horror because the US and the EU will not stop interfering with what Russia is doing in Ukraine.

The people in the Czech Republic see this, and they have now taken to the streets to tell their government: Knock this off or get out.

In fact, they have given the government an Ultimatum:  Have this done by September 25 or citizens will begin using "coercive" action and Strikes

BREAKING: Massive demonstration in Prague in the Czech Republic against the government, soaring prices and the energy crisis.

And we are NOT doomed. The "elite" are NOT going to take over the world. There is not going to be a New World Order. The world is NOT coming to an end.

We ARE facing hard times. But we WILL come trough it just as people have ALWAYS done.

Those who choose to be winnowed out will not be missed.

+5 # Czech’s Love their country — 389rivka@gmail.com 2022-09-04 14:04
Their leadership…not so much. Here we see them peacefully demonstrating against the irrational position their leaders have forced on them. Pray the leaders heed the warnings and avoid civil unrest.

It seems here in ‘merica we have been cowered into submission by the govt response to the J6 event. With peaceful protest off the table…what do we have left??? Total submission or all-out chaos?
If you are a person of prayer…now is a good time to “ take a knee”, seek His face.
+3 # RE: 70,000 Czechs rally in Prague; Want Russian Sanctions Removed, Neutrality over Ukraine Fighting — Eddamnit 2022-09-04 13:11
It's about damn time!
-9 # Czech Women — King Goro 2022-09-04 11:47
Czech women are among the hottest in the world. I employ many of them at my slap and tickle operation.
-5 # where — rugerwild 2022-09-04 13:09
i would like to become a customer
Refresh comments list
RSS feed for comments to this post
JComments
by sur.ly
100% Trusted Informational Platform Website 2021