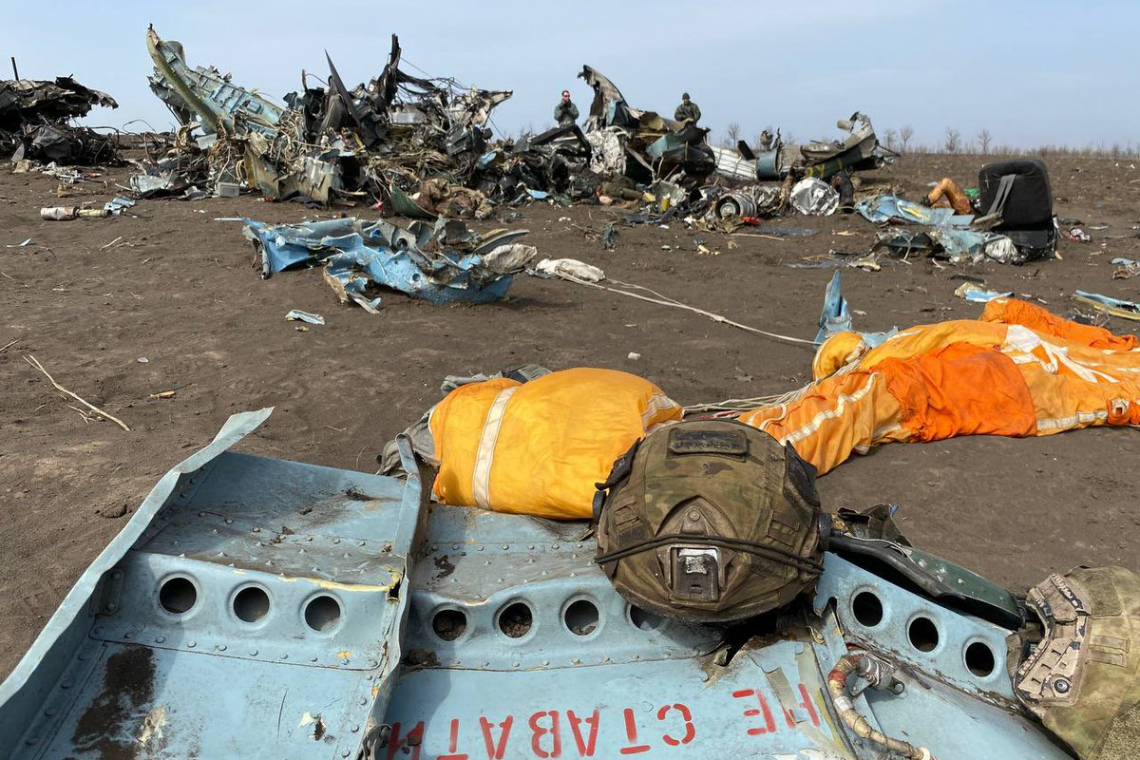 At present, whatever remains of Ukrainian Army AZOV Regiment (the Actual NAZI Regiment) is holed-up inside the vast Azovstal Industrial Area  in Mariupol, Ukraine. The group totaling 20 — of US and UK military advisors as well as several Ukrainian SBU (secret police) advisors—is holed up, together with Azov fighters.

-1 # NEW DIGITAL MONEY SYSTEM — Dolph 2022-04-01 13:22
To fully understand what the socialist Biden Regime is doing, this report continues, all one needed to do yesterday was listen to US Energy Secretary Jennifer Granholm, who openly declared that the Biden Regime is using the conflict in Ukraine to shove down the American peoples throat their socialist so-called clean energy programme—and for the grim future being planned for these unsuspecting Americans, yesterday it saw Socialist Leader Biden’s representative to the World Government Summit in Doha, economist Dr. Pippa Malmgren, beyond shockingly revealing: “We are on the brink of a dramatic change where we are about to, and I’ll say this boldly, we are about to abandon the traditional system of money and accounting and introduce a new one…And the new one; the new accounting is what we call blockchain… It means digital, it means having an almost perfect record of every single transaction that happens in the economy, which will give us far greater clarity over what’s going on”.
https://www.whatdoesitmean.com/index3876.htm
+4 # REMINDS ME OF JUNE 1941 — Dolph 2022-04-01 00:46
France had been defeated in 6 weeks and Russia and Germany had split Poland in September of 1939. Then a year and a half went by and people were calling it a phoney war. Then, Germany surprised the heck out of everyone and attacked the Russians who had prepared for an OFFENSIVE operation against Europe and weren't prepared for the German attack that almost won the war. We just had our phoney war and now the sh-t is about to hit the fan.
+5 # Well, One Good Thing.. — Forrest Mosby 2022-03-31 23:50
They’ve been vaccinated to their eyeballs or they wouldnt still be on duty in Brandons Army so they are safe from Covid, anyway…
Silver Lining and all that..
+3 # No Safety from Heart Attacks — Shropshire Lad 2022-04-01 01:08
The more healthy people are vaccinated with the Pfizer and Moderna "kill shots", the more likely they are to suffer blood clotting and heart attacks.
+1 # I was — Forrest Mosby 2022-04-01 08:17
Being sarcastic but you are 100% dead on
+2 # Cordon and search — Eddamnit 2022-03-31 23:13
Russia's next wave is coming, they will cordon and search the city, a big ugly job with lots of casualties.
The Mercenaries know that Russia will show them little mercy so they will die doing what they love.
+9 # Biden's Poland Speeches — Pierre Derelicto 2022-03-31 22:50
This sheds light on last weekend's "speeches" ... just another case of the Bozo Emperor spilling the beans.

This money will be linked to everyone’s personal digital identity. The digital ID marks the other pillar of the new digital economy that they haven’t really told you about yet. But if you read their documents at the World Economic Forum, you know it’s coming.

hat system is at the door. And once it’s here, it marks the beginning of the end because nobody will be allowed to buy or sell without becoming a digitized, hybrid human being. I believe it will be possible for us to live outside this system for a while, but we need a plan, a network. We will need to live in community with like-minded refusniks.

They’ve told us that severe food shortages are coming.
They’ve told us that they are working on a new digital currency (see Biden’s March 9 executive order).
They’ve told us a major cyber attack is coming that will target our banking and financial system (providing the pretext for the new digital money system).
+5 # americaldoc — Kevin Mills 2022-03-31 20:09
The switch can and probably will be done with cyber attack on the financial institutions....presto , bango....your in or you are OUT.
+1 # americaldoc — Kevin Mills 2022-03-31 19:54
Yep, I heard that from a caller last night on the show.
Also here is a follow -up

https://leohohmann.com/2022/03/31/bombshell-video-economist-at-world-government-summit-says-new-financial-world-order-about-to-shift-in-dramatic-new-direction/
+3 # americaldoc — Kevin Mills 2022-03-31 20:12
Here we go again...posted this a few minutes ago and bang the thumbs down is there...this ass would make a buzzard look like a beginner
-9 # There is logic in all of this, you see! — Haarnaś 2022-03-31 19:29
This is the way it works. In their infinite hubris and wisdom, NATO had decided that only other NAZIs are bad. Their own Nazis, GOOD!

In fact, during WWII Ukrainian Nazis (Waffen-division SS-Galicia) were used by Wehrmacht and SS to do the most bloodthirsty jobs that Germans did not want to take the blame,

The optics of this looks bad for NATO and is totally unnecessary. Putin will have a big propaganda win that he will use to confuse more people on the forum here and in Europe that he is going to liberate them from globalists! He is going to do no such thing!

Orthodox Ukrainian Bishop blessing the hohol Nazis in his cathedral Orthodox church on their way a thorough ethnic cleansing among Hungarian, Polish and Romanian villages and towns in Ukraine for the Germans!

Overnight, Ukraine sent two military helicopters to Mariupol to try to rescue the trapped US, UK, and Ukrainian Secret Police persons. Both those helicopters landed without incident, but when they took off, both were SHOT DOWN.

This just shows you how much the Russians think things through.

Why go through all the trouble of ferreting them out when they would be putting themselves all together into one easy target?

One of the Mi-8 helicopters was shot down by . . . . . . . An American STINGER anti-aircraft, man-launched missile, supplied to Ukraine by the United States and later captured from the Ukrainian forces by Russian forces.

And the Russian forces even went so far as to mock the NATO effort to destabilize their military action by sending a message with one of the captured weapons.

From the helicopter that crashed into the earth, COVERT INTEL SOURCES now tell me, the bodies of two French Intelligence operatives, allegedly with DGSE credentials, were also said to have been recovered.

The DGSE is the French General Directorate for Exterior Security.

This time the FUKUS alliance got caught with their pants down.
+4 # True — Pierre Derelicto 2022-03-31 22:56
With them all holed out in one location, it would have made an ideal hypersonic missile target, as well. Had Russia gone that route, though, they would not have been able to expose France, the US and UK.
+18 # The Laundromat is closed — Kali K 2022-03-31 18:53
Another layer to this onion is that Russia could find proof positive that Ukraine is simply the laundromat for the west's dirty money. Our 'government' people can't have THAT.
+3 # They already have it ... — Pierre Derelicto 2022-03-31 22:59
I guarantee Russia has the same dirt that was presented to Rudy Giuliani, back in 2017.
+5 # This is getting bad — Rush 2022-03-31 18:44
My view is - -
Very bad, for lots of folks.
+14 # If advisor is caught alive… — Jack Box 2022-03-31 18:40
It will be a Francis Gary Powers show trial in Moscow all over again. The media will eat it up and Putin also wins the propaganda war, to the embarrassment of NATO.
+9 # Nope — Burnit 2022-03-31 19:07
It won't get reported. Maybe Dailymail
Maybe.
+4 # Well, As Gen MacArthur — Forrest Mosby 2022-03-31 18:03
Told his troops at Corregidor…….Bye
+9 # This Situation is Bad — Doug Brown 2022-03-31 17:53
This situation is looking nasty.
It has the possibility of exploding.
America can't just let its almighty dollar be
eviscerated by a snake-in-the-grass Russia.
This is the ultimate put-down, the ultimate
humiliation, to be outwitted by Russia.
To crash the US Dollar is an indignity few
can bear.
How can there be any other response
than War. Seriously.
Russia sees Biden's sanctions as an act of
war against Russia.
How can the destruction of the USDollar not
be seen as exactly the same thing,
but from an American perspective?
+4 # YOU DON'T GET IT, DOUG — Dolph 2022-04-01 01:16
We are the bad guys, Babylon. "All mighty dollar" ? You might be right. Americans do worship the dollar. We are not the same counrty we once were. Take it from an eighty year old guy. The anti-Christ elites have engineered our population allowing in the most undesirables. Snake in the grass Russians?? Are you listening to Hal? We have been screwing Russia for years just to support the military-industrial complex. We could've had world peace after the Soviet Union collapsed. We deserve to get our come uppence by voting in liberals, Planned Parenthood, etc.You and I know who runs the MSM, Wall Street, the Federal Reserve and Hollywood. God knows the score and believe me He's not on our side. Judgment is here and we deserve our share.
-5 # wtf? — Dudimus Maximus 2022-03-31 19:24
Quoting Doug Brown:

America can't just let its almighty dollar be
eviscerated by a snake-in-the-grass Russia.

It's a fresh tweet. So is it new info? Or is it a regurgitation of the same urging about a month ago? I report, you decide.
+15 # Peace! Peace! — Gulfcaptain 2022-03-31 17:40
Typical of the West, they cry "peace and resolution now!" all the while supplying guns, bombs, stingers and drones into the fight to keep it going. What hypocrites. Like Hal says, at some point, Russia is going to come to the conclusion that these countries that are supplying lethal weapons and "advisors" (mercenaries) are fair game if they don't stop. Capturing these fools inside that building then parading them around would def. be a US/NATO PR nightmare. My guess is that Russia will not bomb the building but try to capture them alive. If not, go in and shoot them in order to then identify the persons. A bomb might destroy the bodies beyond recognition.
+12 # TRAPPED BY RUSSIAN FORCES — Palehorse 2022-03-31 17:33
|

Oh...the irony of being shot down by your own Stinger missile! Maybe worth capturing these "advisors " to get more information from them, before sending them upstairs.

I'd take the "Stinger missile" part with a grain of salt, given the situation on the ground.

The Soviets/Russians had an assortment of similarly sized man-portable surface to air missiles (Strella/Grouse/Gimlet/Grinch). They'd have plenty of their own with which they're familiar.

Anybody stupid enough to pick one up, much less attempt to fire it, is begging to be killed by a booby-trapped "war trophy".