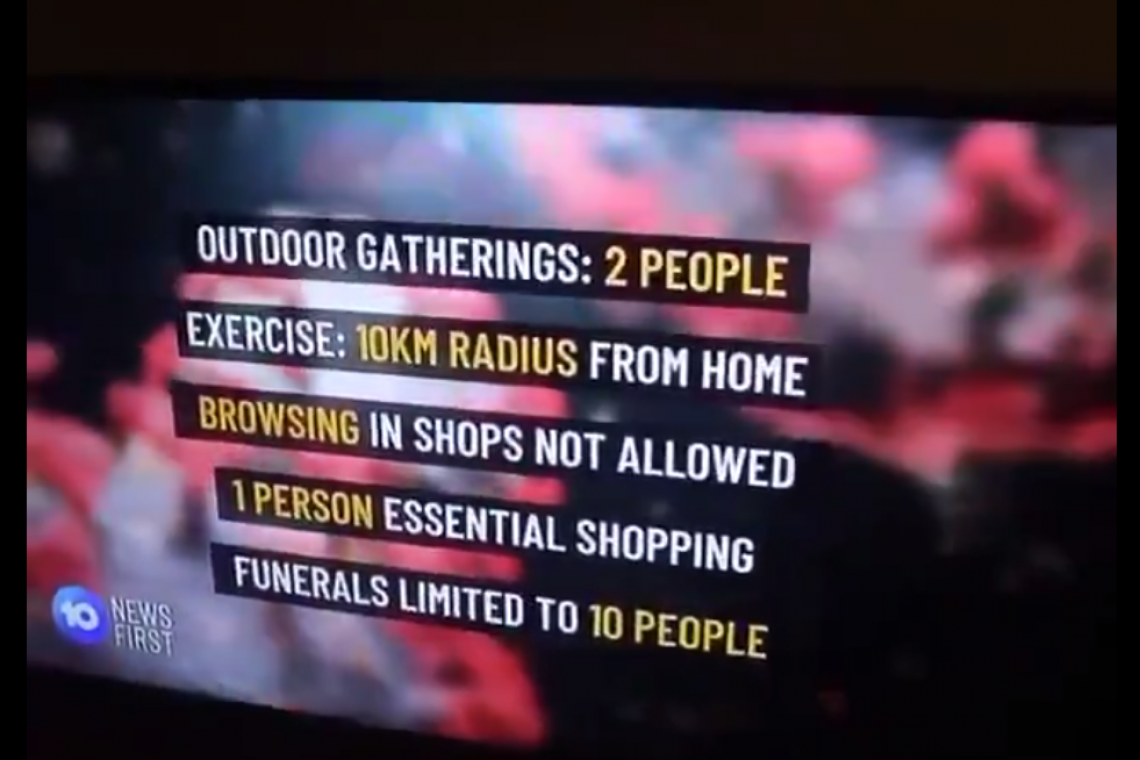 Reporter Steve Hart from the New South Wales TV Station "10 News First" reported to Australian viewers that "Today is the first full day of the New World Order" as he dutifully reported the draconian lockdowns and loss of freedom of a once proud and free citizenry.

Giving details about the new lockdowns, for the criminal scheme to defraud known as "COVID-19" Reporter Hart, like a good little Commie statist drone, outlined:

Exercise: Within 10km of home

One (1) Person per household, per day may engage in Essential Shopping (Food and supplies)

Here, watch the broadcast for yourself:

Australia is able to do this nonsense to its citizens because it scammed those citizens out of weapons several years ago, with emotion-driven appeals after a single nutcase gunned down some people.  The masses never bothered to realize that once they were disarmed, their own government would do things like this.  Yet, here it is.

This is what happens to people who give up their God-given right to own weapons for self-defense.

It is also what happens when people fail to pay attention to actual facts, and instead drink the Kool-Aid of government propaganda about a disease that has a 99.8% survival rate.

The whole thing is a deliberate SCAM, perpetrated by power-crazed maniacs, to steal people's freedom through propaganda by HYPING a disease which is no more deadly than a nasty flu season.

Australians need to rise-up against this or it will never end.

A Personal Note to Readers from Hal Turner:  Many of you have been coming here for awhile, referred by other sites or trusted friends, to read the breaking news and Covert Intel routinely provided by this site. Very frequently, this site leads by hours or even days before mass-media covers a story.  It would be a tremendous help to this site, if we could rely on you for ONE DOLLAR per week in support.   It's such a trivial amount, you won't even miss it; but it means the world to our existence.   Please subscribe to this site for a buck a week, billed quarterly ($13) so this site can have stable revenue and continue bringing you news that actually matters. You'll also get access to hundreds of other stories, an uncensored, free speech, Reader Comments area beneath every story, that can't even be SEEN by the general public, and even be able to hear all the archives of the Hal Turner Radio Show at your leisure! SUBSCRIBE HERE