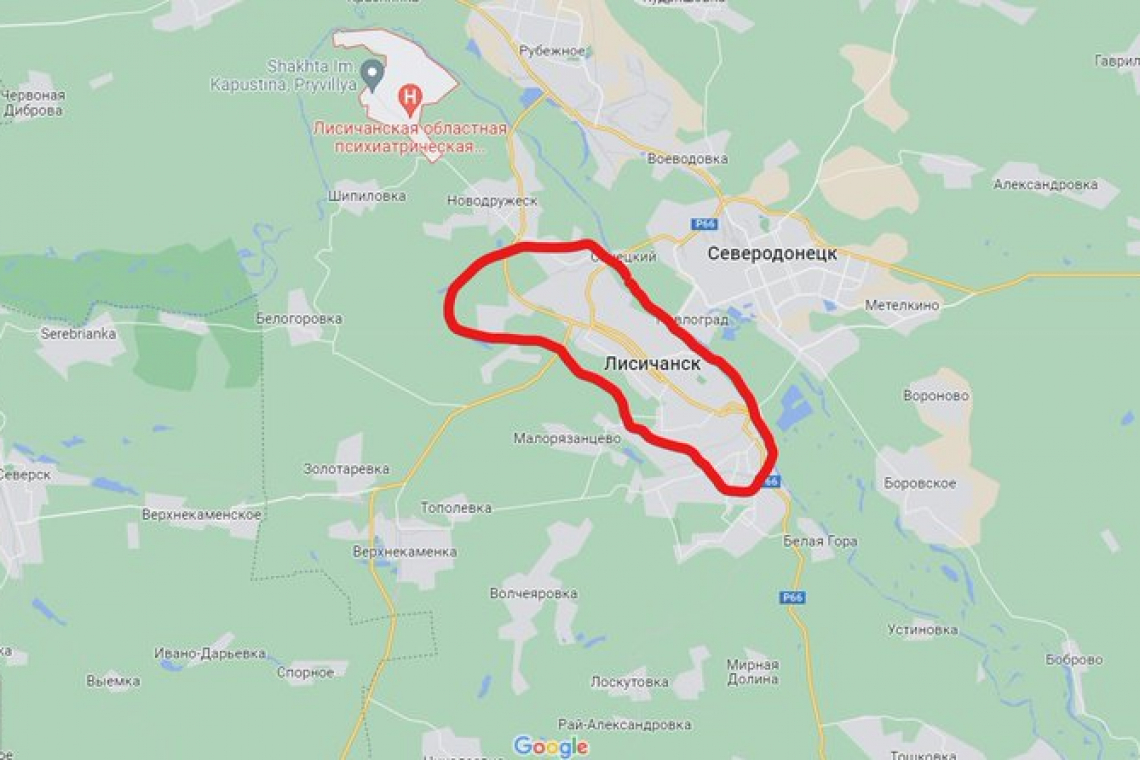 Less than one week after conquering Severodonetsk, the Russian Army now has Lisichansk completely surrounded.

Several thousand Ukrainian troops are now trapped in a Cauldron into which no reinforcements or supplies can go.

The Russians are likely to give them all a chance to surrender, but that is not expected to go well.  This weekend, all of those Ukraine troops will likely be killed.

It's like this everywhere the Russians go in Ukraine.  They surround the target, offer surrender, and those who fail to lay down their arms, are killed.

NATO weapons are not making any difference at all.

Ukraine is losing the war and losing very badly.  In fact, I believe Ukraine has no chance at all.

I said this on my radio show countless times since the hostilities began on February 24.

I have repeatedly made clear that Ukraine lost the moment Russian troops crossed the border into their country.   It was over then.  Only the politicians and "woke" generals couldn't see it.

The Russian Army is an almost unstoppable force.

Ukraine should surrender or at least SEEK peace.

The trouble is, Ukraine's word is no good.   They enter into agreements like they did in Minsk, with zero intention of carrying out what they agree to.  Even their former President, Poroshenko, admitted the entire Minsk Agreement deal was just to buy time for Ukraine to train and better equip their army.  It was a complete farce from gitgo.

So Ukraine cannot be trusted.  At all.

How many thousands of Ukrainian troops will be sent to the slaughter because their so-called "Leaders' refuse to surrender?

I believe one of the reasons many Americans carry such negative feelings about the Russians is our collective failure to understand the price Russians paid to defeat Hitler. The sad truth is that most Americans have trouble identifying the warring parties in World War II and generally believe that terrible conflict was settled because of what America did….

So let me share with you some surprising facts. What were the five bloodiest campaign battles in World War II that cost the United States the most fatalities?

Here are the top five Russian campaigns. They only fought the Germans. But the price in blood is staggering:

Let me state the difference in another way. Total U.S. killed in action in World War II in both the European, North African and Pacific Theaters totaled 472,000. The Russians lost more troops in four separate battles than the United States lost in the entire war.”

The Russian people did not fight because Stalin had a gun pointed at their back. They rallied in a remarkable way against the Nazi invasion. Most military analysts at the time predicted the Soviet Union would collapse under the weight of the Nazi steamroller. The Russian people defied those expectations and rallied to defeat the best of the German armies.

The horrific death toll touched almost every family in Russia. That is why the Russians still remember and commemorate that sacrifice every May. It has nothing to do with communism. World War II scarred the Russians to the bone. That is the primary reason that Vladimir Putin enjoys widespread public support in taking on the threat from Ukraine. Ukraine has been a de facto NATO ally since 2014.

The United States and NATO are grossly mistaken if they believe that flexing military muscle by deploying troops on Russia’s borders will cow the Russian people. This perceived threat goes beyond Putin. It is something most Russians see and fear. My hope is that once the American people appreciate the legitimate paranoia of the Russians, they will reject calls to treat Russia as an intractable enemy.