The Connecticut Department of Public Health has published the Ingredients list for the Moderna COVID "Vaccine" and that data sheet confirms it contains a chemical "SM-102."

Here is the information published by the Connecticut Department of Health about the Moderna COVID Vaccine, which lists its INGREDIENTS: 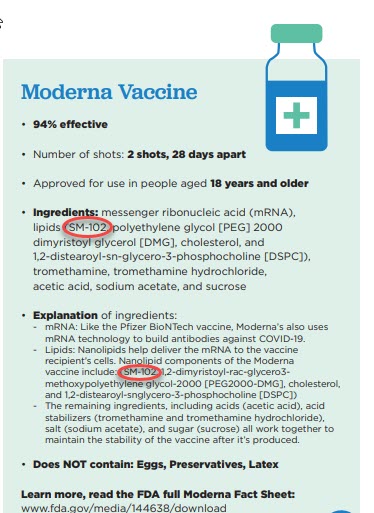 According to the manufacturer, Cayman Chemical Company in their filing with the Occupational Safety and Health Administration (OSHA), this chemical causes "Acute Toxicity "Fatal in contact with skin."

In that same OSHA filing, the manufacturer declares SM-102  "Causes damage to the central nervous system, the kidneys, the liver and the respiratory system through prolonged or repeated exposure."

Here are two sections from the manufacturer's OSHA filing: 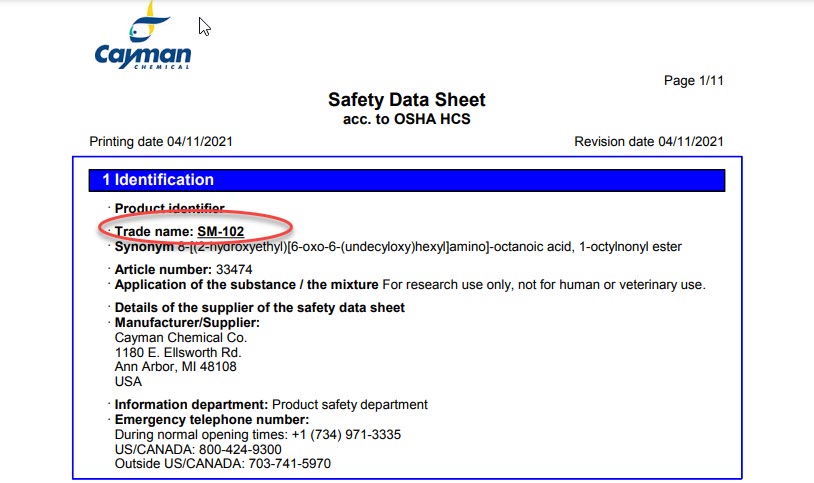 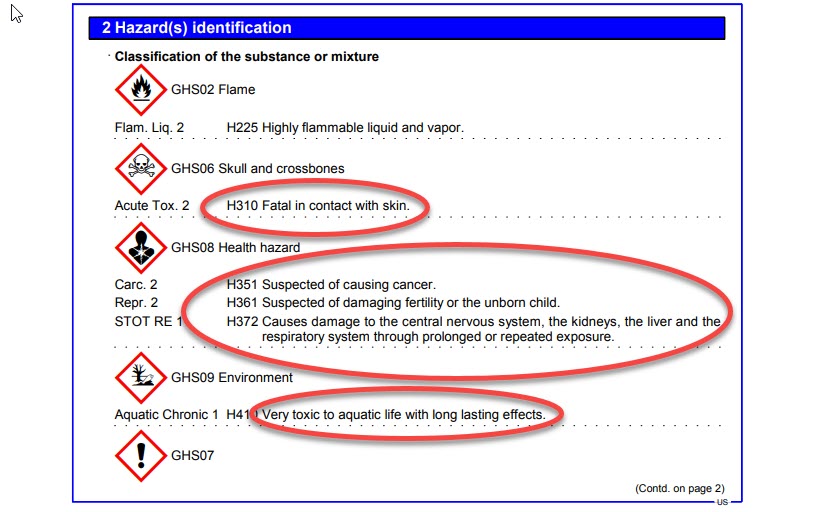 This appears to be what they are injecting into YOUR arm when you take the Moderna COVID Vax.  You are APPARENTLY being POISONED!

Perhaps this is why so many people are having "adverse reactions" to the so-called "vaccine?"

Yet Health departments all over this country are running TV and Radio ads telling the general public this vaccine is "safe."  That seems to be FALSE ADVERTISING.

Now that this information is out, YOU may wish to carefully re-think whether or not you want someone injecting this into YOU.

For those who made the decision to get this vaccine, you may want to get in touch with a good personal injury lawyer and present this information to that attorney.   (While you're still alive.)

I am getting a lot of emails from biochemists telling me that the evil data about SM-102 has to do with the fact that it is delivered via a solution of Chloroform and the hazards listed on the Material Safety Data Sheet (MSDS) deal with Chloroform.  No, they don't.

The MSDS deals with the substance SM-102 as it is manufactured by Cayman Chemical Company.  Period.

The ingredients list in the Moderna COVID 'Vaccine" lists SM-102 as the third most-prevalent ingredient in the vaccine, and that ingredient is as the Cayman Chemical Company describes it.   It's that simple.

But this actually gets worse.

Chloroform is the solution used with the SM-102 and Chloroform has been outlawed for use by consumers for decades.

The reason Chloroform is outlawed for use by consumers has to do with how long it stays in a human body and what it does to a human body while it's inside.  The Half-Life of Chloroform is 180 days.   That means that it takes half a YEAR for only HALF of the chloroform, to be exited out of the body.  You with me so far?

Chloroform, like any other chemical, breaks down.  And when it comes into contact with oxygen, it breaks down into . . . . wait for it . . . . Phosgene Gas.

Phosgene gas is fatal to humans in concentrations as low as seven parts per million (7ppm).

So all these folks getting the "jab" might be getting Chloroform which, as it circulates through their bodies can break down into phosgene gas.

Depending upon the unique functions of various people, some -- maybe many -- of those people MIGHT reach the fatal threshold of phosgene gas in their system, and die from it; likely within 180 days after the second "jab."

But wait, there's even MORE!  Phosgene is a highly toxic substance that exists as a gas at room temperature. Owing to its poor water solubility, one of the hallmarks of phosgene toxicity is an unpredictable asymptomatic latent phase before the development of noncardiogenic pulmonary edema.  Yes, the lungs fill with fluid and the patient can't breathe.  Just like . . . .  wait for it . . . .  "COVID."

Would that be plausible deniability for mass murder?  You decide.

Great way to depopulate the planet and no one is the wiser because the deaths are so chronologically distant from the jab and the symptoms of phosgene gas poisoning mimic the symptoms of COVID.

Clearly very many of you made the decision to receive this vaccine based on deliberately false claims by politicians, celebrities, public health officials,  TV and Radio Stations, the print and electronic NEWS MEDIA (ABC, NBC, CBS, CNN, MSNBC, CNBS, etc.) and perhaps others, that told YOU these vaccines were "safe."

Why were they out there telling people this was "safe" when the ingredients list clearly shows a chemical "not for human ... use" that is known to "cause cancer" and "damage to central nervous system . . ."

Maybe THOSE PEOPLE SHOULD BE SUED for what their false information has done to you. Where was their Due Diligence?  Did they even bother to look up the ingredients before they went out and told the public this was "safe?"

Oh, and how about social media giants (with deep pockets) like Facebook, Twitter, Reddit, Google/Youtube? They not only pushed false information, but also actively and aggressively BLOCKED truthful information about the bad reactions taking place, and CENSORED or SHUT OFF accounts trying to get facts to the public. What price should they pay for what they've done?

Their CENSORSHIP seems to have been an effort to aid and abet the flow of false safety information which ultimately may have damaged YOU!  Maybe the social media companies need to get sued too?

I can't help but feel that if the big mouth, holier-than-thou celebrities, actors, left-wing media pundits, and politicians, all find themselves getting sued for what they've publicly told people to do, maybe these folks will (finally) shut up . . . or go out of business.

How about state Governors?  Guys like New York's Andrew Cuomo and my home state of New Jersey Governor Phil Murphy, or the wretched woman, Gretchen Whitmer, out in Michigan; out there almost every day for MONTHS telling people "Get vaccinated, it's safe."  What should happen with folks like that who pushed this toxic and deadly chemical on residents of entire states?

Those of you who work or attend school at places where the bosses or school administration REQUIRED you to get the vaccine as a condition of continued employment or condition of attending school, maybe THEY SHOULD GET SUED AS WELL.

OSHA has made clear that when an employer REQUIRES people to take an experimental vaccine, the employer is responsible under Workman's Compensation Laws for any injuries or deaths caused by their requirement!

A lot of these people seem to think they're so much smarter than everyone else, and they somehow needed to tell all us "little people" what was best for us.

Let them explain how injecting a cancer-causing chemical clearly labelled NOT FOR HUMAN USE, was "good" for us. Let's see what a jury thinks of that.

Let their vast personal intellect, that they seem to think makes them so much smarter than the rest of us, hit their pocketbook; maybe they'll start minding their own business . . . if they have a business left after all these lawsuits!

Given the information above, it seems to me that people who took the Moderna "jab" are likely to get sicker and sicker until they die.  Maybe I'm wrong.   Yet the Material Safety Data Sheet clearly states "Causes damage to the central nervous system, the kidneys, the liver and the respiratory system through prolonged or repeated exposure"  so to me, that means every time your heart beats and your blood flows, that chemical is REPEATEDLY hitting the cells in your body.  To me, that makes it "prolonged and repeated exposure."

Those of you who are suffering from "the jab" should ask a lawyer.

Of course, proving fraud is a tough legal thing to do.  But maybe this will help; Pharmaceutical Companies are required to put an INSERT into their products that list ingredients and all known side effects.   But as the images below will show, those inserts boxed with the "vaccines" . . . .  ARE BLANK! 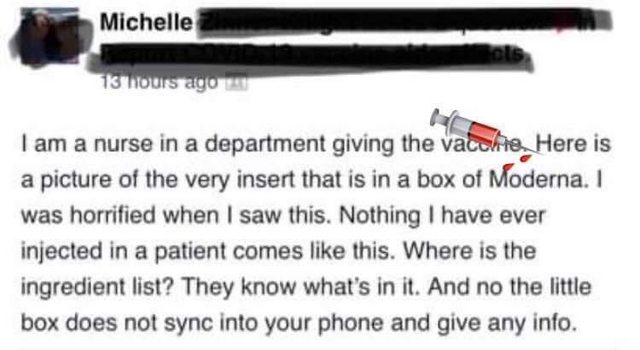 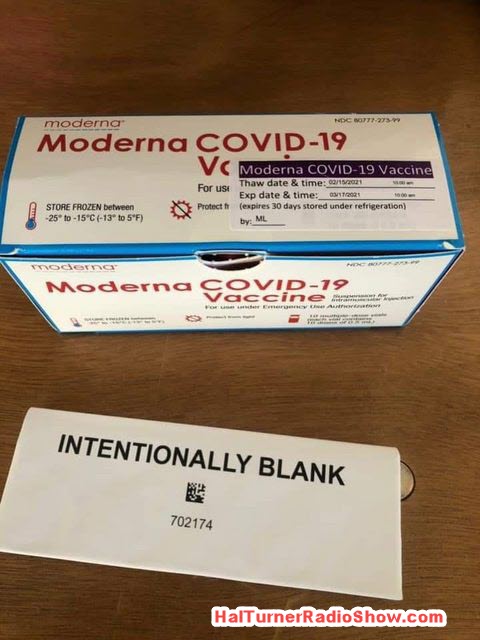 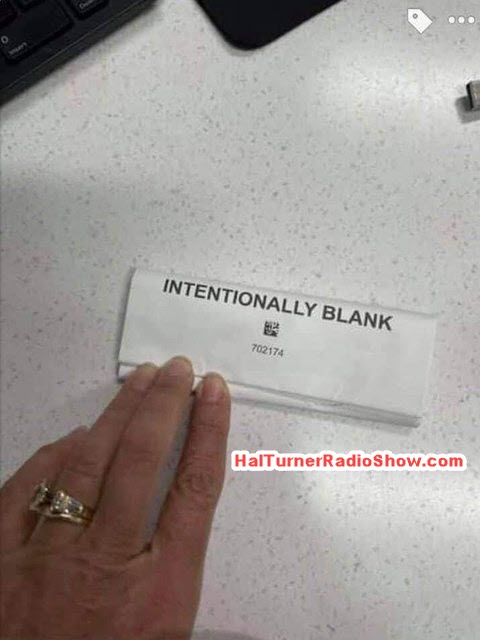 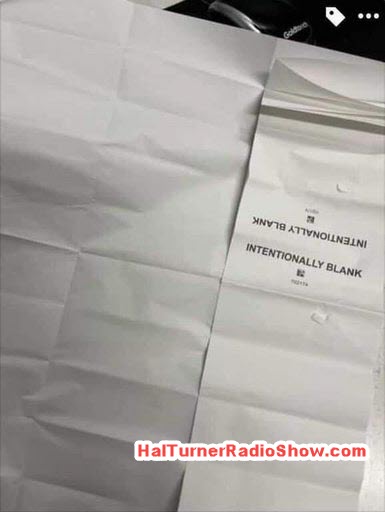 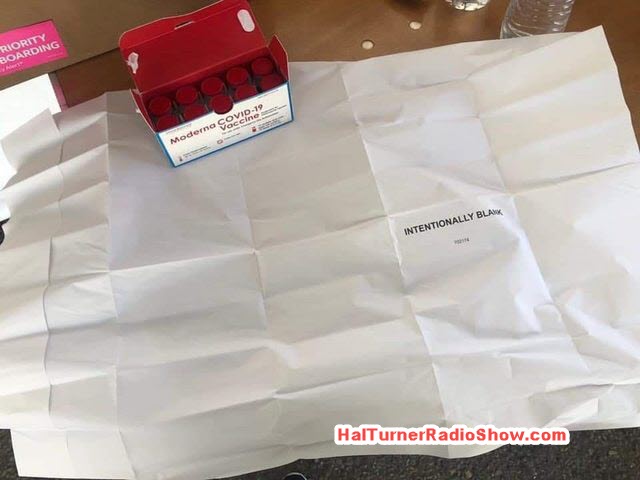 Now, I'm no pharmaceutical expert, so I don't know why the companies left this insert blank.  Someone I know worked for a big pharmaceutical MANUFACTURER,  and he told me that these inserts are called "Ancillary labels" and when he worked in the industry, he was instructed by the company that these are an FDA requirement; they could not ship product without them.

Yet, Moderna (and some others) shipped product with blank inserts.  Why?

Were they worried people would look up the ingredients, find out they're not for human or veterinary use, and go bonkers?  In criminal law, might the decision to use blank inserts be "consciousness of guilt?"  I'm not an attorney, so I don't have the answers.

Those of you who have NOT taken the vaccine, should maybe think an awful lot longer before you do.

The Facebook "Fact-Checker" Leadstories.com was asked by Facebook to do a story about THIS story, and Facebook itself has labeled this article "FALSE" - likely because their company is named as a source which should be sued for what they've been doing concerning the Moderna Vaccine.  It seems natural they would want to discredit the facts cited herein to protect themselves from a lawsuit.

The Leadstories article quotes a Biologist involved with Animal studies on the Moderna vaccine as saying this article uses "the wrong data sheet" from SM-102, but they do NOT provide any alternate data sheet to substantiate their claim.  There does not appear to be ANY other data sheet for any substance identified as SM-102.

Moreover, the biologist they quote failed to disclose that most of the animals studied with the Moderna vaccine . . . DIED from it during the animal testing studies and that so many animals died, they sought, and were granted, a  WAIVER to stop the animal studies and go directly to experimental human use.  Apparently, we humans are now the study creatures for this so-called "vaccine" which may be why over four thousand people have died in the USA after taking the Moderna vaccine.  We stand-by the accuracy of this story.

Now that you have read this story, please COVER THE COST for what your visit cost this site by clicking one or more of the ads below which generates Advertiser revenue of two to three cents per click - no purchase necessary by you -- and helps offset operating costs for this web site.  OR, you can use the DONATE BOX below the ads!