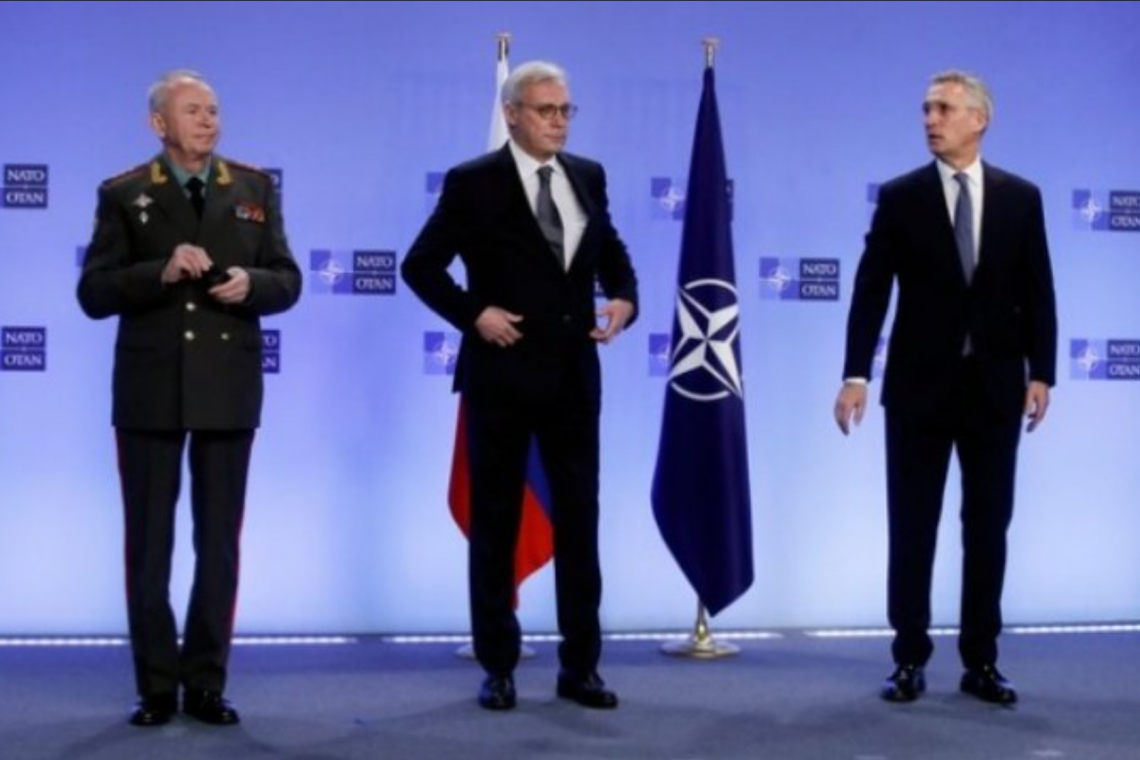 “US-led NATO military bloc has reverted to full Cold War strategy of “containment” towards Russia and seeks “full spectrum dominance” — talks are a fail" according to Russian Foreign Ministry speakers.

Russia made clear before the scheduled meetings that in such an event, it has no choice but to create counter-threats & use "military and military-technical means."

NATO claims they pressed Russia to "prove" they weren't going to invade Ukraine, but got no answer.  Yet the Deputy Foreign Minister of Russia Grushko said that Ukraine was discussed with NATO, the Russian Federation has a clear position: "If Minsk-2 is fulfilled, there will be no threats to the territorial integrity of Ukraine."

Of course this is in reference to the two sets of agreements hammered out in Minsk years ago, of which Ukraine has performed a total of ZERO of the commitments it made in those meetings.   One interesting commitment Ukraine made was to negotiate directly with the leaders of (breakaway) Luhanks and Donetsk.   Ukraine now flatly refuses to talk to those oblasts (states) and wants instead to negotiate with Russia.

Russia says this is a problem within Ukraine and they cannot negotiate for states within Ukraine, so Kiev must talk to their own states; which Kiev refuses to do.

Those two states (oblasts) want to leave Ukraine and join Russia.   Ukraine refuses to allow it, and sent the Ukraine Army to forcibly restrain the two states back in 2014, which is how the whole military buildup on both sides began.

So unless and until Ukraine meets its obligations under the Minsk and Minsk 2 agreements, this situation will never get better.  It will only grow worse.

US Embassy in Kyiv, Ukraine has just issued the following ALERT:  "Concerning reports of further unusual Russian military activity near Ukraine’s borders and in Crimea continue, and US citizens are reminded the security conditions may change with little or no notice."

The US Air Force is now running E-8 Intelligence-gathering aircraft in a track-like surveillance of Russian activities in Crimea and western Russia: 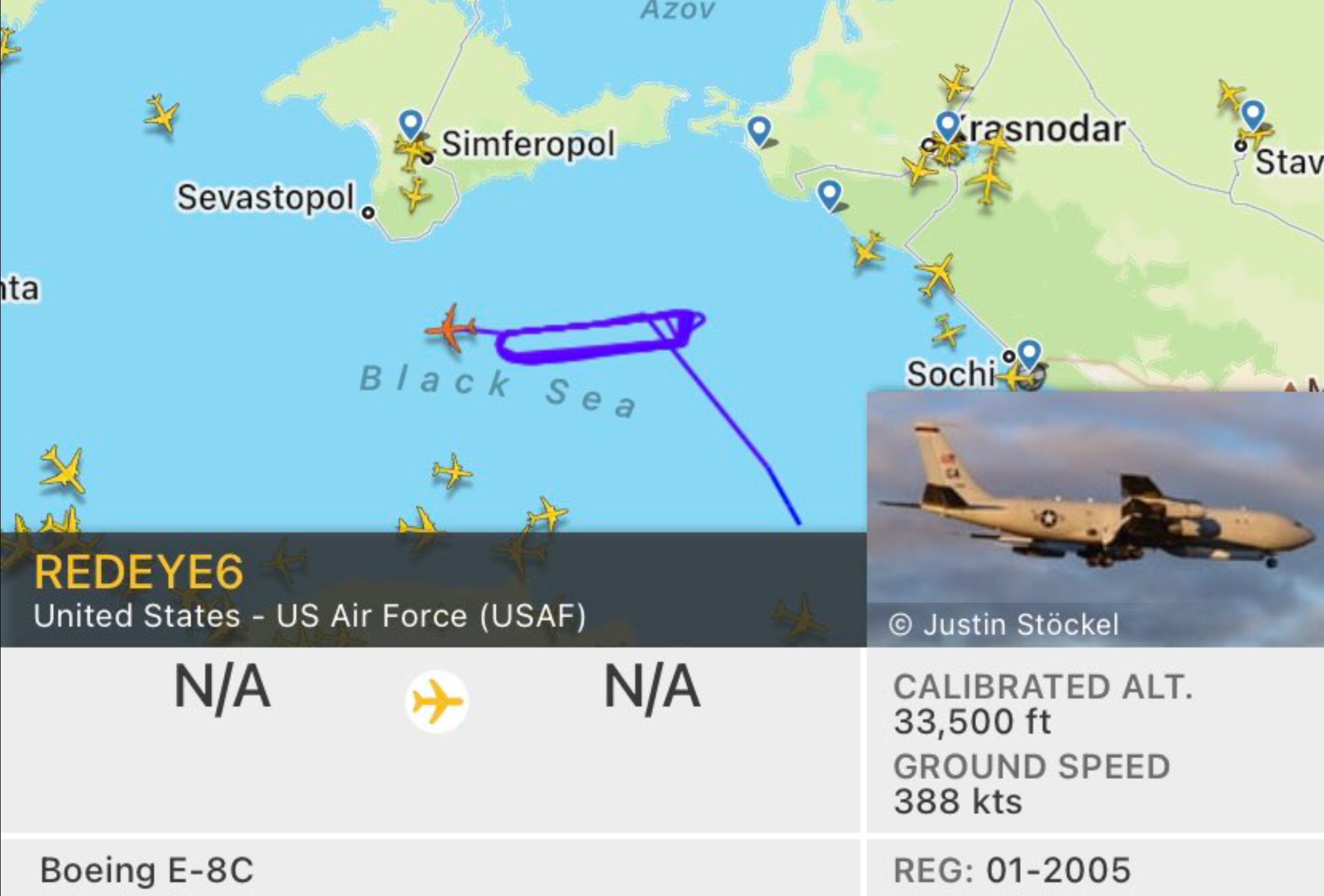 Now seeing ** a LOT ** of Russian military hardware on the move from eastern and central Russia towards the west.   Multiple trainloads of tanks, armored personnel carriers, artillery, and missile launchers.   Emphsis on ** a LOT **

Senior admin officials say the US has finalized sanctions options in the event that Russia invades Ukraine. The Biden administration has sanctions targets and implementation measures “ready to go to be issued when those tanks cross the border,” one official said.

Russia issued an almost immediate response: "The threat of sanctions from an economically and socially bankrupt country do not put fear into Russians."

Russian Deputy FM Grushko: "Russia-NATO relations are at a critically low level. We have made it clear that their further deterioration carries serious risks."

In an unusual and late-issued statement at 11:30 PM Moscow, Russia, time, the Russia Foreign Ministry says "Moscow and NATO do not have a "unifying positive agenda at all," following NATO-Russia talks."

Grushko: Russia put forward its draft treaty and today called on NATO allies to put forward its proposals (in writing). Then it will be clear what sort of negotiation formats are possible going forward.

“I think we managed to convey to the members of the [NATO] Alliance that the situation is becoming intolerable. And that at some point, the risks associated with continuing the same course of NATO may outweigh the advantages," Grushko said.

Based upon my past work with the FBI from 1993-2008, and specifically, my handling of National Security Intelligence, Terrorism, and Foreign Counter-Intelligence for the FBI Joint Terrorism Task Force from 2003-2008, it is my considered judgment that given today's failure of talks, things are about to go Hot.

I have conferred with some of my former colleagues in the Intelligence Community today - some who are still in active service to various countries -- and they agree with my assessment:

Heads up...Russia said it would respond with military and "technical" means.

Be advised...when this kicks off...power grids...internet...banking and communication SEEM LIKELY to all be targets.  Those would be "technical" means.

Get ready...this could happen at any moment now.

ALSO...just a reminder...Russia warned that ANY missile...fired at Russia will be seen as a possible nuke and BEFORE it hits Russia will launch a full-scale nuclear strike at the attacking nation.

1914: On 10 July 1914, Austria-Hungary presented Serbia with an ultimatum containing "unacceptable demands". These included all anti-Austrian propaganda within Serbia be suppressed, and that Austria-Hungary be allowed to conduct its own investigation into the Archduke Franz Ferdinand's killing. Unsurprisingly, the demands are rejected, and war breaks out, escalating into The Great War/World War One.

1939: UK PM, Neville Chamberlain, issued an ultimatum to the Germans on 2 September 1939: withdraw from Poland or ‘a state of war will exist between Great Britain and Germany.’ Later the same day, France issued Germany a similar ultimatum. When the ultimatum was rejected, war started. The Axis and Allied powers begin a war that spreads worldwide, constituting World War Two.

2021: On December 17, Russian President Vladimir Putin, demands that NATO withdraw its bases back to pre-1997 settings, end military exercises in former Soviet states and guarantee that Georgia and Ukraine will never join NATO. Putin masses more than 100,000 troops on the Ukrainian border while Belarus and the CSTO vow to support Russia. The demands are rejected, even though Putin promises "military-technical" retaliation to "protect its national security". Military historians warn that the conflict has the potential to escalate beyond Ukraine and turn into a full-scale war between the CSTO and NATO.

US-Russia Meeting in Geneva Did Not Go Well. State Department Admits they told Russia "Nuclear War must be avoided"

Satellites Would Be Attacked First, Then These Radar Stations if WW3 Commences next week