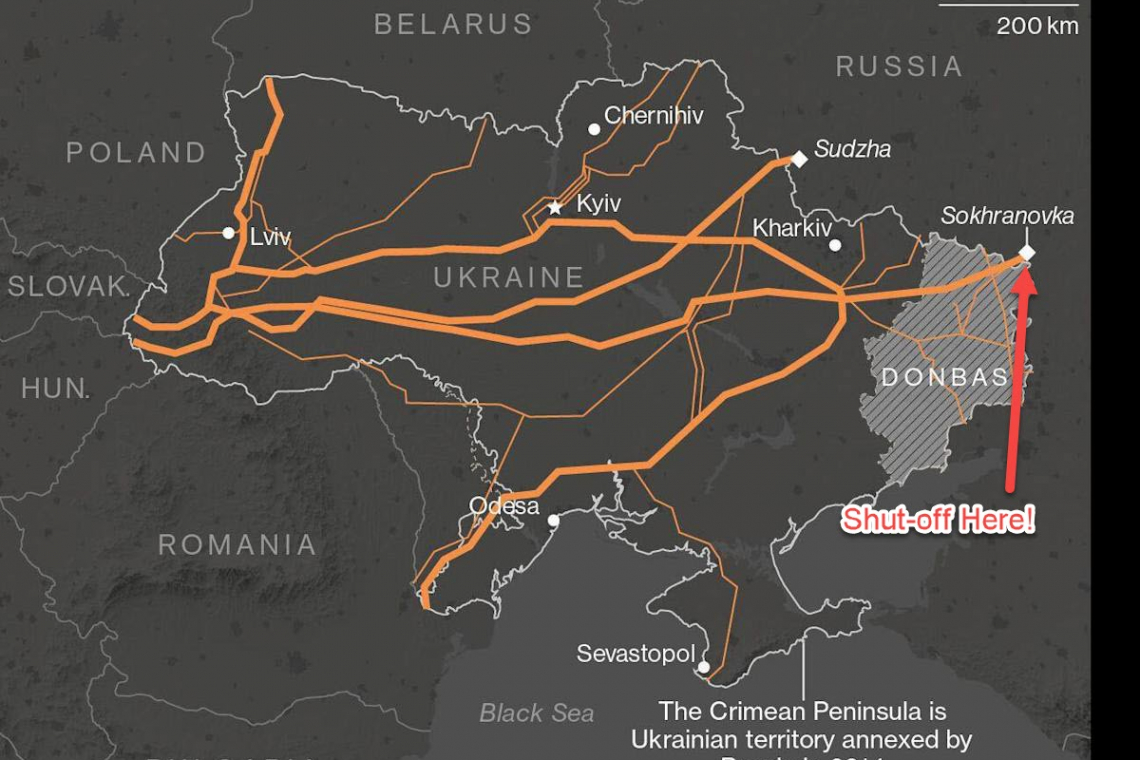 UKRAINE IS SHUTTING OFF THE FLOW OF ALL NATURAL GAS TO EUROPE, claiming a "force majeure" due to the presence of "Russian Occupiers."

Russian gas conglomerate Gazprom has received no confirmation of force majeure or any obstacles to continued transit of gas through a junction in Lugansk Region, the company said on Tuesday, after Ukraine’s operator OGTSU announced it would halt further deliveries starting May 11, due to the presence of “Russian occupiers.”

Gas Transit Services of Ukraine (OGTSU) declared force majeure on Tuesday, saying that it was impossible to continue the transit of gas through a connection point and compressor station located in the Lugansk area. As OGTSU personnel “cannot carry out operational and technological control” over the Sokhranovka connector point and Novopskov compressor station, the company cannot continue to fulfill its contract obligations, it said.

Gas from this connection will not be accepted into the transit system of Ukraine starting at 7 am on Wednesday, OGTSU said. Sokhrankovka accounts for almost a third of the Russian gas that transits through Ukraine to Europe – up to 32.6 million cubic meters per day – according to the operators.

Gazprom has received no confirmation of force majeure or disruption of operations at Sokhranovka or Novopskov, company spokesman Sergey Kupriyanov said on Tuesday. He added that Ukrainian specialists have had full access to both facilities all along, and there had been no complaints about it previously.

Kupriyanov also said that Gazprom has been notified by Ukraine’s gas company Naftogaz that if Russia continues to supply gas through Sokhranovka, Kiev will reduce the volume at the point of exit by the same amount, effectively confiscating the gas.

While OGTSU has proposed to reroute the gas to Sudzha, a connector located in the Sumy region and controlled by the Ukrainian government, Kupriyanov said this was “technologically impossible.”

“The distribution of volumes is clearly spelled out in the cooperation agreement dated December 30, 2019, and the Ukrainian side is well aware of this,” he said.

Gazprom is fulfilling all of its obligations to its European customers, with all the transit services in accordance with the terms of the contract and paid in full, Kupriyanov pointed out. Moscow has continued gas deliveries to Europe, including transit through Ukraine, regardless of the ongoing military operation and the embargoes against Russia imposed by the US and its allies in the EU.

Why Ukraine is doing this is beyond my understanding. On its face, it doesn't seem to make any sense at all.  In fact, it's literally ABSURD! You can't even make up shit like this!

The Ukrainians are cutting their own throats; shutting off gas to the very countries keeping them afloat.

But one thing appears instantly clear: Any support Ukraine has from Europe, will likely dry-up as fast as the gas flow.

Europe will collapse economically without Russian gas, and the fact that Ukraine is the reason the gas flow is being halted will not be well received by its European "partners."

If Europe is smart, they will tell Ukraine, no more weapons, no more money, no more military intel.  Europe and the USA should then tell Russia "We're very sorry that this whole thing happened, we had no idea Ukrainians were so crazy.   We're ending all sanctions immediately, returning all seized funds and property, turning back on your access to SWIFT.  As for Ukraine, go ahead and have-at them,  it's not our concern anymore.   Oh, and by the way, can you start turning on the Nordstream 2 pipeline, we need to get that up and running as fast a s possible."

Russia will grind the Ukraine into dust within days.

This whole debacle will be over and the grown-ups in the room can start to rebuild relations that have been so soured over this thing.

This is a gigantic development for Europe, and very bad, too.

Could Ukraine being twisting European arms for more money and more weapons?   Could Ukraine actually be blackmailing Europe, maybe withholding gas flows until Ukraine gets the money and weapons they want?  Only time will tell.