Britain Collapsing Under Energy Costs; 6 in 10 Factories May Be Forced To Close 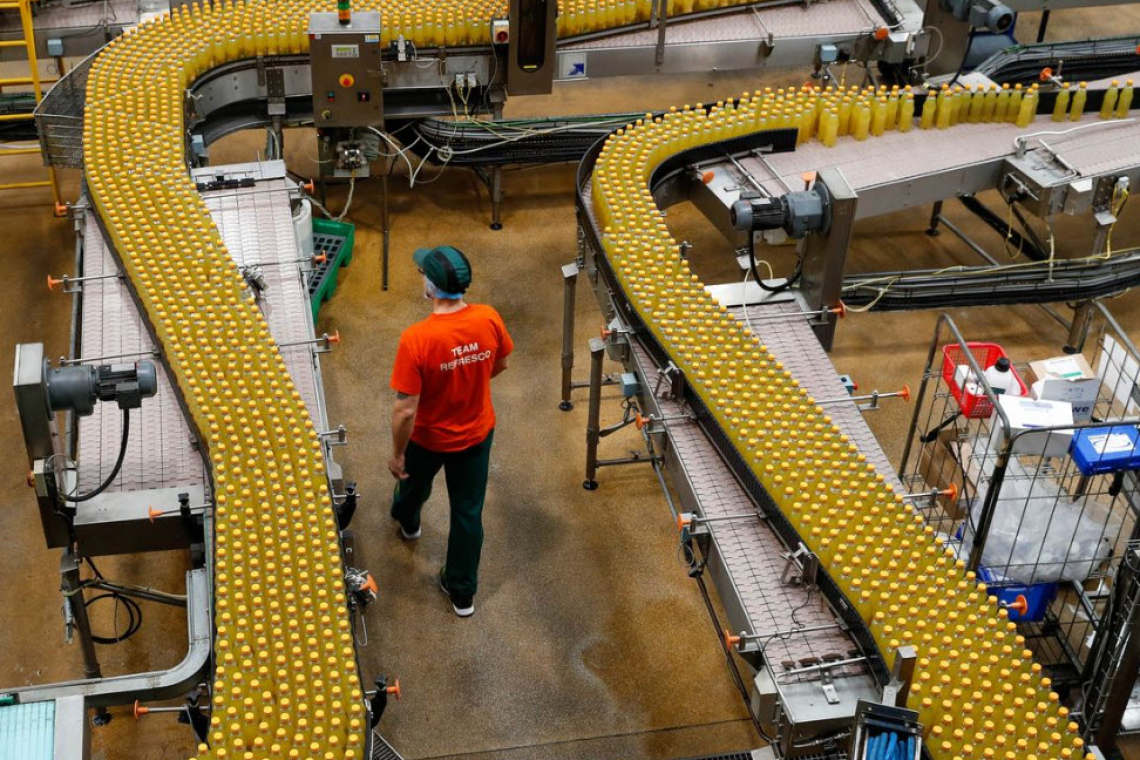 Soaring energy bills are threatening to put six in 10 British manufacturers out of business, according to a survey that lays bare the extent of the crisis facing the next British prime minister.

MakeUK, the lobby group for UK factories, said that nearly half of manufacturers have experienced a jump in electricity bills of more than 100% in the past year.

“The current crisis is leaving businesses facing a stark choice,” the report said. “Cut production or shut up shop altogether if help does not come soon.”

The UK’s new prime minister will be announced on Monday, with Liz Truss expected to beat Rishi Sunak, her rival in the Conservative Party leadership race. The government is under intense pressure to announce a wider package of support to help consumers and businesses cope with an unprecedented surge in global energy costs.

Britain’s factory sector is already in decline, according to a purchasing managers’ index published by S&P Global this week. MakeUK’s survey said that 13% of factories now have reduced hours of operation or are avoiding peak periods, while 7% are halting production for longer stretches.

“Emergency action is needed by the new government,” said Stephen Phipson, MakeUK’s chief executive officer. “We are already lagging behind our global competitors.”

# RE: Britain Collapsing Under Energy Costs; 6 in 10 Factories May Be Forced To Close — jrd803 2022-09-05 22:46
Mercedes Benz has a solution for high electricity costs for electric vehicles.

Kippis
# But ... but ... — The Infant Phenomenon 2022-09-05 18:44
... everything will be so GREEN ... !
+5 # This means? — Woulf 2022-09-04 20:00
They stop food and household goods production. Keep producing anti-tank systems and weapons at a higher cost to the taxpayer. Then give them all to Ukraine. When the taxpayers get "steaming mad" they can stay "warm" all winter.
+1 # Amazing ... — The Infant Phenomenon 2022-09-05 18:48
... what a positive attitude can do!
+7 # UK Imploding — HuskerMike 2022-09-04 16:18
Now you know why they are upping the ante in sending long range missiles to the Ukraine. They know they will be landing in Russia and Crimea. They are self destructive, know they are drowning and going down for the 3rd and final time, and likely to be the country who will force Russia into their nuclear option against the West. Be on your knees in prayer brothers and sisters.
-4 # Christians Only: Pretend Ypu're God — Dolph 2022-09-04 15:57
We all agree the seals, trumpets and bowl judgments happen through the coming seven year tribulation. We agree their are Jews, Christians and unsaved Gentiles currently on the earth. We lastly agree that the true Church is saved, made righteous by the blood of Christ by faith, not works. We also acknowledge there is a rapture/resurrection of the saved coming before, during or after the tribulation. We also acknowledge the Jews are not saved, killed Christ and all the prophets (1Thes.2:15), lost their temple, Jerusalem and country in 70 AD after 1600 years of mostly rebellion against God despite all of God's miracles on their behalf.

Now, you are playing God and writing future His Story. Where would you, a just, righteous Judge, put the rapture of your bride? The ones you bought with your precious blood when you hung on the cross for six hours at Calvary? Before the tribulation, in the middle or the end of the tribulation? Would you put your "body of Christ", the Church, through the horrors of the tribulation or the antichrists, 1John 4:3, who crucified you?
-3 # Short Answer, and correction — barberio 2022-09-05 02:19
From Mt. 24:21-22: "For then there will be great tribulation, such as has not been since the beginning of the world until this time, no, nor ever shall be. And unless those days were shortened, no flesh would be saved; but for the elect’s sake those days will be shortened."

"The elect" refer to Christians, so I'm going with mid-tribulation.

Considering that Jesus and the apostles were also Jews - first referred to as Christians later in Antioch - it would be more accurate to state that the Jewish religious leaders at that time (Caiaphas the high priest, and other Pharisees) were responsible for compelling Pilate to crucify Christ, because Jesus was a threat to their authority and teachings.

IMO, Rev. 7 refers to the rapture, beginning with 144,000 Jews, then a great multitude of Christians.

Again from Mt. 24, consider that the beginning of sorrows and subsequent tribulation are just tests - final exams - of our character and faith.

3. If you are saved there is no need for further testing, the blood of Jesus is sufficient. The bigger question remains, are you really saved?

I don't think God would allow his people to be without leadership. When you think about Moses, because of his sin at the Rock of Meribah, he was not allowed to enter the Promise Land with the Isrealites, he could see them enter from afar, but he died outside. My point is that God wasn't going to leave the people leaderless in the time of the End. So it would make sense that the Spiritual Guides would remain through the Tribulation, some of them might be martyred along the way, then the remaining ones will be transformed in the twinkling of an eye and be brought to heaven.
# All that stuff in Revelation — The Infant Phenomenon 2022-09-05 18:52
happened a LONG time ago.

Their final solution.
+3 # good — rugerwild 2022-09-04 13:06
better there than here f the brits
-6 # "Guns & Bullets Are Useless" — t.n.kuss@hotmail.com 2022-09-04 11:16
People must start "Praying the Power of Our Lord God Almighty and Heaven (2/3) to Bind the (1/3) Biden Administration, Congress, Supreme Court, Obama, Trump, Chinese President Xi, President Putin, and All Others of the Fallen that They CANNOT ORCHESTRATE NUCLEAR WAR OR FORCE MARK OF THE BEAST VACCINE!" This is "Urgent." Tell others to start a Prayer Chain "Otherwise the 1/3 Shall Destroy God's Creation on this Earth" because "You Have Freewill" and "MUST INVOKE THE POWER OF HEAVEN (2/3) TO BIND THE POWER OF THE FALLEN (1/3) ON THIS EARTH." This is "CRITICAL!
-4 # Must Start With The Basics: You Must Be Born Again — Dolph 2022-09-04 12:37
Are you a child of God? Are You born again? Many believe there is a god and hope they are one of God's children but have never made an effort to make sure they are saved or born again. Here are the basic steps to become a child of God:

1.Recognize you are a sinner and that sin is rebellion against God who is holy. God gave man rules, His laws for successful living and becoming one of His children, salvation. There are over 1,000 laws in the New Testament but we are not saved by keeping the law. But when you are saved, born again, God writes His laws in your heart/spirit and that gives you the desire to keep His laws which result in the most good for the most people.

2. After learning what sin is one must repent of all their past sins and make a serious effort to stop sinning with the help of the Holy Spirit who will lead and guide you when you are born again.

3. After recognizing you are a sinner one must recognize and accept Jesus Christ as the "way, the truth and the life" and that "no one comes to the Father except through Jesus" who took the sins of mankind upon Himself at His crucifixion and by believing this with your whole heart/being you must accept Jesus as your personal Lord and Savior to be saved and on your way to Heaven at the end of your life on earth.

5. Find a Bible believing church that takes the Bible literally. This isn't always an easy thing to do but generally a Baptist, Pentecostal or evangelical church is a good place to start. WARNING: Very few churches believe the whole Bible in today's liberal world but making the Bible the final authority in your Christian walk is imperative.

6. Keep in mind we are living in climatic times when a seven year tribulation period of God's judgment is about to begin ending with the returning of Jesus Christ to set up His kingdom on earth. One must be a very serious Christian to make it to the end which is really the beginning of Christ's reign on earth after the tribulation which could start this month. No one knows exactly when but Bible prophesy suggests it is imminent.

7. Find a born again Christian friend to help you get on track with God. This was just a very brief explanation of how to become a serious Christian but you will have many questions and a serious Christian friend would be a real help. Remember, Jesus said, "You must be born again." There are many cults and liberal churches that don't believe this. Run from them. God bless your new adventure to eternal life with Jesus Christ!
-17 # RE: Must Start With The Basics: You Must Be Born Again — Eddamnit 2022-09-04 13:28
Christianity is a bastard religion, they serve Satan.
+2 # Good job — SBGlett77 2022-09-04 13:14
.
You are right, Dolph - God resists the proud but gives grace to the humble. Britain and many other countries are nurturing their prideful spirit, not humbling themselves under the mighty hand of God. These hard times are only the result of that.

Intentional internal breakdown by a few assholes who think they own the current politicians and the people they think are sub-human.

A pandemic (so called) hits the earth.

A manufacturing and distribution crisis emerges.

A weather crisis of extreme drought pops up all over the world.

A banking crisis developed with threats of a cashless central banking system to be implemented..

A political and war crisis as politicians around the world ignore the crisis points and focus on WEF/ UN goals and plans.

A weather crisis of extreme drought pops up all over the world.

Those three things happen during every Grand Solar Minimum. But the last GSM was the Maunder minimum (1645–1710). The current one is the Eddy GSM.

Even FedGov says this:

These people are not gods. They do NOT have limitless power. And the tide WILL turn back because THAT'S WHAT TIDES DO, Brainiac.

This is NOT the end of the world. It IS the end of industrial society that depends on fossil fuels. But people will do what people do best--ADAPT.

There is an untoward number of commenters here with a bona-fide victim mentality.

YES, lots of people will die, but that's another thing that people do.

But if you ADAPT, you will be all right. We shall lower our living standards, yes, but we are NOT going to eat bugs.

Honestly! Are THAT many of Hal's readers nothing more than frightened children??

THINK
+7 # Very sorry. — Gulfcaptain 2022-09-04 08:57
Very sorry for your people. I know that you are "subjects" as a person living in Brittan. However, if it's any comfort, we here in the USA are now subjects too. The free world is gone. We are given the illusion of choice. Two party systems are a scam. Chose one or the other makes little difference as the larger globalist agenda is followed. Banking families run the show. Poverty and war is what they desire now. A "reset" is needed. A reset of population, finance, governance and countries. War is the quickest and most efficient way of attaining their goals.

We are all targets now to this agenda. It's humanity against the cold, calculated, evil mindset of globalist slave masters. Like a farmer who decides that the herd is too large and expensive goes out to thin the flock.

For God's sake and YOURS--GROW a pair and stop telling us that we are all doomed. We are NOT doomed, and the world is NOT coming to an end!

Translation: A turd from the government sold me a Rolex. It turned out to be a cheap fake. It doesn't run. It's stuck at midnight. The turd said the government would fix it. Grow a pair and stop worrying.
Refresh comments list
RSS feed for comments to this post
JComments
by sur.ly
100% Trusted Informational Platform Website 2021