BULLETIN  3:08 PM EDT, Sunday, 18 September, 2022 -- My former colleagues in the Intelligence Community during my years with FBI Joint Terrorism Task Force have sent me images of Chinese Army Units entering Ukraine from Russia.

The images -- and some video which is still being analyzed -- show a small convoy . . .  very small; of general military transport-type trucks, and some smaller vehicles akin to HUMVEES, traveling via public roads from Russia into Ukraine.

These are the images I am able to release so far: 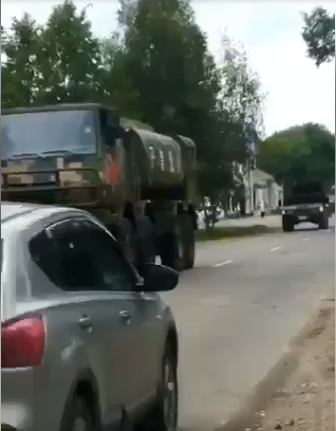 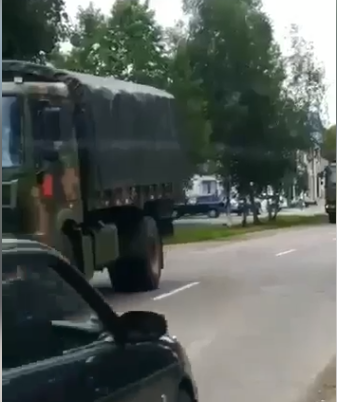 The Red placard on the driver-side doors is the Flag of China. 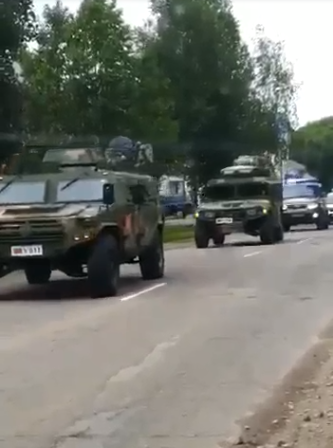 This simple, small, act, changes the ENTIRE dynamic of the Russia-Ukraine situation.   Ukraine, the USA, the UK, and all of NATO, have just found out that China is now an active participant, and came in on the side of Russia.

The stakes in this situation just went so high, they went completely off the charts.

It is no understatement to say this is an earth-shattering development.

With this single, small, almost insignificant action, China has just announced to the whole world that it is now militarily standing with Russia, inside Ukraine.

It seems to me that we in the USA and our European vassal state "partners" ought to get the message, and get it quick: I personally perceive the message to be "Either this Ukraine nonsense stops now, or open warfare between all three nuclear-armed super-powers is now on the table."

When I reported this, it occurred to me that it was only 72 hours ago that I reported to all of you:

As part of that report I detailed to you (among other things) the following:

Li Zhanshu is the head of China’s legislature: the Chairman of the Standing Committee of the National People's Congress. He’s Number 3 in the rigid hierarchy of the CPC. A VERY big fish.

So where was Mr. Li last week?

Well, at the Eastern Economic Forum in Vladivostok, Russia. He met and talked with Russian President Vladimir Putin.

Li also had a key meeting with Russian State Duma (The Russia Legislature) Speaker Vyacheslav Volodin - and other Duma leaders.

This is what he told the Duma. Pay VERY close attention:

"We see that the United States and its NATO allies are expanding their presence near the Russian borders, seriously threatening national security and the lives of Russian citizens (…) "We fully understand the necessity of all the measures taken by Russia aimed at protecting its key interests” (…) “We are providing our assistance.”

How explicit is that?

Well, China's President Xi Jinping and Russia's President Putin will have a special meeting on the sidelines of the Shanghai Cooperation Organization (SCO)  Samarkand summit tomorrow.

They will discuss Russia's Special Military Operation (SMO) in Ukraine IN DETAIL. Especially the next steps.

Then, afterwards, we may be able to ascertain what Li meant when he said, “We are providing our assistance.”

Here we are, just 72 hours later, and we are now beginning to see exactly what Mr. Li meant when he said "We are providing our assistance" to Russia.

Consider also, that China gave no hint at all about what they were about to do.  No "warnings" no ultimatums to the US or to Europe.   They simply showed up in Ukraine, entering through Russia.

THAT . . . said absolutely everything that needed to be said.

This is no longer the US/EU/NATO versus Russia.   This is the collective West versus (now) two nuclear-armed superpowers.

What Russia lacks in naval resources, has just been made up by China.   What China lacks in Hypersonic missile technology, is more than covered by Russia.

What are we going to Draft into the military, those blue-haired/Green-haired/purple-haired freaks with ear lobes stretched by rings?  How about the ones with piercings through strange parts of their bodies?    Maybe the feminized soy-boys who lisp?

How about those "trans-sexuals" who can't even figure out their own sex by looking down the front of their own underwear?  Maybe they'll twerk against the Russian and Chinese troops . . . . might cause them to laugh til they die?

How about those pronoun dingbats; maybe we can draft them to fight?

OK. OK, maybe I'm being a little too hard on the left.  Maybe we can gather up all those folks camping out on the big city streets because they're now homeless.  THEY know how to "rough it" and maybe they can enlist and fight.  Except that the reason they're on the streets homeless is because of the drugs they take to avoid reality. Heroin. Methamphetamine. Fentanyl. Oxycodone.  All to avoid the reality shaped and created by . . .  Liberals.

See what I mean?  We're so fucked it isn't funny.  All thanks to Liberals and Democrats.

We should tell Ukraine, "We've done all that we can do, there can be no further Aid from the US, the EU or NATO.   Negotiate as best you can with Russia.  Best of luck."

Because if we do or say anything else, we are literally at Armageddon.  Full stop.

All it took to get us here was the stolen 2020 Presidential Election.  Much thanks to the Democrat Party and to traitorous Republicans who were so fixated on Trump, they forgot what the rest of the world might do once we were weakened.

All they cared about was ousting Trump.  They never - not even for one second - thought about what message it would send to the world that a U.S. president could be ousted by voter fraud, the U.S. Congress would rubber stamp that fraud with a wink and a nod, the U.S. federal Courts would reject all the law suits over the fraud, and the American people . . . armed to the teeth . . . would fail to step up and slaughter the people who did this.

Oh well, water under the bridge at this point.

Look what our stolen election and American's failure to act has now gotten us.  LOOK at what the Democrats and traitorous, selfish, self-centered Republicans - the frauds in Congress and in the courts, did.

As you read this, our nation is now literally staring down the barrel of two nuclear super-powers moving their military into direct military confrontation with the Ukraine thing, and telling us, our dominance is over.   It sure looks to me like either we quit what we're doing, or it's nuclear war.

Way to go Democrats.  You stole an election for a dementia-addled weakling, and surrounded him with book-worm, pencil-necked nitwits, who had no real world experience, and no idea what they were getting us into through their woke weakness.  You empowered the very people who ordered our military men to wear red high heels to learn what it feels like to be a woman, and who forced experimental gene therapy on them, as a phony vaccine, which has sickened, weakened or killed a slew of them.

You tucked tail and ran out of Afghanistan, leaving behind $85 BILLION of our tax money, and a whole slew of high tech weapons for our enemies to sell to the highest bidder, so they could reverse engineer them, learn to jam them, or to duplicate them.

You pit one half the country against the other half by calling "MAGA Americans" a "force" that represents "an extreme threat to the country," while you bring "Drag Queen Story Hour" to little kids, allow criminals out without bail, defund police, halt our oil and gas drilling, and our pipelines, then embargo Russia so that OUR oil and natural gas (which we now have to import) triples or more in price, wreck the economy, and then get us into a war over the smelly armpit of Europe: Ukraine.

Worst of all, our sissy-mary-infested government and the mental weaklings of the left, are taking us all into the abyss and these Democrat/Liberal/Progressives - all of whom are mental weaklings - can't figure a way out.

So they are in "Denial" because they're incapable of admitting they were wrong, and they laugh-off Russia (and now China) claiming those two countries are merely "posturing" because that's what liberals do.   They can only think as THEY THEMSELVES actually are.   And one thing is certain: Democrats/Liberals/Progressives entire lives are only "posturing."  They've never done anything real.  Everything they do is virtue signaling because they lead empty lives of zero accomplishments.

If this wasn't so tragic, it would be laughable.