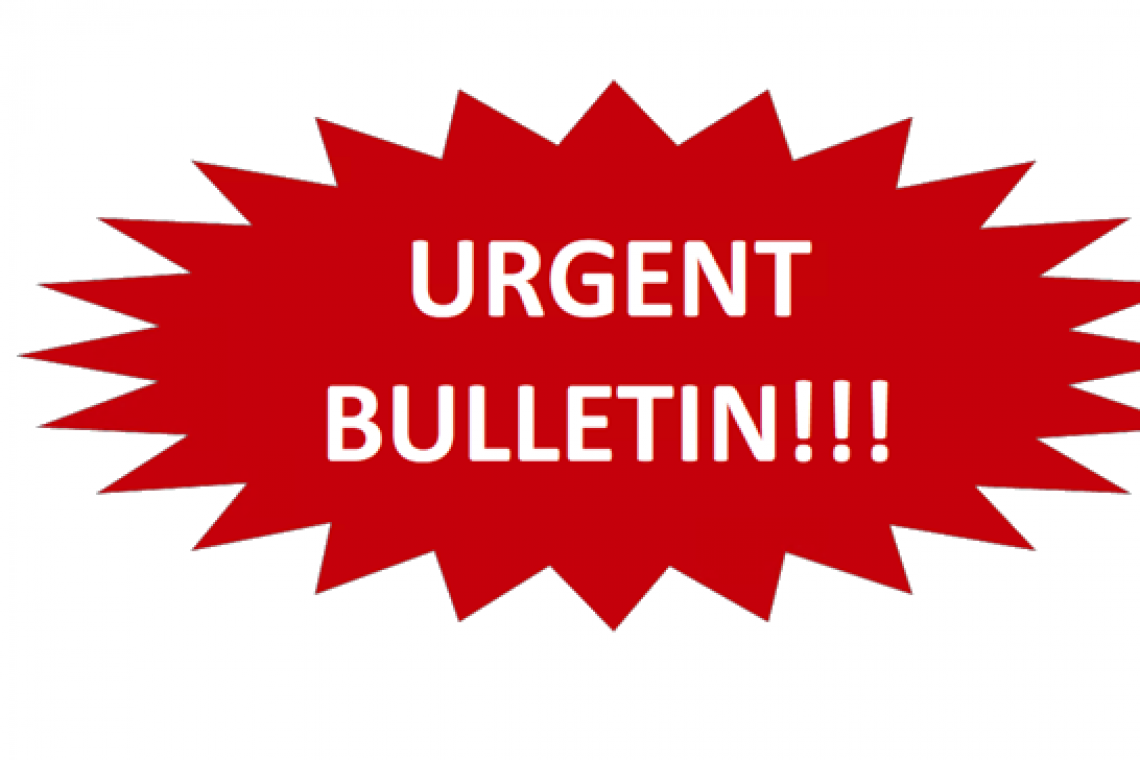 Terrible developments are taking place in Russia with horrifying implications for the world. Tomorrow, the Russian Federation Council, their version of a Senate, will vote on, among other things, MOBILIZATION and Martial Law.  President Putin and Defense Minister Shoigu is to make a televised address to the Russian nation tonight. 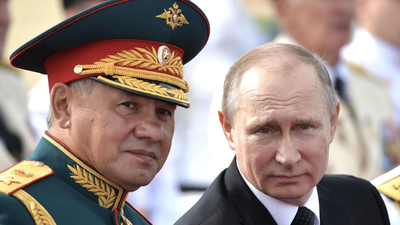 Meanwhile, NATO Headquarters in Brussels seems to be finally realizing they have already gone too far with their "aid" to Ukraine.  Today, the chairman of the NATO military committee, Admiral Rob Bauer, said that "despite the supply of weapons to Ukraine and financial assistance to it, the alliance is not at war with Russia."

(HT Remark: Really?  Sounds like a case of saying too little, too late.   After the things that NATO has done, Russia already has a Casus Belli to blast them all to hell.)

In both the Luhansk and Donetsk areas, a public Referendum about asking Russia to Annex their territories to become part of Russia is already being set up.  Luhansk & Donetsk want immediate referendums to join Russian Federation! Russian-backed officials announced planned referendums for Sept. 23-27 in the Luhansk, Donetsk,  and -- just announced -- Kherson and Zaporizhzhia provinces, representing around 15% of Ukrainian territory or an area about the size of Hungary.

If they vote to join Russia, and if Russia passes legislation accepting their ascension into Russia, then those territories will become "Russia" and what NATO is presently doing by helping Ukraine  attack those places, will become a "war against Russia." Hence, the vote by the Russian state Duma, tomorrow, about MOBILIZATION.

Jens Stoltenberg of NATO, has already, today, publicly stated that NATO will "not accept" the annexation of Luhansk and Donetsk into Russia . . .  as if he or NATO has any say in the matter at all.  This was echoed by Jake Sullivan at the White House who said Washington and its allies would reject any such referendums, which he said would bring Russia no benefits on the battlefield.

Step-by-step, the world is moving toward actual World War 3.  Lest anyone doubt that, earlier today, Russian Foreign Minister Sergei Lavrov said publicly "The time is coming hard, the war with NATO will be protracted. Billboards with the popularization of Suvorov and Nakhimov schools should replace the posters of the Pugachevs and Galkins. And jesters and minstrels will not be translated in Russia. Just do not make a cult out of them, and then they will become just entertainment, and not a tool for throwing yeast into the flour mass."

Pugachev was a rebel and Czar impersonator during the early 18th century.
Galkin could be an actor.
Sovorov was a military commander during the late 18th century. He won the war against Poland (Poland was eliminated in the result) and won two wars against Turkey (Crimea was wrestled from the Turks, territories in the Caucasus were occupied, Russia became protector of all Orthodox Christians in the Ottoman Empire and the Ottoman Empire was close to be divided between Russia and Austria)
Nakhimov was the greatest Russian admiral of all times, circum-navigating the globe, taking part in the Greek War of Independence, burning the Turkish fleet during the Crimean War, leading all land and sea forces during the siege of Sevastopol.

In addition, Russian President Vladimir Putin is holding a meeting with ALL of Russia's "Military-Industrial-Complex" in the Hall of Catherine the Great, inside the Kremlin as seen in the photo below: 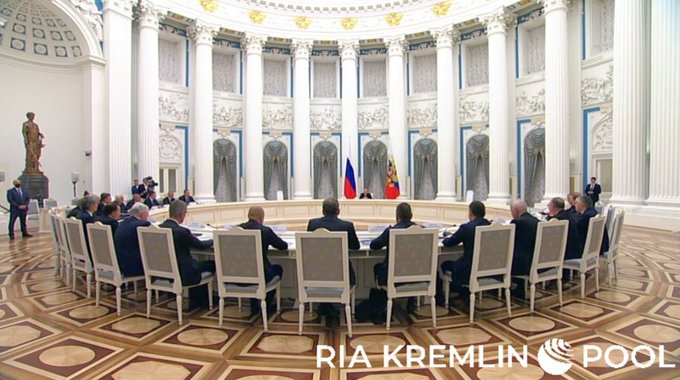 Step-by-step, the world is actually moving . . . deliberately . . . toward World War 3.   The next few days seem critical.  It does not look good.

For all the latest details, be sure to tune-in to the Hal Turner Radio Show tonight at 9:00 PM eastern US Time (GMT -0400) eithe via radio or here on the Internet as follows:

Or here on the Internet at this link:  http://stream.halturnerradioshow.com:8000/  (Click LISTEN or hit the right arrow on the player to start the audio - - that link DOES NOT GO LIVE until about one hour before the show.   During that hour, it streams commercial-free music until the show starts.)

I'm not picking a side.......but our host has.
These (Russia/Ukraine) are THE 2 most corrupt ountries in Europe.

They both
1) SO deserve the bed they made for themselves
2) HAVE NOT EVEN realized they;re both America's bitch in this 'war'

They'll both be states in name only when this is done.
New rulers. New borders.
+1 # CUE THE ALIENS — PSKYWAY 2022-09-20 22:40
WILL THEY STOP NUKES?
+2 # RE: ***BULLETIN*** Russian Federation Council (Senate) to Vote on "MOBILIZATION" Tomorrow; Defense Minister Shoigu to Address the Russian Nation Tonight — DAVID MAAS 2022-09-20 21:50
HAL, PLEASE CONSIDER, THAT INSTEAD OF THIS WORLD PREPARING FOR "WWW3" IT COULD WELL BE PREPARING FOR GODS FINAL JUDGEMENTS AGAINST THIS EVIL, BLOOD SOAKED EARTH. AND THE ABSOLUTE FINALITY OF OUR LORD JESUS CHRISTS RETURN TO EXACT ARMAGEDDON!!!
+1 # Does this mean... — sixshots 2022-09-20 20:32
A formal declaration of war is imminent?
+3 # Possible time of Putin's Address — J Grayman 2022-09-20 17:38
"Citing two sources, @ForbesRussia says Putin's pre-recorded address will be aired when the country's "Far East wakes up." Kremlin pool journalist Dmitry Smirnov says the address will be at 8am Moscow time -- The Guardian correspondent"

https://www.zerohedge.com/geopolitical/referendums-set-series-ukraine-regions-national-mobilization-being-pushed-through
-1 # RE: ***BULLETIN*** Russian Federation Council (Senate) to Vote on "MOBILIZATION" Tomorrow; Defense Minister Shoigu to Address the Russian Nation Tonight — Lambs Servant 2022-09-20 16:05
Following. September 24 might very well be a blowout.
# Sept. 24 — Gardengrown 2022-09-20 20:00
Can someone please explain what is predicted to happen on Sept. 24th? Thank you
+4 # From Telegram — Seemorerocks 2022-09-20 15:49
It is reported that Putin will not speak today, but tomorrow.
They also report that mobilization will not be announced today.
+6 # Anita — D. Anita 2022-09-20 15:44
All of "THIS" as those who have been redeemed by the blood of JESUS watch Rash Hashanah approach. MARANATHA
+4 # Meeting is TOMORROW — Seemorerocks 2022-09-20 15:30
I just saw from Vladimir Soloviev, Putins confidante, on Telegram, the meeting will be TOMORROW.
+1 # Speech — ell 2022-09-20 15:06
Evidently Putin is about to give a speech. Sky News on YouTube is carrying it.
-37 # Prophecy — John Jones 2022-09-20 14:57
The Russians will lie and steal the land. They will give gold and riches to their Wagner Nazi mercenaries. They will let the Muslims rape all Christian women. The Russians will let the North Koreans wear the skin of the dead. The Chechen Muslims have sworn demonic oaths to Putin, and he has promised them they will drink the blood of Christians.
+4 # Prophecy — chip 2022-09-20 17:51
Who the hell are you kidding,, you aint
Dimitru Duduman any more than i am.
-35 # Prophecy — John Jones 2022-09-20 15:07
Putin is gathering all evil to him now. He can feel the surge of evil power and is becoming Gog. His eye is fixed on the Ukraine for now, but he will move his evil forces onward to drink the blood of all good peoples.
+7 # Your choice of User ID.... — LindaN3 2022-09-20 16:38
Is one that inflames your words against you. It also revolts all good persons as you pretend to write ‘prophecy’, but then again, simple discernment bares you for what you are...another in a looong line of trolls that have and/or are on this site. Go find a Bible, read the words of Jesus in the New Testament, and May you find True Light.
-15 # Prophecy — John Jones 2022-09-20 16:44
I'm sorry that you pray to Putin and worship his Wagner Nazi mercenaries. His Chechen Muslim's will rape you while his North Korean slaves eat you. Repent now and do not worship the nexus of all evil in this world.
+7 # Your views... — LindaN3 2022-09-20 17:10
Are most scewed. I pray to the Lord God of heaven, in the name of Jesus Christ His Son. Yes, there are Muslims fighting for Russia, but Russia is fighting for Orthodox Christianity, and thus the reason they are hated by the satanic West. They set up a Nazi, satanic government in Ukraine which has and is gleefully killing Russians and certainly Christian Russians in Ukraine. But then you know that since you are on this site. You only wish to sew discord and Despicably use the name of a true man of God to do so.
+7 # The United States and Nato pushing for Total Annihilation — Garyhines 2022-09-20 14:51
These ignorant bastards who are pushing for Total Annihilation especially the United States who seems like they are above the law.who acts like they can do whatever they want to these other countries.but no one can do anything to the United States. Yeah it's going to be real laughable when the United States gets hit with Thomo Nuclear. I wonder if that would change their minds to not be trying to start any more wars . doubt it seriously.
+3 # RE: ***BULLETIN*** Russian Duma to Vote on "MOBILIZATION" Tomorrow; Defense Minister Shoigu to Address the Russian Nation Tonight — almachius 2022-09-20 14:47
Matthias Stormberger (1830)

Hold on, didn't Donetsk and Luhansk already vote on secession from Ukraine?
So this is a new vote to join Russia?

"When in the Course of human events, it becomes necessary for one people to dissolve the political bands which have connected them with another, and to assume among the powers of the earth, the separate and equal station to which the Laws of Nature and of Nature's God entitle them, a decent respect to the opinions of mankind requires that they should declare the causes which impel them to the separation."
+7 # RE: ***BULLETIN*** Russian Duma to Vote on "MOBILIZATION" Tomorrow; Defense Minister Shoigu to Address the Russian Nation Tonight — Eddamnit 2022-09-20 14:23
"Meanwhile, NATO Headquarters in Brussels seems to be finally realizing they have already gone too far with their "aid" to Ukraine. Today, the chairman of the NATO military committee, Admiral Rob Bauer, said that "despite the supply of weapons to Ukraine and financial assistance to it, the alliance is not at war with Russia.""

#Breaking Live from the White House: Tomorrow at UN in New York, Biden is going to make the proposal that Russia Gets kicked out of the United Nations UN

According to the Bible 1/3 of the worlds population will die. That’s into a couple of billion.

Where can I find it written; 1/3 of the WORLD population?
+8 # RE: ***BULLETIN*** Russian Duma to Vote on "MOBILIZATION" Tomorrow; Defense Minister Shoigu to Address the Russian Nation Tonight — ebelfer52 2022-09-20 13:55
the photo makes it look like a private lecture.. this is what is to happen type meeting, not a what do you think
Refresh comments list
RSS feed for comments to this post
JComments
by sur.ly
100% Trusted Informational Platform Website 2021