Central Banks around the world risk having their main banking offices hit with Russian missiles if they cut Russia off from the Society for Worldwide Interbank Financial Telecommunication (SWIFT) Banking system, as some countries are endeavoring to do.  Such is information LEAKING out of Russia Saturday and is NOT yet "official."  Says one Russian, "If the Banks want to wage war against Russia, they should expect war to be waged back upon them - personally - in the buildings where they work."

Inside Russia, plans are being reviewed as to what response the nation might make if the West "attacks" Russia economically.   Russian President Vladimir Putin was explicitly clear during his speech wherein he announced Russia would be moving to de-militarize and de-nazify Ukraine: "Anyone who interferes will have consequences the likes of which they have never seen in history."  Hitting central bank buildings with precision missiles would likely fit that description.

President Putin's exact quote was "“I would now like to say something very important for those who may be tempted to interfere in these developments from the outside. No matter who tries to stand in our way or all the more so create threats for our country and our people, they must know that Russia will respond immediately, and the consequences will be such as you have never seen in your entire history. No matter how the events unfold, we are ready. All the necessary decisions in this regard have been taken. I hope that my words will be heard.”

Such action by Russia would, of course, be considered an act of war by the nations wherein the banks are actually hit.   But a war breaking out between NATO and Russia has been ALMOST a foregone conclusion since the Russian operation began.

Putin, in an earlier speech after a 6 hour meeting with French President Macron made clear: "The military capability of Russia to NATO is incomparable.  (Meaning NATO is superior) We know that.   But Russia is also a nuclear power.  And our capability is superior to many others in this area.  If the West engages Article 5 (NATO mutual defense), you will be drawn into a war with Russia without your consent. It will be a war that no one will win (Meaning an actual nuclear war, which is the only war that most everyone agrees "cannot be won and must never be fought."). President Macron doesn't want that.  I don't want that.

Here is video of President Putin saying it:

So Putin has already laid out the cards for the whole world to see.  If the West persists in interfering with what Russia is doing, it not only may trigger a direct response with missile strikes against the Banks, it may unleash actual nuclear war.

Last night, Russian TOPOL-M intercontinental ballistic missiles - nuclear missiles - were moving on Truck Launchers around Moscow and on highways moving toward Europe.  Photos and video of those nuclear missile movement appears below:

This news below was provided to Subscribers to this web site BEFORE you folks in the general public are being given it now, so that my Subscribers could have the information first, and make preparations first.  There are very real-life benefits to being a Subscriber to this site, and now you're seeing exactly what that $1 a week subscription means!  FOr a buck a week, MY subscribers got this news 12 Hours BEFORE you.  THEY could make plans while YOU could not.  Maybe you should subscribe too?  Click HERE for Subscription options . . . or stay blissfully unaware that nukes are on the move and your main stream media isn't telling you.

Terrifying new photos and video have came out of interior Russia showing road-launchable TOPOL-M intercontinental ballistic missiles (ICBM's).  The TOPOL-M is a nuclear missile with a single warhead of 800 kilotons (800kt) and a range of about ten thousand kilometers (10,000km)

The photo below shows one such missile (of several in this particular group) moving on the highways immediately outside of Moscow, Russia. 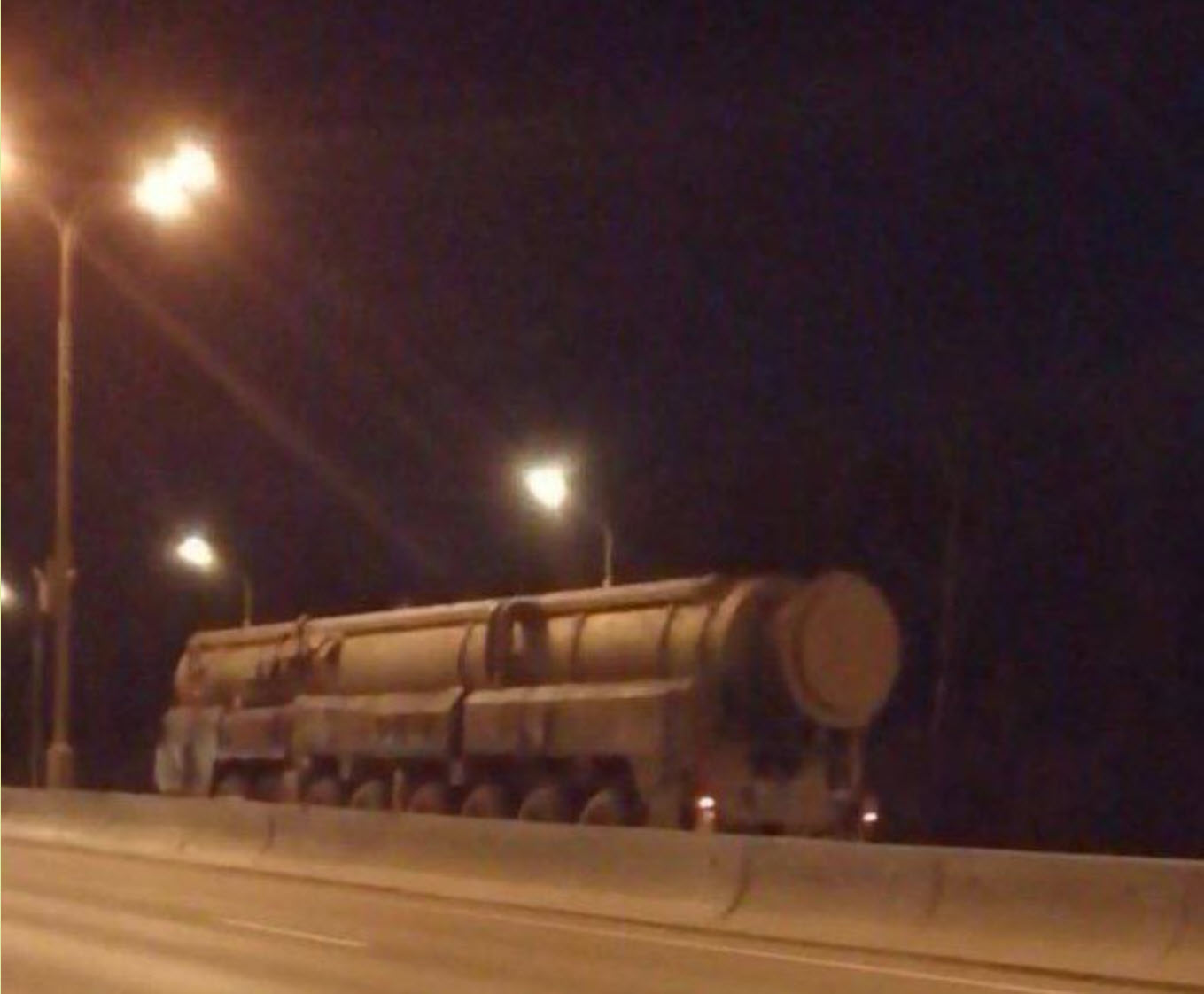 Video below shows a number of additional TOPOL-M missile launcher trucks, driving west on a major highway, moving toward Europe/Ukraine.

The fact that these missiles are OUT IN PUBLIC, and moving, should be all you need to know about where this Ukraine/NATO trouble is actually heading.

As we saw with the Russian troop build-up around Ukraine, Russia does not bluff.  When they move military gear, they intend to use it.

We are now in grave danger from the shenanigans our governments are pulling with Ukraine.

YOU absolutely must have emergency preps: Food, water, medicines you need to live on, a way to generate electric to keep the food in your refrigerator from rotting, fuel for that generator, a way to generate emergency heat and fuel for that method.   If you have a fireplace or wood burning stove, clean it out, make it ready and for God's sake buy a few Cords of wood for fuel.  Have portable radios for news and information (Shortwave AM/FM are best), Flashlights for every member of your family, and plenty of spare batteries for all of it.

UPDATE 6:10 PM EST -- My son was driving home from work tonight, on Route 495 eastbound (the road that goes into the Lincoln Tunnel to NYC 3 miles farther ahead) just about 1/4 mile from our exit.  I live on the road where you see the biggest building to the right; I'm about 1/2  a mile further up the hill to the right of that building.

My son just wanted to show me the heavy traffic he was in.   What __I__ saw was the cloud formation over New York City.   Does that look like a glowing Mushroom cloud to you?   It does to me.   An omen? 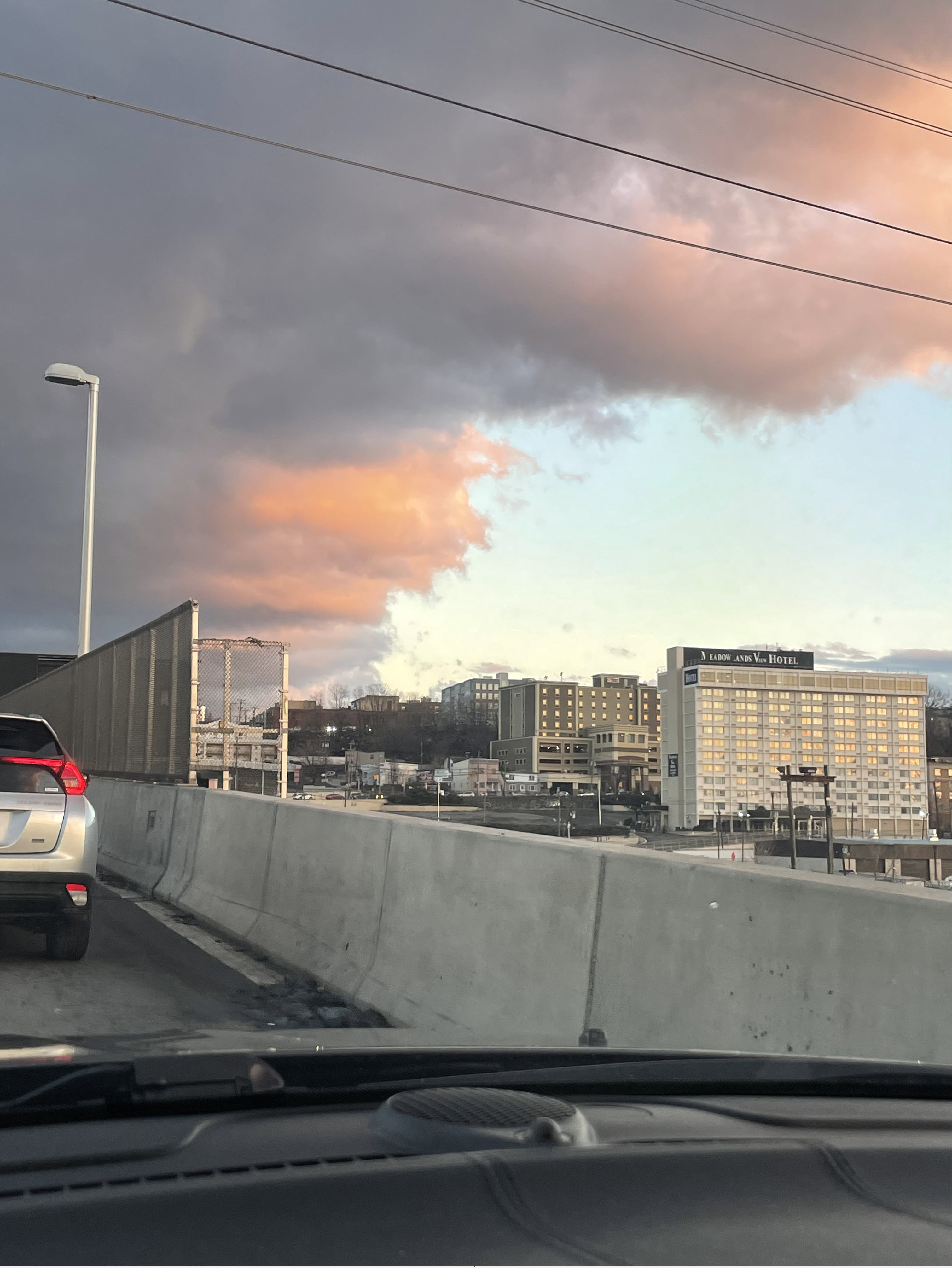 People in Russia are starting to upload videos to social media.  Here's at least THREE MORE TOPOL-M nuclear missiles on the move:

the Russian Topol-M ICBM equipment being moved around the Western Russia territories
1 pic.twitter.com/k0LqOArOyC

And even MORE!  These on the "Ring Road" around Moscow:

From the Russian Foreign Ministry Friday night: Russia is approaching the point in its relations with the US beyond which there is no return.

Whether this converts into Russia firing missiles into the Central Banks that ban it from SWIFT, remains to be seen.  Clearly they wouldn't have to do that to ALL central banks, just to enough of them that the rest decide living is more important to them.  And if they start to see their Banker pals blown up, many people think the rest would choose life rather than choose making economic war on Russia.   It's just a matter of how many Bankers have to get killed before the rest stop their economic war.

⚡️⚡️⚡️ Foreign Minister Kuleba reports that the process to disconnect #Russia from #SWIFT has begun.