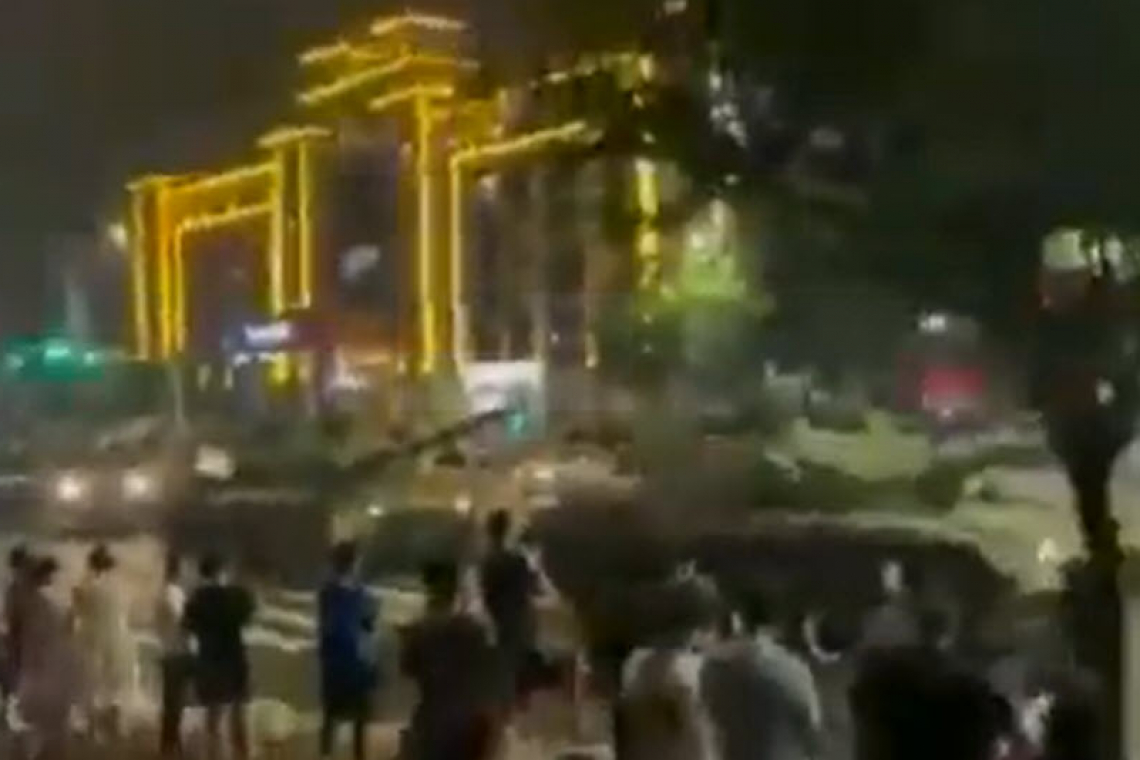 The China Communist Party deployed tanks overnight, to protect the Bank of China branch in Henan Province from the ongoing Bank Run.

Some of the Banks in Henan Province "froze" the accounts of Depositors back in April and have refused since then to allow any withdrawals of funds.

Yesterday, it was announced by the bank that people's SAVNGS "are now INVESTMENT PRODUCTS and can't be withdrawn."

Yes, you read that right.  In short, it looks as though the bank simply STOLE all the depositor's money to cover the bank's bad business practices, bad loans, or outright theft,  and now the Communist Party has sent tanks to prevent people from storming the bank.

Here is video of the tanks arriving at the banks in Henan Province, China:

The Only out of The CCP financial Collapse is WAR , Soon The CCP & Their Communist Allies ( including Russia ) will Start WW3, In fact they already have.

They have no choice, they have to start a war. Otherwise all the people whose money was stolen by their Jewish banksters are going launch a civil war to get their stolen money back!
# Chinese banks are run by the same Talmudists (Rothschilds of the East ie Sassoons banking dynasty) who run our banks — Haarnaś 2022-07-21 09:46
The same banksters run our banks, so expect to get your bazookas next timer you go there!
+4 # In 2012 the Bank and England and the FDIC — wardoc 2022-07-21 09:41
put out a white paper articulating the idea that bank deposits were not deposits but they represented something akin to stocks; thus so called depositors were really stock holders with the typical risks (also last in line in a bankruptcy). Several years later, the US congress voted almost unanimously (I think only Cynthia Mckinney voted against) to put into law that white paper's ideas. They are in effect NOW!! Suprise, surprise
+1 # my mistake, it was 2006 — wardoc 2022-07-21 09:45
nm
+2 # If anyone wonders... — wardoc 2022-07-21 09:42
what the BOE and FDIC have to do with each other, look up the ownership of the Federal Reserve and the administrators of the FDIC.
+8 # RE: China Deploys TANKS to Protect the BANKS - People's Life Savings Stolen! — Gunner 2022-07-21 09:01
All of these governments are rotten, rat bastards that deserve to HANG. US Govt is really no better.
# "America Deploys Propaganda" — t.n.kuss@hotmail.com 2022-07-21 08:45
Instead of Tanks, "America Uses Propaganda" to "Protect the Federal Reserve Banking System" which "Works Much Better."
+8 # Nordstream — Atomic Scout 2022-07-21 08:39
Russia resumes natural gas flow to Europe. Doomsday scenario didn't happen.
+1 # cry peace & safety — Beetlepumpr 2022-07-21 13:13
when things are good and men cry peace and safety then comes sudden destruction.
# RE: cry peace & safety — Beetlepumpr 2022-07-21 13:16
Quoting Beetlepumpr:

when things are good and men cry peace and safety then comes sudden destruction.

Putin: Revolutionary Changes to World Order Are Coming Retired US General Petraeus predicts that Russia will use nuclear weapons on Ukraine. Russian Foreign Minister Lavrov said weapons from the West have changed the rules of the war. And Vladimir Putin predicted that revolutionary changes are coming to the world order.
Rick Wiles, Doc Burkhart. Airdate 7/20/22. https://www.trunews.com/stream/putin-revolutionary-changes-to-world-order-are-coming
# RE: Nordstream — mjc 2022-07-21 09:32
Quoting Atomic Scout:

"Around 0700-0800 local time, Russian NatGas flowed through the biggest pipeline into Europe at roughly 40% capacity, the same level before flows were curtailed to zero for ten days of planned maintenance.

"We are in the process of resuming gas transportation. It will take several hours to reach the declared volumes," Nord Stream 1 said."
+1 # Population 1.4 Billion — supporttheblue 2022-07-21 08:37
95 million CCP members. How’s that communist party working with all of you peaceful folks without guns? Pick up a spade, hammer, pitchfork or something and unite.
+4 # Gives you a wonderful feeling inside . — Garyhines 2022-07-21 08:10
Hi Hal gives you a wonderful feeling deep inside that China is deploying Tanks on the streets of China . wouldn't be shock if that was happening here in the not to distance future Hal. Oh let's not forget Nancy The shunk face Pelosi is going to Taiwan hope she doesn't buy knowing her she will be going to Taiwan .No telling will happen after that.Hal .such a wonderful government we Hal.
+8 # All western banks — Jessiebeaner 2022-07-21 08:09
Changed their rules for what we used to refer to as depositors.
Several years ago the bankers changed the definition of YOU and your money placed within their banks.
YOU are now a CREDITOR and your money is now a LOAN TO THE BANK.
Both Lynette Sang and Catherine Austin Fitts discussed these changes after they were made.
As a creditor you will STAND IN LINE, AT THE BACK OF THE LINE, if your bank becomes short of money or insolvent.
# RE: All western banks — Beetlepumpr 2022-07-21 13:21
Here at the Chinola Commiecal Bank we strive for your personal safety. Of both you and your deposit Never a burglary at Chinola, we will blast you away with the great interest rates, as our interest rates are just that, OURS!
+3 # Not just a "loan" to the bank..... — LilBirdie 2022-07-21 08:34
You are deemed an unsecured lender to the bank! That puts you behind derivative! They are considered secured!
This happened in '08 when the banks had to be bailed out.
Not surprising Hillary had a hand in it as secretary of state.
# All western banks — Jessiebeaner 2022-07-21 08:10
ZANG not sang.
Refresh comments list
RSS feed for comments to this post
JComments
by sur.ly
100% Trusted Informational Platform Website 2021