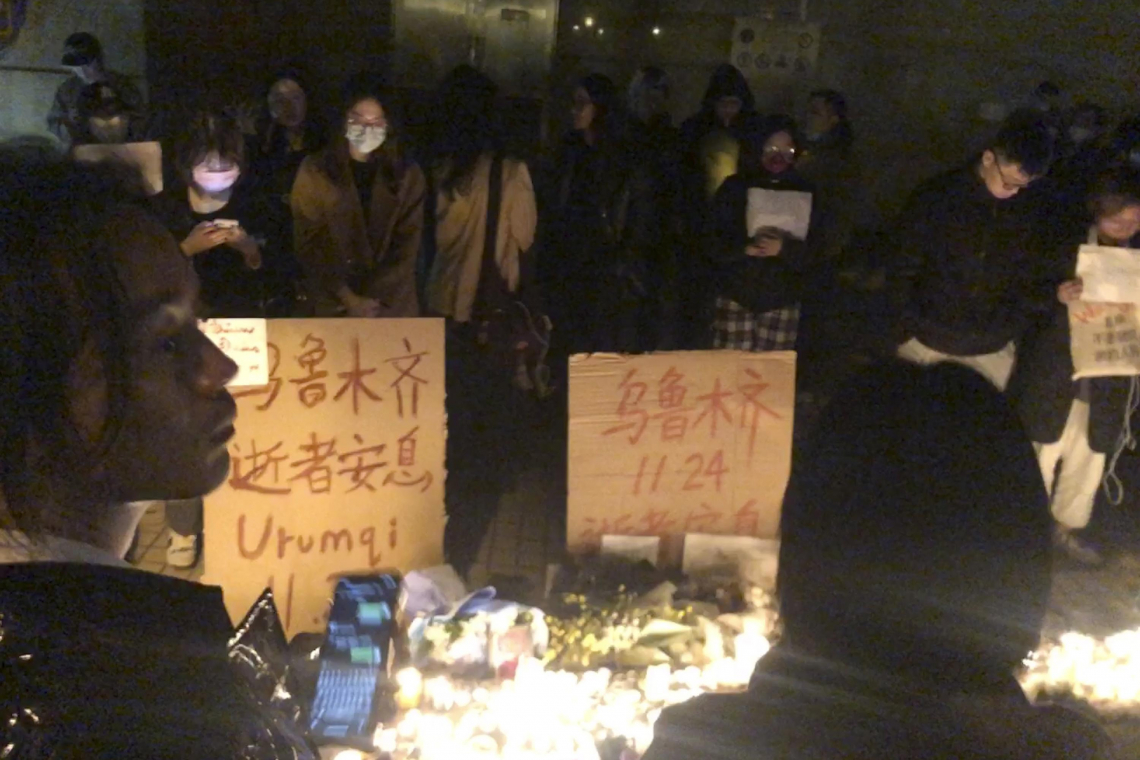 This weekend, China has suddenly erupted in severe social chaos, violent protests, and open criticism/defiance of the China Communist Party (CCP).  The world has not seen anything like this inside China since Tiananmen Square!  More amazing, it is not localized; protests have erupted in very many cities around the entire country.

It apparently began after a high rise fire caused multiple deaths when residents of the building could not evacuate because of doors LOCKED in relation to "COVID."

It rapidly spread on social media "WeChat" but citizens saw the social media giant censoring all information and blanking-out calls for protests.  THAT caused more anger, countrywide, and people began taking to the streets.

This is almost unheard-of behavior by the Chinese people.

As word of the successful displays of public anger spread, more people took to the streets in more places.  The rhetoric got . . .  well . . .  amazing - for China.

Citizens began chanting "CCP Step Down" - a direct challenge to the China Communist Party.  Then, even more amazing, open calls for "Tyrant Xi Jinping - Step Down"

In a stunning public speech, one man set the tone when he publicly said "Give me freedom or give me death" - an American phrase uttered in the 1700's by Patrick Henry who said, of King George III, "Give me Liberty, or give me death."

As of 6:09 AM Sunday morning here in metro New York City, things in China are degenerating very fast.  There is major social chaos.  There are major protests in very many cities.  Authorities are deploying thousands of police, but it is not having the desired effect; things are just getting worse.

One of the worst-kept secrets in global central banking is the extent to which Chinese officials are swapping dollars for gold. Governor Yi Gang’s team at the People’s Bank of China (PBOC) isn’t admitting as much. The PBOC doesn’t have to, though, given the clear policy trajectory Chinese leader Xi Jinping has pursued in recent years: internationalizing of the yuan as the top rival to the dollar. Xi’s position hasn’t changed so much as other governments are catching on that trust is waning in the global reserve currency and an alternative to the dollar is badly needed.

So with China making moves against the U.S. Dollar, it may actually be a case where the U.S. is stimulating social chaos inside China to destabilize what the PBOC is doing.

# Leaked Footage From Inside Chinese Covid Camp!! Remember China Is The Model For The Great Reset So Please Pay Attention!! November 28, 2022 — MildB 2022-11-28 08:31
https://www.ournewearthnews.com/leaked-footage-from-inside-chinese-covid-camp-remember-china-is-the-model-for-the-great-reset-so-please-pay-attention/

Telegram groups set up by Chinese-based associates of Radio Free Asia, Epoch Times, the NYT, CNN, and others are organizing "protests" which are essentially PR stunts meant to trigger much wider unrest.

This comes at a time just as the US-backed Democratic Progress Party lost in elections in Taiwan.

The BBC doesn't do journalism. They meddle under the guise of "journalism."

The protests were being organized by "journalists" associated with Western media organizations (via Telegram) in the first place.

In 2021 the Grayzone exposed the BBC & Reuters taking covert funding to carry out influence operations against Russia: https://thegrayzone.com/2021/02/20/reuters-bbc-uk-foreign-office-russian-media/

Clearly the BBC does this globally and obviously China is the most important target of US-UK subversion.

Now going back to listen to their story.....

IT SEEMS THAT THE COMMUNIST CHINESE WANT FREEDOM MORE THAN THE AMERICANS THAT I AM SURROUNDED BY!

Here is the channel for the South African:
https://www.youtube.com/@serpentza

.
I wish i could remember these 2 guys names.
They both lived in China and did their own YouTube Channels for 10 years.

Tang ping (lying flat) and Bailan (let it rot) are words describing Chinese sentiment of daily life especially for the young adults. The youth have given up on the prospect of a fulfilling life. So they do the minimum to get by. This frustration + the lock downs have pushed all the Chinese people to raise hell.
Are we seeing a re-enactment of the “Tienamin Square” protest?
When this happened in 1988, I wondered if the Chinese government would fall. It didn’t.
The protest lasted until military units from outside the local area were brought in and fired upon the protesters. Any survivors were arrested and imprisoned, re-educated or exterminated.

This should be a lesson to any possible resistance to our beloved leader (Mr. Sniffles) in a possible future time. The national guard most likely won’t fire upon the populace, but beware of deployment of active military or the blue helmets. They probably will pull the trigger.

The 1988 protest in China fizzled out, but the human spirit of freedom has smoldered since. Now the spirit has risen again and I do believe it has the power to bring down their tyrants. The Chinese commie bastards in the government have lost the “Mandate of Heaven”.

On the other hand, the murderous devil worshipers currently occupying our houses of power, probably won’t need to deploy armed force against the sheeple. The peoples demise by “needle” is well underway. The “bread and circuses” mode needs to last just a bit longer. Then it’ll be an easy task to round up the pure bloods and eliminate. Maybe enough steeple will wake up and turn it around. Our collective spirit hasn’t ignited yet.
+4 # Minute 10:30 — icanseeclearly 2022-11-27 08:09
The moment when the crowd breaks through the chains of mind control aand start thinking for themselves and others is beautiful.
+1 # Which is it? — MissinD60s 2022-11-27 07:41
I wonder. I hear Clif High report that there are hundreds of riots againat the CCP, annually. These two gentlemen report that they've not seen any riots for decades.

Which is true? If ever an evil regime needed to be toppled. China's CCP is it. I still remember when Tiananmen Square went down. I pray for this revolt's success.
# Kidding? — Nda 2022-11-27 13:27
You're worried about china? Kidding, right?

quote name="MissinD60s"]I wonder. I hear Clif High report that there are hundreds of riots againat the CCP, annually. These two gentlemen report that they've not seen any riots for decades.

Which is true? If ever an evil regime needed to be toppled. China's CCP is it. I still remember when Tiananmen Square went down. I pray for this revolt's success.
+8 # Oh My Lord...Strength to the Chinese people please. — Lexie 2022-11-27 06:40
I hope Jin Ping does not resort to outright murder. At last, the Chinese are standing up for themselves and at a time when tyrants Soros and Schwab are stating how China is their role model, it could not come at a better time. Dam those companies who have moved to China like Apple and Nike and seem ever so willing to adopt the philosophies of the communist party in exchange for cheap labour.
+2 # RE: Oh My Lord...Strength to the Chinese people please. — Gunner 2022-11-27 07:18
It's so damn pathetic - most are fighting back except the impotent do NOTHINGS here in America!!! Seriously WTF is wrong with us guys?
# RE: Oh My Lord...Strength to the Chinese people please. — Nda 2022-11-27 13:43
Seriously

quote name="Gunner"]It's so damn pathetic - most are fighting back except the impotent do NOTHINGS here in America!!! Seriously WTF is wrong with us guys?
+3 # God is moving. — Moosie850 2022-11-27 06:30
Who knows how this will turn out. Usually not very well, but on the eave of potential invasion of Taiwan… you could hope, The People, make the necessary changes to their government.
Refresh comments list
RSS feed for comments to this post
JComments
by sur.ly
100% Trusted Informational Platform Website 2021