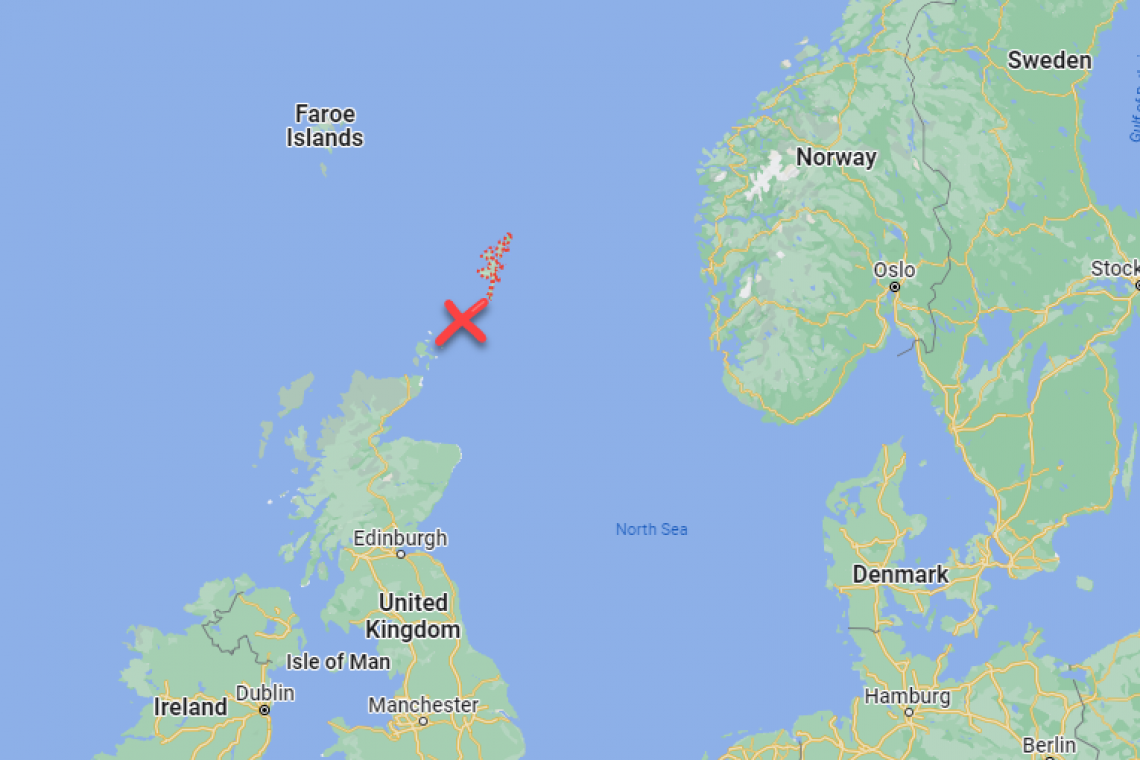 Communications to the Shetland Islands, UK, have been severely disrupted after a subsea cable was "damaged."

Police have declared a major incident after the south subsea cable between the islands and the mainland was cut.

The force said some landlines and mobiles were not usable and that officers were patrolling to try to reassure residents.

Repairs to another cable connecting Shetland and Faroe are ongoing after it was damaged last week. 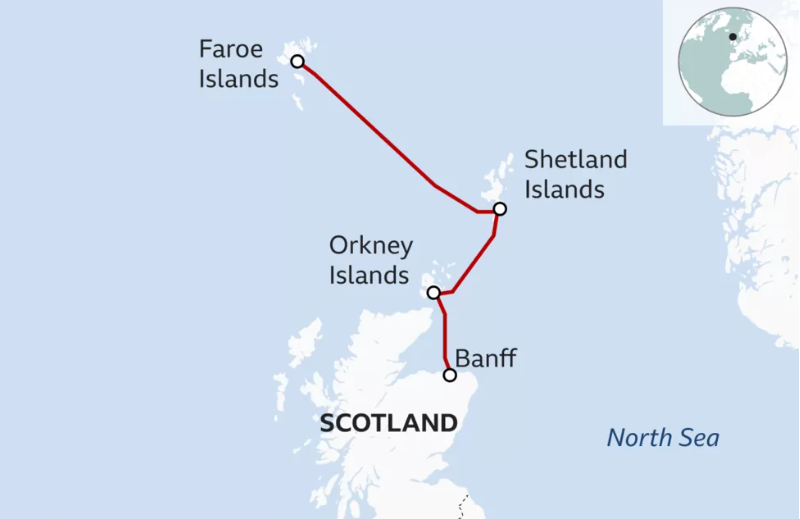 First Minister Nicola Sturgeon said it was an emergency situation for the island.

The Scottish government's resilience committee had met and was working with partner agencies to ensure support was provided, she added.

She said the assumption was the damage was accidental, adding: "There is nothing to suggest otherwise, but work is continuing to assess exactly what the cause of the problem has been."

MP for Orkney and Shetlands Alastair Carmichael told the BBC he had raised the issue with the UK government, but understood it could be days before communications were restored.

He said the priority was fixing the issue but that resilience would also need to be looked at in future.

Nordstream had three points of destruction.

Someone is making a statement?
# Comparative scales — Paul Lambert 2022-10-21 05:14
Cutting off some small Scottish islands and the Faeroe Islands from their digital communications is rather meek in comparison to blowing up a gas pipeline between two very large countries.

"I see the angel Gabriel standing in my room with the same two angels in heavy armor... He begins reading from a golden scroll, 'The times of trials and testing has arrived. It has begun. It starts right now for your world. The judgment of a guilty verdict has now been passed to earth's inhabitants for failure to repent...judgment has come to full fruition. The time of Tribulation has now come upon your world, let it be known of this time, horrors upon horrors for your world shall last 7 years of the calendar of your world today.

Hear o inhabitants of the earth as Satan's Man of Sin takes his place, the Lawless One, as rightful ruler of your world. A reward for your ill-gotten seeds of sin you have sown so freely.

Seven years of anguish, desperation and woes as My anger falls upon your world, says JESUS CHRIST, the RISEN LAMB whose sacrifice for the sins of mankind gave all a way to escape.

HEAVEN'S COURT by the GREAT GOD JEHOVAH now declares, in a few short days your world shall enter the Tribulation period. Upon your world 3 1/2 years of anger those left on the earth will feel from the RISEN LAMB's hands. Then 3 1/2 years of wrath."

The full message is here: https://444prophecynews.com/another-official-proclamation-from-the-angel-gabriel-vicki-goforth-parnell/

Have you made Jesus your Lord and Savior? Repented of your sins? Are you led by the Spirit of God?


I could say the same without claiming a message from God simply from reading
news sites including this one.

The rest of your post is simply a rehash of the Revelations and common sense.

Hey Dolph, how about you present us with this
woman's track record for her successful
statements over time. You know, just a little
hint of credibility in the midst of her palm
reading stature.

"And many false prophets shall rise, and shall
deceive many."
Matthew 24:11

Lame.
-1 # Pale Pony It's Time To Read Your Bible — Dolph 2022-10-21 01:05
God's sheep hear His voice. Maybe you are one of those children that believes that the days of miracles are over for some reason. It's hard for me to imagine anyone that ignorant unless they're not a Christian. Are you a Christian? Jesus said, The things I do you shall do also and greater things. Or maybe you don't have enough faith. Faith comes by hearing and hearing by the word of God. Again, it sounds like you haven't studied or even read much of the Bible. Or, you could be in some odd ball cult.

Paul explains the Church has a five-fold ministry: Pastors, teachers, evangelists, apostles and prophets. Sounds like you have been hanging out with the wrong crowd, those with little faith. Start by reading Acts 2:17-20 I posted below. That's how a pale pony grows up to be a pale horse. Of course, some paleponys never grow up. (sigh)

You probably don't realize you are committing the unforgivable sin, blaspheming the Holy Spirit. Prophesizing is one of the nine gifts of the Holy Spirit, 1Cor.12:1-10. When you become a teenager maybe someone will teach you these important lessons. I might not always be here to help you out. Now, go back in your room until I tell you you can come out. You're a bad palepony.
-1 # █▓▒░ Pick A Card... Any Card... ░▒▓█ — Palehorse 2022-10-21 09:47
|

I know those verses well. Just because this woman
has a platform and gains a "following" does not
mean she is hearing from God.

Hey Dolph, how about you present us with this
woman's track record for her successful
statements over time. You know, just a little
hint of credibility in the midst of her palm
reading stature.

"And many false prophets shall rise, and shall
deceive many."
Matthew 24:11


As I said "where is proof of her credibility?"

As I said "I could say the same without claiming a message from God simply from reading
news sites including this one." And you are a joke.

So what you are saying is that this woman has
no credibility and all you have are your childish
antics.
+3 # Thanks, Dolph — SBGlett77 2022-10-20 20:17
.
Something to take to the Lord in prayer. We certainly know we are a nation and world that has forgotten God. God keeps His promises.

Romans 8:14 - one of the most ignored, yet most essential, verses in the Bible. We only are given one spiritual leader, and it's not a man or woman. The rest are only there to share God's Word with people, and let He, the Spirit of Truth, lead people to truth with it, instead of those people embellishing it with their private interpretations.

18 And on my servants and on my handmaidens I will pour out in those days of my Spirit; and they shall prophesy:

19 And I will shew wonders in heaven above, and signs in the earth beneath; blood, and fire, and vapour of smoke:

I wonder what military installations (radar, sat, spy etc.) are located on those islands?

None. They had a Marine station and a radar (both closed) - https://en.wikipedia.org/wiki/Island_Command_Faroes

Spec-op Squirrels, in scuba gear, chewing on the
cables while drinking vodka again.
+6 # Fishing vessel — Skeptikarin 2022-10-20 19:23
I heard it was probably damaged by a fishing vessel. I live in the Faroe Islands and we are not on bad terms with Russia, I see Russian ships in our harbors almost every day.
+2 # RE: Fishing vessel — joe@tittiger.com 2022-10-20 19:35
small world I had a friend at church who's family came to Missouri from the Farrow Islands.

Them and the US are a bunch of knuckleheads.
Maybe they did it so the word would spread of outages. Then (as someone here mentioned), the powers that be could turn things off and claim it’s more of the same.
+2 # RE: Communications Cables CUT for Portion of UK — Gunner 2022-10-20 18:55
Hmmm well how surprising. . .
Refresh comments list
RSS feed for comments to this post
JComments
by sur.ly
100% Trusted Informational Platform Website 2021