ANOTHER GAS PIPELINE BLOWN UP

Another natural gas pipeline has apparently been blown up.

Reports are now flooding-in of a massive pipeline explosion in (or near) the northern boundary of Kherson Oblast, one of the regions where a recently finished Public Referendum saw that region vote to leave Ukraine and join Russia.

Reports are sketchy right now, and information is hard to come by, but according to maps of the gas line network inside Ukraine, this particular pipeline is likely to be the SOYUZ pipeline from Russia to Moldova, Romania, Bulgaria, and Turkey.

What __is__ confirmed is that there has been a massive gas pipeline explosion inside Ukraine. 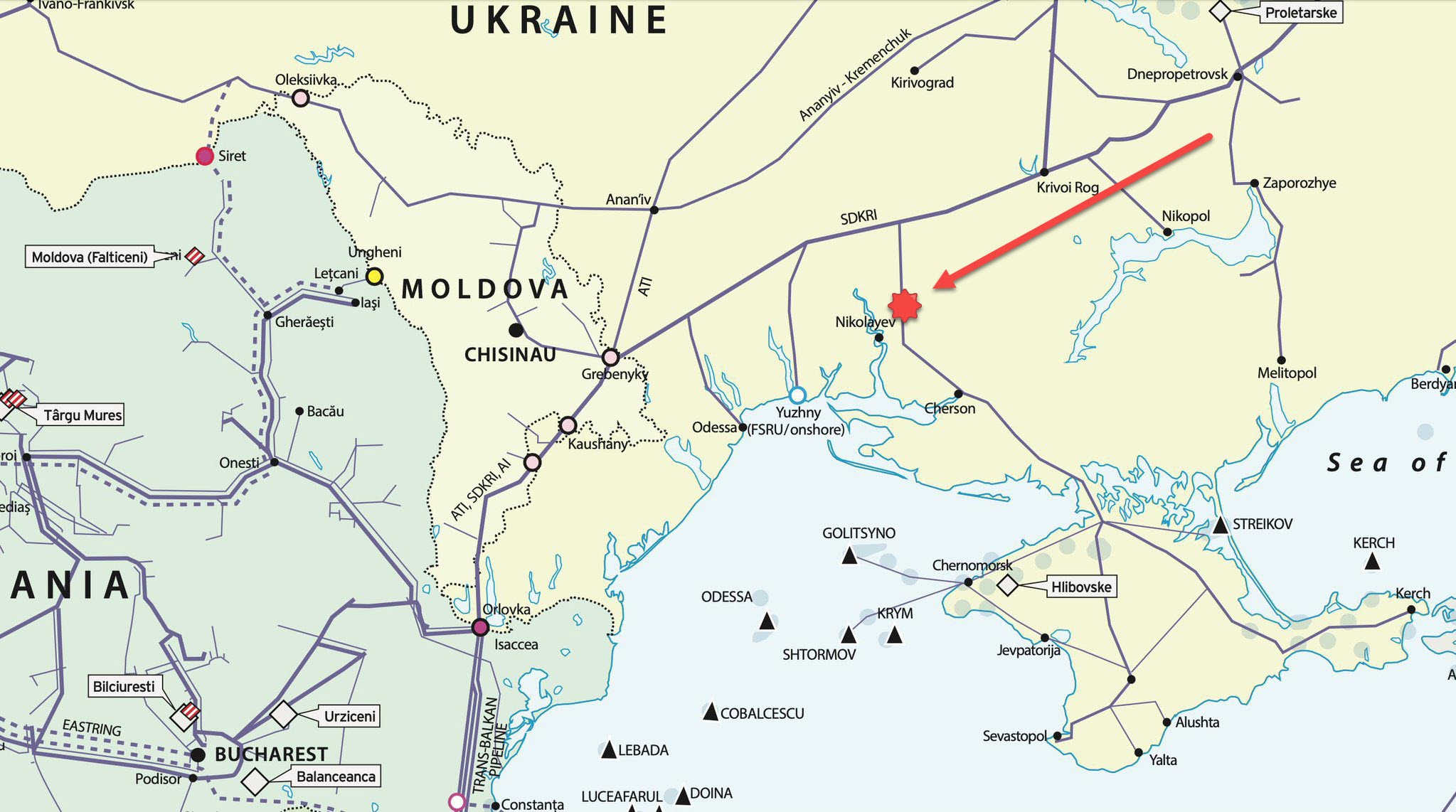 Ukraine blew up the pipeline to Crimea to deprive Crimea of natural gas.

Russia blew up Nordsteam 1/2 to avoid having to payoff the note on a pipeline which THEY DID NOT PAY FOR....but for which they are (were) on the hook to have to pay off.

In each case, the Nordsteam consortia contributed a MINORITY of funding for the pipelines. Members were on the hook for a percentage of costs based on their shares in the consortium. The majority of the funding was then provided by western banks.


Roll forward to Russia 'special military operating' Ukraine.....and Germany refuses to license/permit Nordsteam 2 at all. And then both sides (Russia/EU) progressively imposed sanctions/embargoes which reduced the volume for Nordsteam 1 to the point where Gazprom/Russia could no longer service the Nordsteam 1 note through Nordsteam 1 volume.

Neither currently has.....nor ever will have....the gas volume sale to Europe to meet their note, much less profit.

But clearly....'merca blew them.....which coincidentally got Russia/Gazprom off the hook for paying their note on the pipeline.

I haven't seen a single story today (Sept 29th) about a gas pipeline being blown up toward Crimea.

This is only the 1st crash as there will be another one after it.

Now, Aaron Brickman returns for an intense discussion about
what we might expect next, including “13 days of misery during
the 13 trading days between October 5 and October 21, 2022.

(Starts at the 4 min. mark in this video)

"With the global economy teetering and markets in turmoil –
the recent crash of the British pound and bond market being the latest examples –
central banks are facing an acute dilemma..."

Russia is shelling themselves by shooting at a nuclear power plant that they are sitting in....

Russia blew up their own multi billion Euro pipelines to cut Germany off of natural gas indefinitely (because valves just don't work)...

What a great energy business plan Russia has don't you think?
+11 # Sarcasm — ellis 2022-09-28 20:53
Sarcasm at its finest. Love it.
+7 # Hired? — Gulfcaptain 2022-09-28 20:25
Perhaps the Russians hired Hunter B. to "consult" them in their future oil and gas plans? Blow up your own infrastructure and sit back for the kickback.
+8 # Great posts but be careful — SBGlett77 2022-09-28 20:45
....some people don't get sarcasm.
+2 # Modest proposal — ellis 2022-09-28 20:54
Makes you wonder what these people would think if they really read Swift’s Gulliver’s Travels or a Modest Proposal???lol
+9 # News — Srmay72 2022-09-28 20:03
Redact news on YouTube awesome news but they asked an analyst, YA WE ARE IN TROUBLE! THEN MY OLDEST SONS FATHER IN LAW "LIVED" IN GERMANY EVER SENSE HE WAS IN MILITARY HE SAID HE LEFT Germany FOR PHILIPPINES HE SAID MY SON BETTER BE READY TO DEFFEND HIS DAUGHTER AND GRAND KIDS, SHITS ABOUT TO GET REAL! HES RETIRED ARMY SCIENTIST.
NOW THE ANALYST SAID GERMAN PEOPLE AND OTHER EUROPEANS ARE GOING TO FREEZE BUT THE NORMAL ZOMBIES WONT PUT UP WITH MUCH MORE AND POLITICIANS KNOW IT, SO SOMETHING HUGE WILL HAPPEN SOON.
SORRY ABOUT ALL CAPS MY EYES ARE BLURRY.
# I think you meant — Jessiebeaner 2022-09-28 22:02
Redacted news??????
+2 # Jessiebeaner — Patricia1 2022-09-28 22:21
It's a really good channel on You Tube. REDACTED is the channel name.
+2 # Getting spicy. — Toddsthoughts 2022-09-28 20:02
Nobody invited me to the marshmallow roasting party
# Bonfire — ellis 2022-09-28 20:56
You didn’t see the massive bonfire shitshow? Come on over.
+19 # Secretary Blinken. — Doug Brown 2022-09-28 20:00
Several things have happened almost
simultaneously:
The successful referendum passed.
The destruction of Nordstream 1 & 2.
Followed immediately by Blinken's loud green
light to Zelinski to attack the new Russian states.
All this in conjunction with a massive hurricane
in Florida.
There is existential tension in the atmosphere,
extreme danger and upset lurking.
The kitchen table is about, proverbally
speaking, to get forcibly flipped over.
# Ian is NOT a "massive" storm — The Infant Phenomenon 2022-09-29 10:59
Get a grip!

I never hear any of your men doing anything, Nothing. All I hear are talk talk talk.
Where are the massive protest, The protest against the Vietnam war for example.

It is a pity your country was Great, now it is a shadow.
# Americans are no different — The Infant Phenomenon 2022-09-29 11:14
from anybody else, which means that they/we won't do anything until a certain point is reached. That is true of all people everywhere, right across the board.

Americans will take action once it becomes CLEAR to them that FedGov really does mean to take away their cars. Once the population FINALLY gets that through their thick skulls, EVERYTHING will change. But not before that. Not a moment before that.

When that time cones--and it will--Americans will walk down the street to see their local representative in their state's General Assembly, and they will tell him--in no uncertain terms--to get his ass to their state's capital and FIX THIS SHIT.

At that point, the states will simply turn their backs on FedGov, and they will go their own way. FedGov will spit and sputter, oh, my, yes! But what of it? The people--the whole population AND the state general assemblies (not ALL of them, of course, but if you are reading this, you can make accurate list of the states that will do this and those that won't) will simply turn their backs on DC.

The governors of Louisiana and Texas will get the oil pumping and refining going again. The pipelines (unless the NWO goons have blown them up) will get back into operation, and Washington will find itself all alone (except for the obvious states that will stay with them).

And even if pipelines have been taken offline somehow, the people will take thigs up within their states to get things going again. And FedGov will be left in the same position in which Moscow and the Warsaw Pact governments were abandoned--peacefully--back in the early 90s.

Americans will do what Europeans did at that time. But they will not act until the 11th hour because very few Americans have even the vaguest notion of what is happening, and you can't fix stupid.
+2 # Paybacks? — Steve in Buffalo 2022-09-28 19:53
Already....
+4 # Nah — ellis 2022-09-28 20:57
Bet this was Ukrainians trying to hurt Crimea and Russia.
Refresh comments list
RSS feed for comments to this post
JComments
by sur.ly
100% Trusted Informational Platform Website 2021